All Hail the Working People by Jenny X. '13

Living down the 40-hour work week.

My rest & relaxation days ended in the beginning of July. After waking up at 10:30 AM everyday to nothing but enjoying sunshine, pointless TV, and the company of old friends, I was definitely not looking forward to the alarm ringing at 6:45 AM. I drive an hour to work – which begins at 8:30 AM and ends at 5:00 PM, Monday through Friday. This would be my first taste of the working life.

(P.S. One of my favorite moments of the day is seeing all the people in western business attire standing beside the lonesome bus stops in the middle of nowhere, waiting for the suburban Coach bus that will take them to work. Inspiring!)

I’m interning at ETS – the Educational Testing Service, a.k.a. producer of the SAT, GRE, TOEFL, AP Exams, etc…Yeah. Anyways, I’m not working on the previously mentioned exams, but rather, a newer test called the TOEIC – Test of English for International Communication – a.k.a. English for the business setting.

So…..my job is basically developing test questions for the TOEIC. And for confidentiality reasons, I think that’s pretty much all I should be saying about that. I can’t talk about what goes on exactly, but I will say a couple things I realized about my job and ETS. 1) This is really serious – People take the TOEIC to get jobs, seek promotions, make their lives… 2) This is really hard… a question is not just a question. Now I’m just thinking how in the world the SAT – which has nearly 200 questions – is put together… D: 3) Essentially, ETS may seem like a big blackbox (hahaha first learned this word in 8.02 ), but nothing’s arbitrary. :P

Remember the Sketchbook Project mentioned in my last post? Several people I know have also hopped on the wagon – it’s a movement! So…. I’ve worked on a grand total of…dun dun dun… 1 page. :X I know, I’m ashamed.

I didn’t want to doodle any old thing, so I was waiting for thorough ideas to just come to me. But thankfully, one Sunday morning, I just decided to start something. 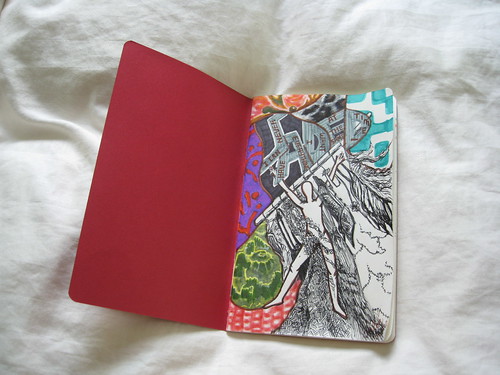 This one’s about how jaded I am about buying things…or just generally, the saturation of material goods all over the place… or the fact that you’re almost expected to “spend” after a “payday” but really – there’s nothing that tempting. Or maybe too many things. O…..KAY

It’s hard to believe tomorrow’s August! There’s still a whole month until MIT begins once again, but for some reason, I’m homesick already.

It’s not that MIT is not exciting – on the other hand, it’s probably a little too exciting. Everything is new and everything is your decision. Everything is A LOT. I just wish there would be more minutes in between to “miss home” and remember where i came from. Don’t know if that made any sense. But this is the “growing-up” we’ve been asking for.

Well, soon enough it’s on to the next world: MIT. Is anyone (ever) ready?

Like in a Sketchbook, it’s gonna take a certain dose of courage to start marking on every new page.

8 responses to “All Hail the Working People”