am I a weeb? please GOD say yes

Hi, I’m your resident weeb. I’ve watched some 60+ days⁠02 if you think these are rookie stats, please hit me up so we can be friends of anime and have read tens of thousands of chapters of manga. I learned Japanese so I could watch shows without needing subtitles. I co-wrote a 200-page self-insert fanfiction about Haikyuu!!.⁠03 a volleyball anime lol i'm not even interested in sports Hell, I’m listening to anime openings as I write this…

Anime is such a part of me that I wouldn’t actively think about writing about it, but with quarantine prompting my former weeb tendencies to resurface, I’ve started to think about how my relationship to it has changed.

Guys, I straight up didn’t have time for anime at MIT!!! I didn’t watch a single episode by myself—the few series I consumed here and there were with other people, and rarely, at that. So now that I’m home and fangirling intensely over Tower of God⁠04 i have such vivid memories of the few hours i spent binging 400+ chapters of it while in Japan four years ago and playing Anime Music Quiz with my high school friends again, I can’t help but reconsider anime’s presence in my life.

It’s actually really funny to me to live at home since my bedroom is such a clear snapshot of my weeby highschool self; take the sheets of Hunter X Hunter fanart plastered above my desk, or the calligraphy scrolls, or the Inuyasha poster above my dresser. Can’t forget about the Spirited Away⁠05 my favorite movie ever uwu painting hanging next to my bed, or the precarious stack of volumes of Monster on my chest of drawers, either. I’m so surrounded by vestiges of my anime fangirl past that considering how little time I devote to weeb pursuits while at MIT is pretty damn hilarious. like, who am I???

Even in the months leading up to the beginning of my freshman year, I would binge-watch hundreds of episodes of anime with my fellow admits and dedicate quite a bit of time to maintaining the adMIT anime chat (I absolutely was the lifeblood of that group). When I got to MIT, I didn’t have any expectations for the people I would gravitate to, but I ended up with a set of friends with vastly different interests. The people I hung out with before college are so different from those of my current friends, with the exception of maybe five or six people. And anime is barely a part of my life now.

I was curious about whether people think one of my defining traits is weebery, so I asked my best friend from high school (the one I wrote the 200-page fanfic with) and my boyfriend what they thought.

high school vs college: the duality of man

Yeah, uh…all I can say is that everyone at MIT met the me that had already been shaped by years of intense passion for anime and manga. My high school friends, on the other hand, only saw me sink further and further into weeb hell…

Anime is such a core part of my identity. I mean, I obviously dedicated a lot of my time to watching it, but it also shaped my interests and experiences. I had the privilege of being able to travel to Japan and stay with a host family in the summer of my freshman year of high school, and it was such an incredible experience that I dedicated myself to studying Japanese in the years that followed. I studied for and passed the JLPT N2,⁠06 the second most advanced level of the Japanese Language Proficiency Test founded a high school Japanese language and culture club with my sister Nisha, and eventually became a freelance translator and tutor, the primary means by which I stay in touch with the language today.

Given how much of my life was shaped by my interest in anime, it’s a shame that something so intrinsic to who I am has receded as one of my “defining characteristics.” So here I am, screaming my weebhood out to the world. Y’all, anime SLAPS. It’s such a great and versatile medium that can achieve so much. Take movies like Paprika and Perfect Blue that use clever animation techniques to weave together complex storylines and imagery, or to vividly illustrate a character’s gradual descent into madness. What fascinates me so much about such works is that the way messages are conveyed are so subtle, yet so powerful, in a way live-action can’t accomplish.

The suspension of disbelief that anime inherently invokes is great, as well. Made In Abyss, for example, is a show that will subsume you in a fantastical world and then propel you to reconsider your conception of morality. The cyberpunk show Psycho-Pass completely immerses you in an authoritarian future dystopia and raises Black Mirror-esque questions regarding the ethics of a “perfect” society. On a different end of the spectrum, The Disastrous Life of Saiki K, which is the funniest show I’ve ever watched aside from Silicon Valley, is a stellar example of gag comedy that couldn’t be presented as effectively in any other medium. It’s so hilarious guys watching that show validated my entire experience of learning Japanese lmaooo

I’m eternally grateful that I was first sucked into the world of anime as a young, Digimon-loving⁠07 Digimon is better than Pokémon. Fight me uwu seven-year-old, and then again as a 4th grader who fell in love with Inuyasha. So many shows have captivated me since then, and I’m grateful for all of them. 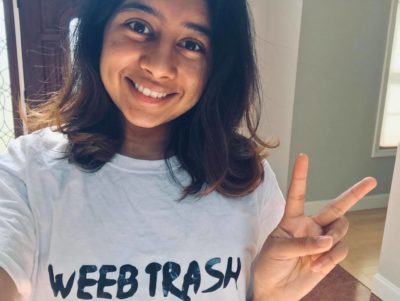 Also, for the record, I outed myself for writing the 200-page Haikyuu!! fanfiction to MIT Admissions and they still accepted my weeb ass, so…don’t suppress who you are, folks!!!

Alright, so this whole “identity” thing was just a thinly-veiled excuse to talk about anime and manga. Here are my favorites:

A psychological thriller about an esteemed neurosurgeon’s decades-long hunt for a serial killer whom he saved as a child. It has tons of seamlessly interwoven storylines that progress slowly, which turns a lot of people off from this show, but y’all, I maintain that it has the best storytelling of any medium I’ve ever experienced. It has incredibly complex story arcs and character development, and at the end of its 74 episodes leaves you with a question that you’ll think about for days, maybe weeks, even. For me, writing 50 pages of in-depth character analyses and overall thoughts wasn’t enough to fully digest the show. IT’S SO GOOD. WATCH IT. OR READ IT, THAT WORKS TOO

A decently long show that starts off as a happy-go-lucky shounen⁠08 anime that's aimed at young boys and ends in a pit of darkness. It’s about a boy named Gon who wants to follow in his father’s footsteps of being a “Hunter,” someone who basically travels the world doing dangerous shit, and also to find said father since he’s a piece of trash who yeeted away from Gon ages ago. The story only really begins after Gon and his friends become Hunters, though; the tone of the first 20-some episodes is so different than that of the rest of the show, so stick with it if you want to experience an incredible story with some of the best characters you’ll ever encounter in anime.

One of those initially slow-moving and then “holy-shit-what-the-fuck-is-happening” shows that you should give a try :) It’s about time travel and the repercussions of messing with the past and has A+ plot and somewhat-tropey but loveable characters.

It’s about some kids who live in an idyllic “orphanage” that turns out to be a farm. Yep, demons are eating them. Think Never Let Me Go by Kazuo Ishiguro, but 8000000x darker. There’s an anime for this that’s pretty great, but I personally enjoyed the manga a whole lot more.

A coming-of-age work that explores matters of the human condition in a raw, compelling way; it deals with topics like depression, social isolation, and sex through the experiences of the protagonist, who is portrayed in the form of a bird. It’s heart-rending and will emotionally devastate you (but you should still read it since it’s amazing)

An intense, incredibly crafted dark fantasy about a mercenary who fights his destiny. It’s so damn good dfodsjoidsjfiodsjfosjf

Talk to me about anime/manga, learning Japanese, studying abroad in Japan, or anything of that sort! I’m always happy to spread the weeb gospel owo