The Making of a Mystery by Chris Peterson SM '13

As you may have picked up from my post about SOPA, I’m an unashamed, unabashed law and policy geek. Before I began working at MIT, I was a Research Assistant at the Berkman Center for Internet and Society, and I still stay active in the policy space through several ongoing projects, programs, and organizations. While some people curl up at night with a copy of Sports Illustrated, or Cosmo, or even Wine Spectator (if you’re a special kind of hilarious), I try to end my days reading journal articles, policy books, and other things full of ideas that tend to keep me up thinking.

Few intellectual mancrushes of mine are as profound as the one I have for Professor James Grimmelmann of New York Law School. Grimmelmann is flat-out one of the most brilliant thinkers what might loosely be called “cyberlaw” today. And, in a landscape strewn with shoddy writing, his articles are breathtakingly well written and fun to read. His Ethical Visions of Copyright Law is an illuminating insight into an otherwise tired subject; his similarly striking Saving Facebook is hands-down the best law review article ever written on the subject of Facebook privacy.

So you can imagine my surprise and delight when Prof Grimmelmann posted a blog entry about the MIT Mystery Hunt last month (as did our own Anna). It turns out that not only did Grimmelmann participate in this year’s Mystery Hunt; as the 2011 winners of the Hunt, he and his team created the challenges for this year’s edition.

I asked Professor Grimmelmann if I could post his entry here as a guest entry, and he graciously agreed. He also pointed me to this LiveJournal archive of many years of many participants of Mystery Hunts past and present. So thanks to him, you may now enjoy some insights into this year’s Hunt from one of its creators.

Take it away, JG! 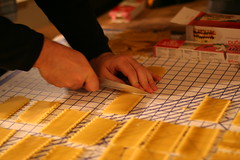 7 responses to “The Making of a Mystery”