As regular readers of this blog know I love to bike. It’s my primary mode of transport when the weather is (reasonably) nice, it’s a great way to exercise. Hooray! Hooray for bicycles!

I’m also very risk averse – my 401(k) is more conservatively invested than my grandmother’s, who admittedly is a baller – so I also love the Charles River Bike Path, which runs from near my home about 7 miles to campus. I get a nice view, I get to stay almost entirely off the main road for safety, and I get to bike to work.

There are one or two places along the way where I have to cross a side street, or switch sides of the road, on my way to work. And the most complex of these is the traffic circle at the intersection of Route 2 and Route 3, on Memorial Drive by the BU Bridge: 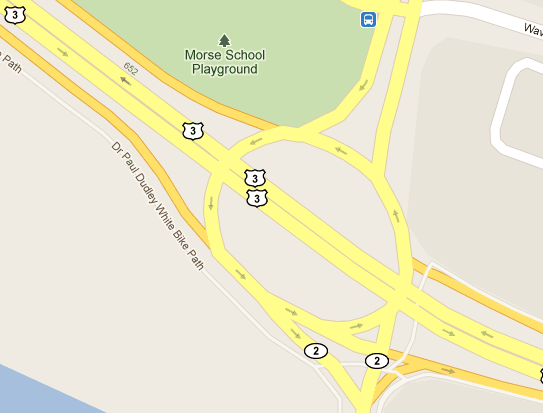 When I bike back home in the afternoon, I have to get from one side of the road to the other. Because there aren’t any good crosswalks, the safest way for me to do this is by going into the traffic circle and switch sides basically like so: 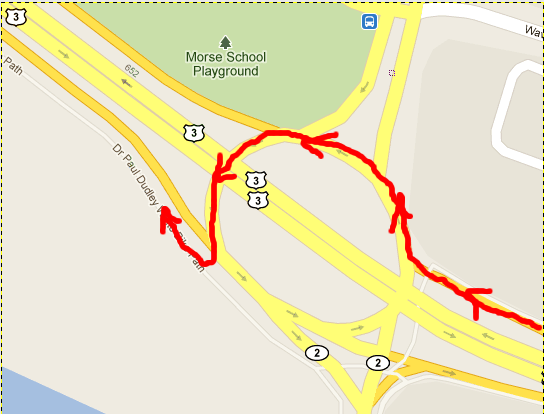 Usually, I’m biking home in the sweet spot of post-rush hour and pre-sunset, so the traffic is light and so is the sky.

Such was the case this past Tuesday evening. I left work around 7 PM and began biking home, staying safely on the off-road bike path until I began to approach the circle. About a hundred feet before the circle, I entered the road via a ramp, and, staying to the right side of the road near the curb, I traveled down the road something like this: 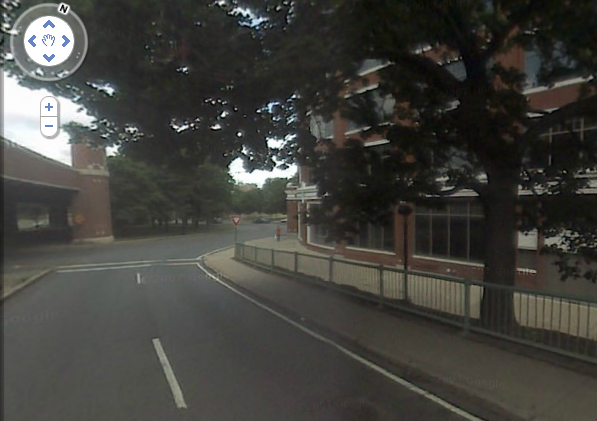 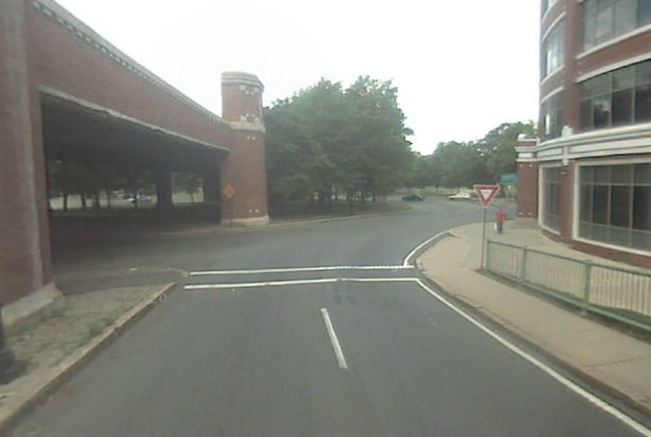 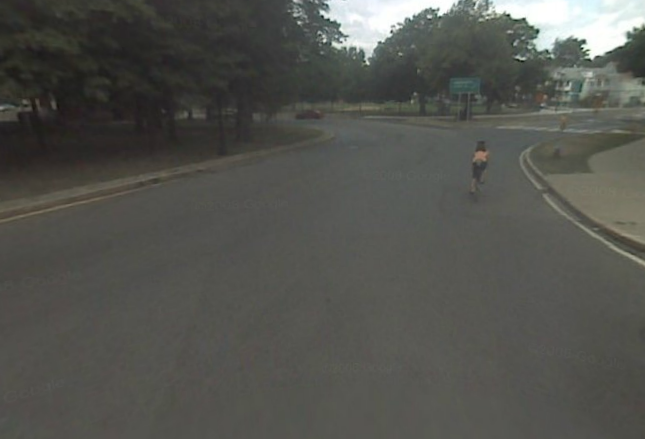 (as you can see, there is a biker on this route right now – Google Street View is eerie like that) 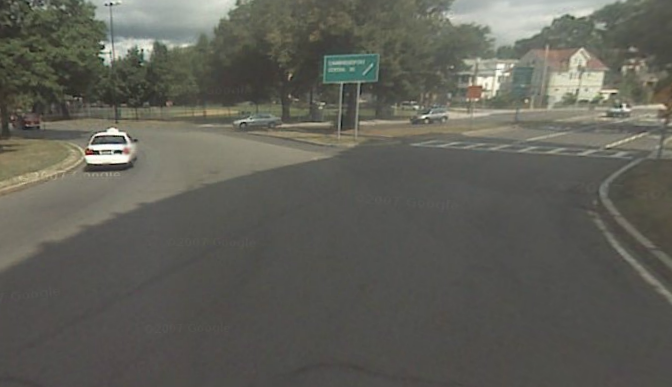 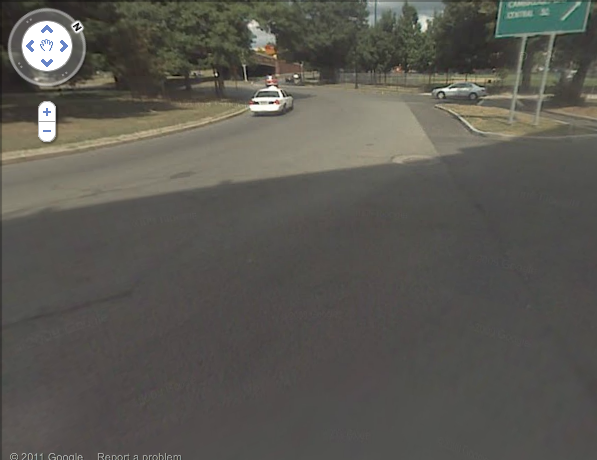 And then, out of nowhere, 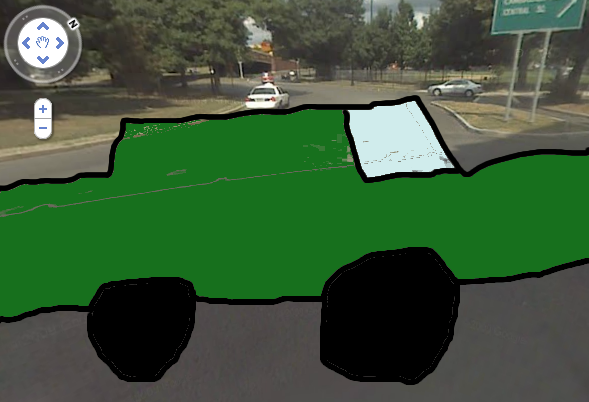 I don’t know where the car came from. From his angle, I think the guy must have been coming from 90 degrees to my left, from over the BU Bridge. All I know is I was biking, and I was halfway across this first road on my right, when all of a sudden a big green sedan is cutting right in front of me, and I’m going to hit it. 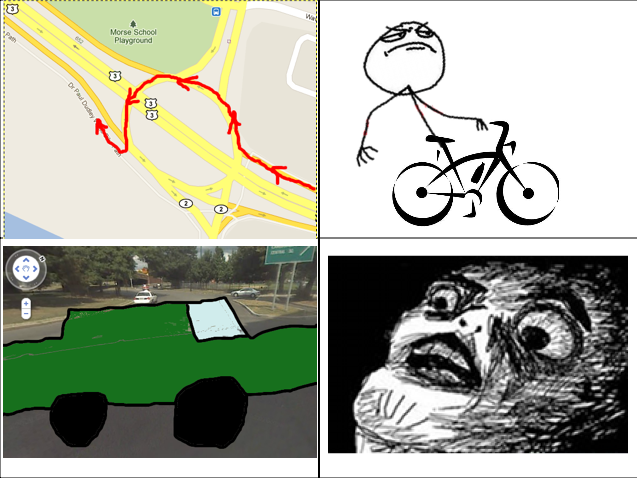 I tried to brake, but at 20 MPH even the best brakes can’t stop you when the thing you’re trying to hit is only a foot in front of you. So as the car kept driving – moving from my left to my right at an angle – my front wheel, along with the rest of me, smashed directly into the passenger side at about a 45 degree angle. 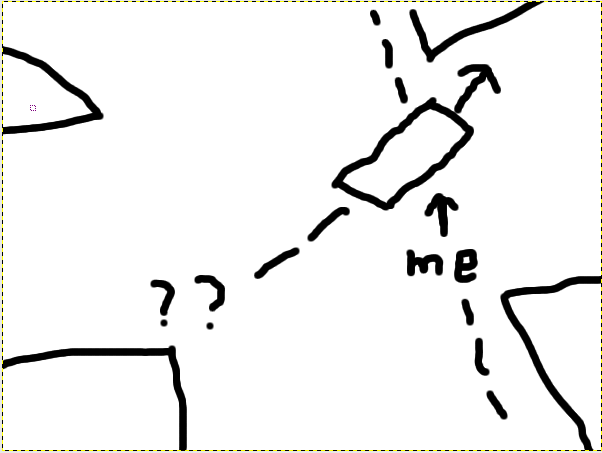 The car kept driving and I, rapidly decelerating and twisting to the right from the force of the impact, began to tumble off my bike into the road.

Sometimes people who undergo some form of trauma will talk about everything slowing down and going in to “bullet time.” It’s a real thing. I’ve done it before, once, when I was 11, and I was playing air hockey with my little brother, and he hit the puck such that lifted off the table and flew directly at my face, and I watched it lift, watched it wobble gentle in the air, counted each rotation as it spun, watched for a good five minutes until it struck my forehead directly between the eyes and then dropped back to the table as everything sped back up again.

Ironically, I didn’t go into full bullet time during this unquestionably more dangerous experience. I remember hitting the car, I remember falling to the right, and I recall thinking, very clearly and in a complete sentence, “dammit, this is a terrible way to die.”

My bike continues to fall to the right, and the rear is lifting up, because remember, I’m undergoing fairly rapid deceleration. So as I fell, I jumped, pushing off the pedals, and vaulted my handlebars. I hit the ground on my toes, then my knees, then planted my left arm and instinctively went into a tuck-roll over my right shoulder and flipped back onto my feet.

Somehow, there was no traffic coming. My bike was on its side in the road. I grabbed it and threw it into the grassy median and jumped onto it myself. I then thought three things in very rapid succession.

The first thing I thought was this: holy crap, I’m alive, and I’m ok

The second thing I thought was: how the hell am I alive and ok

The third thing I thought was something like this:

Well, the car was cutting from my left to my right and, because of the bend in the road, I hit it at about a 45 degree angle. 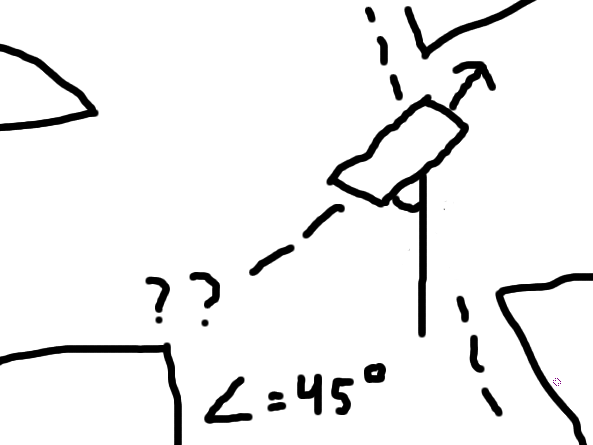 If a ~200 pound man, traveling at ~20 mph, strikes a moving motor vehicle at a 45 degree relative to the forward motion of that vehicle, at what rate do his X and Y velocities reduce as a result of the impact, and how much skin will be left on his knees at the end?

I remember standing there on the side of the road, before the car which hit me had even come to a stop, and thinking: if the car had come at me directly from the front, the back, or the side, I’d be dead. Only because of the direction in which it was moving, and the fact that I struck it at an angle, by which I rapidly decelerated as my momentum bled into the forward movement of the car before falling, was my crash not more serious.

This is what happens when you work at MIT. I suffered a near-death experience and the first thought to cross my mind after confirming my continuing existence on the earthly plane was how my accident could be modeled as a physics problem.

About thirty feet away the car stopped. After a good five seconds of looking in the rear view mirror – presumably deciding whether I looked like a guy who might sue him – a middle-aged man exited the car and yelled over to me.

Me: …well, I guess you turned, and I kept going.

(Now see, this was a very effective thing for him to say. Because in my state of shock, it placed a seed of doubt in my mind that I had caused the accident. “Oh”, I thought. “I didn’t signal. Man, what a mistake by me. Why didn’t I signal?”

Of course, as I later realized, I didn’t signal because…I was staying in the traffic circle, and you only signal when you exit a traffic circle. He was exiting. And he didn’t signal. Trust me, my face was a foot from his blinker.)

Me: well, you know, things happen.

Man: Sorry dude. Do you need anything?

Me: …just keep an eye out for cyclists.

He then sort of weirdly clutched his chest at me while scrunching up his face like he’d been kicked in the back of the knee. I think he was trying to communicate empathy to me but it just looked like he was suffering gastrointestinal distress. Then he got back in his car and drove away.

It was right about that time I realized two things:

My housemate Becky picked me up and drove me back home. The next day I went in to MIT Medical and got checked up / xrayed – all fine except for some bad bruises and scrapes. My bike wasn’t quite so lucky, but Wheelworks is giving it TLC and I should know this weekend whether I need a new one.

That said, I’m incredibly fortunate to have escaped with nothing but, at worst, a broken bike and a few bloodied knees with which to gross Erin out. 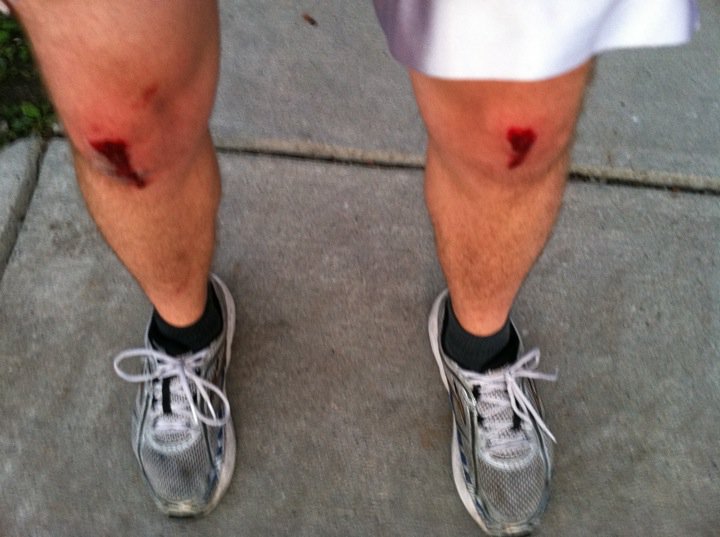 So that’s my story. Once I get my bike fixed I’m going to start biking to work again, though I will be avoiding the traffic circle and probably dressing up in strobing orangle jumpsuit like a circus tent at a rave.

Here are my lessons to you:

2) Always bike as if every motorist is trying to hit you. Most aren’t. But some are such bad drivers they might as well be.

3) In the words of Walter Lewin: “physics works! I’m telling you!”