Happy Labor Day Weekend y’all! I’m up north in my ancestral woods of New Hampshire this weekend, but I wanted to take this brief moment of consciousness between an otherwise unbroken day of naps to share with you something truly serendipitous.

Back in July, when I created the 2010 Blogger Application, I included as one of the optional essays the following prompt:

You awake one morning to find the zombie apocalypse hath begun. You are in your house, the car is at the shop, and you don’t have any firearms. What next?

Prefrosh applicant Emad Taliep ’14 used this prompt to share with us his great humor, vigilante vision, and sick drumming talent, as I excerpted on the entry announcing new bloggers:

The smell of decomposing flesh abounded. The nation was cast in eternal darkness, allowing the dead to rise. The shrewd cretins had shut down roadways and laid waste to supermarkets. The end seemed nigh. And the gigantic flamethrower I ordered was stuck in Beijing.

“I’ve gotta beat them somehow,” I said, in an impromptu dramatic monologue. “Wait…beat! That’s it!”

I called my friend David – a man so metal, he frequently drew suspicion from airport security – and told him to bring his guitar. My plan? To defeat the zombies with a logic bomb.

We’d play death metal loud enough to wake the dead, yet heavy enough to cripple the living. I took a gamble by thinking death metal could be so intense, it could actually be lethal. But, in paranormal situations, risk-taking is essential.

David plugged in his axe, amp, and mic, cranking up every dial. I put on my headphones, ready to unleash percussive chaos. As the zombies approached, David and I chugged out a window-shattering riff of sonorous death with a pounding rhythm. Our righteous metal threw the zombies into existential limbo, with the conflicting commands to die and reawaken putting their lives in flux.

“Finish them!” I screamed.

David growled into the microphone, rending the skies with his resonant voice. The Gods of Metal replied by raining down utter carnage. Lightning bolts fiercely incinerated the undead oppressors, leaving naught but scorch marks where they once stood.

So why am I bringing this back up?

Because my youngest brother – who just yesterday began as a freshman in video game design at neighboring Northeastern University – just sent me this Kotaku article:

The wait to use your Rock Band or Guitar Hero drums against the undead is almost over. Here at Penny Arcade Expo, Vancouver-based developer Andrew Laing is debuting Drumskulls. It’s like drumming, but it’s also like saving the world.

Clearly, this means that either:

a) Emad can tell the future
b) Vancouver-based developer Andrew Laing can tell the future
c) The idea of using death metal drums to destroy the undead is so strongly swimming in the zeitgeist that it would crystallize separately across continents at almost exactly the same time.

I fear a) because I write his paycheck; I fear b) because who is this mystery man from the North; I fear and love c), because that is the kind of world I want to live in with its terrible beauty and associations.

On that note, two last observations for the weekend:

1) Benefits of living in Boston – moving Eric (that’s the brother) in this past weekend, and my family stops by Qdoba right by his dorm (a poor shadow of Anna’s of course), and who should be signing stuff outside but Tara and Alcide from True Blood! 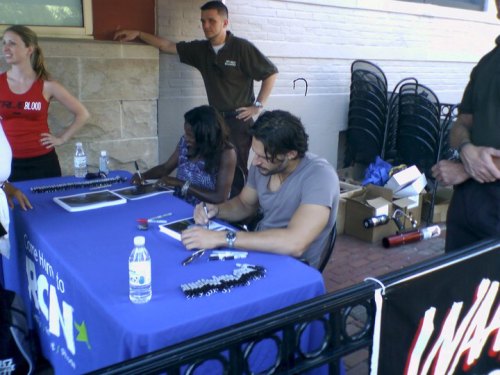 I waited in line for maybe 30 minutes to get personalized autographs for my girlfriend, who loves the show (as do I) for it’s trashy, bloody, epically shameful nature. I endured crazy bald ladies screaming “I drink human blood!!” for this because I am that caring. She doesn’t know yet, but that’s ok – she somehow spilled like a gallon of water on her iPod, Blackberry, and laptop yesterday, so she’s Internetless and will be until after I give them to her. Hooray for expensive accidents moving her outside the stream of time!

2) Saw Machete on Friday night at midnight during The Tepid Thunderstorm Known As Hurricane Earl. Without question the high point of my life, and probably for all of human existence for that matter.