I’m taking 21W.744, The Art of Comic Book Writing, taught by Marjorie Liu. Note that it says comic book writing, meaning that we are writing the descriptions that will then be given to an illustrator. Then this illustrator will take our script and transform it into the comics you know and love.

This is an especially challenging task because comics live in the in-between of novels and movies. Novels allow for endless words — descriptions and dialogue that can enhance our understanding of the world and the situation. Movies are moving pictures, giving us motion and timespan and an easy to follow path.

Comic books, though, are static images that rely more on its pictures to tell story rather than its dialogue.

For our first assignment of the class, we were challenged to write a script for a three-paged comic about anything we would like. We actually didn’t have to illustrate it, but I thought it would be a neat challenge to illustrate it and see the difference between writing and drawing. Here is that script in it’s picture form and script form. 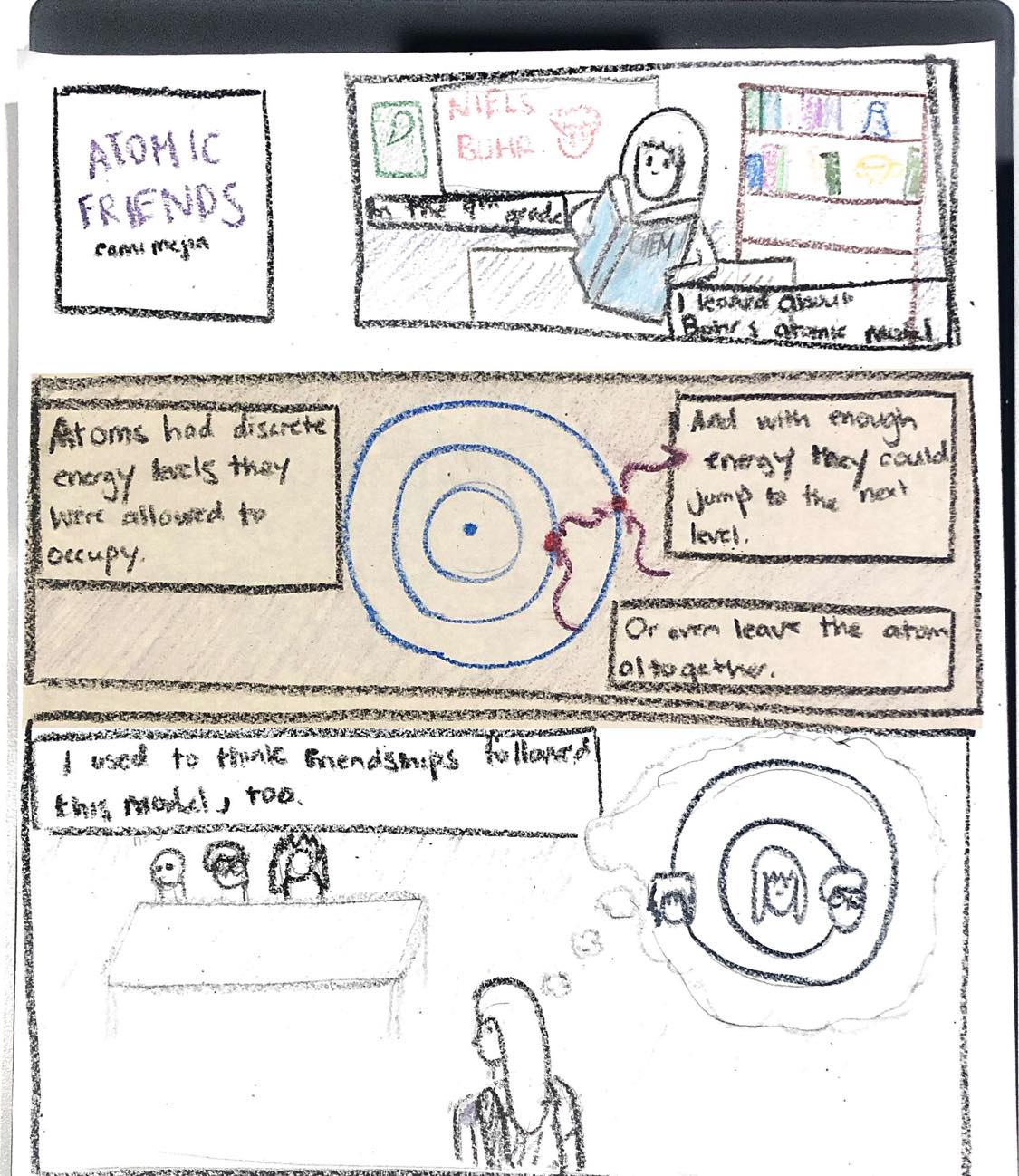 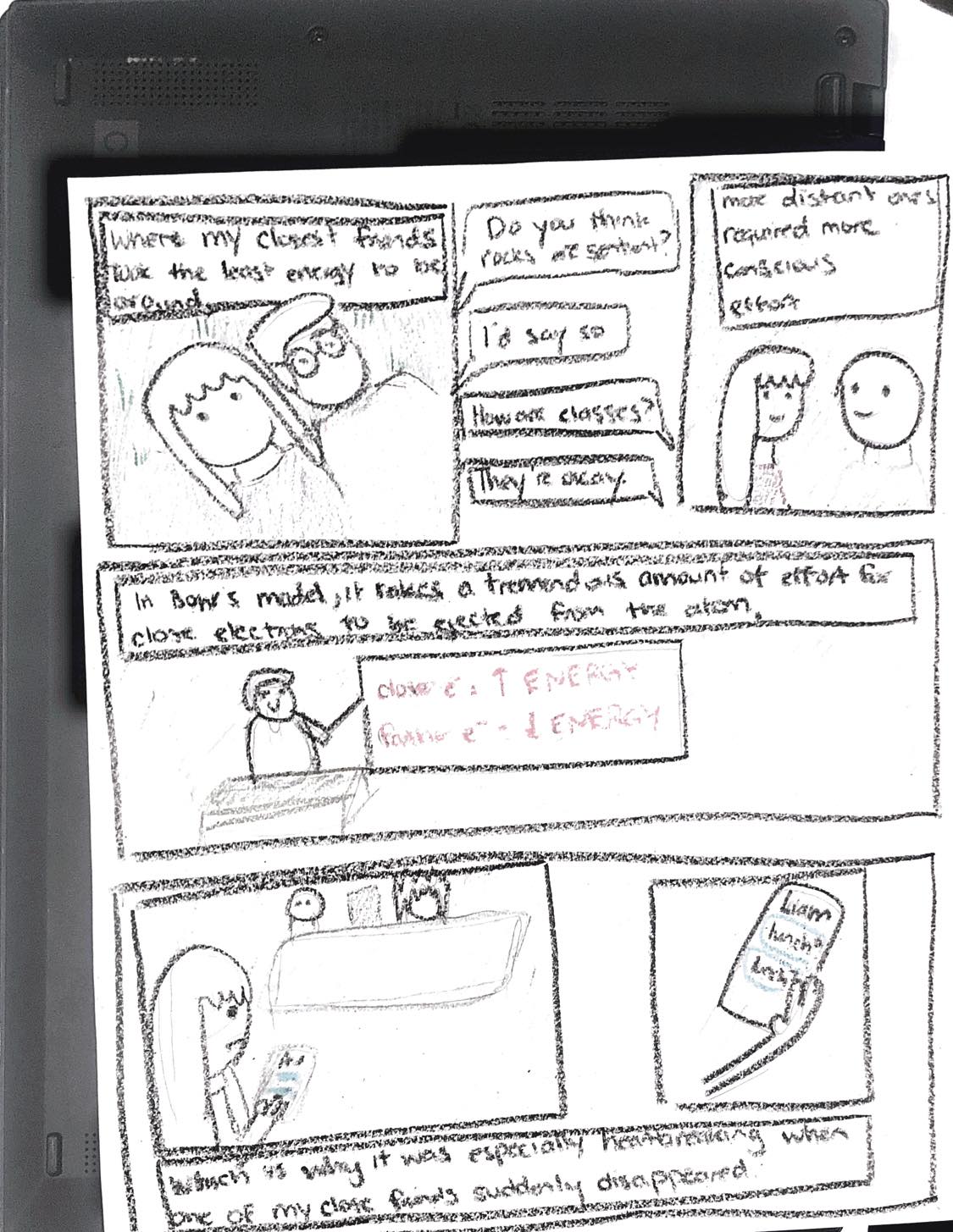 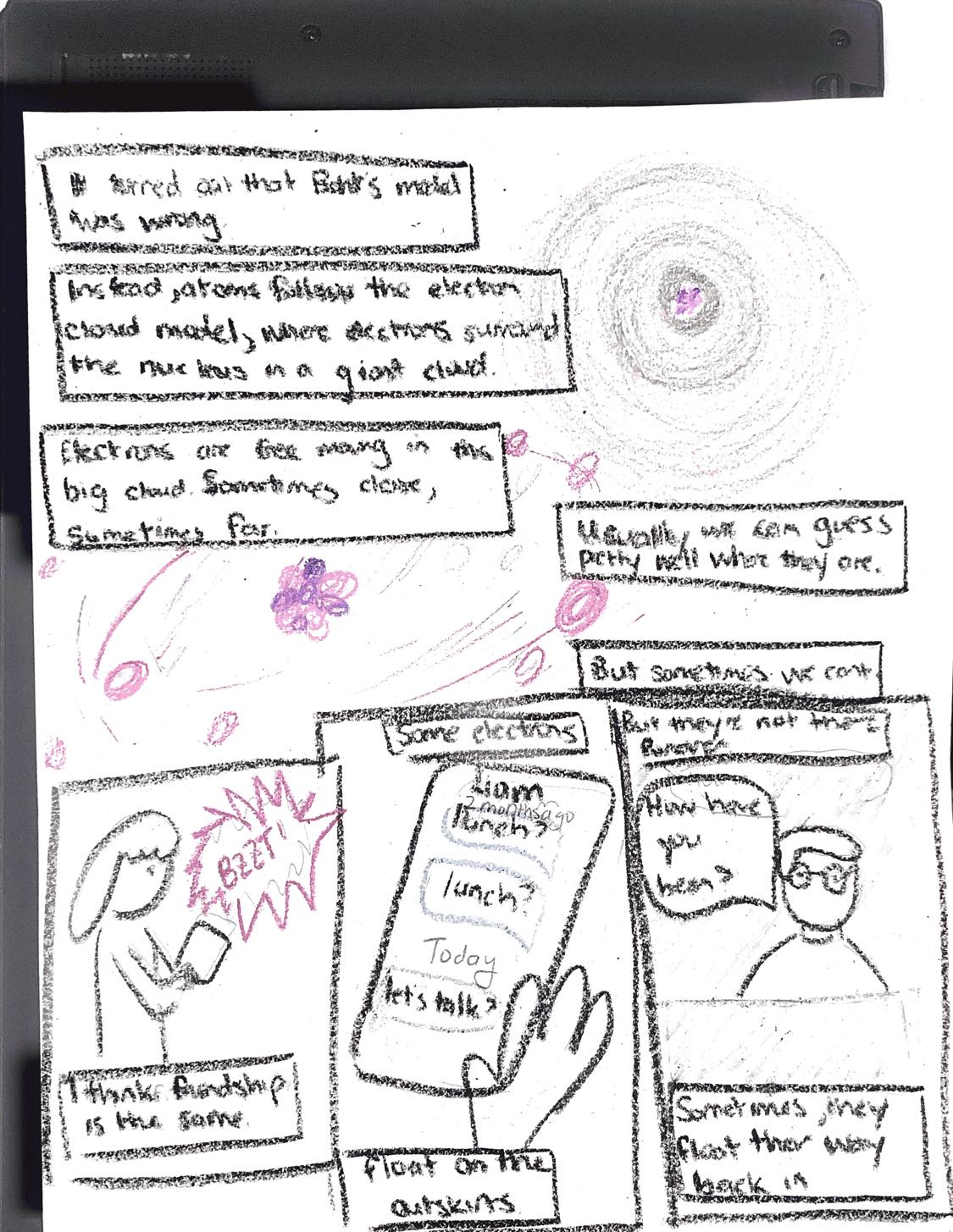 Text should be in all caps and in handwritten script to make the comic feel more journaled/blog-like.

A young 14 year old girl, Cami, with her hair tightly pulled back sits in a high school chemistry classroom reading a thick hardcover textbook titled ‘HONORS CHEMISTRY’. The cover of the textbook has some vague chemistry-like things on it like atoms and Erlenmeyer flasks and beakers filled with nondescript liquids. An Expo marker drawing of Niels Bohr is drawn onto a whiteboard in the background, with his name next to the sketch. Cami sits at the desk reading the textbook expressionless.

CAPTION: In the 9th grade…

A simple scientific drawing of the Bohr atomic model sits in the middle of the panel. The background can be black or can be some purple-bluey space color, whichever fits best. There should be at least one electron in one of the orbits, with a squiggly line going into the electron to depict energy going in and another squiggly line coming out of the electron pointing to the next       orbit.

CAPTION: According to Bohr, atoms have discrete energy levels they can occupy.

CAPTION: And with enough energy, they could jump to the next level or leave the atom altogether.

Current-day Cami is closer to the frame, smiling and staring off at her friends sitting at a lunch table in the distance. The surrounding is the New Vassar cafeteria. Around the lunch table are 4 friends, with each friend having a corresponding atomic orbital above their head, n=1, n=2, n=3, n=4. The friends are generic and nondistinctive, except for the one with n=1. n=1 is Liam, who wears glasses and has soft brown hair that swoops to the side. He wears a plaid button up and has an awkward, but kind look to him. To Cami’s right, depicted in her thought bubble, is the Bohr model, but instead of electrons, it’s her friends’ faces and her as the nucleus.

CAPTION: I used to think friendships followed this model, too.

Cami and Liam are laying in a bed of grass at night, staring into nothingness. They look contemplative and content.

The same scene as before but Cami has her mouth open, speaking, her eyebrows furrowed a bit.

CAMI: Do you think rocks are sentient?
LIAM: Yeah, I’d say so.

CAPTION (PANEL 1): Where my closest friends took the least energy to be around,

Cami talks with one of her friends, once again a generic face without much detail. Above their head hangs an atomic label, n=4. Cami is smiling at her friend. The smile is warm, but maybe a little strained. The friend’s face is also this blank smile, like a default reaction. Pleasantries.

CAMI: So how are classes?

A fourteen year old Cami sits in her high school chemistry classroom, watching her teacher at the front of the room draw on the whiteboard. Her back is to the panel and we can see an angled side portrait of her face where she is studious and attentive. The main focus is on her teacher, who is pointing at a diagram drawn on the whiteboard and explaining how more energy is required to eject electrons that are closer to the nucleus, and farther away electrons require less energy. The squiggles from before can be used to depict this. Her professor is a heavy-set, pear-shaped man with large eyebags underneath beady black eyes. His hair, a small tuft of black combed over to one side, is thinning. He looks determined as he explains this concept. Note that though the teacher looks strict, he is also kind deep at heart, like somewhat of a grumpy teddy bear.

CAPTION: In Bohr’s model, it takes a tremendous amount of energy for closer electrons to be ejected from the atom.

Current Cami looks again at the lunch table but this time a chair is empty. We see friends n=2, n=3, and n=4 but decidedly n=2 is missing. Cami is frowning and confused in his absence, with her phone just barely in frame.

A zoom in shot on Cami frowning down at her phone, with her phone completely in view. The phone shows a text conversation between her and Liam. It’s all messages from Cami:

CAPTION (PANEL 4): Which is why it was especially confusing when one of my close friends suddenly disappeared.

This splash should take up about half the page. It’s a close up of the electron cloud model of the atom, a nucleus at the center with an outwards radial gradient meant to represent electrons. Drawn on top of this depiction is the prototypical atom model, with ellipses drawn as light streaks to depict electron movement.

CAPTION: It turned out Bohr’s model was wrong.

CAPTION: Instead, atoms follow the electron cloud model, where electrons surround the nucleus in a giant cloud.

The next major image should be a super close up of the atomic model, zoomed in on the nucleus and its first orbit. We see the nucleus in view and we only see part of the orbit, with an electron zooming around the nucleus. The electron can be slightly blurred and with speed lines. The electron appears further along the orbit, solid now, showing it’s moving along the arc.

CAPTION: Electrons are free moving in this big cloud.

CAPTION: Usually we can guess where they are pretty well.

CAPTION: But sometimes we can’t.

Cami stands in the hallway. The posters on the wall behind her all indicate winter events, like ice skating, hot cocoa, upcoming Christmas break. She’s dressed in a thick snow jacket with boots and a scarf, her cheeks slightly tinged with pink from the cold. She looks down at her phone, looking slightly perplexed. She’s chewing on her bottom lip and her eyebrows are furrowed in concern.

CAPTION: I think friendship is the same.

A zoom in on Cami’s phone. It is once again a conversation with Liam. We still see her past messages at the top, the three “Lunch?”es. The last “Lunch?” was sent Sep 8. The new message comes from Liam, seen at the bottom of the phone. It reads:

Hey! I’m sorry I’ve been MIA. Lunch to catch up?

Her thumb hovers over the send button. Typed into the message field is a simple “sure !!”

Cami and Liam sit at a small lunch table. We see just the back of Cami’s head and the shot is more focused on Liam, still wearing the same glasses but his face is a bit more angular and chiseled, with maybe some slight scruff. It’s as if he’s gone through something, matured a bit. He looks relaxed as he talks to Cami, softness in his eyes, a slight smile as he talks.

LIAM: How’ve you been?

CAPTION: But they’re not out there forever. Sometimes, they find their way back in.