The problem with me.

This post is about the classes I’m taking – and is a case in xkcd‘s point. Without further ado, allow me to introduce you to…

Professor van Oudennarden (pronounced “ow*-duh-nar-done”) kicked off our first lecture with a demonstration. He placed a glass next to some speakers, and turned up the volume (I covered my ears) until it shattered with a bang.

*In contrast to “ood”, an alien species from Doctor Who characterized by baldness and tentacles sprouting from the face. Contrast: 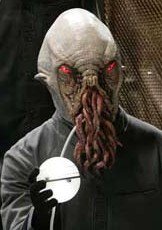 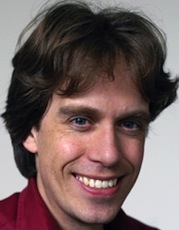 The pre-8.03 reaction: my level of awe and wonder is inversely proportional to how much my ears hurt. Also, because I didn’t expect the glass to break, the BANG almost gave me a heart attack.

The post-8.03 reaction: if we struck the glass, it would ring with a frequency identical to that produced within the speakers. The speakers produced this frequency with two magnets, whose alternating polarities drove a coil, which pulled a membrane back and forth, which in turn pushed air out in the form of sound waves. These sound waves travelled to the glass and caused the molecules to vibrate. As we turned up the volume, the molecules in the glass vibrated more and more violently, until they finally broke free from their crystal structure. Awe and wonder: the vibrations that caused the molecules in the glass to fall apart from each other are the same vibrations of a fluttering diaphragm in the heart of a speaker.

Our first unit is on “amines”, a class of organic compounds that contain nitrogen.

The pre-5.13 reaction: who cares? How do you even pronounce “amines”, anyway?”

The post-5.13 reaction: you pronounce ‘amines’ uh-means, and they have exciting properties that your human existence depends on. Do you recognize this guy? 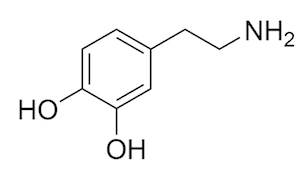 Dopamine is a neurotransmitter, which means that it helps the cells in your brain talk to each other. In other words: it allows you to function. Have you heard of Parkinson’s Disease? The condition is associated with particularly low levels of dopamine in the brain.

Neuroscience nerd that I am, I freaked out and ran upstairs when I saw this in the textbook. Daniel L. ‘12 was the first poor soul I encountered.

Me: DANIEL
Daniel: Yes?
Me: DOPAMINE.
Daniel: …What about it?
Me: Dopamine. Dope. Amine. DOPE AMINE! DOPAMINE IS AN AMINE!!!!!!
Daniel: Yes!

The post-9.01 reaction: Woah. That’s extraordinary. You’re a blob of cells, and not only are you reading and understanding this, but you are thinking about the fact that you are reading and understanding this. Yay brains! Yay neurons! You have them to thank for all those things you take for granted – consciousness, your ability to store memories of the past while imagining the future. 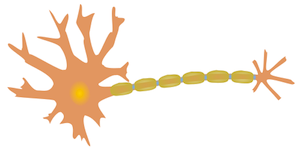 A neuron! Isn’t it cute?

You have about 100 billion neurons, busy sending electrical signals and converting the signals they receive into chemicals. I would like to thank my neurons for permitting me to learn about…

The pre-8.286 reaction: I wonder what the carpet smells like.

This is more related than you would think to…

This is a seminar-style course on ethics in literature. It’s co-taught by my literature professor from last semester (Ruth Perry – she’s wonderful) and the head of the philosophy department. We haven’t had our first class yet, so I don’t have much to say about it, but expect to hear plenty more as the semester progresses. What I CAN say is that every particle in every printed letter of each book we’re going to read is descended from the same patch of repulsive material as the particles in my fingertips. And that I can attribute my enjoyment of the text to the dopamine in my brain, and the neurons that contain it. And that this act of saying and your act of hearing rely on vibrations in vocal cords and air and eardrums.

Doesn’t that make you happy?

8 responses to “Beauty, xkcd, and my classes”