The kids I volunteer with are magical.

I was five years old the first time someone accused me of witchcraft.

I was taking a bath (not really sure why this detail sticks in mind) and it was close to Halloween: my birthday. My little sister poked her head in.

Lisa: Anna, does being born on Halloween mean that you’re a witch?
Me [exhibiting how to irresponsibly wield one’s older sibling powers]: Yes.
Lisa: REALLY?
Me: Yes.
Lisa: Woah!
The second time someone accused me of witchcraft, I was a sophomore in High School, tutoring a seven-year-old a short bus ride away. One day, while I was explaining how to add double-digit numbers, she interrupted to ask whether I was Hermione Granger, from Harry Potter. Flattered, I tried to imagine that it was because of my towering intellect and spirit, and not the combination of bushy brown hair and big front teeth.
The third time was a little more peculiar. I was getting a tuberculosis skin test, which I needed in order to start volunteering at a local hospital.
Nurse: Birth date?
Me: 31 October, 1992.
Nurse: WOAH! You’re a HALLOWEEN BABY!
Me: …yep.
Nurse: I KNEW you looked like a witch!
Me: …..
The fourth time was a couple of weeks ago, at the elementary school where I volunteer on Tuesday afternoons. My partner and I were supposed to teach a group of kids (ages 6-8ish) about gases and liquids, using Alka Seltzer. I was disappointed by the first step in the lesson plan – it said to drop the tablets in the water, and watch them fizz, which I thought would go down in history as The Most Boring Demonstration Ever. Fire is cool. Rockets are cool. Kids don’t want to see fizzing water. They can drink soda for that. Feeling a little guilty for bringing such a lame demonstration, I filled up a film canister at the sink, and carried it over to the table. Silence fell as the tablet plopped into the water.
The fizzing began, and so did the chaos. I thought someone had broken a leg, because the kids started screaming. They grabbed my arms, and screamed. They leaned into my ears, and screamed. They jumped up and down and grabbed each other and tried to climb on the table. They hollared and howled and flapped their arms, screaming: “IT’S EXPLODING!!!!!!!!!!!!!”
I glanced down. Foam bubbled feebly over the sides of the canister and formed a little puddle on the table. The kids continued to celebrate as though a rocket had been launched. “IT’S EXPLODING!!!!!” I was stunned. One kid sidled up next to me, and gazed up in awe through big round glasses. “Are you…” he began. “Are you…are you a wizard?”
–
Have you ever had a conversation with a child? If you haven’t, go find one. He or she will remind you how exciting the world can be, when you’re curious about everything and can see the magic in fizzing Alka Seltzer.
In High School, I tutored and babysat a second grader who told me that he was going to become king of the planet, so that he could force everyone to recycle. To encourage him do his math homework, we pretended that his pencil was a rocket and the pencil sharpener a refuelling station: when he did enough problems to run out of lead, he could navigate the pencil over to the sharpener, which I held high up in orbit. This kid also drew detailed diagrams of helicopters and told me that he was going to build robots “a thousand kilometers wide.” He had a beautiful imagination.
On Sundays, I volunteer on a pediatrics floor for infants and toddlers (what I needed that TB skin test for.) I disinfect toys and deliver movies and games to rooms, but more than anything I love playing with the kids.
These kids are not extraordinary. What’s extraordinary is that they manage to remain so ordinary. I’ve seen a baby giggling and babbling (as babies do) with my pinky in a vice grip – while being fed through a tube up her nose. I’ve seen a girl toddle into the playroom, and sit down at the table to paint some flowers – while connected to an enormous trolley of tubes and bags of liquid, which she wheeled in and parked next to her seat. One little boy cooked me an eight-course meal at the plastic stove; when I asked for dessert, he handed me a toy shark, and explained that the shark ate some Reese’s pieces, which were now in its stomach: by eating the shark I could eat the Reese’s too. Another boy grabbed my ID badge, and held it up to his ear, looking very serious. “Hello?” he said, into the ID badge. “Hello? Yes. Yes, thank you. Thank you. Good bye.” He hung up, and the ID-badge-phone flopped back against my chest. I had a fight with another kid over which of us was actually Iron Man. He won.
These kids at the hospital manage to remain as sparkly and creative as those at the elementary school, and the little boy I used to tutor. They remain children: they still see the world as a place where Iron Man exists and Alka Seltzer is magic and ID badges are phones and pencils are rocket ships. They’re sick and exhausted but they still want to get up and run around and play pretend and have adventures. I find that inspiring.
Has a child ever asked you a question? If not, maybe you’re unfamiliar with the fact that little kids ask wonderful questions – that they, in Neil deGrasse Tyson’s words (quoted recently by Emad), “are born scientists”. The Cambridge Science Festival runs an annual “Curiosity Challenge“, which accepts submissions from children who have some questions about how the world works. A woman who helps organize the festival (an MIT alum!) showed me the results while I chatted with her about volunteering opportunities, and I knew from Page 1 that I had to have that book. She let me keep it. Pictures of some (of the many!) submissions are below – I would post all of them, but I’m pretty sure that would break the Internet. 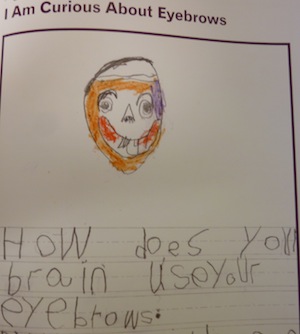 How does your brain use your eyebrows? 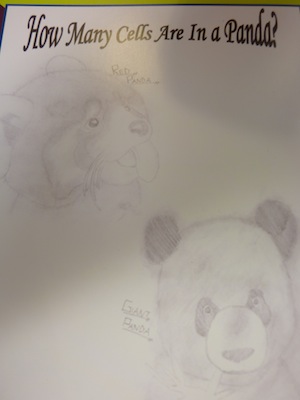 How many cells are in a panda? 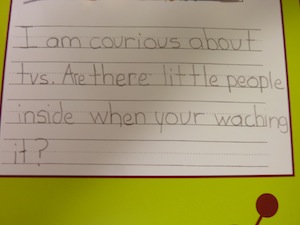 I am curious about TVs. Are there little people inside when you’re watching? 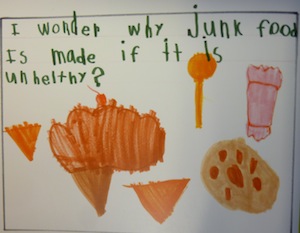 I wonder why junk food is made if it is unhealthy?