getting around different cities

I’ve been thinking about different modes of transport through cities. In the past three years, I’ve visited over 10 cities and lived in three. Each of those three have their own method of transport: Copenhagen bikes, Tucson drives, and Boston, among other things, rides the metro.

I grew up in a place where only driving made any sense. Now that I’ve been exposed to other ways of getting around, I’m thinking about what I want to look for in future cities I live in. 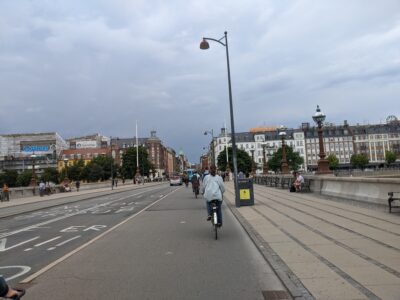 this is the bike lane! It is very wide.

In Copenhagen, Denmark, everybody bikes. A guide for a MISTI walking tour I went on explained that when cities were being re-built after WWII, they were designed with the new phenomenon of cars in mind. Copenhagen decided otherwise. Screw cars, they said. We’ll make this city as annoying for cars as possible. Instead we will ride bikes!

We do in fact ride bikes. I’ve heard from most people here that cars are made expensive via taxes, which can double the price of a car. I’m not sure how this translates to used cars — some are cheap enough that doubling the price wouldn’t make them inaccessible? All of the associated costs of having a car, such as maintenance, are also notably more expensive.

The bike infrastructure here is actually fantastic. The bike lanes are demarcated separately from roads and sidewalks, and are about 5 feet wide, so there’s space for two or even three bikes abreast. Most people bike single file, which allows faster cyclists to pass. Every major 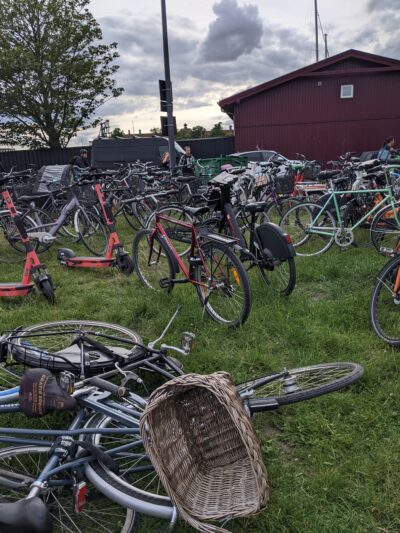 stoplight has a smaller set of lights for bikes. I’ve heard people who drive say that right turns are incredibly difficult, because you have to wait for a herd of bikes to fly past before you can even try; and then more bikes might come and cut you off.

Bikes are parked everywhere. People don’t lock them to objects here, they just lock the back tire to the frame. It’s a little riskier, because an opportunist bike thief could easily drive up in a big pick-up truck⁠01 not that such things seem to exist in Copenhagen and load bikes by the dozen into the back, then cart them off to a shop and break the locks at their leisure. However, this doesn’t seem to happen often, and the freedom of being able to leave your bike literally anywhere and trust that it’ll still be there when you return is so lovely.

The pros of biking:

All in all, I enjoy biking quite a lot! I wish more cities had good bike infrastructure, because I can’t imagine biking everywhere in Boston or Tucson. 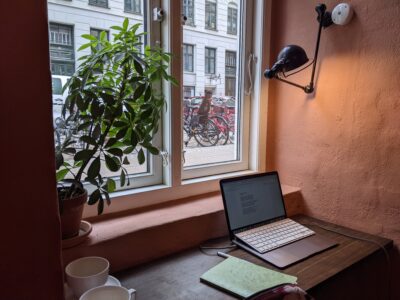 guess what is outside that window? Bikes 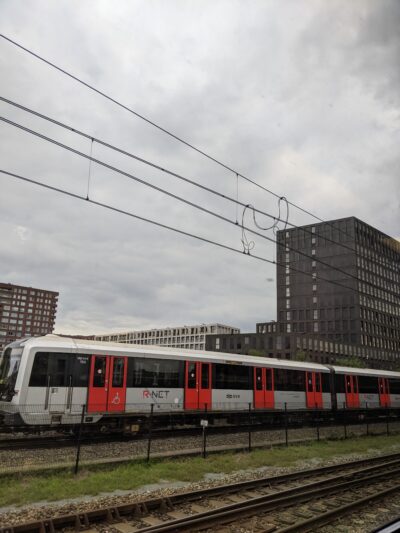 When I visited Tucson this winter, and spent two weeks getting everywhere by car, I felt the change. My body longed to move. I didn’t realize that walking to class would feel fundamentally different, but it did.

Subways similarly involve a lot of sitting. I don’t know how my body would react to using the subway long-term, as I’ve never lived in a city where subways are the main method of transport. I have, however, visited NYC, London, and Berlin, where the metro system works better than it does in Boston.

The metro: cheaper than a car, good for people-watching, and much cheaper than ubering home after a night out. I don’t love metro commutes, but I understand the environmental benefits of cities being connected by public transit. I can also see the draw of being able to chill out on the commute, rather than being alert and navigating traffic, as one would with a car or bike.

I was going to turn my notes for this section into actual prose, but I think the notes get my point across:

Car have space for cake for groceries for friends. In car can hear music go blast. Can sing. In car friend can read book while car go vroom down small winding highway.

Car have AC.⁠05 actually the AC in my car dies when it gets too hot. I always pause to appreciate the irony when it’s 105 F and the stream of cool air behind my steering wheel putters out Car have battery for charge phone. Car have trunk for store bodies. Also camping supplies.

Boston is a sweet in-between in terms of transportation. Many students cannot afford parking spots, let alone actual vehicles. But that’s okay, you don’t really need one — there’s a metro which only catches fire occasionally, and usually drops you within 20 minutes’ walking distance of wherever you want to go. You can also bike! The cars are vicious and speedy, however, and bike lanes generally don’t exist, so bike at your own risk. Also, half the year there’s ice.

Most of the interesting things that happen during college happen on campus, anyway. 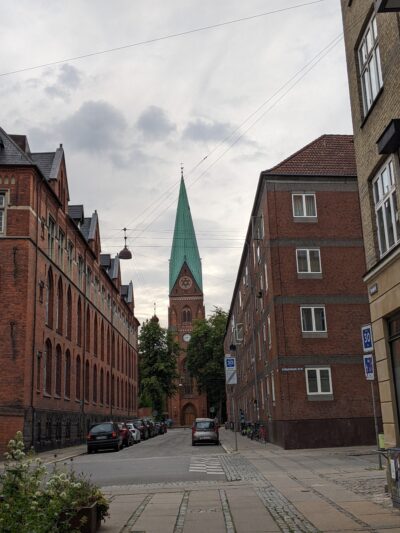 Ultimately I’m glad I was introduced to biking full-time to get around. I know that driving everywhere isn’t the most environmental option, and the costs of insurance and maintenance add up. In many cities, it seems that owning a car is more trouble than it’s worth. I still plan to own a car later in life, if doing so is practical, but for day-to-day commutes, I’m having a good time with bikes. I like that biking gives you a smaller version of the freedom cars afford you — and, hey, extra exercise!

Despite the above complaints about scary fast cars on Boston streets, I’m looking forward to biking around more when I get back to campus.