Calculus in Context by Veronica M. '22

Classes at MIT will have you looking at a subject from about three different angles, and my  Single Variable Calculus class is no exception. I think the true definition of drinking from a firehose is to be learning calculus and seventeenth century history in equal measure all in a span of a fifty-minute lecture. There’s nothing quite like it. I must admit that this class did not start out well for me as all I had from high school was basic knowledge on differentiation and integration. I did some self-studying before I got to school that probably cushioned me from the shock I’d have gotten if I had to learn about natural logs and Euler’s constant and all that scary mathematical jargon for the first time. The fact that I have always loved math is probably working in my favour as well!

During lectures, my professor brings up some interesting facts about the early development of calculus to emphasize that there were brilliant people who developed all that we learn today. This is eye-opening since I’ve never really thought before about how maths came into being. Turns out that calculus, which I least expected to have anything to do with the humanities in any sense, was actually partly developed by renowned philosophers. Leibniz, in particular, used mathematical concepts to reinforce his optimism that a supreme being chose the best possible conditions for the world to exist as we know it. 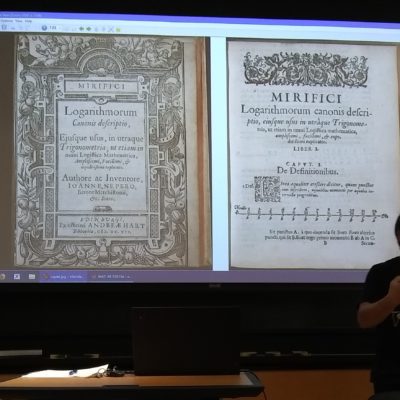 John Napier’s Mirifici Logarithmorum, where he devises the theory of logarithms

In a recent lecture, my professor presented translated manuscripts from the School of Kerala, which showed their work in calculus and their derivations of what we learn today as differentiation. This dates back to the early 1600s, way before Newton’s time. The birth of calculus in modern society, however, was in the mid-seventeenth century, thanks to scientists like Newton, Leibniz and Hooke who have come to be regarded as the greatest thinkers of our time.

The well-known dispute between Newton and Leibniz has come up in our lectures, as well as the claims that Barrow was the true inventor of Calculus, and that Newton and Leibniz were simply interpreters of the subject to an algebraic form. Newton wrote a book, Introductio ad Quadraturum Curvarum (Introduction to the Quadrature of Curves) where he introduces concepts like derivatives and tangencies. Leibniz had been working independently and developed much of calculus himself as well. Leibniz also made great strides in Optics, such as deriving laws for both reflection and refraction of light. Leibniz struggles to relate mechanical theories to religion, and comes to the conclusion that not only is the mechanical philosophy consistent with theology, but the mechanical philosophy demands that there is a God. As Garber writes in his book, The Mechanism of Religion: “We today are inclined to see science and religion at odds with one another. Nor was this an idea that was foreign to the seventeenth century. But for Leibniz, the two were intimately interwoven. For him, even the laws of motion and the path taken by a ray of light were testimony to the wisdom of the Author of nature.”

Leibniz was a philosopher, and was careful about finding good approach to talk about things. Newton had introduced derivatives in 1665, describing them as ‘fluxions’- Leibniz discussed most of the same concepts in his book but used terms like dy/dx. In his book, Nova Methodus pro Maximis et Minimis, he describes more philosophical methods of finding tangent lines, maxima and minima, and deriving the product and quotient rules. 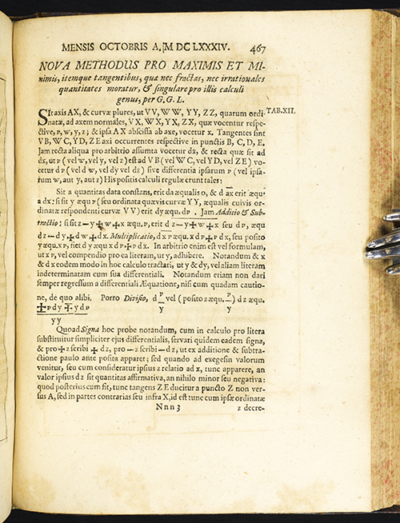 Calculus was not well received by everyone in society, and Newton had just as many critics as he did admirers. To show one such instance of this, my professor presented a piece published by William Blake in 1804. Blake was a somewhat eccentric poet, and an excerpt of his poem ‘Jerusalem’ focused on what was a stirring contemporary issue at the time: the worry about social disruption caused by the industrial revolution going on at the time (mechanical looms driven by water power had just made their debut). He also implies that the concepts introduced by Newton and the Enlightenment was causing chaos in society.

Excerpt from Jerusalem by William Blake

I turn my eyes to the Schools and Universities of Europe
And there behold the Loom of Locke, whose Woof rages dire,
Washed by the Water-wheels of Newton: black the cloth
In heavy wreathes folds over every Nation: cruel Works
Of many Wheels I view, wheel without wheel, with cogs tyrannic
Moving by compulsion each other, not as those in Eden, which,
Wheel within Wheel, in freedom revolve in harmony and peace. 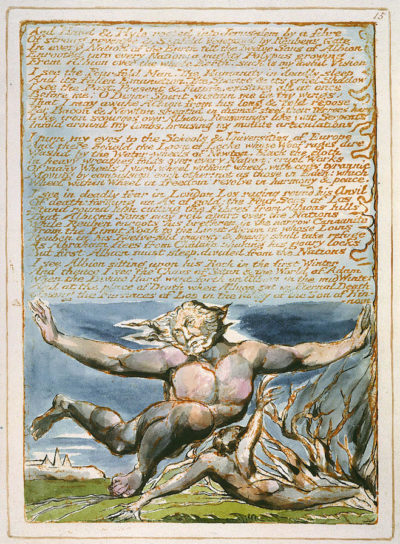 Science and religion have perennially been at odds with each other, and these new developments fanned those flames. The Newtonians had to bend their teachings to fit into the general idea of religion which was that of a universe ordered by a supreme being, and so they carefully manipulated their material to avoid controversy: as Samuel Clarke (an influential Newtonian) explained, “There is no such thing as what men commonly call the course of nature, or the power of nature. [It] is nothing else but the will of God producing certain effects in a continued, regular, constant, and uniform manner.”

In the seventeenth century, Science was considered to be in support of Christianity, so young Newtonians had their ideas endorsed and even rewarded by religious leaders. The Boyle lectures were held to discuss the collision of science with religion, and the possible integration of the two.

Newtonians tried to attach scientific discoveries to religion, to tie all phenomena they discovered to a supreme being in some way. Freethinkers did not believe in the presence of a superior being, so they accepted Newton’s mathematical discoveries but dismissed the theory of ‘natural philosophy’ which was the Newtonians’ way of tying their scientific beliefs to religion. In fact, they used Newton’s work as evidence that there was no superior being, but that nature acted on its own principles.

Yet another of Newton’s critics, Bishop Berkeley, wrote a book, ‘The Analyst’, which did not attempt to disprove calculus but argued that science did not stand up to rigorous scrutiny and could not substantially overpower religion.

The development of calculus also amplified the issue of the place of women in science. It was generally considered inappropriate for women to dabble in issues of science and mathematics. Most Science papers in the time of Newtonianism were written in Latin, and women were not taught Latin, so if they wanted to learn about scientific developments, they had to resort to popular science books, or private tuition if they were wealthy enough. Newtonianismo per le Dame (Newtonianism for the Ladies) was one such popular science book published by Francesco Algarotti as an easier alternative for the Newtonian theories for ladies.

One of the most important women in early Science was Emile du Chatelet. She translated Newton’s entire Principia Mathematica to French. She also wrote a book, Les Institutions de physique which she had to say she was writing for her son since that was acceptable; a mother teaching her son Physics was to be expected. What she could not do was take credit for her work, or say that she was making an independent contribution to Physics. She also had to state that her book had been reviewed by a male figure for people to consider her theories plausible. To further diminish her efforts, her tutor, Samuel Koenig took credit for the book, claiming that he had taught her the same concepts in their lessons. Emile turned to the Academy of Sciences for help, but they were unwilling to vouch for her integrity and she had to contend with this unjust shared credit. Emile was exceptionally ardent in her work, and she worked on her book on Newton’s theories through her pregnancy up to the time she had to deliver the baby. Unfortunately, she and her baby died soon after.

Then there was the poem by Lord Byron, Don Huan: Canto 1 written in 1818 where the poet writes of Don Huan’s mother, praising her intellect and mathematical skills, even describing her as a “walking calculation”:

His Mother was a learned Lady, famed

For every branch of Science known –

In every Christian language ever named,

With Virtues equalled by her wit alone,

She made the cleverest people quite ashamed,

And even the Good with inward Envy groan,

Finding themselves so very much exceeded

In their own way by all the things that She did.

Byron voices mainstream opinion; the popularity of Newtonianism in the 18th century had opened a window for women to get involved, but the following Romantic period was not as welcoming to the idea of women in science. Ironically, his daughter, Ada Lovelace, was the mother of computer programming, and one of the most brilliant mathematicians of the 19th century. 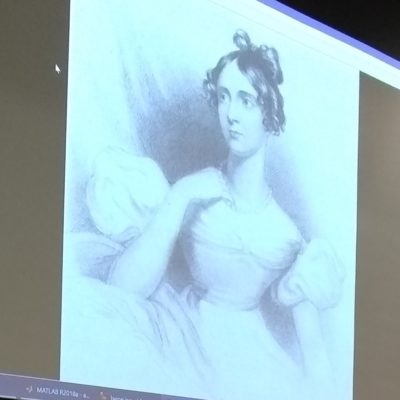 An artist’s impression of Ada Lovelace

At the end of our weekly problem sets (see below), my Professor attaches an excerpt from a random poem in The Robot Scientist’s Daughter, which is a collection poems written by Jeanine Hall all sharing a common title. We’ve all been wondering how this fits into the content of the class itself, and I personally admit to thinking it was part of some puzzle that would perhaps be set in the final, so it’s a relief to discover he just wanted to expose us to this amazing piece of poetry because of its relevance to us in the issues it addresses. In his words, “I thought it might resonate with some of you, because it balances a science-is-cool view, including pop culture references, a science-is-profoundly-scary-and-messes-with-my-body view, and plenty of issues with gender roles and stereotypes.” 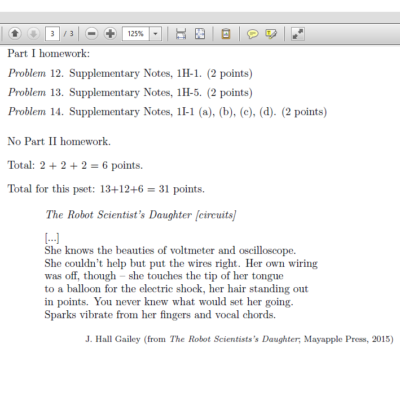 It’s an amazing way to learn math, and it gives a whole other perspective to what we do in class!

And here’s a twilight picture of the Great Dome. No camera can fully capture its magnificence, and I’ll probably never stop staring at it every time I cross Killian Court at night. 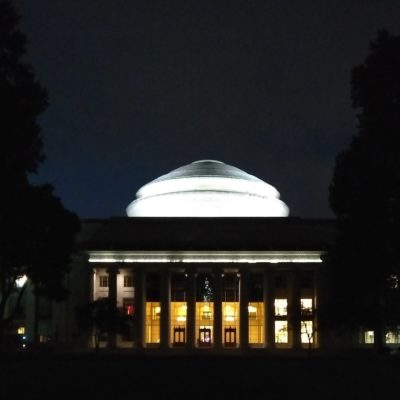