Getting some much-needed vitamin D on the other coast 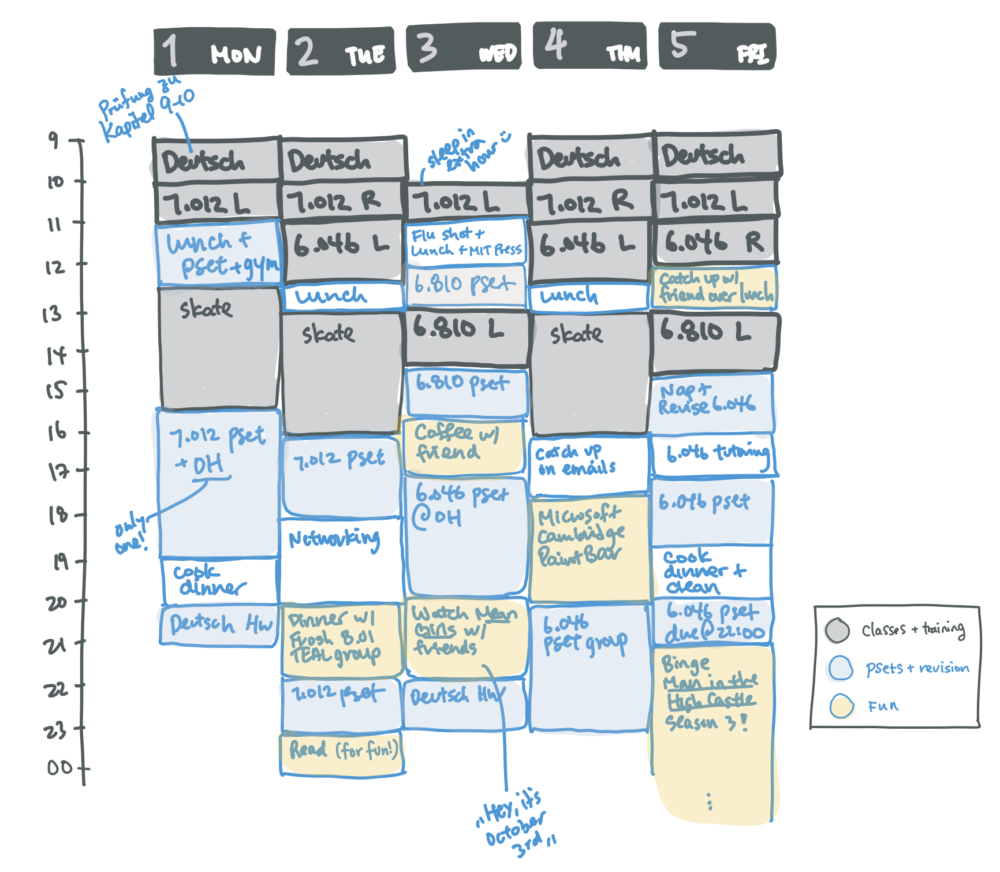 A peek into my week of October 1st to 5th, categorized by classes + training/practice (grey), psets + revision/studying (blue), and fun (yellow). 🗓

I ran into a friend who I hadn’t seen in over a year or two. We were in the same project group for DEECS, the former Course 6 FPOP. We caught up for a bit, reminisced about how quickly time has flown by, that we’re somehow seniors now. He’s working at a startup this semester, and we talked about the MEng. At one point, he mentioned how I seemed *changed*, calmer.

I guess going abroad changed me.

Later in the week, I ran into another friend who went abroad. We both had thought leaving MIT for a semester would make it harder for us to adjust back to the grind. But she’s felt it’s been quite the opposite — the stress and deadlines don’t phase her anymore. Maybe it’s because we’re seniors now.

And it’s already October. We’re a third of the way into the semester. Spooky how fast time is flying by. I’m at this point where I don’t want it to end so soon. Underclassmen me couldn’t wait to get to graduate. Some of my friends are also graduating a semester early. It’s one semester with them. Who knows where we’ll end up in the next few years.

This week has been long, but productive. I had an exam, 3 psets, and other miscellaneous assignments due. I put in solid training practices at the rink getting back in shape. I signed up for the NYU Intercollegiate Champs first week of November. 6 others on the MIT Figure Skating team are also going. Construction of the rink in Johnson Arena has been underway, too.

I also carved out time to have dinner with my 8.01 TEAL group in Central Square, read for the first time since the semester started, coffee and lunch with friends, watch Mean Girls on Wednesday, and paint a mural with PaintBar and other summer interns at Microsoft NERD. To top it off, the new season of the Man in the High Castle came out Friday, and I binged a few episodes into the wee hours of the night.

We had a 4-day weekend in mid-October. I originally had planned to go to Santa Monica for an on-site interview, but that was pushed to next week. Instead, I considered going to NYC, but I ended up staying in town and catching up on everything. I met up with Anelise N. ’19 to work on this blog at a cafe in Central Square, went to my first bar in Boston, and stayed up into the wee hours tinkering with React.js and making a new website.

Featuring pics along my daily commute throughout campus. The MIT.nano building is up and running, and yes it’s beautiful. 🚶‍♂️

I thought after that week I finally was on top of everything. I had planned to post this at the end of the first week of October, but didn’t get to it, so I’ll continue the story with the last three weeks as well. 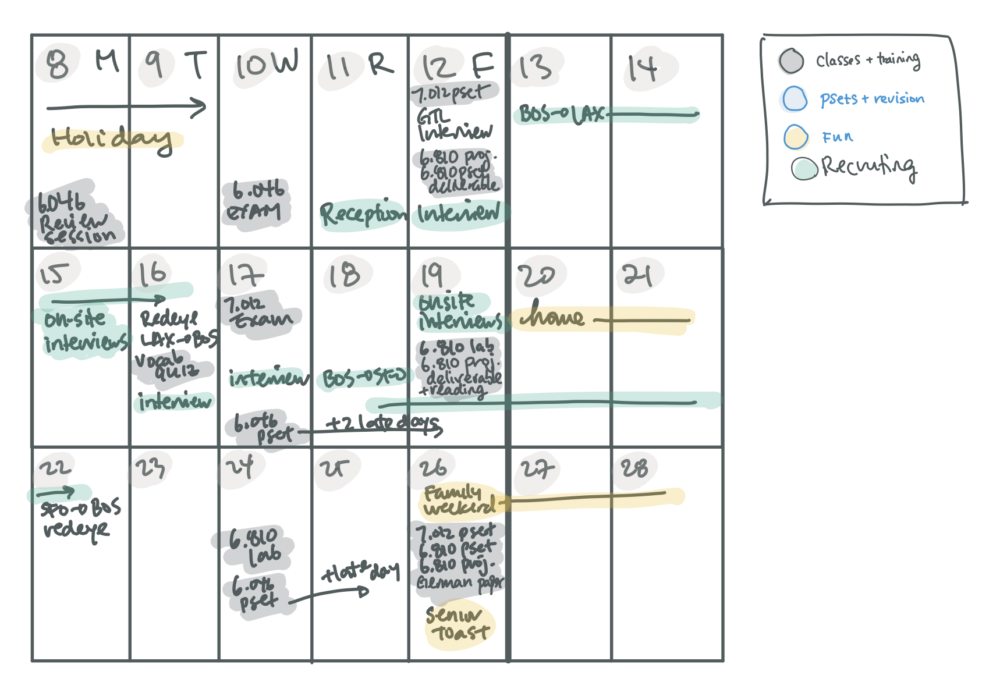 A peek into my life during the last 3 weeks. Adding pastel green to categorize recruiting events. 🗓

I probably just had the most stressful two weeks, ever.

It started off with a conversation with a friend in the wee hours at the Stud one evening (read: morning): figuring out our life purpose, what we want to do after we graduate.

After mulling on that for a night, letting all that existential angst marinate and ripen, I walked into our first 6.046 midterm with a hot chocolate in hand, hoping that would ease the pain and misery and help pass the two hours as quickly as possible. That was the hardest exam I’ve ever taken in my life. Let me repeat that: the hardest exam I’ve ever taken. I kept turning the pages from problem to problem, mind drawn to a blank. By the last 30 minutes, I tried to write down as much as I could praying for pity and partial credit.

Once that was out of my life, I had to switch gears quickly. I had a full-time return offer expiring within the next week, and needed to figure out what I wanted to commit to doing post-graduation. I was running out of time.

The next weekend, I flew to Los Angeles for a final-round onsite at a startup for a full day of interviews. I arrived on Saturday and spent the weekend exploring Santa Monica and basking in the sunshine and the expansive stretches of beaches and boardwalks. I went to this omusubi place that I last had back in 2014, and it still tased just as amazing. I got to watch the sun set on the beach without a worry in the world, soaking it all in in its pristine beauty.

It was nice to get off of campus, for a change of scenery and pace of life. I fed off the relaxed vibes and the creative buzz. No psets or exams here. I made sure to take advantage of all the food options here, too, making sure to stuff myself with quality meals and the variety of options we don’t have here on campus or in Boston. 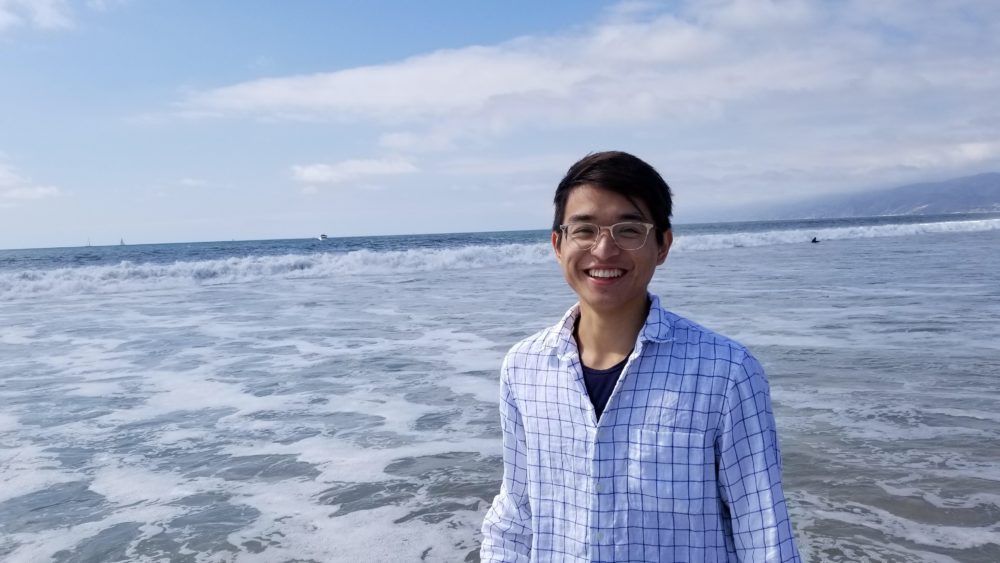 All smiles dipping my feet into the Pacific for the first time in a long, long time. 🏖

Before I knew it, it was time for a red-eye back to Boston, just in time for a German Vokabeltest at 9am.

The next day I was back in the rink working with my coach on new choreography for my new free program. That evening, I got a call for an opportunity to interview on-site at another company in the Bay Area in two days. I got everything booked quickly and prepared myself for yet another trip back to the West Coast. I had a few assignments due on Friday that I had to complete in the labs here on campus, so I had to squeeze them in before I left.

I underestimated rush hour traffic on a Friday evening, and I nearly missed my flight. My mom picked me up from SFO and the first thing we did was stop by In-N-Out. The next morning, I was up bright and early, and had another packed day of interviews from 8:45-3:45, non-stop, even with an interview over lunch. Exhausted, I went back to the hotel to finish up a 6.046 pset. I watched First Man that night to try to forget all the craziness that had happened in the last week, and give myself some time to think through my final offer decision. At 11:57pm PST, I signed my return offer.⁠01 More on this in a follow-up post!

Luckily, I got to spend the weekend at home and enjoyed quality time with my family and my dogs. I had a dentist appointment, went to a local barber, and practiced some driving. 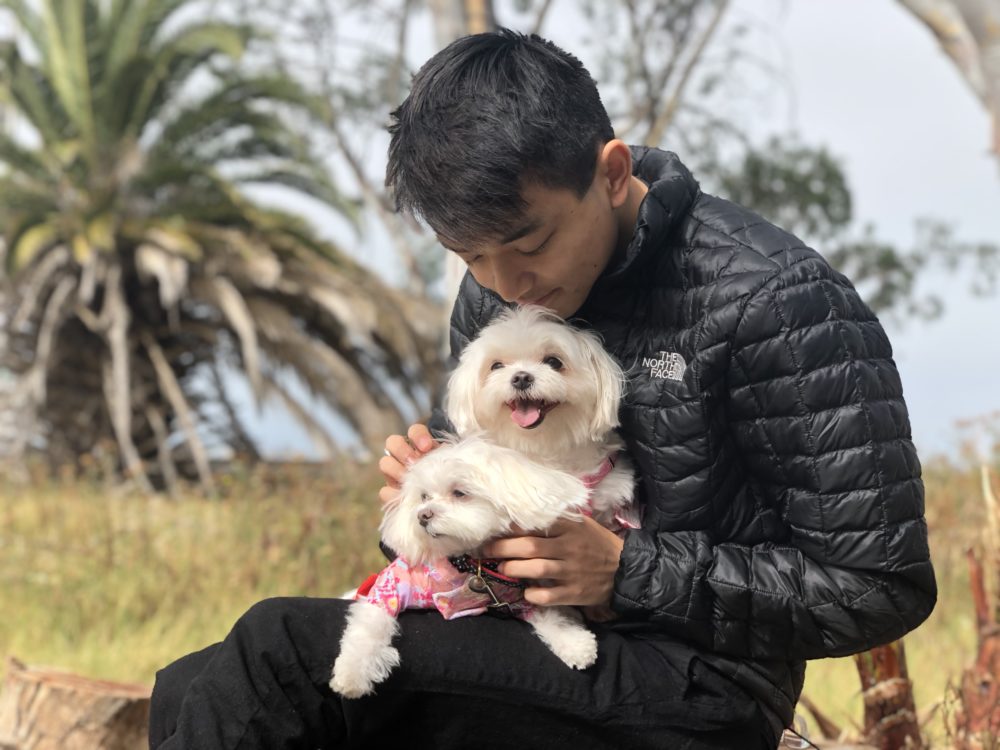 Missed the puppers at home! 😍

I nearly missed my flight back to Boston.⁠02 Yes, this seems to be a recurring theme. I was the last one to board, and sprinted to the gate right as they were starting to close the doors. It was another red-eye, and I didn’t get much sleep. But I had an hour by the time I got back to power-nap.⁠03 After German, I may have skipped another lecture to nap some more. before German at 9am, again. A alum-friend from NYC came back to visit Boston, and we had a relaxing lunch in South End. Still sleep deprived, I managed to get some training done and tested out the fresh sheet of ice at Johnson Arena. I slept early that night. 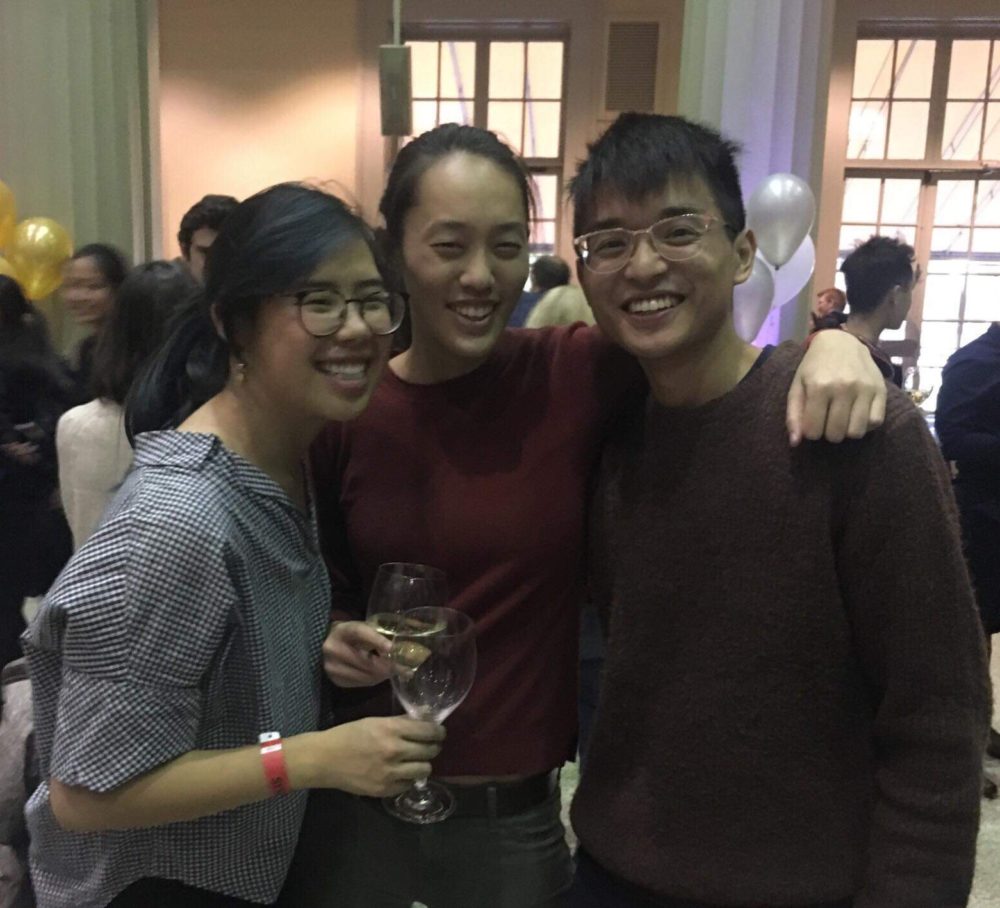 Catching up with friends at Senior Toast. 🥂

Last Thursday was quite a day. With little sleep, I forced myself to get up early to skate from 8-9am before by 9am. I usually skate with my coaches in the afternoon in Revere, but I needed to free up my afternoon for office hours and to finish up my other assignments. The rest of the day I needed to finish a 6.046 pset, a 6.810 project deliverable, a 6.810 pset, a 7.012 pset, and write a German response paper. Somehow I got through it all, and got to bed at 3 something. 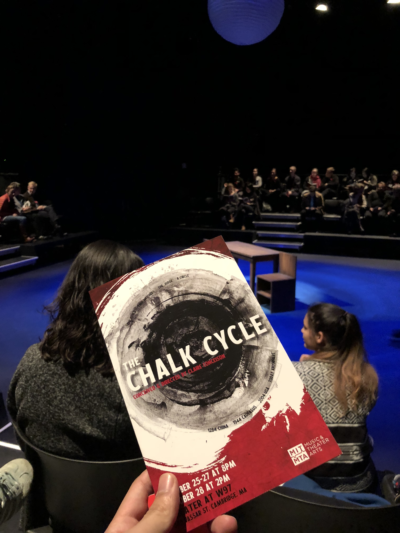 Watching The Chalk Cycle directed by Professor Claire Conceison, who taught two of the three classes I took for my theater concentration. 🎭

Friday was Senior Toast, and I got to catch up with some friends over wine and appetizers. That night I got a chance to watch The Chalk Cycle, a play directed by Professor Claire Conceison, who taught two of the three classes I took for my theater concentration.

It was finally the end of a long week. It felt like a huge burden was lifted, but because I was in a state of induced stress at such a high intensity for so long, I couldn’t fully relax 100%. Funny how stress works. Once I start to relax a little bit, it’s short-lived, like you’re cheating yourself—the stress picks up right back again before you know it.

I had thought the worst was over, that Senior year would be what I had always hoped MIT to be, that I’d have the chance to enjoy it, to confidently navigate the waters and manage it all while keeping sane and making time for myself, my friends, and my mental and physical health. And yet, the past month has been an insane cycle of stress with infrequent bursts of peace and calm. I’m holding out for next semester to be better.⁠04 After this semester, I only have 2 more classes (6.033 and a HASS) and a PE left to take.

But I am grateful that I got to spend some time away from campus, physically removed and transplanted to the other coast, even if it was only short-lived. I needed that break and time to recharge, and the time I spent with my family at home, too, put all the stress and deadlines and craziness into perspective. I’m doing my best to stay calm and go with the flow, even if it’s in the directions of the firehose of stress and of constant stream of deadlines, assignments, and exams, it somehow works out in the end, hopefully.

Saturday I slept in late and spent most of the day fanatically cleaning and decluttering and attempting to get my life together once again. Last night, I had all-you-can-eat sushi and stuffed myself appropriately.

Earlier today I got some skating training done—T-7 days until the NYU Intercollegiate Competition—and got started on another 6.810 project deliverable and another 6.046 pset and started to prepare for my German quiz tomorrow morning.

Right now the city is going nuts over the Red Sox’s World Series win. And I can hear the honking and shouting and helicopters from my room. I put on Max Richter’s Sleep album and catch up on some much-needed sleep to start it all over again next week.

I’ll end Update 2 with a quote that’s been on my mind lately: