what are you doing over the summer?

“this guy is extremely shirtless,” jeff says, pulling up a messenger profile. i peer over at his phone, and indeed, the guy is quite shirtless.

it’s tuesday the 24th and we’re waiting outside a house in mid-cambridge to pick up a desk that jeff bought from someone for $10. it’s a nice neighborhood, and the sun is starting to set, casting a golden glow over the well-tended bushes and glinting through the trees. we passed a playground earlier, along with a yellow house that stopped me in my tracks.

“that looks a lot like a house i saw when we were wandering cambridge during camp,” i say, pulling out my phone to try and find the picture i took.

it turns out it wasn’t the same house — but the blue sky and the warm colors struck a chord in my memory. 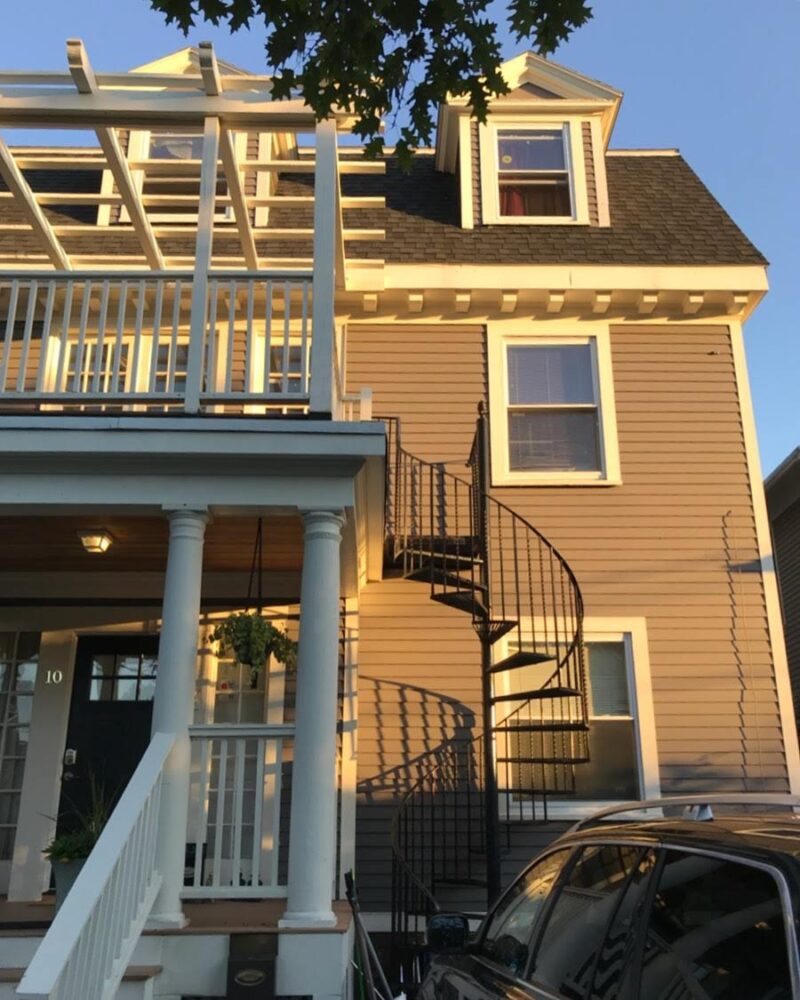 jeff and i met four years ago in the summer after our sophomore year of high school. we were here for a biology camp in cambridge, and we quickly discovered we had the same memey sense of humor. july 2018 was defined by despacito, t-posing,⁠01 i think the first picture i ever took on killian court was of me and the rest of the camp t-posing. a little silly looking back, but you must kill the part of you that cringes, not the part of you that is cringe the phrase “big mood,” and an absolutely excessive amount of ice cream.

jeff is from california, and as someone who went to high school in minnesota, i feel like all californians are weirdly obsessed with minnesota. it’s like they can’t wrap their heads around the concept of a state that has all four seasons (no shade). i flexed my ability to withstand the cold and he roasted me for calling it “bubble tea” instead of boba.⁠02 i've changed my ways since because admittedly, boba is easier and faster to say than bubble tea. i think it was a product of the fact that we had like, one gentrified boba shop (sencha) by my high school that branded it as bubble tea. i loved that place in high school, but compared to boba in chinatown...

we kept in touch and met up a couple times after that, once at a journalism convention in senior year of high school and most recently during my trip to new york for spring break, since jeff goes to columbia. we visited flushing together and spent a few hours exploring all the incredible food options there.

four years later, we’re reunited in cambridge once more. he’s doing some sort of cool brain research and secured an apartment in central square, super close to five spices — one of my favorite restaurants ever. their chili oil wontons remind me of visiting my grandparents in sichuan.

we both have a lot more hair than the last time we were in the same place. he had a buzzcut, and i had just gotten a haircut that, looking back, gave me the appearance of a middle-aged mom. after coming back home, i ended up cutting even more of it off, turning it into a pixie cut. 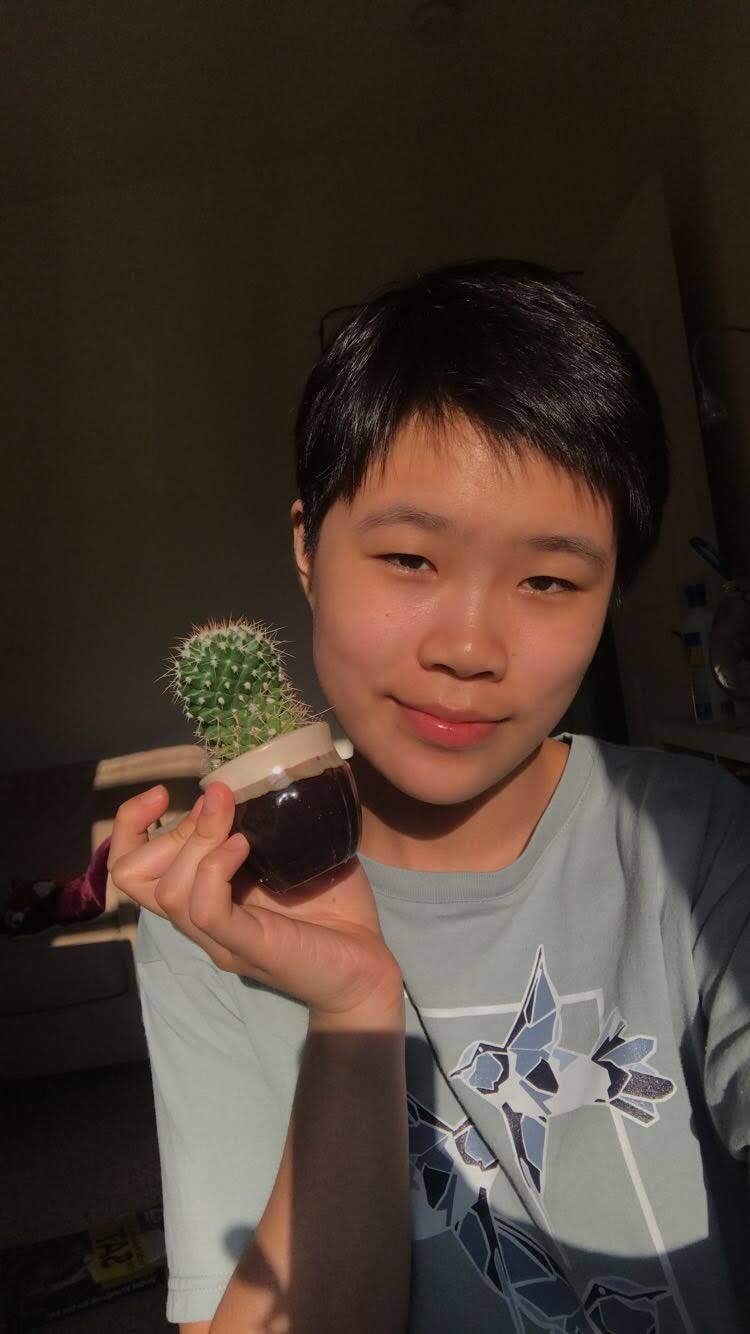 baby me with my short hair!!

and then i spent the next four years growing it out again. it cascades down my back once more, in all its bleached glory. jeff’s grown his hair out too — it reaches his chin now.

there’s some sort of metaphor about hair and growth and change here.

despite the both of us looking quite different, there’s a lot of stuff that’s remained the same, like our humor, even though it’s evolved into your standard “amogus sussy imposter baka based poggers so true bestie yass naur” chronically online mix.

“people at columbia don’t say poggers,” jeff told me. “they just don’t laugh at it for some reason. one time someone even told me to like, shut up.”

this was, quite frankly, appalling to me, and proof that there is something wrong with ivy league kids. here’s one of the signs in the florey kitchen, for reference: 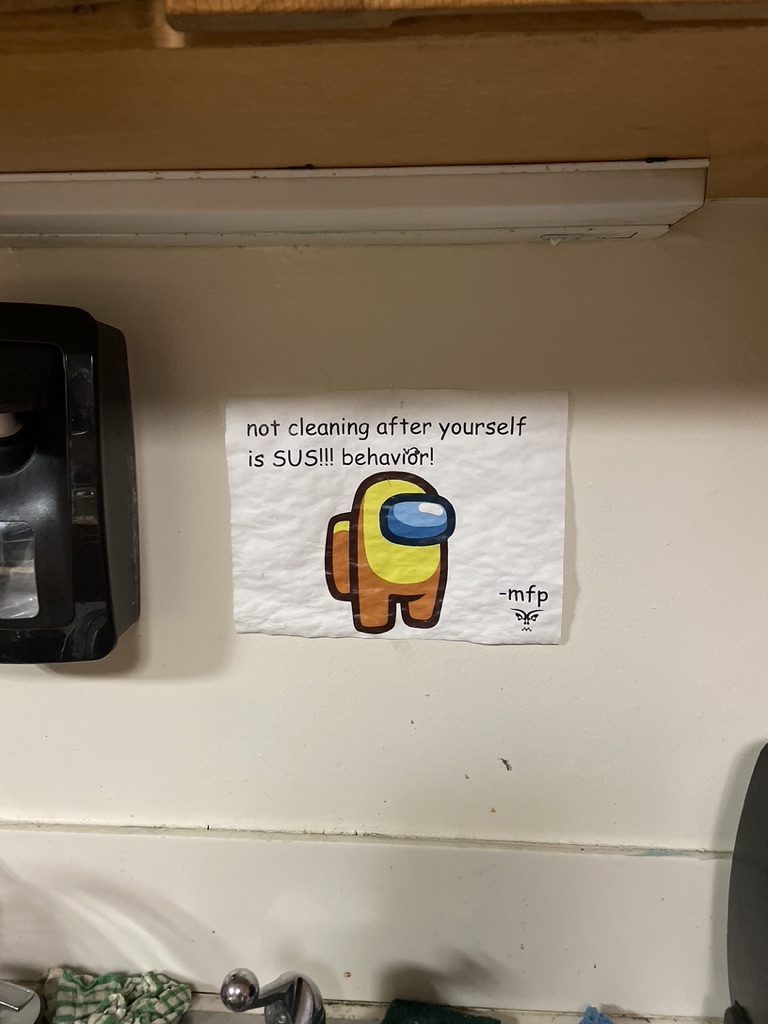 however, i did end up asking one of my other columbia friends about this, and it looks like it probably depends on the friend group.

tiffany is someone i went to middle school with, and we saw each other through the peak of our middle school anime phases. she visited me at the beginning of the school year, last fall, and we got lunch at tatte’s, she introduced me to the concept of shakshouka, and i showed her around campus.

recently there was some news about the hunter x hunter mangaka starting to draw again, and the first person i thought of telling was tiffany — she was a huge hxh fan back then.

i guess i’ve been revisiting a lot of old friendships like jeff and tiffany. a few days ago, my high school friend ryan texted me asking if i wanted to play minecraft with a few of my other high school friends.

willow also managed to dig up files from our senior project,⁠03 a graduation requirement for my high school--every senior gets the month of may off to pursue a project where we worked on building a model of our high school in minecraft since it was the start of covid. we mostly just wanted an official excuse to play minecraft for a few hours a day, but we wrote up a whole official email proposal to make sure it would go through, even citing mit’s minecraft version:

in the end, we didn’t finish it to a level of using it for tours, but it looked pretty nice. 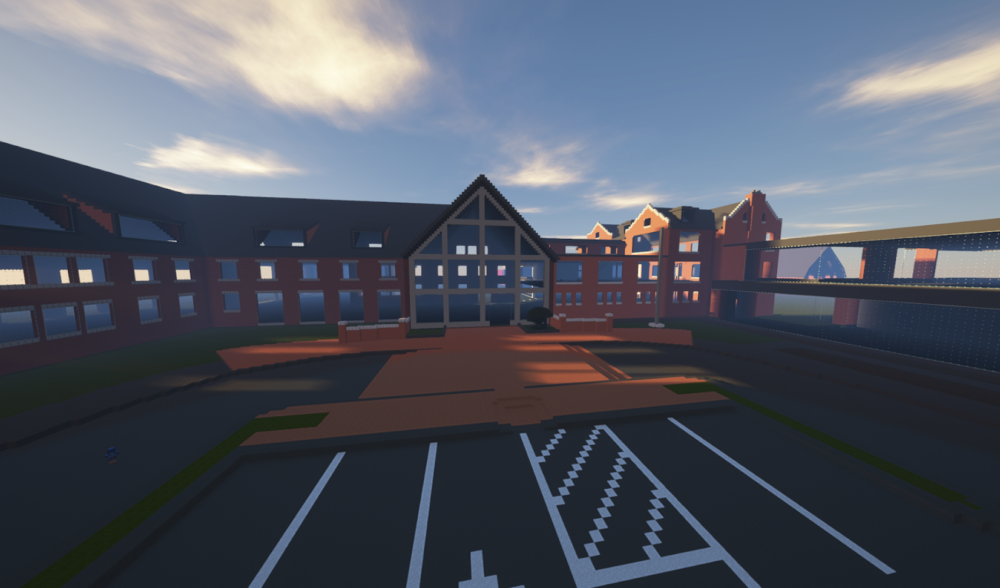 the front entrance of our school

another close high school friend, quinn, also texted me recently, asking if i could look over her short story. quinn’s always been an incredible writer. in our senior year, we were in charge of the school newspaper together — she managed the print version and i managed the website.

it’s a short story that i’ve read before, but this time, she’s added some more details. it’s about a woman with chronic pain who wanders into an open mic night, where she meets someone and realizes some things about how comedy can be used as a way to cope with pain, as well as who gets to laugh at that pain.

i gave her some feedback, we chatted a bit, and then she asked:

“you’re researching over the summer, right? what are you researching?”

i saw it in my notifications and i didn’t know how to respond, so i didn’t open the texts for a few days.

later on, someone else asked me the same question:

“what are you doing over the summer?”

i met this person through audrey c. ’25, actually — she was audrey’s MITPAL last year and now she’s just finished her first year at harvard. apparently she found me through my post that featured quotebots: 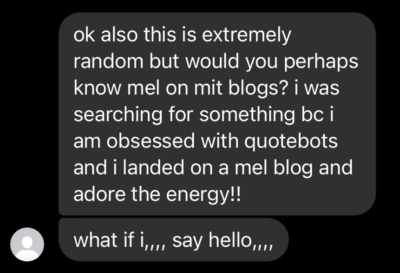 we’ve talked quite a bit over the past few weeks, with topics ranging from phoebe bridgers to the transition from childhood to navigating friendships to the grindset culture at our schools. but when she asked about my summer plans, i once again balked.

it felt like i wasn’t doing anything huge over the summer. i wasn’t doing a big fancy internship like my friends. i wasn’t doing a urop, either. all i was really doing was working at the front desk at my dorm to get free summer housing. i had so much existential dread over updating my resume that i had to wait till chris helped me look over it and add some of the stuff i’ve done.

but that was the problem — i felt like i hadn’t done anything. i felt like the only thing i’d achieved all semester was decrease my gpa.

(which isn’t fair to myself at all, considering the difficulty of the classes i was taking, and how hard i was trying. but it’s a nasty little brain worm that’s dug its way into my mind.)

i took a visit to urgent care and the nurse asked me what i was doing over the summer. i told her.

“that’s nice!” she said, in the middle of typing up my prescription. “i feel like a lot of mit students are always doing so much, but you actually have the time to take care of yourself and pursue some personal projects.”

and i guess i really have. i started drawing again, finally. just some simple anatomy studies and original character doodles, but it’s something nonetheless. 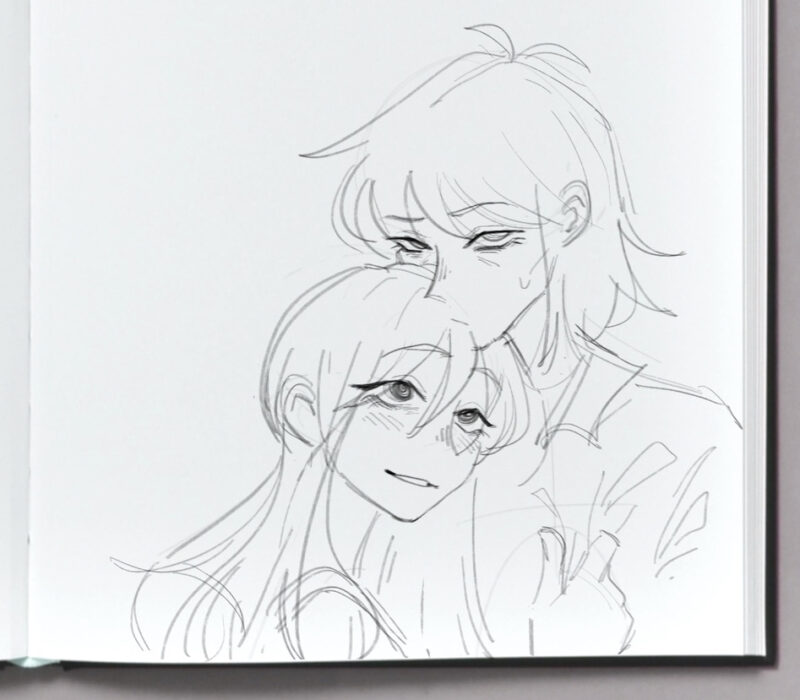 my original characters, roxy and cecelia

and i’ve been voluntarily coding things. i was lying in bed one afternoon and started thinking about how i have to take 6.009/6.1010 (fundamentals of programming) next semester, and i jolted upright because i was like, “holy shit, coding is actually pretty fun.”

what i didn’t like about 6.006/6.1210 (intro to algorithms) is that it didn’t have a lot of hands-on projects other than the coding portions on psets, and it was hard for me to wrap my head around the algorithms without doing it myself. but when i did have to do the coding portions, it felt natural for me to get in the zone and spend a couple hours debugging until i passed all my test cases.

so…i made a leetcode account. i feel like there’s a certain culture that surrounds leetcode, especially if you start taking it too seriously, but i’ve been doing a couple of easier problems. and i’ve found that it’s legitimately enjoyable.

which, whoa!!! i guess i have learned some things from my course 6 classes after all.

despite minimizing the things i was doing last semester, i didn’t get stellar grades. but this place chews you up enough that when given the opportunity to choose self care, it’s a wise decision.

so this summer, i’m going to keep catching up with old friends and i’ll reach out to people i didn’t get to spend much time with during the semester. i’ll go to my morning shifts at desk, and shop at trader joe’s, and draw things that make me happy, and cook good food for myself, and keep my room clean, and code things just for the fun of it.

most recently, i was given the opportunity to do some research with distinctive collections and create a digital archive for east campus history, with funding through sts.⁠04 the program for science, technology, and society which is really exciting! i took sts.s20⁠05 Tales of Two Parallels: Documenting East Campus History last fall and it was really cool to learn more about ec culture. i think it’ll be even cooler to design a more accessible place to put all of the things we discovered in that class.

i’m doing things that i’m genuinely interested in. and that’s more important than anything.