With the influx of the 24s terrorizing (see: joining) various Discord servers I’m a part of, I’ve realized that there are certain things about MIT that I’ve picked up on that I realize are not quite the norm. Being home around my family who does not know a thing about MIT while simultaneously having to explain how MIT works to curious 24s has made me realize that there is…a lot about the school that a lot of people don’t know about. So, I decided to make a blogpost of things-I’ve-had-to-explain-to-non-MIT-people-a-lot so that when YOU are asked all these things, you can just link them to this post. Moreover, I also made a list of things-people-think-about-MIT-that-actually-aren’t-true-ya-dinguses because I am so tired of repeating the fact that yes, MIT has good humanities.

Let me repeat that.

Note: I, of course, won’t expose all of it because I think one of the fun things about going to college is having to relearn and adapt to this new environment. It’s extremely gratifying when you befriend upperclassmen and they give you the latest tips and tricks on how to not die at this new school and you just feel really cool when you’re like, “Hey guys I know this secret URL that tells you everything about this class and can help you do things” and you just become a god among your small group of innocent baby frosh. One of my favorite parts about this semester was figuring out these little hacks and easter eggs about MIT.

Things at MIT that seem normal once you’re here for a while, but you realize are not, in fact, normal

“What classes are you taking?” – Our Number System

In non-MIT speak, I’m a double major in comparative media studies and computer science and this past semester I took Intro to Solid-State Chemistry, Intro to Western Music, Calculus I, and Physics I.

A lot of people complain that this system is not normal and inconvenient and it takes a while to memorize. However, it really, really isn’t that bad. You pick up on the numbers really quickly. Within two weeks, I think I knew the majority of the majors at heart and even if I didn’t, you were able to ask and people would explain.

I really think it’s more convenient to say numbers rather than having to recite the title of every class, so I personally prefer the number system! But also, I’m very biased.

Along with our classes and majors using numbers, our buildings do, too! And no, the building numbers do not correspond to majors. I have not yet memorized all of the buildings but I know the ~general~ layout of MIT decent enough, but there is definitely a lot I still do not know.

First-years in their first semester at MIT are put on the “Pass/No Record” grading system. PNR is an absolute blessing and I’m forever grateful that MIT has this system implemented. It makes the transition from high school to college much smoother and allows freshmen to have time to explore and socialize, rather than being cramped in their rooms stressing about their grades. Our second semester is then on A/B/C/No Record.

I think this is one of the best things about MIT since no other school really has P/NR? Some schools have Pass/Fail, but I haven’t seen Pass/No Record anywhere else. (If you have, let me know!)

Mailing list culture at MIT is very Prominent. Essentially you can make infinite MIT mailing lists to communicate quickly with certain groups of people, send out information to students, or also just Entertain the People with random content.

For those of you who have no idea what I’m talking about, here’s what you can look forward to if you ever decide to go to MIT: 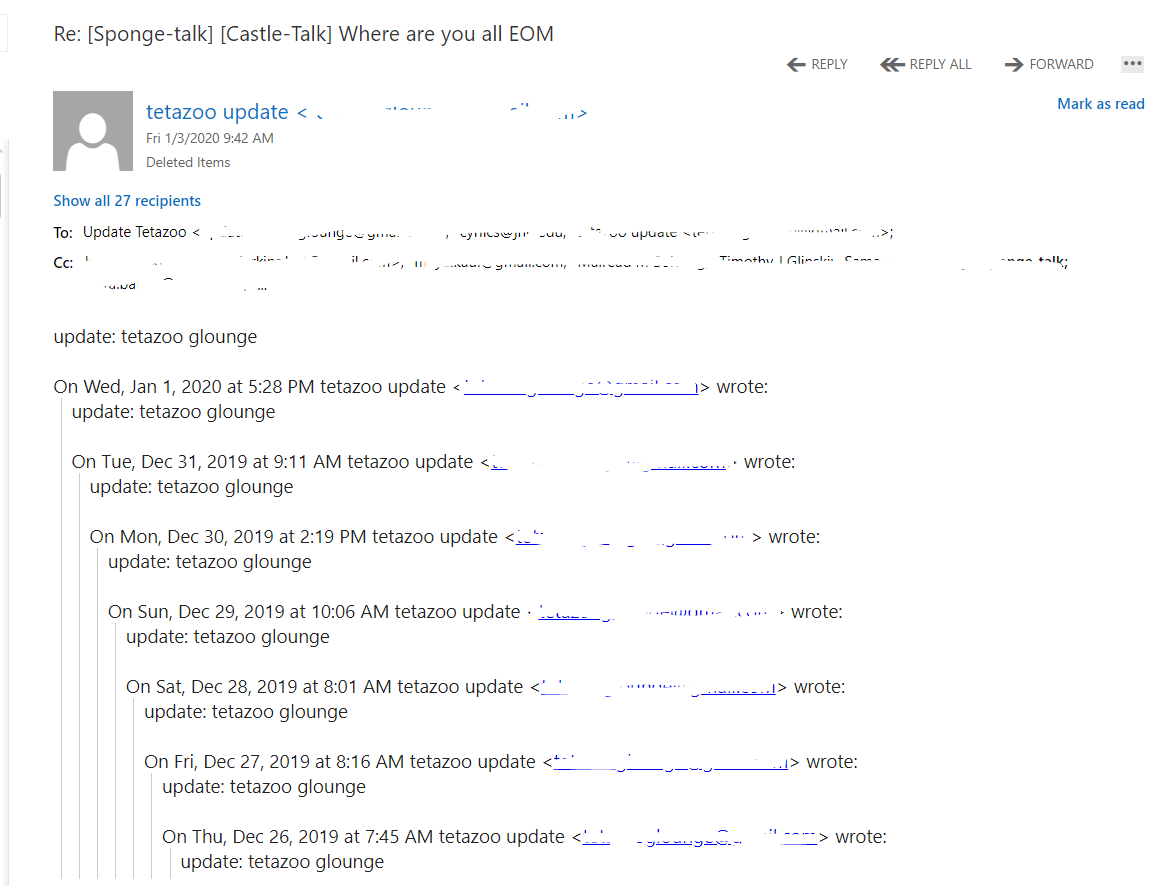 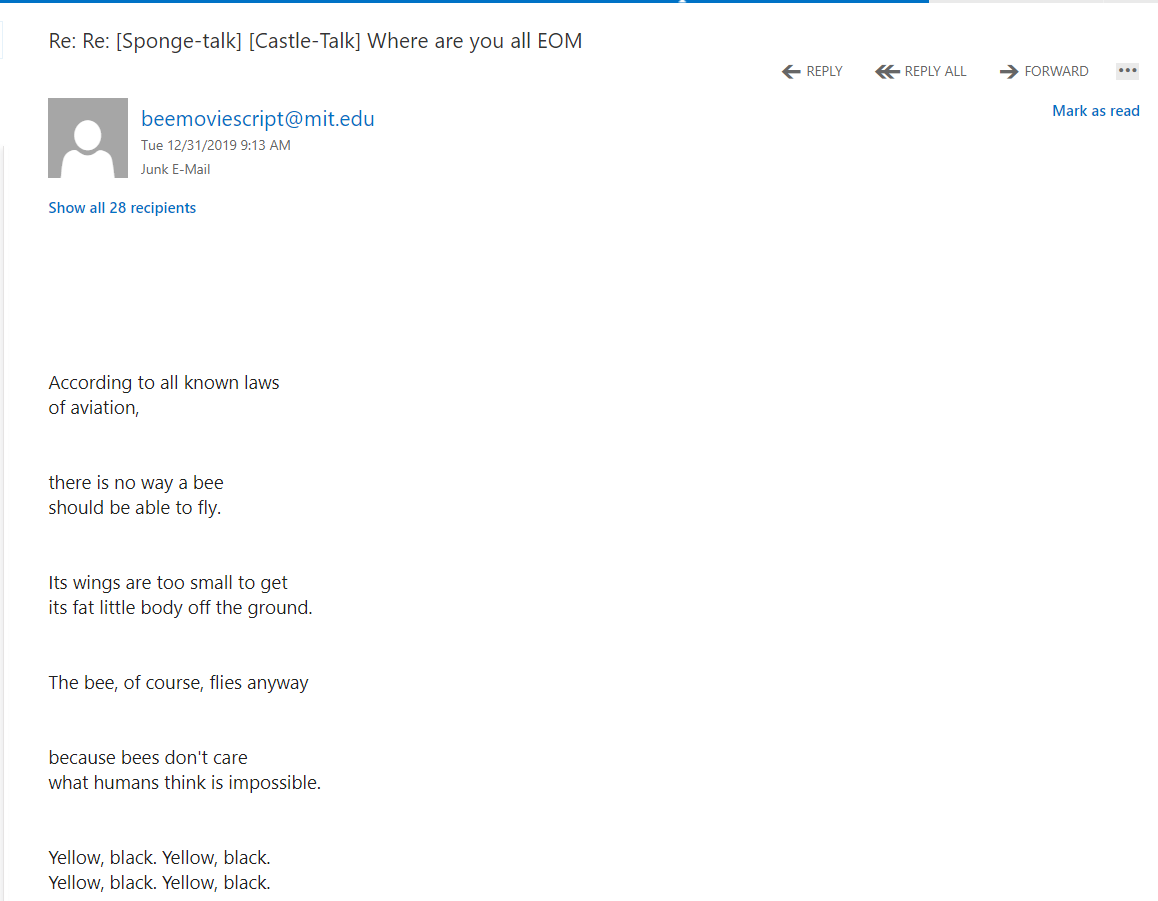 i managed to filter this and tetazoo glounge out, thank u god 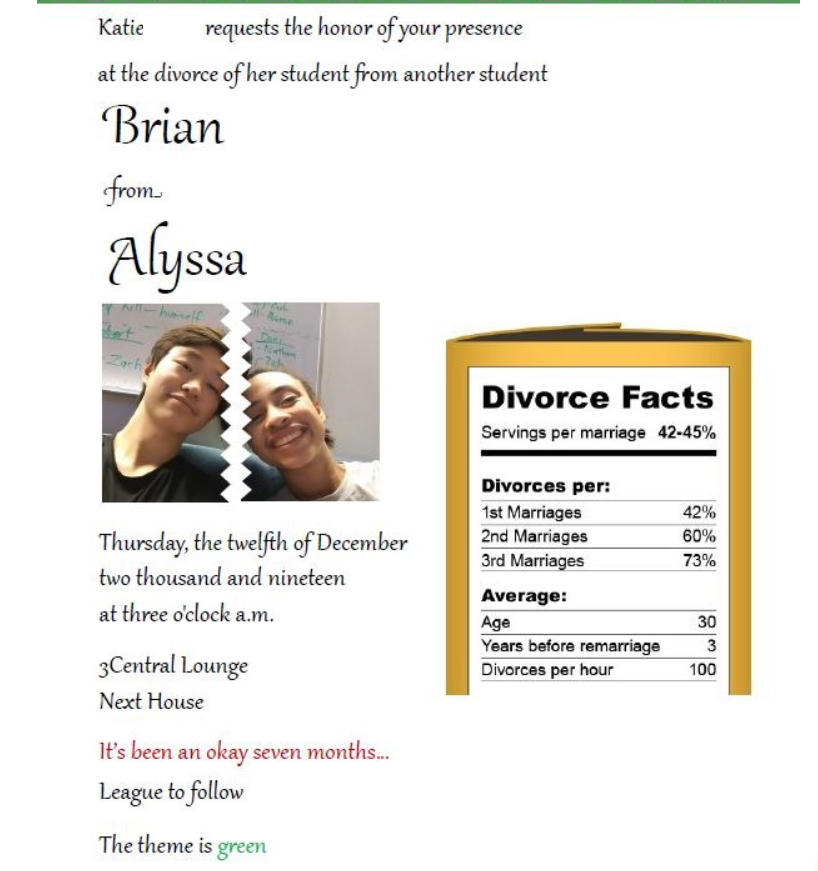 We also have our own mailing lists for inside jokes, such as the Cube Solvers Mailing List, Snoop, people who don’t live on Loop but are on Loop too much, and Loop Boyfriends.

You just got to come to find out.

The MIT tunnel system is one of my favorite parts of MIT, despite only being officially in ~The Tunnels~ maybe once or twice. It’s a really convenient way to navigate campus and avoid the cold and there’s some really gorgeous artwork in there. Another fun thing to do is go chairing down the tunnels!

Cook for yourself for first years

A lot of people ask me “What’s dorm hall food like at MIT?” to which I reply with “It’s okay, but I cook for myself so I rarely go” and then we get the whole ” YOSDFOAEYAOSDFKLEW YOU   C O O OK FOR YOURSELF??!?!?”

Yes! Frosh can live in cook for yourself dorms right away, you aren’t required to have a meal plan! Also, we don’t have first year dorms; instead, you’re put into a dorm with a beautiful mix of upperclassmen and frosh alike! It’s really refreshing to be able to have this freedom to mingle and mix with people.

Cooking for yourself is a lot cheaper, but maybe not as convenient, depending on your cooking experience. I entered MIT with z e r o cooking experience and I mainly would just buy ingredients for my friends to use, and they’d later feed me with whatever I provided for them. It’s a pretty good system and I enjoy it a lot, but I do want to get more experience in cooking for when summertime hits and I no longer have my trusty friends Aiden and Mariia to cook things for me, so I’m currently working on a spicy IAP post that will document Cami’s Crazy Cooking Adventures, from nearly burning down Random to eating food that tastes like shit but eating it anyway because I made it to the small, rare successes for when I do make good things.

In addition to having sororities and fraternities, we have things that don’t fall into that category called Independent Living Groups! These are really cool, small tightknit groups that typically own pretty large houses and are cook for yourself ‘dorms’. I’m actually really interested in WILG and might consider rushing this spring!!

On the Opposite End: Things that people expect MIT doesn’t have, but we do!

Our humanities classes are amazing and if you’re on the fence about coming to MIT because you don’t know if you’ll be able to fulfill your humanities needs, here is a post for you! Everyone I’ve met at MIT, yes, loves STEM, but simultaneously has some artistic or creative outlet. Mariia is interested in theatre and makes beautiful paintings. Aidan’s incredible at music composition. Emma loves dance and singing. Aiden crochets and knits A LOT. Caroline has a passion for music and playing music.

There are plenty of opportunities here at MIT to see your artistic and creative passions through, whether that be through cross registration at Harvard and MassArt, or just taking classes here. I just took Intro to Western Music this past semester and it was one of my favorite classes of my first semester. I actually learned a lot and it improved my writing skills immensely, teaching me how to approach writing critically about music.

We have PE requirements! That’s, like, a thing! And we have really cool PE classes, from fencing to rifle and pistol to scuba diving. I took Intro to Weightlifting for Women this past fall semester and it really taught me the fundamentals of lifting and inspired me to go to the gym consistently. This IAP I’m taking pilates and I’m really excited since I haven’t done pilates since junior year high school. Can’t really comment much on sports since I don’t really know much about it, but we have sports here! And they’re cool. Emma’s on the varsity volleyball team here. I remember I went to a game and I had SO much fun. The energy is insane and the crowd always gets really riled up. It’s overall such a good time and I recommend going out to our sports events!!

MIT’s gym near dorm row, The Z Center, is probably the nicest gym I’ve been to and yes, people at MIT get fit and are swole. I love the Z with all my heart and I missed her so much when I was at home. One of the first things I did when I got back was go work out. If you go during the right hours, it won’t be full! But if you go probably around 5-6ish it’ll be absolutely p a c k e d. We may be a nerd school, but we’re a swole nerd school.

A little over 50% of MIT male undergraduates are in a frat. This is a thing! Frat life here is active! And frats here are fun and nice and we love them!

In fact, we have, in my humble Onion, the best parties in the Boston-Cambridge area. I will not add further comments on MIT parties, but just know that I go to them a lot and they’re very fun.

There’s a lot that MIT has to offer that might not be very well-known, some things you can only find out if you visit or talk to upperclassmen. And even then, there’s a lot you don’t know until you’re even a student!

Every day I’m still learning and finding new things to fall in love with here at MIT, strange little quirks that I wouldn’t be able to find anywhere else.

I really hope this IAP I get to explore a lot more :o)