For those of you who know me well, you’ll know that I did not cook at all my first year of MIT. I had made promises to earlier, but never really fulfilled it, relying on my friends and my boyfriend, as well as a nice Snackpass ambassadorship, for sustenance.

Now, living on my own with friends in Washington, D.C. and wanting to save money for future endeavors, I’ve decided to get my shit together and actually learn how to cook.

I wanted to document my first week of “actual cooking”, showing you the very easy and simple meals I put together for myself.

Also, for context, I’m currently doing 16:8 intermittent fasting, where I have an eight hour eating window throughout the day (typically 1pm to 9pm). I’m also trying to be a little more conscious about the food I intake, trying to lower the random sugar and carbs I eat throughout the day and replace it with “better” foods. I also wanted to try my hand at baking since I tend to enjoy baking a bit more than I do cooking.

I decided to try my hand at an omelette. After watching Binging with Babish’s video on eggs, I was pretty confident in my abilities. I unfortunately don’t have a photo of it, but it consisted of:

It was really good and I was really pleased with how it turned out. I’m a big fan of omelettes and it was really surprising that they were that easy to make.

At around 3, we headed out to two different grocery stores, Giant’s and H-Mart, for some supplies. I had some ingredients in mind, mainly fruit, meat, and vegetables, but I ended up picking some random baking supplies, ice cream, and a couple of snacks on the way.

For dinner, I ate some leftover poke from the day before.

I decided to try my hand at making a smoothie, since I had access to a blender and had never really experimented with it before.

My smoothie consisted of:

I don’t have the measurements, unfortunately, as I just kind of eyeballed everything to my tastes. 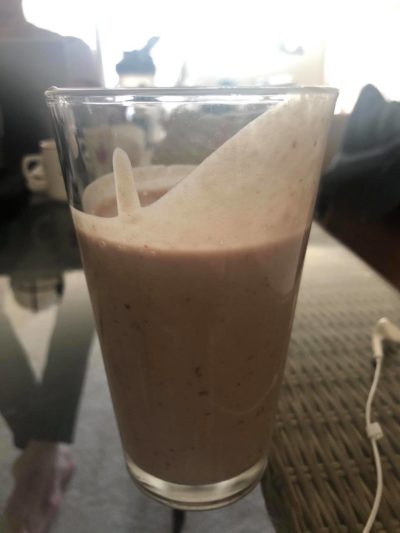 Though it doesn’t look the most appetizing, it was really tasty and I enjoyed it a lot. Plus, it was super filling.

For dinner, I steamed some bok choy and cooked some marinated meat I found at H-Mart. It was pretty good! I’m trying to cut back on carbs, so I didn’t add the usual rice I would have. 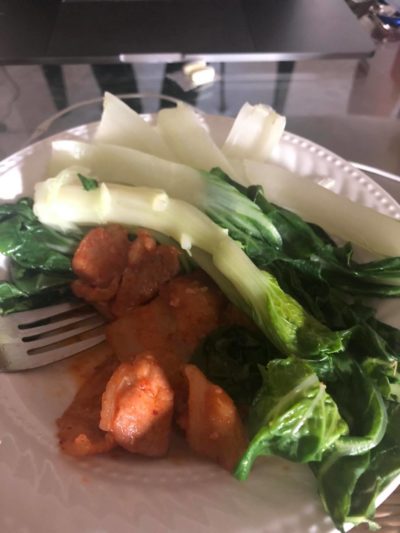 Then, I whipped together my favorite dessert ever: crepes. This was my first attempt, so I wasn’t really too sure what I was doing and I ended up botching the first couple of crepes.

(Note: I wasn’t letting it cook long enough. In the original recipe, it says cook for 30 seconds on each side, but my aunt told me I didn’t have to follow this strictly and I ended up making it again later in the week while eyeballing the cook time and it turned out much, much better.) 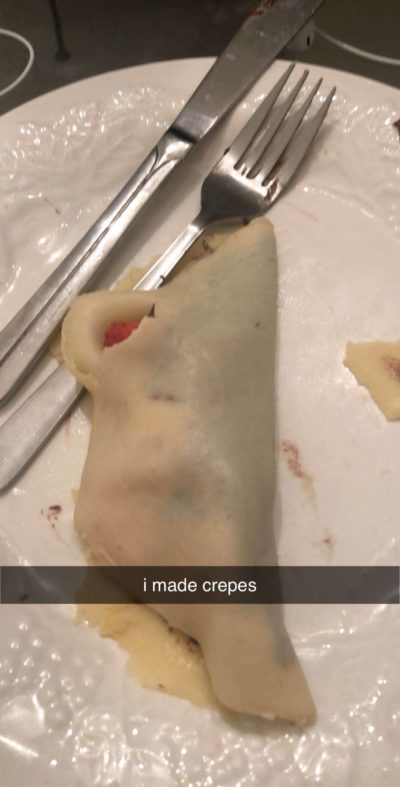 As you can see, they’re super floppy and slightly undercooked, but nevertheless they were edible and kind of okay? I added strawberries, bananas, and Nutella.

For Tuesday’s first meal, I had some Chobani greek yogurt with chocolate granola, strawberries, and blueberries. 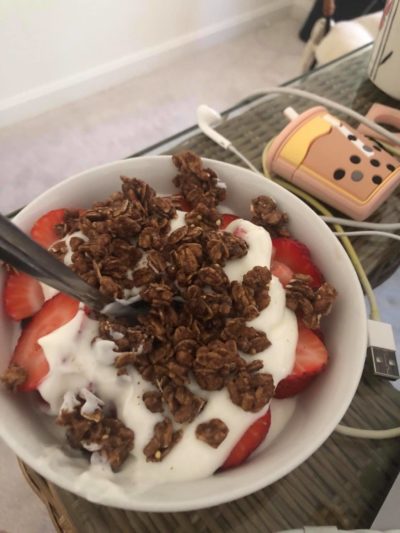 This was one of my typical meals back at MIT so it was really comforting to have it again.

Then, for dinner, I had another omelette! Wow!

This omelette this time had bacon and avocado with it. 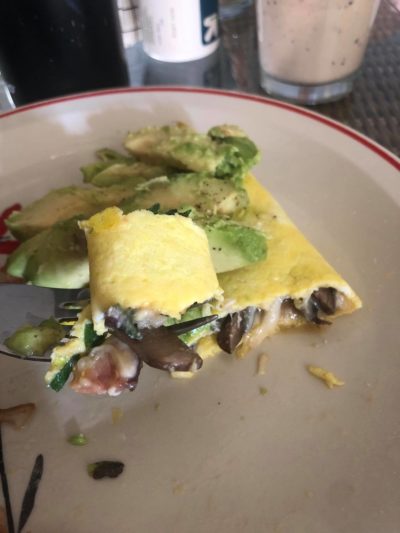 Whenever I make my omelette, I cook the filling separately from the actual omelette itself and dump it in while the egg part is cooking/nearly done. This allows me to season everything to my tastes much better.

I tried my hand again at crepes again today, this time actually taking my time with cooking it. It ended up so much better than I thought. I had texted my aunt, who had passed unto me the original recipe. After texting her telling her I was saddened by my floppy undercooked crepes, she told me to 1) let them cook for as long as needed and 2) just use my hands to flip them since the pan doesn’t get super hot anyway.

I felt extremely and incredibly professional flipping everything with my hands, which was super cool. 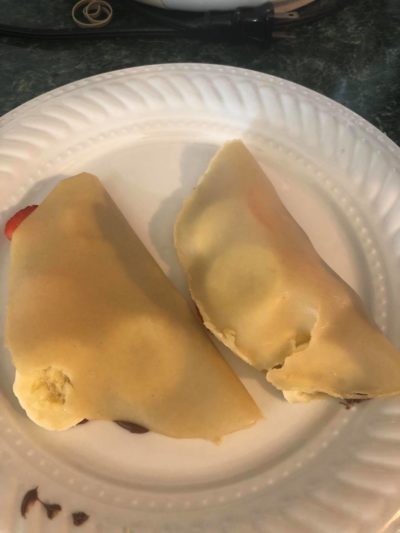 My internship gives us UberEats vouchers every week so I was able to use that on poke from PokeHub. 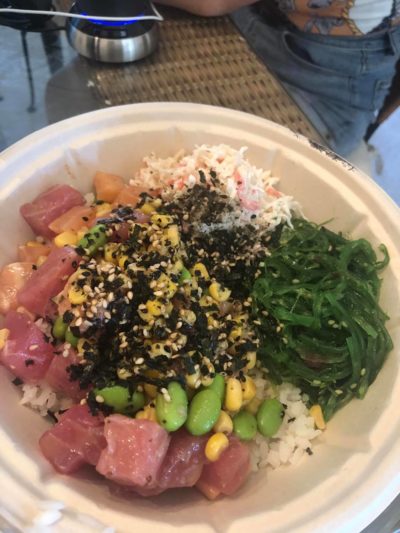 I’m actually unsure of what I ate for breakfast this day, but Mariia ended up grilling some vegetables and sausages for us to eat while we watched The Hunger Games trilogy. 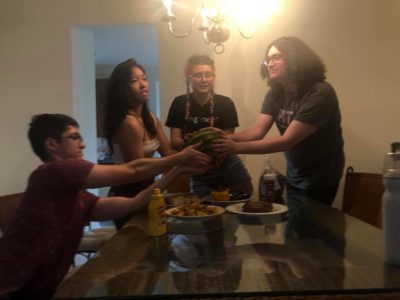 Fun fact: This movie is the very movie that would tear our friend group apart. I would like to call it: The Hunger Games plotpoint. For context: We’re very divided on one of the characters, Peeta. Mariia and I think Gale’s better than Peeta and Peeta’s kind of annoying. Emma and Kylee think he’s really hot and are deadset on protecting their #babyboybakerboy.

What team are you? #TeamPeetaisUseless? Or #TeamPeetaisMyBabyShutUpDontTouchHim? Let me know.

We took a two and a half hour trip to meet up with our friends from MIT, Wenbo W. ’23 and Mriganka M. ’23, at Lake Anna. We ate Lunchables, cheesey popcorn, and watermelon alongside the lake. And we were slightly horrified by the amount of people without masks there. Don’t worry, we ate in solitude, away from the crowds and the masses, hiked on trails, and just had a great time.

So far, I’ve been doing pretty well in cooking for myself and I’m pleased with how far I’ve come and that I’ve been able to sustain myself and work out consistently and just overall be happy with my meals. I think there are moments where I’m still a little bit unhappy with my body and my little pudge, but it feels nice to be in control of what I eat and when I eat. This was a pretty big part of what made me kind of unhappy at home was that yes, I got great meals and I got great food, but simultaneously I couldn’t spontaneously decide to cut carbs or lower my carb intake. Rather, I just ate what was placed on the table. Now, having control makes me feel like I’m taking more accountability and responsibility with my health. I also just feel this newfound independence in being able to walk through a grocery store and point and choose what I want, as well as having the funds to purchase the foods I want.

A lot that I’ve learned is self discipline, as well. I still need to treat myself a bit kinder. I beat myself up a lot if I break intermittent fasting, say if I eat after 9pm or eat an unnecessary amount of rice in a day when I definitely should not have. But usually I just remind myself that I can bounce back the next day and that it’s okay.

Who knew a cooking journey could have this much self reflection?

*Crepes can be stacked once cooled and stored in a plastic bag or wrap in fridge for a few days or freezer for up to 2 months. Thaw on rack before gently pulling apart. Use parchment paper between crepes to make easier to separate.