Creating the MIT-verse by Audrey C. '24

behind the scenes of this year’s pi day video!

If you haven’t seen this year’s pi day announcement video yet, please do! Angela ‘24, Karthik ‘22, Emily ‘22, and I spent who knows how many hours working on it starting from last fall, throughout IAP, and all the way until the day it came out. We (the exact same crew) also created last year’s pi day video, which you can watch here or read about its making here.

I dragged Angela into talking about this year’s video creation process, so without further ado here it is!

Angela: soo we sat together and brainstormed how we can get away with having several different art styles we brainbarfed at each other for a bit and Audrey came up with something good.

Audrey: lmao i don’t remember if that was me but we chose Spiderman: Into the Spiderverse as our inspiration cuz we really like the animation style and multiple universes would let us do multiple art styles in the same video. and we also liked the idea of how there are so many dimensions to MIT.

Angela: what is this work relationship bureaucracy we’re in? we had to be corporate with them [MIT Admissions] and give them a powerpoint before we could proceed with anything. but our bosses sometimes buy us boba so it’s okay

here is the title slide of said powerpoint:

title slide of our storyboard slideshow

Audrey: our boba bureaucrats liked it enough, so “Into the MITverse” it was. For each universe we included some sort of a mood board, so here’s the one for the fungal blob scene. 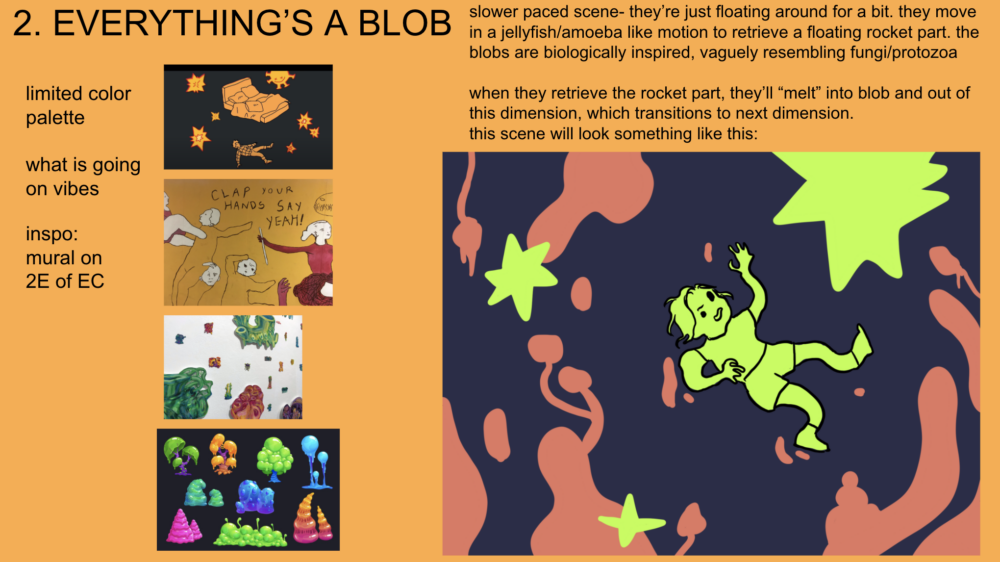 Audrey: of course we also had to have a protagonist. did we ever give this person a name?

Audrey: oh wait we probably shouldn’t put that on the Internet.

Audrey: yea let’s keep it that way. didn’t Kellen suggest “Stephanie” because it sounded like “step on me”?

Angela: Is that any better?

Audrey: sure. so we went back and forth for a bit trying to decide whether our bebe should be a boy or a girl. we ended up choosing neither and just them androgynous and/or nonbinary. 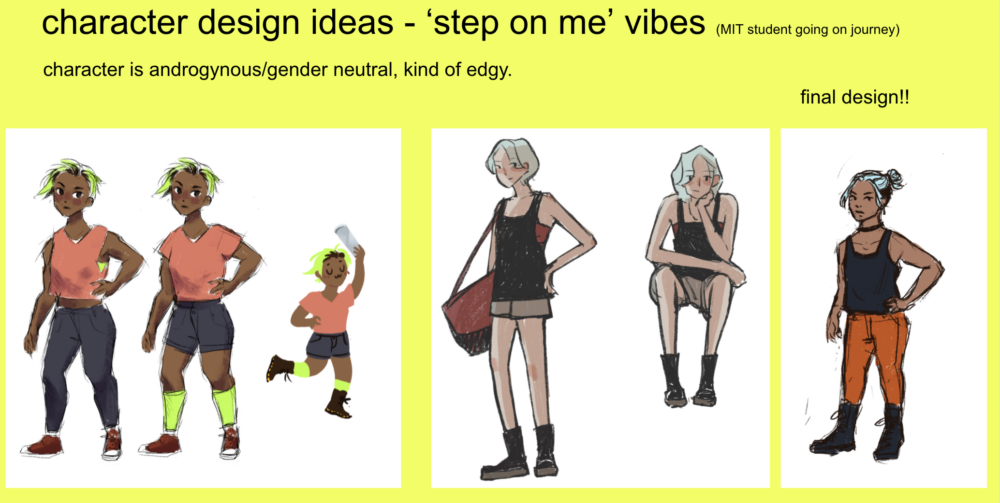 Audrey: Because we’re noobs who have yet to learn how to use prOfeSsioNaL animation software, we drew everything frame by frame in Procreate (again).

Angela: ok so my recitation professor never finishes his thoughts, he’d just start a problem and finish with “just trust me” and “easy easy” instead of the solution

Angela: that’s so random though

Audrey: yea but it fits the vibe

Here are some random stills:

me too, me too
fwoosh
fwooosh again
purple mit
we didn't end up using this scene in the final cut but enjoy our bebe's naruto run
"queercode.py" hehe get it?

Audrey: this part was so cool that it deserves its own section.

Angela: this was the part where we conned fancy oil pastels and eventually posca markers

Audrey: when Angela drew up all the lineart and uploaded them to dropbox, I expected there be maybe 30 or 40 frames. but when I opened the folder I ..,kept scrolling. there were 119 frames!!! why are you such an overachiever Angela ?!!

Audrey: oh wait I literally remember you saying, “the more frames we have to color the more pans of pastels we can con from them”

Angela: we initially thought we’d just ask for two boxes but we ended up getting four boxes of *fancy fancy* pastels. hehe.

Audrey: yes but the consequences of embezzling pastels was that we actually had to color everything. “we” as in 80% Angela. the sky color changes because we were running out of blue.

Audrey: fine we were running out of the sexy blue across all four boxes, so props to Angela for having the foresight to request all those boxes. 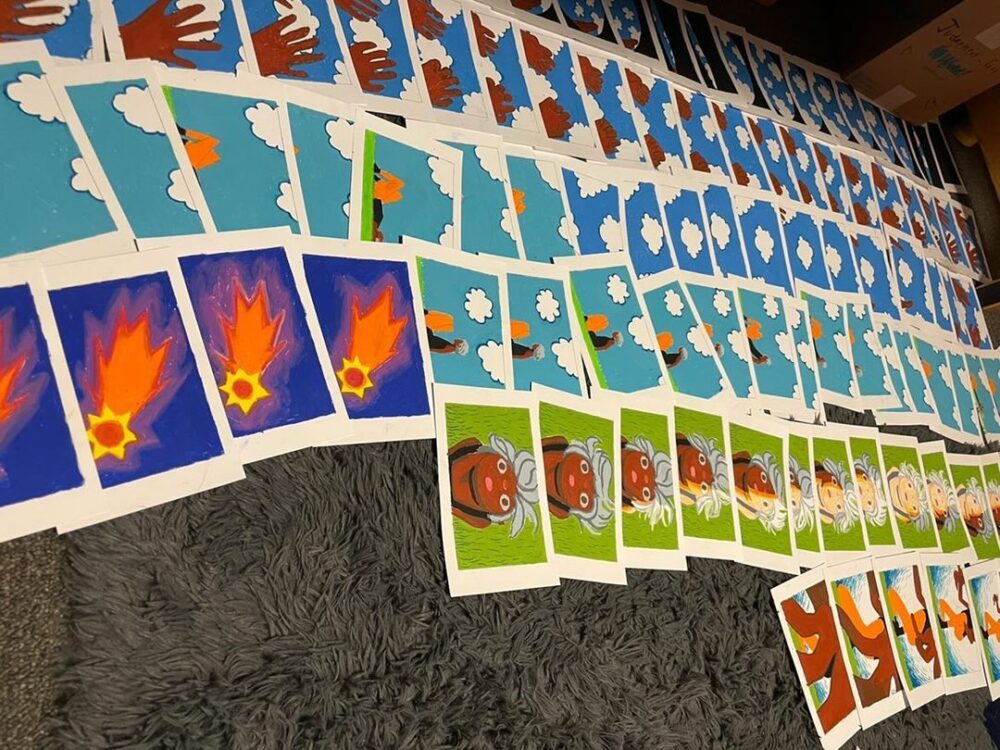 Audrey: Karthik was our music man again this year.

Angela: Karthik is a legitimate genius. We put together a musical moodboard in the form of a spotify playlist

4. Putting it all together

Audrey: bless angela’s heart for taking on all the editing

Angela: let’s choose an organ I actually have

Angela: how about my left lung? it’s probably very large because I don’t have a heart

(editor’s note: angela does have a heart, don’t worry about her)

Angela: the editing was very fun. lots of late nights jamming to britney :”)

Audrey: is that how you spell britney? ok yea she only has one ‘t’. But for real, bless all of angela’s vital and vestigial organs, I got to be lazier with my animations and just leave a lot of it to angela’s editing magic. 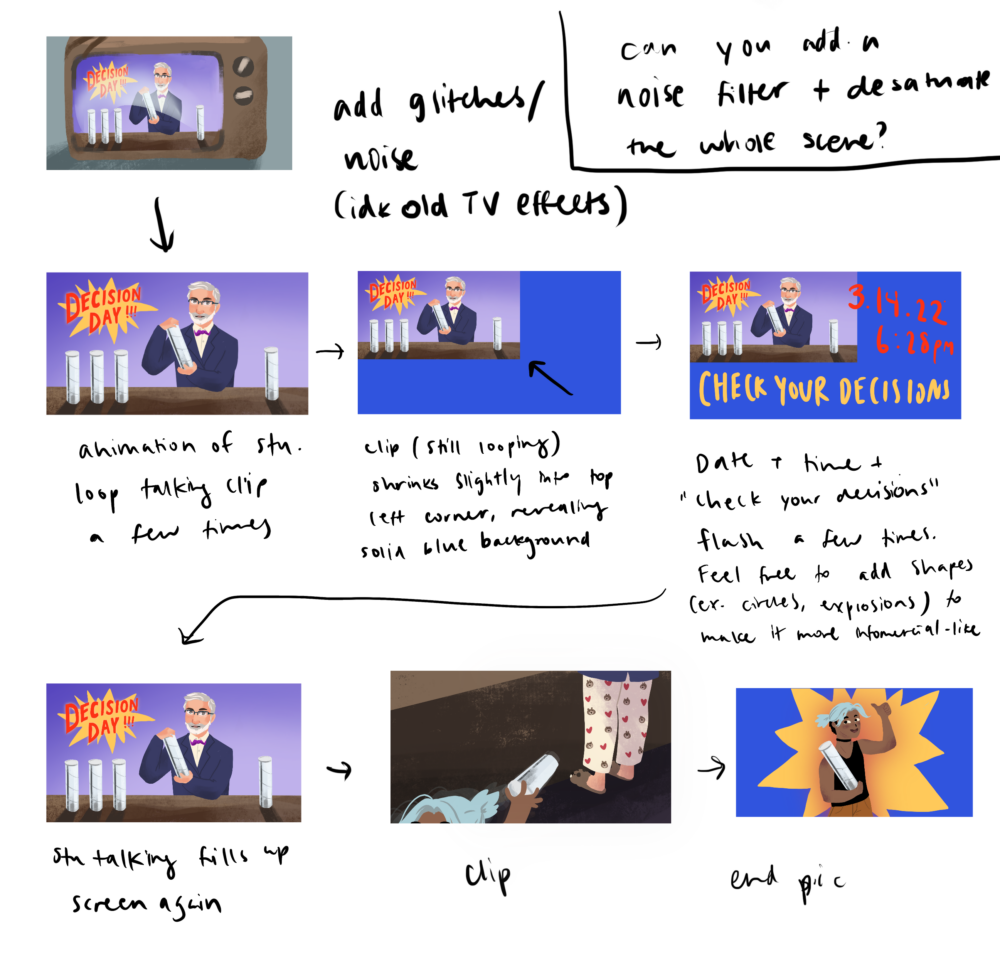 Audrey: there’s no way I’m writing 5,000 words about this but I’ll give it a mention:

Angela: Kellen mentioned that we should give Stu Schmill⁠02 Dean of Admissions and Student Financial Services a cameo, so he became the retro TV announcer guy. we kept joking that we’d put Kellen’s phone number in this scene in one of the explosions.

Angela: we actually have his number. but we’re so nice; we didn’t do it. we didn’t even include his number in our animation drafts to scare him.

Audrey: how do we end this blog?