dealing with loss by Ankita D. '23

until this year, I’d never really experienced loss or old age firsthand. my relatives who have passed away did so before I was born, or when I was too young to have any conception of what death is. more so, most of my extended family lives in India, so being raised in Nashua, New Hampshire meant that the experience of old age was far beyond my perception.

however, in the past few weeks, I’ve been confronted with more and more evidence that life is, indeed, inexorable. the weekend before classes started, my host grandfather passed away, and two weeks ago, my cat was put to sleep.

I met my host grandfather in my freshman year of high school, when I visited Japan on exchange for the first time. he lived right next to my host family’s house, so I’d visit him and my grandmother whenever my host parents and siblings weren’t home. he was always cheerful, lighthearted, and brimming with stories from his many travels. he taught me how to play shogi and how to tend to his garden, and he took me all over Nara to show me his favorite sights.

I visited my host family every time I went to Japan⁠—which was every year of high school. the second and third visits were brief yet blissful, and one the fourth one, I brought my mom along. she got to spent a few days with my entire host family, which was an insane crossover. this was after I got into MIT, so I brought a lifetime supply of MIT merch for everyone. since my host sister had visited me in 2017 and Nisha had given her a MIT tour, they were all very appreciative. 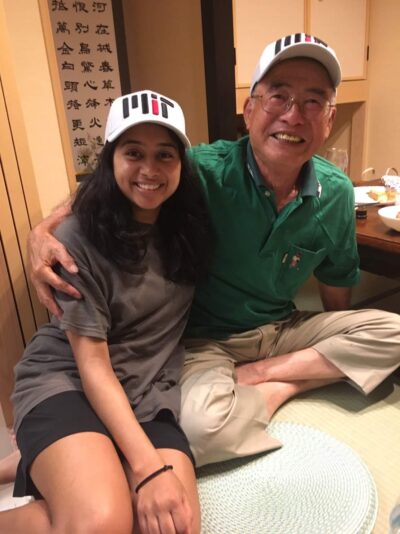 ojiichan wearing the mit hat i bought him

two days before the spring semester started, I found out that my grandfather passed via an Instagram DM from my host sister. it felt like such a ridiculous way to receive such monumental news that I read and reread the message dozens of times, praying that my Japanese speaking capabilities had degraded to such an extent that I simply wasn’t interpreting it correctly.

I later learned that it was due to cancer that he developed less than a year ago. I had no idea that he was ill—every interaction I’d had with my host family had been completely normal. I felt immense guilt for not checking in on my grandparents and assuming that everything was fine, and I grappled with the fact that I wasn’t able to even speak to him over video call before he passed. I’m sure my host family didn’t inform me for a myriad of reasons, but I so desperately wished I’d been aware.

the funeral proceedings happened so fast. my host sister FaceTimed me into the ceremony and showed me his body, which was jarring on a level I’d never previously experienced. she sent me videos from his funeral collage, which included several pictures of me with him. I cried a lot.

I spent the first few days of the semester researching Japanese funeral practices and asking my Japanese friends how I could best support my family from afar. I decided on sending them incense and a condolence bouquet that they offered to his altar. it was a small gesture, but I felt better when I saw the pictures of the flowers next to the photo of my grandfather.

it was a rough start to the semester. since my psets are due biweekly, my workload in the first week wasn’t bad, and cramming my day with problems helped take my mind off of what happened.

the unfortunate events didn’t end, though. the week of spring break, I found out that Flora, my cat, was sick.  we thought it was a UTI, but it turned out to be something much more insidious since her condition worsened rapidly. on April 3rd, my mom came to visit me at MIT and informed me that she and my dad had decided to put Flora down. I was distraught.

I’m allergic to cats, so out of my family, I spent the least time with Flora. even still, the news caused me immense grief, and witnessing my mom in such a inconsolable state was gut-wrenching. I immediately sought comfort from one of my close friends, who had dealt with the same situation a few weeks prior. he and several other friends in my living community and clubs helped talk me through my grief and offer me advice on how to best approach this.

with my friends’ advice, I spoke with S^3 for the first time in several months. I visited their virtual office hours and started crying instantly, so convincing the dean that I needed extensions on my work wasn’t difficult in the slightest. my experience with the dean was great; he comforted me and related with me while pointing me to resources and explaining how to receive help from professors. one of my classes doesn’t offer extensions—even when I was sick earlier in the semester and asked for a few-day extension, I had simply been directed to their late policy. with S^3’s help, I got a few extra days for a ‘family emergency.’

we got Flora in 2011, when she was about two years old. she was shy and afraid of us, so I—in typical dumb 10-year old fashion—would drag her out from her spot behind the toilet and try to force her to play with me. over time, she was desensitized to my ruthless attempts to make her socialize, and she began leaving her room of her own volition. in no time, she was a precious member of the family.

returning home and seeing Flora in her new, defeated state was heartbreaking. she wouldn’t play with me no matter hard I tried—she was in a lot of pain, so we were giving her sedatives. she seemed like she had a permanent grimace on her face and her fur was scruffy and unkempt for the first time. she just wasn’t how I remembered. I had seen her mere weeks ago, but her condition had changed so fast. I hated myself for not playing with her more when I had the chance. it was absolutely brutal to see her trudging around the house instead of running around like she used to. sometimes, she couldn’t even walk; every time she had a bout of pain, my mom would carry her around the house like a baby, and she’d rest her head on my mom’s shoulder, rendered immobile.

putting a pet down is a decision that’s awful beyond comprehension. I wasn’t directly involved in making it, so I was spared the feelings of guilt it induced, but god. every time I looked at Flora, I felt ill. reading about the procedure made me so nauseated I couldn’t breathe. on some days, Flora seemed normal, which made the thought of what was to come even harder, but reminding myself how much pain she was in helped assuage me that this was the right decision.

Nisha started making a photo album and my mom ordered a small wooden box to put her ashes in. the concept made me sick to my stomach, but I agreed to paint it and attach a picture of all of us with her to the top. I painted flowers in honor of her name and added some pawprints leading to the lock that opened the box. making my beloved pet’s urn before she even passed was brutal beyond belief. 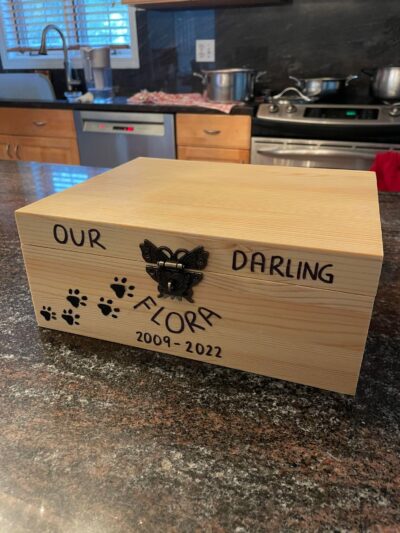 painting those pawprints fucked me up 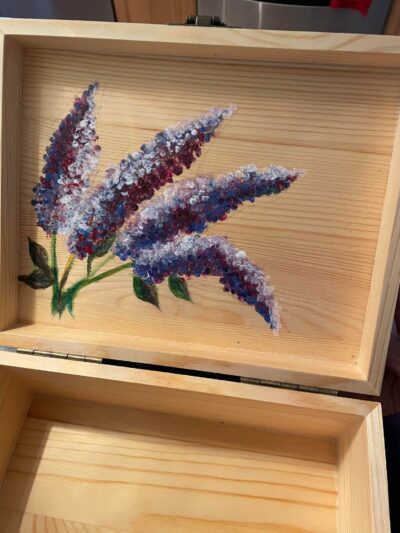 lilacs since they reminded me of her, and because they grow in my backyard

I didn’t cope well. I cried every couple of hours, or however often I looked at my mom’s face. making a sad playlist was about all I could do to process what was happening.

on Thursday afternoon, I returned to MIT for CPW. I’m CPW chair and was hosting a few events, so I couldn’t afford to miss anything. leaving my home in its somber state to go be energetic in front of hundreds of prefrosh wasn’t optimal, but there was nothing else I could do. I put my all into the three days, compartmentalizing my emotions so I could be present for the prefrosh and all the friends helping me run events. early Sunday morning, I took a bus back to New Hampshire to be with everyone for Flora’s last day.

the procedure was on Monday. it was a beautiful, cloudless day, which felt like a sick joke. I spent the morning sitting with Flora, but looking at her face and knowing what would happen in a few hours was nauseating. seeing my mom’s desperate attempts to get her to eat didn’t help either.

we put her favorite toys in the box and took her to the vet. as soon as I stepped in the room where she would be put down, I felt an overwhelming hopelessness; the horrific nature of my reality started to seep into my consciousness. we spent half an hour with Flora, taking turns holding her and stroking her head, combing her with her favorite brush and whispering to her gently. I wiped my mom’s eyes and nose for her since her hands were busy holding Flora.

the procedure itself was so swift that I could barely wrap my head around what had happened. the medicine was administered so quickly that it was done before I could even register the last image of her in my brain. we laid her on her side, and if it weren’t for her tongue sticking out of her mouth, she would look like she was asleep.

I’ve never witnessed my parents and sister grieving so much. it was one of the hardest things I’ve ever experienced. it was worse knowing that they were feeling more pain than me since they had spent much more time with her. she was initially my sister’s cat, but she was the constant companion of my parents, and such a valuable part of their lives after my sister and I left for college.

Flora was such a loved cat. without a doubt, she got as much love as we could’ve given her. I feel so lucky to have had her in my life, and I know how much joy she brought every member of my family. losing a pet is never easy, but I’m fortunate to have been able to be with my family as it happened.

it’s been a rocky couple of weeks, but returning to MIT and spending time with my friends has helped. there have been a lot of fun events, including my birthday, that have taken my mind off what’s happened. I’m very grateful. 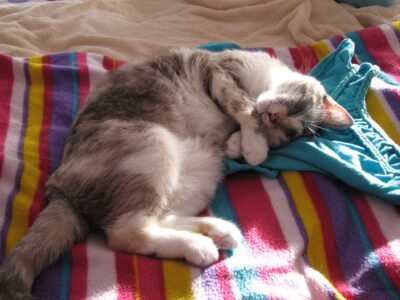