dress your wounds and stay in bed by Amber V. '24

cw: I discuss some injuries with varying amounts of needles and blood

I learned some valuable life skills in Denmark, from how to turn on an induction stove to how to balance on a bicycle in unfavorable conditions, such as after a grocery shopping trip, a concert, or a Friday. One of the other skills I practiced was self-care.

I learned to let myself rest when I was sick, let myself heal when I was injured, and to sleep after I ran myself and select members of the engineering department into the ground. I was going to write a blog about this, but then I took seven classes, got sick for a month, and pulled too many all-nighters to string together enough coherent sentences for much blogging.

Now it’s December, and I’m writing this at a healthy 11pm in my favorite late-night coffee shop. I’ve clearly learned these skills in a lasting and deep manner.⁠01 now it’s January, and I’m finishing up this blog in the best Mexican restaurant in my area of Sao Paulo

In Denmark, my work was clear that when you’re sick, you stay home. It was summer, a slow period in countries where people get sizable vacations and take them. My absence wouldn’t hurt production.

So, when in June I woke up feeling not my best, I drank hot coffee and biked to work. I shouldn’t have, but I wasn’t coughing or sneezing, so I told myself it was fine. Luckily, no one else got sick. However, ignoring illness and still exerting myself did not make anything better, and the next day I woke up with an intense fever.

I crawled to my laptop, mentioned in the Teams chat that I was sick, and passed out on my futon.

Growing up, I was used to dealing with injuries and illnesses the way you deal with bullies: ignore them, and perhaps they’ll go away.

Maybe this comes from being called ‘tough’ as a kid. I didn’t often cry when I fell.

Maybe it comes from having busy parents and a lot of siblings. They taught us to bandage our cuts but

My family doesn’t go to doctors too often. When I was seven, I broke my arm at school, and we didn’t go to the emergency room until nightfall. When I was twelve, I had an infection that swelled for two days before we got it treated. I remember taking intravenous antibiotics. I may have been old enough that the doctors stopped calling me brave. 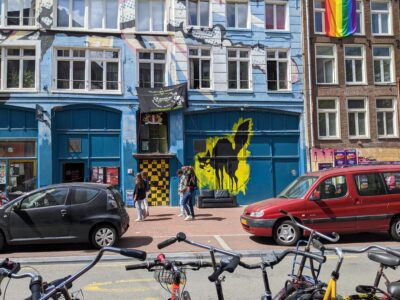 In Denmark, I spent my sick day alternately sleeping and reading Neil Gaiman, with a brief excursion into the outside world to breathe fresh air. I took another day off that week, too, and felt good by the weekend.

This was fortunate, since I was visiting MG in Berlin that weekend.

I wonder if I would have taken time off if I weren’t about to board a plane and see my friend. The time crunch told me I couldn’t do anything that would prolong a cold. Sleeping a lot and drinking hot tea was the responsible course of action.

Of course, recovering before you re-enter society is always the responsible route, but I struggle to grasp that too much of the time.

It’s funny. I have carpal tunnel, and compartmentalize pain every waking hour. Maybe that’s part of why flesh wounds don’t affect me. I know that they’ll heal. When pain is temporary, it is only physical. 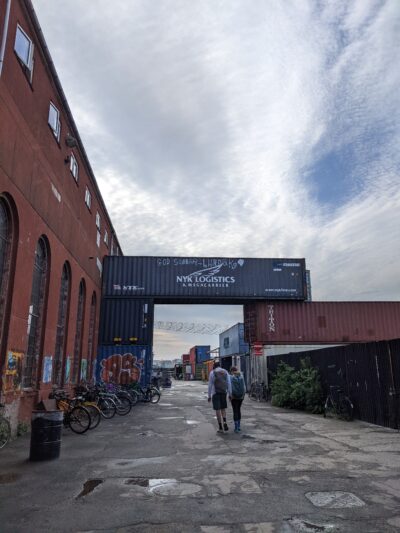 entrance to outdoor market in Denmark

Most days in Denmark I was up for anything. Swimming after work in the icy northern ocean? Yeah, let’s go. Go clubbing with co-workers in shifty bars where old men hand me free drinks? Of course.⁠02 one of the interns seemed shocked that I kept getting harassed Metal festival? Metal festival. It was easy to keep up when my co-workers were adults with work-life balance.

The only time I slowed down was after I got a new tattoo. I read some articles on tattoo care, and the tl;dr was not to get too much sunlight or seawater on one. Normally I’d take that liberally, but for once I was conservative. The tattoo in question was a goat skull with desert flowers on my calf. I cut up a sock to cover it from the sun when I went running, every day for a week.

I skipped ‘swim in the ocean day’ the day the tattoo got done, and afterwards I went home early from a party, too. The FOMO was real — everyone went to a salsa club which I never wound up visiting — but my tattoo is, to this day, not stretched from healing over a tense muscle. 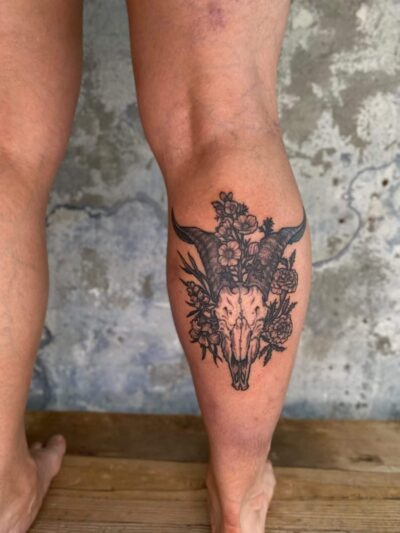 Feeling myself take care of the tattoo was interesting. I knew tattoos are permanent, so whatever decisions I made for a week or so in Copenhagen would have long repercussions. I wasn’t doing much, just applying lotion twice a day and covering it from sun, but the internal commitment to care was new to me.

Cut to this semester. I protect my hands but I wring the rest of my body through the grinder on the regular. Let’s skip the late nights — I didn’t manage to rest enough when I got sick, and I felt weak for much of October. Then I got this cool burn!

[BE WARNED it is a little gory! Here there be dragons] 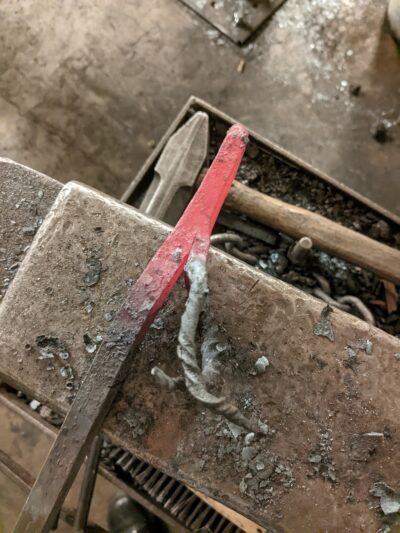 this dragon. he is guilty.

I was forge welding a dragon head. When forge welding, you heat up iron more than you usually would: not the 1000-1500 degrees C of red-hot metal, but ~2400 degrees of white-hot. I pulled it out sparkling aggressively. I’d left it in for a bit too long — the sparks should be more mild — but I thought nothing of this and hit the sparking, white-hot metal with the hammer.

When metal is heated, it releases slag. Usually the slag is small and flaky and stays on the anvil. With this piece, however, a dime-sized piece of slag flew from the metal and into my boot, where it burned through the sock and sizzled on my skin.

I gasped, set down the hammer, and used the hot metal to brace myself on the anvil as I took off my boot and sock.

Yep, I thought, that sure did burn through the skin. It wasn’t bleeding, so I stuffed my foot back in my boot and turned back to the workpiece, which had gone from white hot to yellowish-orange, still hot enough to work. I picked up the hammer and smashed it several times before I added flux and stuck it back in the fire.

Then I took the workpiece out again, hammered it down, added flux, and stuck it back in. Twice more, to make sure the forge weld was solid.

Then I set the dragon on my anvil and limped over to the first aid kit. I wanted a band-aid. There weren’t any band-aids, so I closed this big case of burn cream and limped back to my workstation.

I picked up the dragon head. The snout was too narrow to split into an open mouth, so I took it over to another smith to ask for advice. I hoped he hadn’t seen my taking-off-my-boot shenanigans. I thought it was kind of silly. 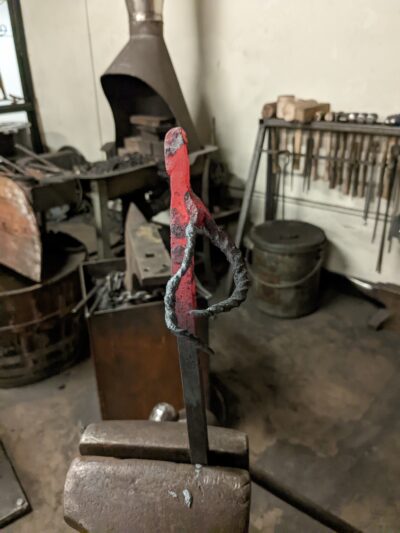 look at him. how smug. his horns were thick and powerful but now after losing mass due to oxidation they are thin and scraggly.

I found a band-aid in my room later that day and felt incredibly responsible. My burn was about the size of a dime. It was white, which I assumed was the layer of fat that lies between skin and muscle. That would make this a second degree burn.

It was two weeks from my last final, which meant I had a lot of essays due, and then a lot of finals to study for, all in quick succession. I considered going to MIT Medical, but the last time I did that I was there for three hours. Besides, I knew how to deal with injuries. You put neosporin and band-aids on, and then ignore them and hope they go away. 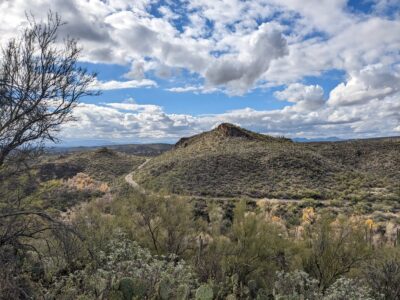 This burn, however, did not go away. It stayed there, an open wound.

I changed the bandage religiously after each shower, hoping that the next time I removed it, it would be smaller. No such luck. It stayed, white and liquid.

Sometimes I exposed it to the open air, and it closed over, but only while it was in the open. Slap on a band-aid, and whatever scab had begun to form vanished, leaving the wound gaping.

I didn’t see a doctor until break. They told me that I’d been caring for it the wrong way: the white stuff I thought was fat was in fact dead cells that prevented the wound from properly healing. When the doctor scraped the dead cells away, I saw muscle the color of uncooked steak and realized I in fact had a third degree burn.

That is one degree more exciting! A cool story to tell. A big gory scar, if the thing ever heals.

But it has to heal first. Since that doctor’s visit I’ve been intentional with care. I still run, but I’ve been checking on the burn’s healing progress instead of ignoring it. 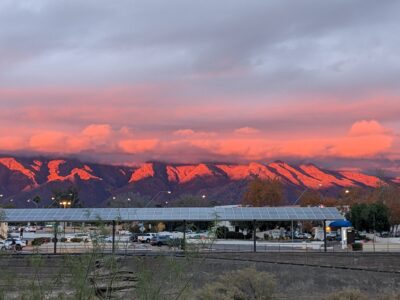 Running myself into the ground goes with the territory; it’s what got me to where I am, and it’s what allows me to produce art despite the rush of work and school. I wouldn’t trade that work ethic. Nonetheless, I think this was a wake-up call to me to drop some responsibilities and be more in tune with my body.

Looking down the tunnel of three more semesters of MIT that are as full and sleepless as the three in-person ones I’ve had fills me with exhaustion. I never expected this to happen, but I want to try to carve out balance in the semesters as well as summers and IAP. I want to sleep more, set aside time to run and lift, and let myself be well.

I think when this third-degree burn heals, I will put a tattoo around it. I’m not sure what it will be. And when I do, I’ll protect that tattoo from the sun.

Update: once I started taking care of it, the burn healed in about three weeks. The scar is disappointingly not that gory any more.