Sixteen months ago, in April, I made a promise to myself: if you choose MIT, you get to take a gap year. You’ve been selling your soul to science for too long. I was walking along a riverbed and I was torn. I spent most of high school letting academics, particularly science, overwhelm me and eat up all my writing time. I didn’t want to go to MIT, because I thought that it would be more of the same; but I couldn’t not go, for it would teach me more science than I’d get anywhere else.

So I went and took that gap year, and it was pretty cool. I’ll blog about that, too, someday. I set out feeling that a year was not enough, but my mindset changed after months of milking goats and carefully calculating whether it was cheaper to buy groceries or just eat three-euro pizza⁠01 Pizza, you idiot, you were in Naples . I was ready once again to learn — not only math and why the hell the Heisenberg uncertainty principle makes any sense, but also how ancient nations rise, and how to write a love interest that readers root for.

Specifically I wanted to take a writing class and a Greek history class. But at CPW, whenever I told anyone — even HASS⁠02 HASS = Humanities, Arts, and Social Sciences instructors — that I wanted to take two HASS classes, they laughed at me. So I knew that I would really have to fight with my advisor to get this to go through.

I was ready. This is what I’ve been trained to do. Every time I wanted to take a hard science class in high school, someone would sit me down and say things like “Amber, you do not know calculus. You should not take physics C.” And I would nod and say that I agreed, and then I would book another appointment with a different counselor, until someone put me in physics C. And then I tried to cancel out the d’s in dy/dx as one would do with fractions.

I crafted a very clever plan, sort of like the plan you make when you are eight. You say, “Mom, can I buy that entire cake and eat it?” Of course she will say no, but she will feel a little bad about saying no, so when you ask to get a cookie she is more likely to say yes.

My math score⁠03 from the math diagnostic test which all freshmen take was good enough for MIT to grant me credit for AP Physics C, but simultaneously was not good enough for me to take 8.012, the advanced version of common core physics. My plan was to ask to take it anyway, since my advisor would definitely say no. I would argue a little, then give up and say, “Ok, but can I at least take this writing class?”

Except apparently my advisor is super chill, so he pretty much said “Cool, go ahead.”

He let me take the Greek and creative writing classes, too. Somehow I got in to both, even though they’re capped at 15 students⁠04 the number of times I have almost deleted this, or considered re-phrasing so that the world doesn’t know I am taking two HASSes, where anywhere else, taking hard chemistry and hard physics and Greek history and writing would be considered smart and not shameful -- don’t let it get to you, kid. .

So envision yourself walking home, now, carrying the chocolate cake that you are miraculously allowed to eat. All of it. Tonight.

That’s roughly how I felt after the first physics lecture, and the second, and the third. I love physics, when the derivations are slow and detailed enough to follow. But these are not, or else I am out of practice. This class is hard. 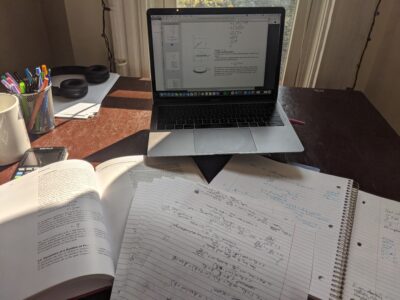 my laptop looks like it’s floating, but really it’s sitting on top of a book

It kind of feels like a replay of Physics C my junior year, where I was not quite prepared, and the thrill of learning anyway made me feel alive. That class made me feel stupid and brilliant at various times (usually the former). It stressed the hell out of me. I remain convinced that that class got me in to MIT⁠05 this is probably not true. Admissions looks at a lot of different factors. You don’t need to have done this to get in, and doing this won’t necessarily get you in. I did not have any STEM internships when I applied, so I feel that this class helped me. . So I wonder if, subconsciously, I put myself here again on purpose. My brain does not know that it is possible to learn without suffering.

Also, I am not used to being in an environment where the lowest level of a class will still challenge you and teach you. I know, logically, that MIT Physics is very different from an AP class in Arizona. But psychologically, I am scared of missing out.

I think that this is the case for many frosh, in many different colleges. It’s a sort of Pavlovian cycle: taking the harder route worked once, so I’ll do it again, and I am determined to make it work⁠06 what do I even mean by work? My friend I could not tell you. . Then when I’m done, I’ll think it worked because of that class, when really I might have been fine either way. And do we keep on doing this, sacrificing more time and happiness in exchange for hard classes and good GPAs, so as to get internships, or get in to grad school? How much will you give to your job, and how much will you want to?

I wonder if I’ve failed myself, because I said that I would spend time on my writing and not waste it here. But maybe this, challenging myself to learn, is also part of who I am.

Maybe part of who I am — or who I try to be — is being where I am not wanted. They are giving two exams before add date⁠07 the deadline for adding a class. If we wanted to switch in to 8.01, we'd have to add it to our schedule before this date. , for the purpose of letting us “decide if this class is a good fit.” Hearing that, I thought, “You will not weed me out, sir.”

Maybe I’m having my last laugh, trying to be good at a difficult class, when I know I will not be academically remarkable in the thrall of MIT. Unlike some, I will not devote all my time to an impressive, demanding major. There are too many other things I care about⁠08 I realize that this blog is just me wrestling with my ego. .

Or maybe I just want to learn physics. I like to think that, anyway.

The authors of this textbook make sassy comments in the middle of dense paragraphs. I understand calculus now, which means I can see the patterns to equations that three years ago I was only copying down. My professor explained a bit of his research last week, regarding the strong force in eight different dimensions, and I wanted to understand more.

If we’re going back to you (or me) sitting at the kitchen table, with that chocolate cake, I’ll say it’s almost 10 pm. The night is young. I’ve eaten maybe half a piece. So far I think I like it.