A semester of all things Swiss German and chocolate to come

It all happened very quickly. I first heard about the program during the summer from an email sent out to Course 6 Class of 2019. My friend had also sent it out to a group chat, and we all drooled at the thought of spending Spring 2018 abroad, especially because Switzerland and chocolate. My friends and I had considered taking part in the Cambridge-MIT Exchange for the entirety of Junior year, but the program was canceled just last year. I had been on the lookout for other options, and ETH seemed to be the perfect fit. An exchange through Course 2 had been in place for the past few years, but this would be the first time through Course 6. 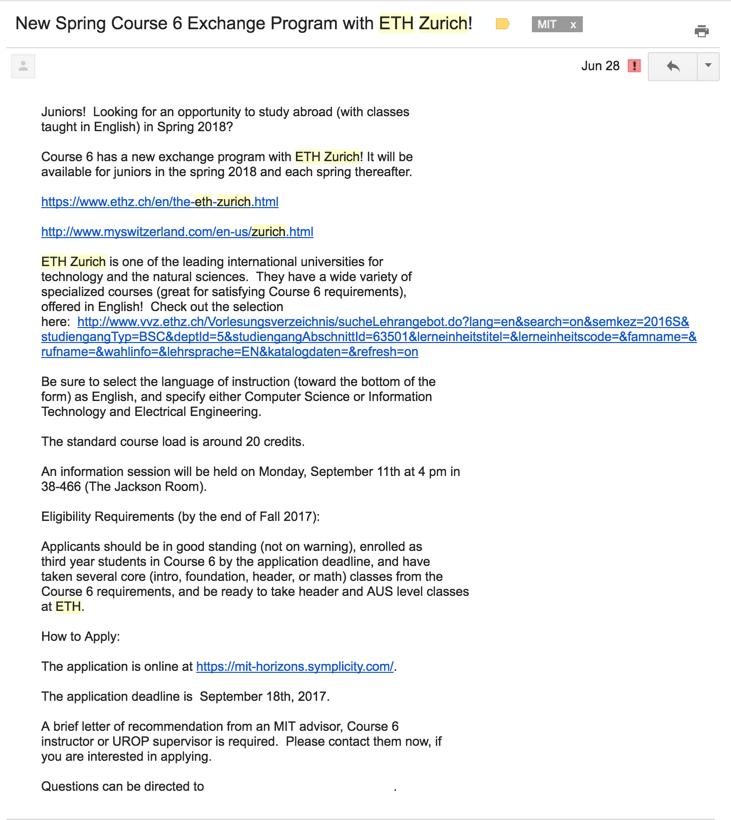 How it all began

There was an info session mid-September, and the application was due within the week. I promptly asked my summer UROP supervisor for a letter of recommendation, and also sent an email to my advisor. In the following week, I had an interview with the Assistant Dean of Global Education at MIT and Anne Hunter, the Course 6 Undergraduate Administrator. The following day, I got an email with an offer for a spot in the exchange.

I had less than a week to decide. Indeed, I was incredibly excited and confided with my family and friends. But getting excited about the idea of it was much different from actually committing to it. I spent the next few days really thinking through the offer. The dean arranged a meet and greet with two exchange students from ETH currently spending the semester at MIT, as well as two MIT students who did the exchange last spring. The Head of the Student Exchange office at ETH was also present to answer all of our questions.

But spending a semester abroad would mean one fewer at MIT, one fewer with my friends here. I would be one semester removed from all my extracurriculars, one semester removed from my carefully planned out courseroad. I would have to find a new training environment and coaches if I wanted to continue my skating career. I would have to make new friends, find a new community and living group, and adjust to an entirely different culture, environment, and language. It would, all in all, be easier and the path of least resistance to stay at MIT, take the classes I already have planned, knock off my course requirements and take the lingering Bio GIR I have been putting off, continue my work in my clubs and extracurriculars, and avoid having to uproot my entire life and routine, friendships and communities, all the things that I’ve worked so hard to cultivate the last 2.5 years here at the MIT. Inertia is real. Though a few Course 2 students had previously done the exchange, no one from Course 6 had. We would be the guinea pigs.

Yet, this would be a once-in-a-lifetime opportunity. My UROP supervisor likened ETH as the “MIT of Europe.” Albert Einstein studied there! I would be able to meet and work alongside an entire new group of students and professors, and have a chance to study and immerse myself in a new environment, one that is just as engaging and intellectually stimulating as MIT. I will finally have an excuse to learn German, and travel all around Switzerland and Europe as well while I’m at it. 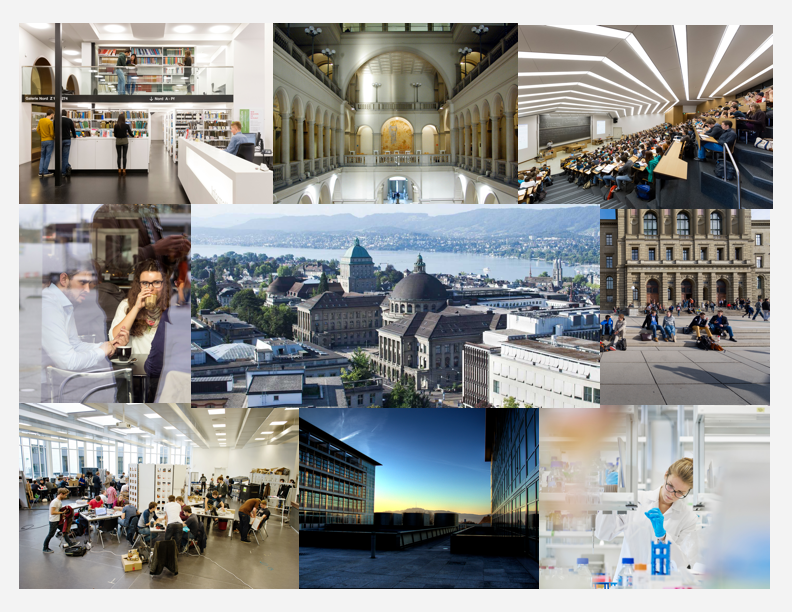 Within the next few days, I’ve received a slew of emails and forms and documents from ETH. Then, it was the challenge of putting together a study plan and pre-registering for classes.

There isn’t an official schedule released for next semester, and there aren’t any previous Course 6 exchanges to rely on for help and advice. Though we do have a group chat for all of us studying abroad next semester, we’re all just as lost as the next, but doing our best to be as resourceful as possible. There is a process of getting our credits to transfer over, but it’ll be work on our end to petition for those credits once we’re back at MIT in the fall. Luckily, we do have the assistance and guidance of two professors at MIT, Professor Chris Terman (who taught 6.004 when I took it last semester) and Professor Stefanie Jegelka who did her PhD at ETH throughout the process.

Credits work a bit differently at ETH, and most students typically take more classes but of fewer units than at MIT. Generally, it should work out to be about the equivalent amount of work and class time as the average MIT workload. However, at ETH there is more of an emphasis on the final examination, and less of an emphasis on psets and assignments — which can be good or bad depending on how you look at it. More free time during the semester, vs. more chances to boost your grade and less pressure on the final. Also, there are oral exams at ETH (me: ?!?!?). 2/3 of our coursework has to come from the department we are in, so similar to MIT, there is an focus on exploring other departments and the humanities at ETH. Luckily, most of their advanced undergraduate (their undergrad is 3 years) and Masters classes are taught in English.

I planned for: (1) Ubiquitous Computing, a class on wireless sensors and components like RFID and bluetooth; (2) Learning and Intelligent Systems, which is a mix between 6.036 and 6.867; (3) Case Studies from Practice, which offers real-world technology cases and projects from partner companies; (4) 3D Vision, a version of computer vision; (4) User Interface Engineering, a Masters class that combines 6.815 and 6.036; (5) Human-Computer Interaction, a seminar on HCI topics; (6) Cognition in Architecture – Designing Orientation and Navigation for Building Users, a seminar at the intersection of Course 9 and Course 4; and finally, (7) German, the most beginner version.

Yes, it’s a mouthful, and I am currently planned for much beyond the typical credit load. We’re recommended to take between 20-25 ETH credits, and my study plan totals 31. I’m also planning to take a 2 week German intensive language course before the semester starts. There were even more classes I wanted to take: one in entrepreneurship, another in information security, and one in computer graphics and vision. Even then, I will drop one or two of the classes I have on my study plan once I get a feel for them. I’m hoping to get most of the classes and credits to transfer over, particularly to count for Course 6 AUS or EECS electives. We were also told we could get humanities to transfer over as HASS-E credit. Regardless, I’m really looking forward to these classes.

Until then, I do have more forms to fill out and several more weeks to figure out the rest of the logistics. 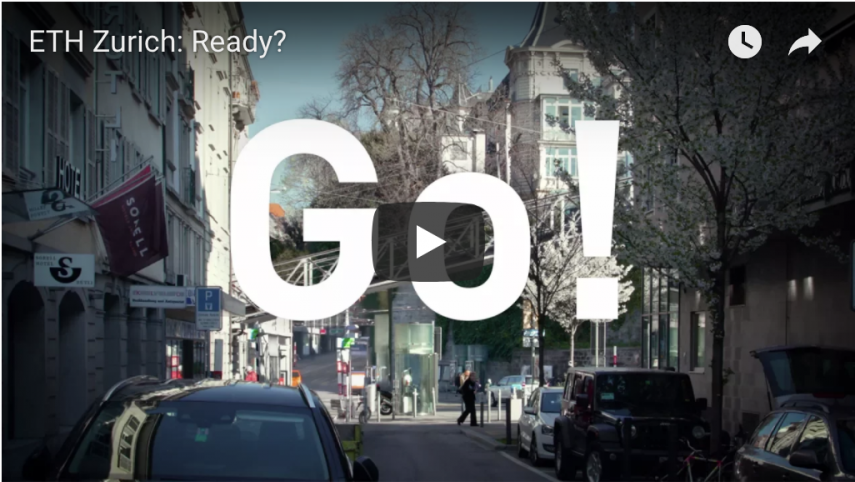