every class i went to during the first week of fall by Rona W. '23

all *checks notes* twelve of them

I went to a lot of classes in the first week of the fall semester. According to my iCal, I have spent nineteen hours in class in the last three days. Why? Because I want to experience everything. 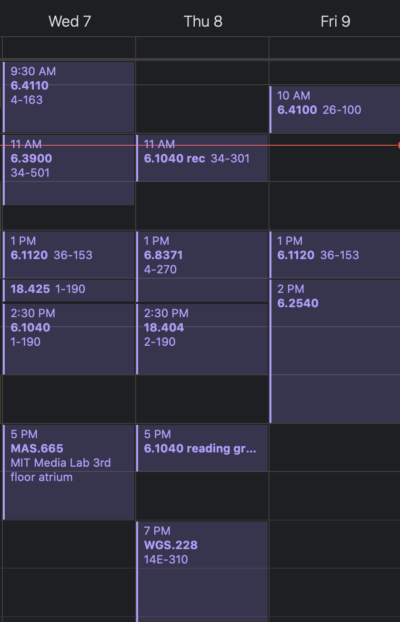 look at all those purple blocks

Here’s every class I went to:

This class is a replacement for Artificial Intelligence, so it would fulfill a requirement I need. The lecture was really good but also noisy construction was happening in the background so I was slightly losing my mind. It was very mathematical, which I liked, but it also seems more difficult than Artificial Intelligence, and if there’s a class I’m investing a lot of effort into this semester, I’m not sure I want it to be this one.

I took part of this class last year before dropping it. It is pretty much the same as what I remember. I don’t know if this class will ever be that exciting to me—honestly, I feel like I’m just not that interested in this side of computer science—but it’s manageable. It fulfills the same requirement as 6.4110.

I really, really like this class. We get to build our own virtual machine and learn about all the nitty-gritty details of how a language environment works. I just think it’s so fascinating. This course is supposed to be a lot of time and effort, but I think it’s worth it.

#4: 18.425, Cryptography and Cryptanalysis. Wednesday, 2 PM. Only caught the last thirty minutes of lecture.

Showed up late because I was in 6.1120, not sure how much I truly got out of the last thirty minutes. I didn’t really intend on taking this class. It’s an interesting topic, but the class is supposedly a lot of work, and I’m more interested in other parts of computer science.

This was in the same lecture hall as 18.425, which is partially why I went to 18.425. I really like this class too. It aligns well with a lot of web development skills I already have, and front-end development has a really fast feedback loop. Plus, my friends Deniz, An Bo, and Grace are in it, so I don’t have to worry about finding a group for projects. Again, this class is supposed to be a lot of time and effort, but it’s worth it.

I saw that this class was having a meet-and-greet before the first day of lecture on Thursday, so I went to the Media Lab to see what was up. The current start-up I work at is in the Web3 space, so I thought this class might be a good opportunity. To be honest, it didn’t seem well-aligned with what we were doing, and everybody else I met was a graduate student, so I decided to get some food and leave.

My friend Athena was taking this class, so I wanted to tag along and see if I liked it, even though from the summary in the course catalog, I didn’t think I was that interested in the topics. Spoiler alert: I wasn’t that interested in the topics. I’m not really into photography, so learning about the technology behind it doesn’t engage me. The class seemed chill and if there were no other classes I wanted to take, it would definitely be doable. But given that there are other computer science classes I liked better, I didn’t think this was right for me.

My friend Deniz was trying to get me to take this class but it’s so much work and I don’t even have all the prerequisites. Anyway, apparently the lecture halls for this class and 18.404, the class I was trying to go to, got switched last minute. So I walked in and saw Deniz sitting in the front row and got very confused, because I was pretty sure he wasn’t taking 18.404. Then he tried to get me to stay but I left before someone made me optimize some C++ or something. On the way out, I ran into my friend Maritza, who also was supposed to be going to 18.404 but was headed to 6.1060 instead.

I took half of this class last year before dropping it. It is pretty much the same as what I remember. The professor, Sipser, is excellent, and the course material is fun but so fast. I’m intending on taking this class. Next time I’m going to try to get there early to avoid sitting in the nosebleed section.

I didn’t pre-register for this class but my friends Athena and Alexis were taking it, so I decided to go, since I’ve always wanted to take a class in the Women and Gender Studies department. But since I didn’t pre-register and the class was already overenrolled, I got kicked out within the first fifteen minutes, so I just went to Hayden and wrote admissions blog posts for an hour or two. I heard that the class had a dog, though. I’m sad I missed it.

THERE WAS ALSO A DOG IN THIS CLASS! Anyway, I decided to go to this lecture because it also fulfills a requirement. I’d heard that there is a lot of overlap with the machine learning class, though. The lecture was pretty slow, but to be fair, this was only the second one (I’d missed the first one for the other AI class, the mathematical one).

I decided to go to this class after reading Vincent H. ’23’s blog post where he mentions that it is “like magic.” Class took place in the MIT Nano building and we got n&n’s, which I found hilarious. Then we got to take a tour of the Nano building and wear bunny suits. But I lost interest; I guess I just don’t really like lab classes. So halfway through, I asked to leave. This was slightly embarrassing because most of the time, if I want to leave a class, I can just get up, but this time, I had to be walked out of the lab and instructed how to de-gown (a.k.a. remove my bunny suit). 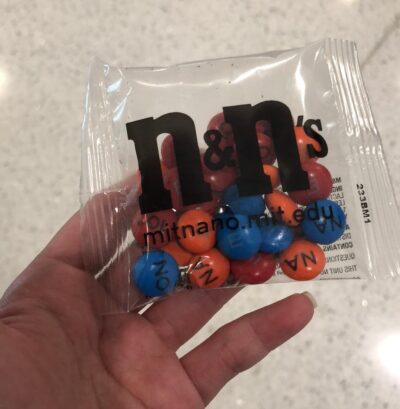