Fact: Architecture majors have to code by Jenny X. '13

I don't remember signing up for this

Well…if there’s one thing you can know for sure about studying at MIT, it’s that time flies by – whether it’s funtymz or seriousbusinesstime. Long hours spent working might seem like eternity, but we somehow always get past it and immediately get behind another battle before we even realize…

Spring semester so far, the new battle for architect majors in my year is … CODING.
Yeahhh – What the…

I’ll be first to say that when I planned to major in Architecture @ MIT, I thought I’d be drawing pretty pictures. From my past entries, that’s clearly incorrect, but I’ve also had an exciting, adrenaline-rushing – albeit tiringgg – time learning all about model-making, 3D modeling, 3D printing, etc.

But now for 4.113 – Applied Architecture Design Studio I, we have to code…with programming languages. A few of us have some programming background, but for the rest of us (me!) it’s like … I don’t know, catching up with the rest of MIT. (Just kidding, architecture pride.)

But seriously though, for our first project in 4.113, each one of us had to thoroughly research a natural example of self-assembly or self-organization. I picked oscillating chemical reactions (reactions that oscillate in time and space), so I had to pore over chemistry textbooks and scientific journals for information on the mechanism of these reactions. The idea is to extract how self-organizing mechanisms occur in nature and adapt them into ways architectural elements can populate and self-organize in any given space. So basically, I’m trying to write code that aggregates geometric elements in a defined space as if chemical reactions are adding a certain ion in a petri dish…and pray that what I create look as interesting as this: 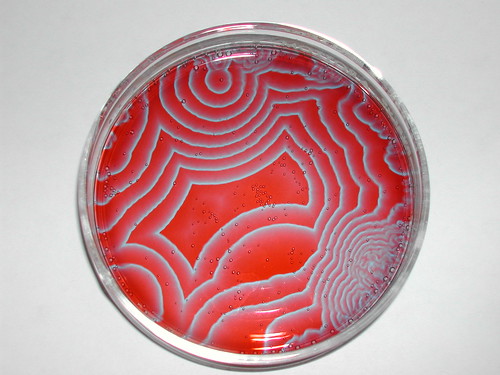 It would be a pain to manually draw recurring shapes over and over on a 3D modeling program, so that’s where the coding comes in. We’re using Python for the Rhino modeling program. While I’m totally intimidated by coding, I’m also genuinely excited for what I come up with…because chances are, it will help me. (Last semester I spent 6 hours drawing line segments, and 6 more raising them to different inclines).

How would you feel if MIT had a programming requirement for graduation – like the swim requirement? Just saying…so many majors need it here anyway…And as far as I can tell, it’s quite useful :P This is what I’ve been playing with in Python for Rhino: 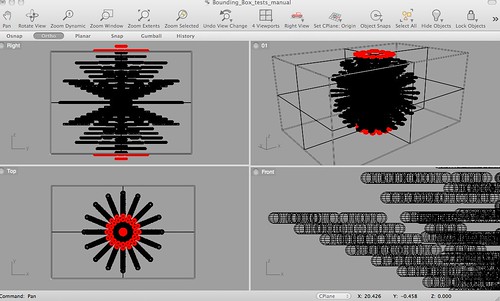 Not sure how I’m going to make it more oscillatingchemicalreaction, but that thing would have taken eons without programming.

Anyways, the second class I’m taking is 4.302 – Introduction to Visual Arts for Majors…Let’s just say this class makes me put on my artsyfartsy hat and speak all I feel about emotions, identities, parts and whole, bodies, the familiar vs. unfamiliar – also known as, the abstract thoughts that run through my head abberantly, and often unnoticed. So I thank this class for teasing out some of the artist juice I’d like to think I have inside me. Our first project is about body-extension, which means building something that when engaged with the body creates a meaningful SENSORIAL experience. I also thank this class for ‘sensorial’ – my new favorite word.

The third course in the architecture repertoire is 4.605 – Introduction to the History and Theory of Architecture….This is like a history class but with much more visuals. While we look at slides of ancient villages and cities, a TA is hovering around Google Earth on the side trying to show us what the present day locations look like. This class makes me want to travel everywhere – I’m really tempted to just drop everything and go live in a historical African village for a while, like this: 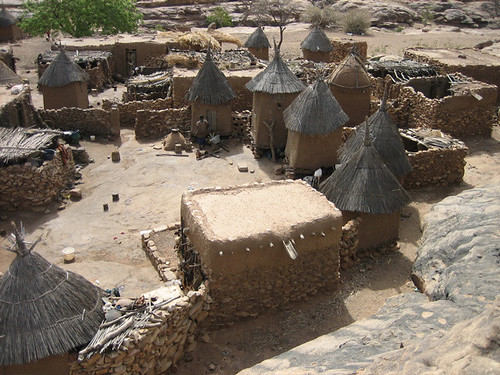 In addition to these three classes, I’m also taking 15.812 Marketing Management in my effort to complete a minor in Management. I’m really liking it so far. The lectures and case studies are immediately applicable in real life; I mean, my shopper IQ went up by like 50 points after the first lecture. Lastly, I’m taking 21F.108 Chinese II Streamlined as a part of my HASS Concentration in Chinese; Chinese I Streamlined was easy, but now the essays take me 2 hours a piece … :( But anywaysss

Thanks for reading this rambling interlude of my spring courseload!

Let me know if you have any questions about anything I mentioned;

15 responses to “Fact: Architecture majors have to code”