So they say that the best part of MIT is the people. Is this true? Well, maybe. I would say that it depends whether or not you consider cats to be people, in which case I would whole-heartedly agree that one of the best parts of MIT is the tiny furry people walking around on the floor where I live. On this day let us take a look at the dynamic personalities of the felines on Fifth West of East Campus. 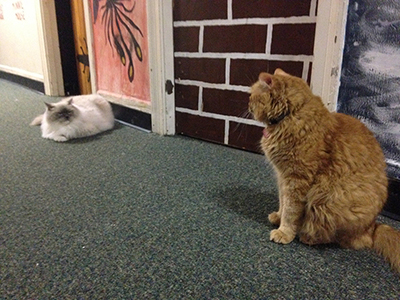 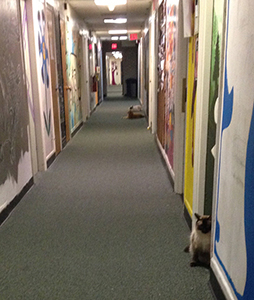 Puru is a ragdoll cat, which apparently means he has some genetic mutation that makes him extremely docile and friendly (or according to Wikipedia, “dog-like”) and is extremely inbred. Awww. His name is derived from the Japanese sound for jelly jiggling when you poke it (puru puru) and pretty much you can treat him like a sack of jelly and push him around or pick him up or throw him or do whatever and the most hostility he will ever give you is an annoyed-sounding “miaaaw.” Puru and I have a beautiful friendship and even though I am sort of mean to him and call him a dumb, weird dog, he likes to follow me around and hang out with me in my room or under my bed.

One thing I have noticed about Puru is that he is really fed up with being cooped up on 5W and seems to be dying to see the world. He’ll be following me around as I’m about to leave the hall, and when I close the stair door behind him I can hear him wailing with the most sad meows you can possibly imagine. He likes to jump up on window sills and stare outside longingly… apparently twice when he found windows that were left open he was so desperate to escape that he JUMPED OUT of them and fell FIVE STORIES to the ground. No major injuries either time, and one of the times it was my window, whoops. I guess that makes seven lives left. 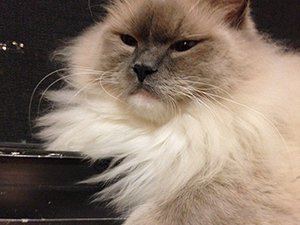 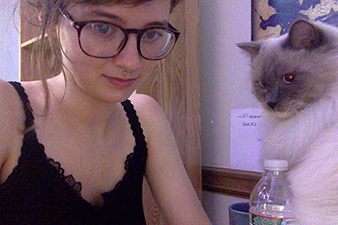 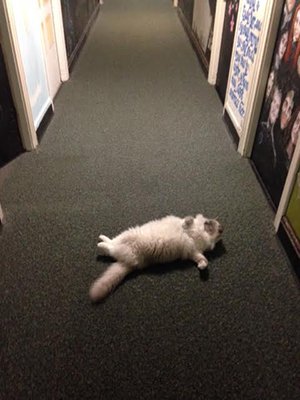 Handsome devil. Our hall had a Puru-themed party last year, though I overheard someone saying they were confused when they got there cause they did not know who Puru was and were expecting a “Peru” themed party. Lul.

Orion is a cutie who belongs to Joanna who lives next door to me. He’s sort of skittish and easily frightened so I have to approach him with caution or else he’ll run away, even though he totally knows that I’m not gunna hurt him, cause I’ve pet him a lot of times before. Yesterday I watched him and Puru have this crazy fight where Puru jumped on top of him and they rolled around for a bit and Orion retreated into the kitchen and hid under a chair. I think (hope) they were just being playful but I’m noooot entirely sure. 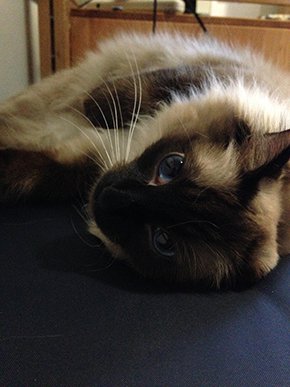 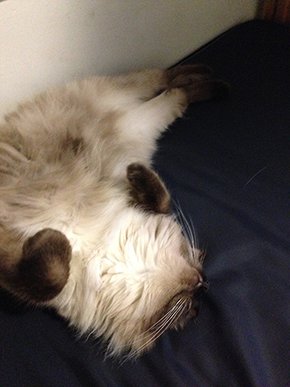 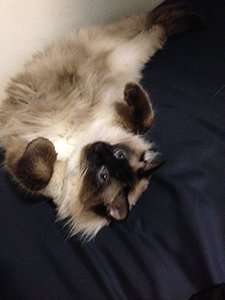 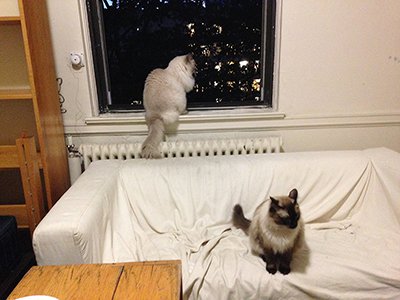 Schrodinger (Schrodie, Scrotie) is generally social and likes to follow people around and meow at them, but if you try to carry her around or generally mess with her she’ll unleash her claws upon you and it will not be a pleasant experience. Other than that, though, she is sweet and likes to rub her head against you back and forth like she’s nuzzling you. It will make you feel very loved. She also does this thing where she jumps on top of your laptop while you’re trying to work and just sits on your keyboard and stares at you, which I would probably get annoyed about if most of my human friends did that, but with Schrodie it’s okay. 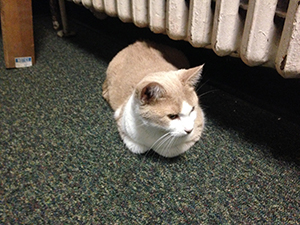 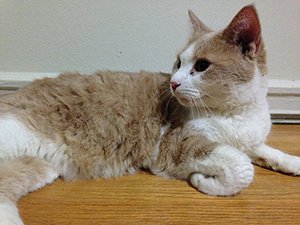 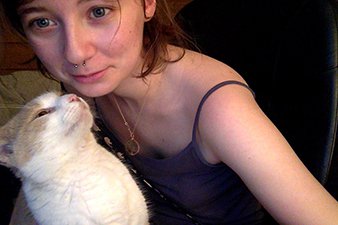 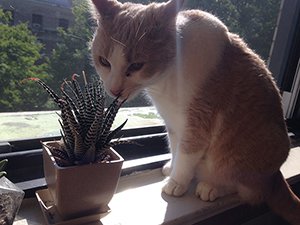 I have a complicated relationship with Caboodle. It’s like he’s hot and he’s cold, ya know, some days we’re bros and some days it’s like I mean nothing to him. I don’t take it personally, though, because he just seems like a really shy person and I completely understand his tendency to just stay in his room most of the time. Often you can find him poking his head out of the door and watching what’s going on in the hallway, but if you come near him he runs back into the room and hides. It’s honestly the cutest thing. Also sometimes I’ll come back to my room after having left the door open and I’ll close it on my way in and be in there for like fifteen minutes when all of a sudden I see Caboodle dart out towards the door from under the bed as if he’s hoping I won’t notice he was hiding there. Lol lol. Like obviously he thinks he’s being sneaky, but usually my door will be closed and he’ll just stand there like “oh frick” waiting for me to let him out. 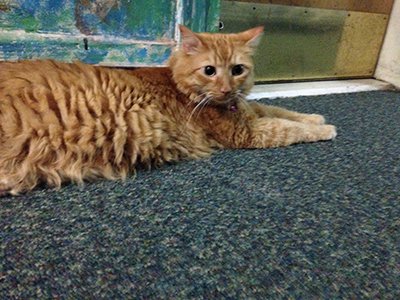 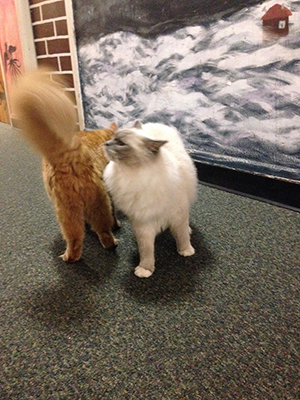 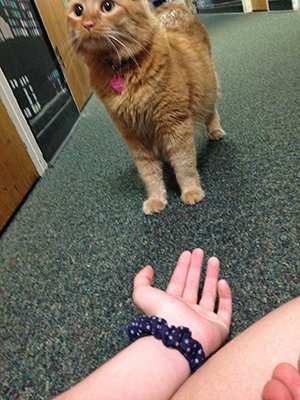 Caboodle you socially awkward animal I see myself in you.

I also wanted to mention Rupert even though he actually lives on Fourth West just because I have very strong feelings about this.. creature. See whenever I try to pet him, he seems to be enjoying it for maybe fifteen seconds and I’ll be like, aw, how cute, a nice, innocent kitty that has definitely not been animated by Satan himself.. when all of a sudden he will LUNGE and DIG HIS TEETH into my hand and not let go until I SCREAM and PRY OPEN his mouth and revoke all of my previous benefits of the doubt. (!!!) I don’t know why I still try – maybe it’s because I believe in the general goodness of other people if you give them more chances to show it, or else it’s those bright, captivating eyes beckoning me towards him so he can siphon the life force out of me and deliver it to hell, but I would like to take this opportunity warn you to NOT fall for his twisted little games. Evil, evil, evil. 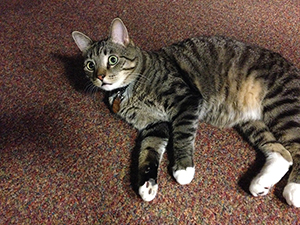 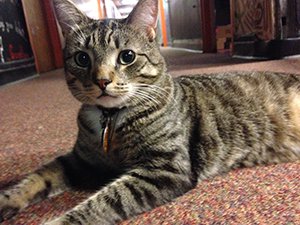 (Apparently, though, my friend Schmessica* who lived on 41W for the summer was able to build a decent relationship with him by verbally reciprocating the hostility, thus gaining his respect and tipping the power play in her favor. I would recommend this strategy only for the bravest of heart.)

*Name has been changed to avoid incrimination by PETA.

But uh, yeah. Be safe out there. 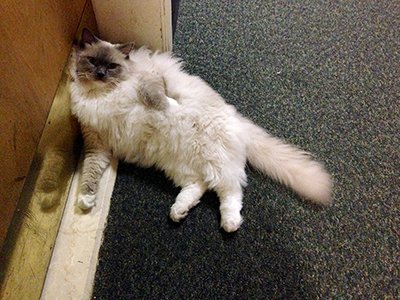