are you "jaded" yet?

The other day I was talking to someone new, and he asked me what year I was. I said junior, and he said, “ah, yeah, that’s usually when people start to become super jaded. Have you gotten to that point yet?”

It’s interesting, I’ve heard people use that word here before, like it’s a thing – becoming jaded with being at MIT after experiencing two or three years of it. It means losing your underclassman excitement, feeling tired and cynical, not bothering to remind yourself that you’re living out a rare and coveted opportunity, and generally not caring as much. I don’t know if it’s the word I would use to describe how I’ve been feeling, but I know there was a point in the past when I cared more than I do today. I don’t think that’s necessarily a bad thing, though, it’s more just an observation.

One way to describe how I have been feeling since the semester started is something like “disillusioned,” but with maybe fewer angsty connotations. I think that the things you tend to notice and find significant in life are partly reflective of your own internal state, and I keep noticing in various unrelated situations this theme of realizing that a past self had been naïvely idealistic, and coming to peace with that fact. Friends reluctantly drop one or two of their six classes; something I agreed to in the name of optimistic spontaneity turns out to be a disappointment. An artist I like retires to be a “normal person” because he’s grown out of his youthful idealism. Seniors I talk with are reconciling their freshman dreams of doing important and revolutionary things with the reality that they’re most likely about to go into the world to have a productive but unremarkable career. So it goes.

Being a junior, I know that living through MIT is not much like the ideal I imagined when I applied. The things that past-me envisioned in that fantasy weren’t exactly wrong – more just like a very tiny and particular subset of my actual experience. I had pictured all the moments of triumph over hard things and meeting some of the world’s most interesting people, and I think I even understood that I would one day pull two all-nighters in a row. I imagined what it would be like to live through stereotyped conceptions of the kinds of things an alum would find most memorable one day, and assumed that that collection of noteworthy experiences would represent what these years feel like while they’re happening. I understood that “MIT is amazing” and “MIT is hard,” that some days you feel like you’ve truly found paradise while other days you hate this place, and sometimes you feel both simultaneously.

These mantras, again, aren’t wrong. I feel amazed by my life some days, and others I could be hit by a truck and sent away to Mass General Hospital and think “oh thank god, a vacation.” I guess the point is that I never really considered the majority of my time which would feel like neither: unexciting and normal, not IHTF-place nor IHTF-paradise, just like “ah, I gotta go pset, I’ll be in Hayden for the next few hours.” I hadn’t thought about experiences like sitting in the lecture of my third-favorite class, refreshing social media to procrastinate psetting, and doing routine things that aren’t fun, but are fine. If I had wanted to imagine MIT more accurately, I should have fantasized about waking up, going to class, eating, working/reading/wasting time, maybe hanging out, eating, working more, going to sleep, and then repeating this many many times over with notable things periodically thrown in.

At the start, I was definitely too optimistic about how much fun I would have in college. I think most people are. But going further than that, I came with a more insidious type of idealism about how consistently interesting my life here should be. Some amount of excitement is unavoidable as an underclassman because everything is so new, but when the excitement fades along with the newness, it might feel like attaching the quality of “cool and memorable” to certain things was an illusion you’ve now sobered up from. Which is sad in some ways, but also an inevitable and necessary part of growth.

For me, coming to terms with the fact that most of life in general will feel unremarkable has been a reluctant process. I think for a while I tried to fight the feeling of ordinariness and overcompensate with a sort of dramatic over-enthusiasm for everything, directing my attention to the most important-seeming ideas I could think of. I was genuinely happy most of the time, but also incredibly isolated, and developed a set of habits which I couldn’t imagine having forever. I realized this semester that this wouldn’t be sustainable, mourned that illusion, and moved forward. So I don’t know. Growing up is awkward and not-cute and painful and hard, but has to be done eventually.

This semester I am feeling more cynical and less enthusiastic than last, but also more grounded and sobered and stable. I’m taking four classes and a seminar, and they are okay. I really like 14.18 (Mathematical Economic Modeling), but 6.042 (Math for Computer Science) is kind of bleh. I still care a lot about certain ideas, but I am spending less time thinking about them. I have told a couple of people that my “new semester resolution” is to be a bit more social, and I got a Facebook account, and I got coffee yesterday with a close friend I hadn’t spoken to in a long time. He told me “I’m glad you still exist.” You too, friend. 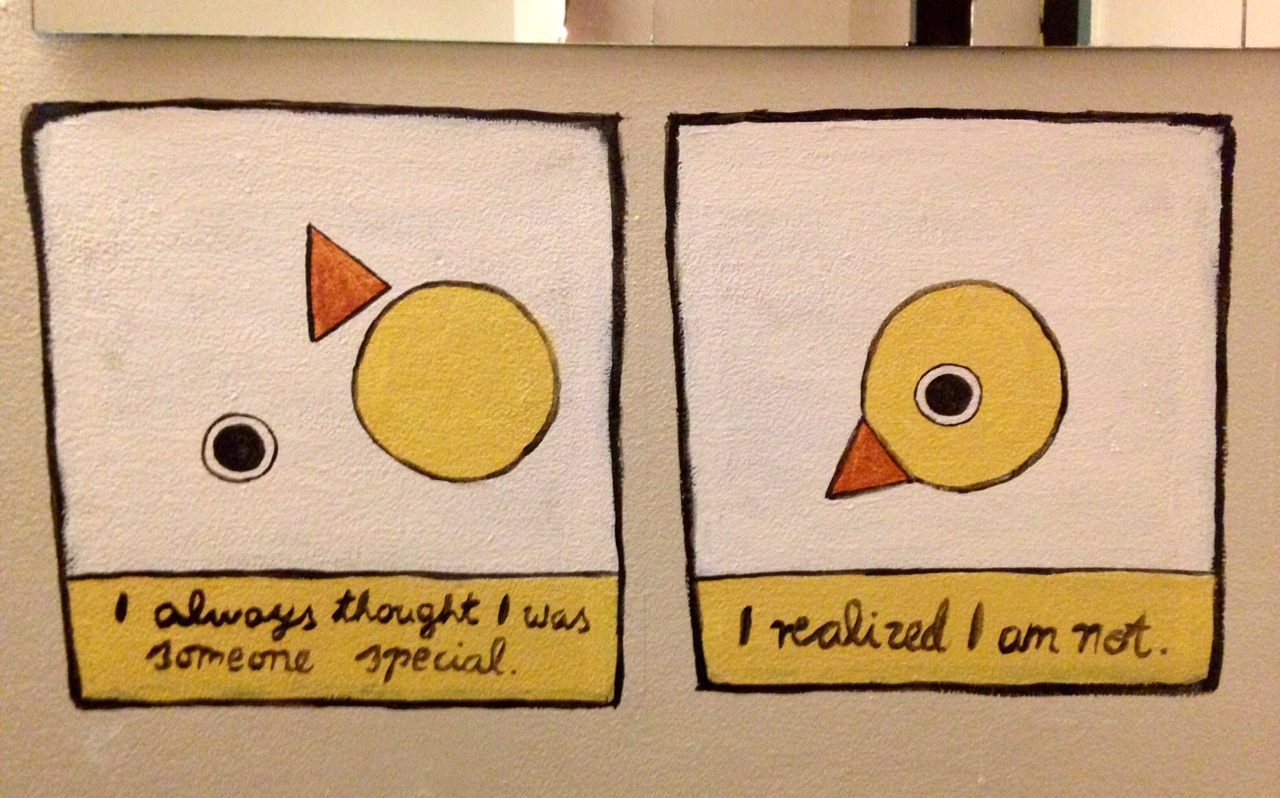 Two panels taken from a comic that I liked, painted earlier this month.