field notes on all the fruit by Chris Peterson SM '13

tending to plants, self, others

At some point in the pandemic I began to collect tropical fruiting plants. I’m not exactly sure when; it might have been after my former housemate Kevin brought home a Meyer lemon and put it in our sunny living room, where it bloomed fragrantly, like jasmine, and grew bright yellow lemons I could see from my bedroom while I read applications.

After he moved out, to become a resident tutor at Harvard, I missed the lemon, so I got another one, and a monstera and a fiddle leaf fig and bamboo and some unusual vining plants that I began to train around the ceiling of my bedroom.

Then, I bought a banana plant. Did you know you can just buy banana plants and grow them as houseplants? They are leafy and airy and will grow well from a surprisingly small pot with very little attention. Here is a picture of my first banana plant, but now I have three or four, in my apartment, and another in my office, and another overwintering in my parents’ living room. It’s not a big apartment; it’s probably too much banana plant by volume. Earlier in the year, as part of a series of talks on things we did outside work, I gave a short presentation about growing bananas at unusual latitudes to the rest of admissions office. I’ve also made some friends on the bananas.org forum, and the new Welcome Center has several banana plants in it too, that I hope some of you will see someday sooner rather than later. 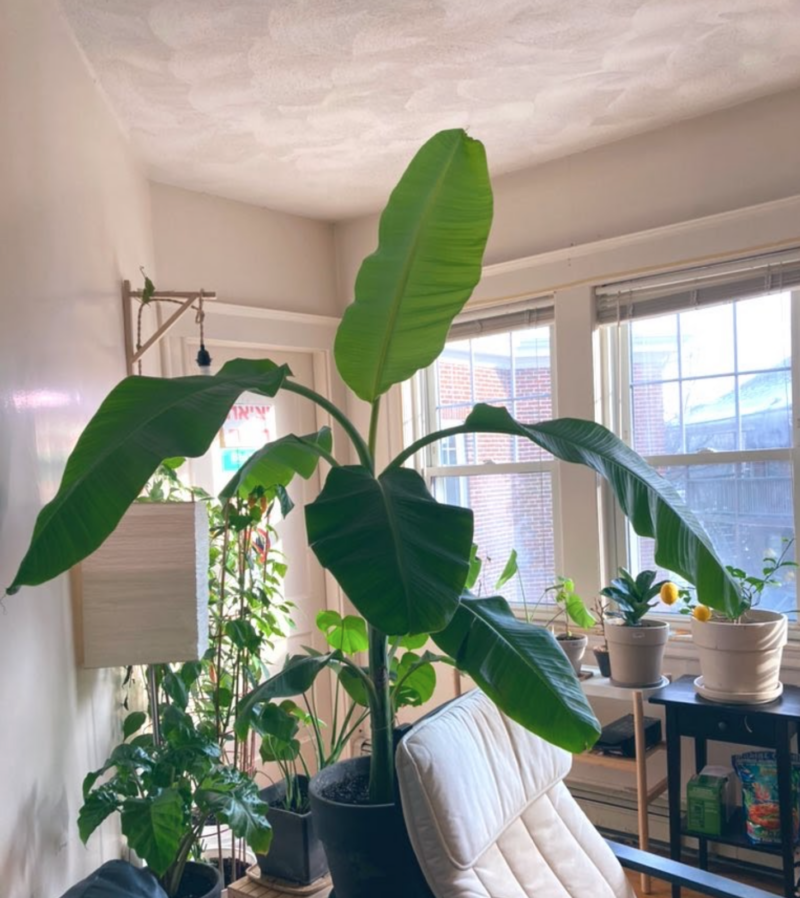 My largest banana plant — either a blue java or a dwarf namwah, sold as the former, but I suspect the latter — last spring; you can see the lemon, fruiting, in the back right

Beyond bananas, my indoor tropical fruiting plant collection now includes two different kinds of guava, two baby satsuma mandarins (I’m going to give one to my mom), a miracle fruit, and a dragon fruit. I also have four hot pepper plants that I’m overwintering in large pots. I suppose a monstera, technically, is a tropical fruiting plant, even though it’s mostly grown for foliage in the north, and not for its fruit.  Only the lemon tree has produced fruit so far (well, and the peppers), but I’m optimistic that between the consistent winter sun through my south-eastern facing windows, and the ability to bring the plants outside in the summer, the others might also yield over the next year.

Oh, and the pineapple. I forgot about the pineapple! How typical. Anyway, I had read somewhere that you can just cut the top off a store-bought pineapple and put it in dirt and it will grow as a pineapple plant, even in a small pot.  So one day my girlfriend and I got a pineapple to eat at Whole Foods and instead of tossing the top in the compost I put it in a pot and it took root and grew. The pineapple is of course a spikier plant than all of my other soft lush tropicals, almost like it’s a little ornery about having been grown from what most would call the “waste” part of the plant, and retains a morphological chip on its shoulder about the whole thing. It’s a useful reminder  that sometimes people underestimate you, but you can still bloom where you are planted, as the proverb goes. 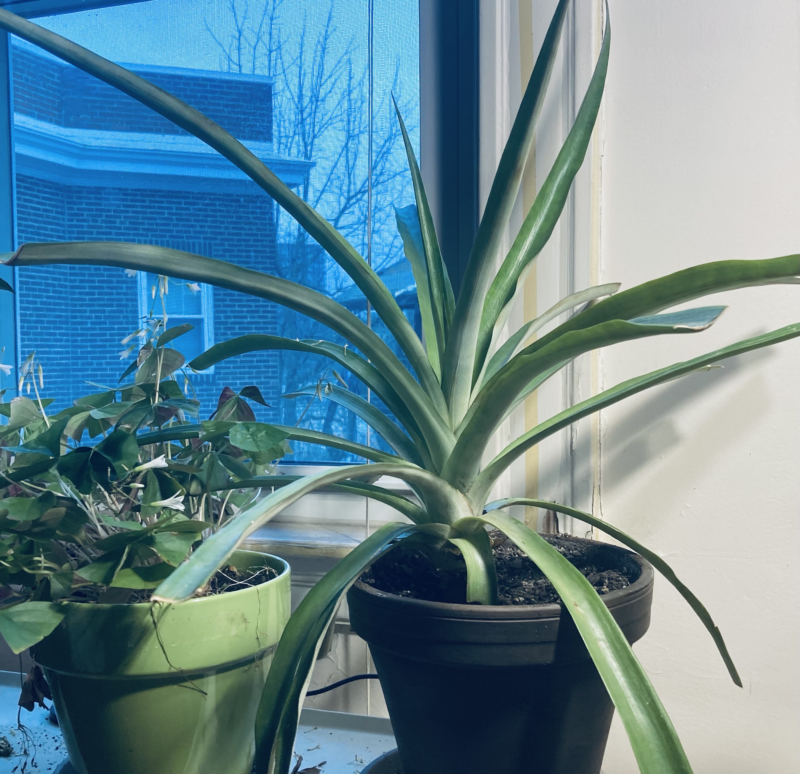 This botanical vocation is a relatively recent biographical development. I don’t think I had any plants four years ago, and if anything, I had an aversion to them, since I’d always instantly killed any green babies my friends had the misjudgment to leave in my care. I’m really not sure how to account for this developing obsession: an expression of a latent nurturing need absent pets or kids; a subconscious memetic inception from trendy planstagrams; general quarantine madness; all/none of the above. Maybe I just needed to do something different; maybe I just needed to grow.

I also can’t really explain why I’m drawn towards tropical fruiting plants, specifically. Is it because they are even more surprising to find indoors? Because they are even more saliently connected to the blooming of new life, a cycle of renewal and rebirth? Whatever the reason,  meeting this need was hard at first; I had a few websites with glossy photos deliver me dead plants in a box through the mail. Fortunately I soon discovered Logee’s, a multigenerational greenhouse in Connecticut that specializes in growing rare and tropical plants, particularly fruiting container plants in New England. Their book Growing Tasty Tropical Plants in Any Home, Anywhere has become both inspiration and reference for me, and their incredible greenhouses, where century-old citrus trees grow multiple species shielded from the snow, a destination.

Sometimes I need to learn more about plants than that book can provide. I really like watching Youtube videos featuring Byron Martin, the Logee’s owner, as he describes the genealogical and cultural history of five pound lemons. But my favorite account that I’ve encountered in this new pastime is All the fruit, hosted by a man who introduces every video by saying “Hᴀɪ ғᴏʟᴋs, ᴛʜɪs ɪs ᴀʟʟ ᴛʜᴇ ғʀᴜɪᴛ,” before beginning a fifteen minute unbroken monologue about some fruit he just found and everything he has learned about it. He’s kind of like the Tiktok train kid, except about tropical plants, with Valium energy.

I think found him when researching hardy kiwi, a relative of the conventional kiwi that can be grown outdoors in New England:

I recently had cause to revisit his channel when considering buying a lemon guava from Logee’s, so I could see what All the fruits had to say about it:

what could he mean by this

I think I love so much about All the fruit —  whoever he is —  is his unabashed enthusiasm and curiosity for the thing he loves, i.e. fruit, and the fact that he seems to just want to share it with the world, not for any endgame or goal, but just because he’s excited, and wants others to be excited too. There’s no merch to buy; there’s no thumbnails with his open mouth and eyes about to bite into a lemon to game the feed. There’s no algorithmic turn in his video: he’s clearly not performing for his audience, but sharing with them. I find this so incredibly soothing, in a world increasingly designed to demand my attention. And so sometimes, when I’m stressed, or exhausted, or anxious — which really who isn’t, these days —  I’ll find myself on All the fruit, having him explain to me how lemon guava in Malaysia tastes different.

I think that’s something that always resonates with me:  people who are not afraid to be excited about their unique interests and aptitudes. They are so special, where and when you find them. It’s part of the job that I love, getting to meet —  in person, or via application —  people so authentically excited about so many different things. Who will always, eventually, find a way to plant a seed, and watch it blossom.

In a few hours, we’ll be releasing decisions, with our open threads. It’s the culmination of a lot of work for us, and even more for you. I hope you’re spending your day caring for yourself and other things you love, and not just sitting there stressing ahead of release. But if you are finding yourself nonetheless here, anxious and awaiting, may I recommend distracting yourself with All the fruit, the most peacefully dorky Youtube channel I know.  If you like, you can post your favorite video below in the comments, and we can all explore all the fruits together.