then hanging upside-down on it

One time in Boston, my roommates and I were studying outside near Harvard, where there was a tire swing on a tree. We laid aside our physics psets and played around in it, demonstrating in a general sense the concepts of damped harmonic motion and centripetal forces, which is to say we swung around and spun each other very fast.

The tire swing reminded me of aerial trapeze, in that they are both solid objects hanging from ropes. It inspired me to fix my own somewhat broken trapeze, and I’m really happy with how the process went. 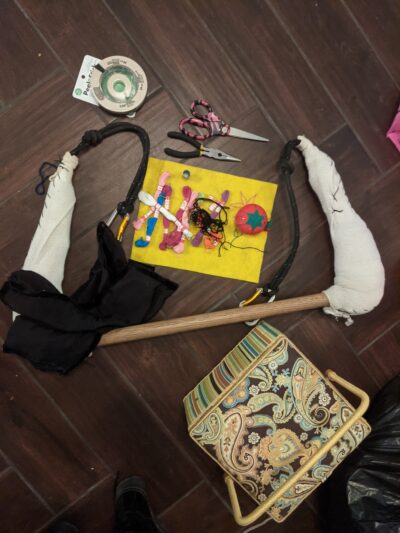 I went to a hippie middle school with 75 students in a basement beneath an aerial dance studio. We got to take trapeze classes during school, usually after math. I’d never done gymnastics and had zero dance experience, but I loved trapeze; I liked hanging upside-down and climbing the ropes, and training my body to balance in the air. Trapeze has a really satisfying learning curve the first few months, as hangs that once were too painful to hold become easier, and you gain the strength to be graceful.

I kept taking classes in freshman and sophomore year of high school, and my little sister got into it too. Eventually, as sort of a joint birthday present, we got our own trapeze.

But then I got busy, as people do, and my carpal tunnel got worse, and trapeze fell by the wayside. Also, the trap⁠01 I have no idea if calling a trapeze a 'trap' is a universal thing or if it is just what my teachers said we had started breaking, and I was not sure how to fix it.

Anyway, that tire swing inspired me to get back to practicing. Studios aren’t really an option right now, so I had to wait til I got home, where the raggedy trapeze was waiting. I arrived last week. After a late night of work, the trapeze is finally flight-ready!

I forgot to take a picture of the whole thing before, but both sides looked like this
ie, like the right side

Step One: Strip it down

As you can see from the picture, the velvet cover was slipping down the bar, and the sock cover (why did they use a sock?) was also slipping, and the foam was all in disarray. If I were doing cool hard stuff, the way it slipped could be dangerous, because I couldn’t grab the bar at the corner. I wasn’t, so it was just annoying, but still. 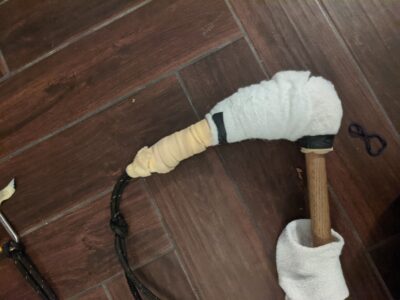 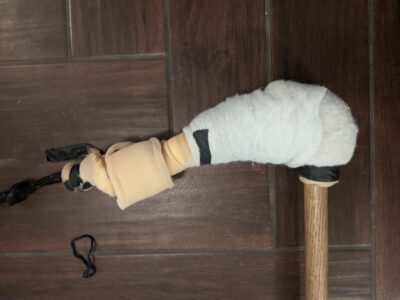 I stripped off the velvet and sock covers, and re-wrapped the foam so that it was tight against the ropes. I kept it in place with fabric tape from Michaels and some embroidery thread that has sat untouched in my drawer for seven years. (The wonders of being at home).

Next I pulled the sock cover over the elbow (ie, the soft part of the trapeze) and stitched it in place.

Shaped once more like a trapeze!
Here you can see the thread

Then I looked at the velvet covers and realized that every single seam was coming apart. I’d have to bring out the sewing machine. I am a terrible seamstress. I was too busy warring with the sewing machine to document this part, but here are the end results:

I threaded the ribbon through the hem, so that it could pull tight after it went over the sock cover.

I pulled the velvet over the elbow, but it was floppy and loose, so I needed to hand-sew it tight. 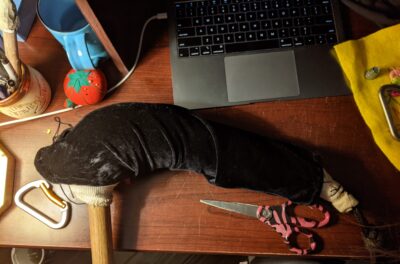 My laptop makes a cameo, because I was watching Queen’s Gambit while stitching this up. Between an embroidery needle too large to slip nicely through the fabric, and the layers of velvet and sock and foam, sewing was a pain; I had to force the needle in with a thimble to protect my thumb, then wrench it out with pliers.

No wonder I hadn’t fixed this thing before, I thought, it was so much work.

Sort of like trapeze itself, before I dropped it. I learned most of what the studio above my old middle school had to offer, but at the same time, advanced moves eluded me. I lacked the strength, or the flexibility. I would try to practice my flexibility at home, but I wasn’t good enough to meet the standards for a contortion class. No matter how I twisted, my feet couldn’t touch my head backward. I would do pushups, but I didn’t know then how to train myself to get stronger — honestly, I feel like I barely know now.

I showed my gymnast friend a couple tricks on the trapeze, and in an hour she was better than me.

I didn’t have the background to be really good, and I didn’t have the body. A taller person could probably reach their feet to their head, but my legs were too short. My wrists always hurt, so my endurance on the bar would never be what I needed.

So why do it at all? I didn’t have time, anyway.

But then I was watching Queen’s Gambit, which is a show about chess. I happen to enjoy chess. I like to think I’m good at it for someone who doesn’t know any openings and has never played competitively, but I’ve got no proof for that, and anyway I’m not in such good standing among people who do know openings and study strategy.

It sure is fun, though. I played a game of mental chess with a stranger in Spain, both of us struggling to remember where the pieces were. Before covid hit, I studied in a bookstore where a trio of white-haired men met to play, and I kept sneaking glances at the board until they offered me a game.

So trapeze? Newsflash: still worth it. 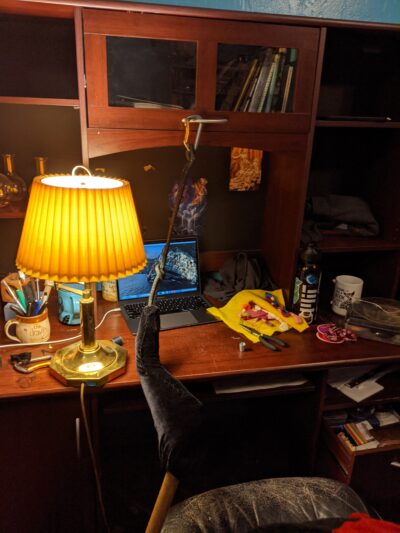 Even if I do a stretch after running which I forgot until the writing of this blogpost was designed to help me touch my feet to my head backward.

Even if, after doing that stretch mindlessly for multiple years, I still cannot touch my feet to my head backward.

Why was this the gold standard fifteen-year-old me set for herself?

I finished sewing the velvet on around one a.m., and watched the rest of the Queen’s Gambit episode in a rush of dopamine.

All done!
and hung!

Hanging from a knee or elbow hurts again, and the calluses on my palms have grown soft. At the same time, though, I’m stronger than I’ve ever been. I still have muscle memory of moves that once took weeks to learn.