I don’t spend a lot of time thinking about gratitude. That’s not to say I don’t spend time feeling gratitude; what I mean is that I don’t expend much energy on pondering the concept of gratitude. In that sense, maybe it’s an underrated emotion. We devote so much towards considering all the dimensions of rage, or resentment, or joy, or grief, but gratitude gets overlooked.

There have been many moments where I felt immeasurable amounts of gratitude but didn’t know how to express it adequately. I say “thank you” to the bus driver, so how can “thank you” also be enough for somebody who has caught me while I was falling? But there are limitations to the English language, and more importantly, there are limitations to what is considered socially acceptable. To me, profusely thanking somebody can feel like shoving a gift in their face that they didn’t ask for.

Sometimes I need to use horror to compel myself towards gratitude, like, life is precious and tomorrow I could die in a freak accident, so I should be grateful for every moment of existence. That’s the philosophy of the killer from the Saw movies, right? He forces his victims to endure so much suffering to “prove” they are grateful for the gift of life. At least, this is my understanding of his motive after binge-reading Wikipedia plot summaries at three a.m., since I am much too soft-hearted to watch horror for more than two minutes.

Even when we aren’t the terrified playthings of a sadistic killer, we are expected to perform gratitude. Recently, Selena Gomez was eviscerated for purportedly not showing enough gratitude towards her kidney donor; at any awards ceremony where the winner is expected to give a speech, their speech had better include expressing thanks to everyone who helped them get to that stage. A perceived lack of gratitude is indicative of a lack of modesty, or so the logic goes. We think of gratitude as a moral virtue, and like other moral virtues, we expect it to be signaled.

Anyway, it’s Thanksgiving, and here is some of what I am thankful for: my mother, my father, and my brother; my friends, both far and near; my grandparents; November sunshine; the privilege of learning; home-cooked meals; my classmates and professors; public transportation; everybody who has taken a chance on me; and you, for reading this far. 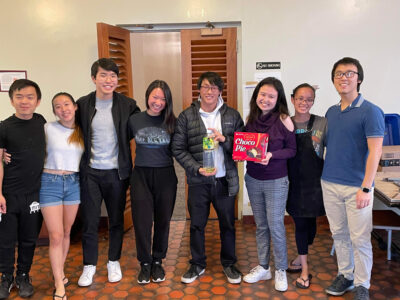 with some friends who made dumplings