continuing to become myself

Sometimes I worry I have too many blog posts that are just paragraphs of my thoughts without any exciting MIT anecdotes or events. I feel like my thoughts can be pretty weird. Maybe people mostly come to these blogs to see what fun stuff the bloggers are doing; maybe they don’t want to hear the ramblings from the inside of my head, maybe they won’t find them relatable or interesting.

But when I expressed this worry to one of my friends, they pointed out to me that even if that is true for most readers, there might still be just one person, or one in a hundred, for whom my ramblings resonate perfectly. And if that’s the case, then that’s all the more reason that I should write: so that they know there’s someone out there who thinks the same way. If that’s you, hello. I love you, and this post is for you.

During the semester, mired in work and trying to juggle a million things, I never have as much time to sit and think as I’d like. So it’s during breaks that all those neglected thoughts come roaring back to me. Over IAP, or the summer, I always end up realizing so much about myself that somehow became true while I was too busy to notice.

This IAP I’ve realized that, continuing on a theme from my summer, I grew a lot this fall. Or maybe I was finally able to show growth I already had? During the last academic year, learning on Zoom, pre-vaccines and terrified to interact with anyone outside my household, in a lot of ways it felt like my life was paused. (I’m sure lots of y’all can relate to that…) I was still learning, academically and otherwise, but it was all happening more slowly. Moving through the world felt like struggling through a viscous fluid. Or like those dreams (maybe these are just me?) where everything is so blurry, and you’re moving so slowly, and always going in the wrong direction no matter how hard you try.

When I came back to campus I realized I’d forgotten what it felt like to move through air, to breathe clearly, to be awake instead of trapped in a dream gone wrong. And I had so much moving and growing to make up for. 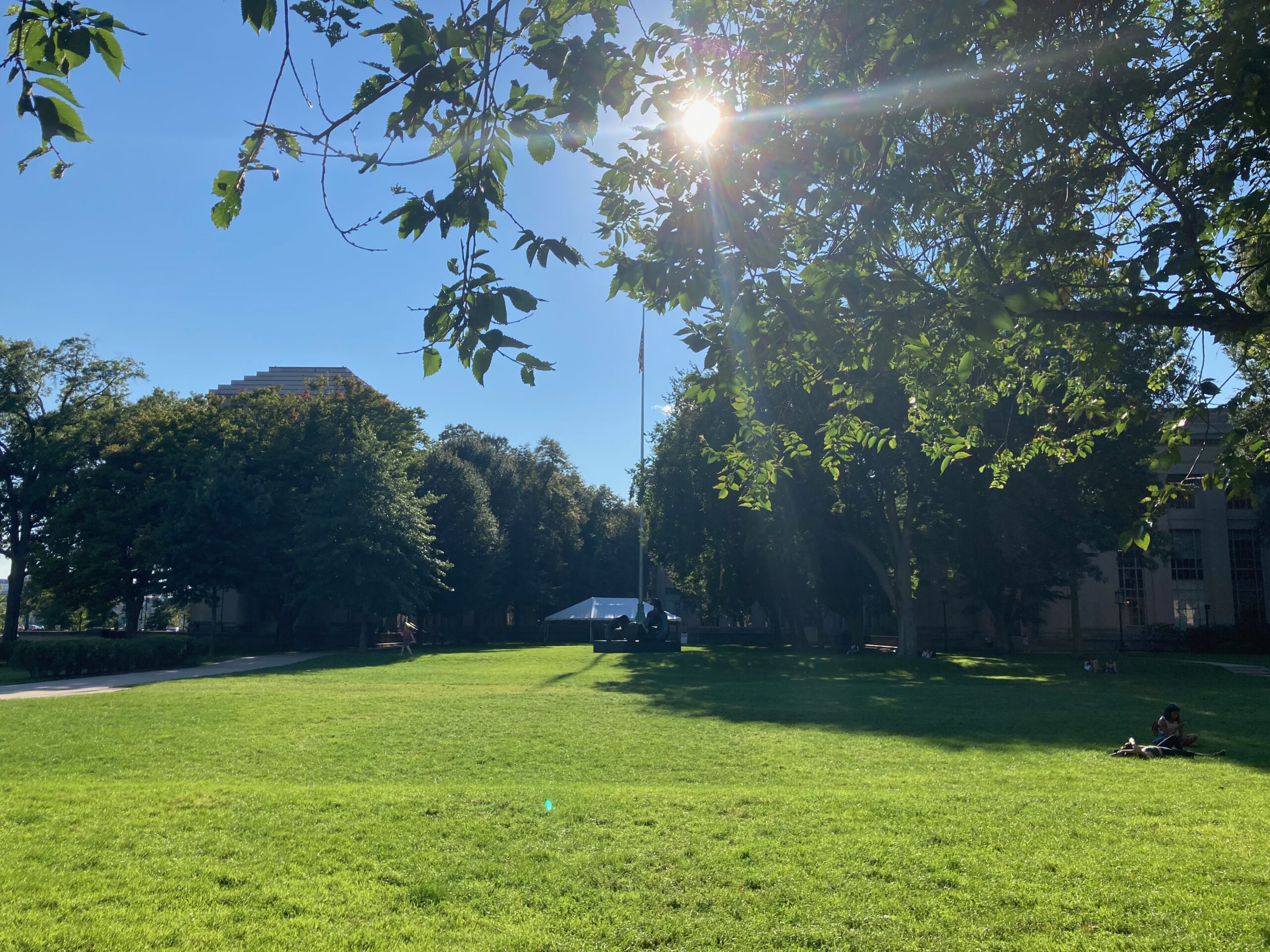 I’ve gotten kind of into taking photos this semester, just on my phone, of interesting arrangements of light and shapes. I added a few of them to this post. This is Killian in September.

It started with in-person REX, which, just like my very first REX three years ago, reminded me poignantly of why I chose to come back to MIT. Wandering around campus late at night. Watching the fire show and seeing the performers — once intimidating older students, now my friends — pull off tricks that looked impossibly and awe-inspiring. Seeing people, young and old, make the very beginnings of deep friendships in the East Campus courtyard. I felt like a frosh again in the best possible way: I felt as though MIT is a place where anyone can become anyone. Where you can be who you want to be, if you work hard enough. Where you can choose your own self. 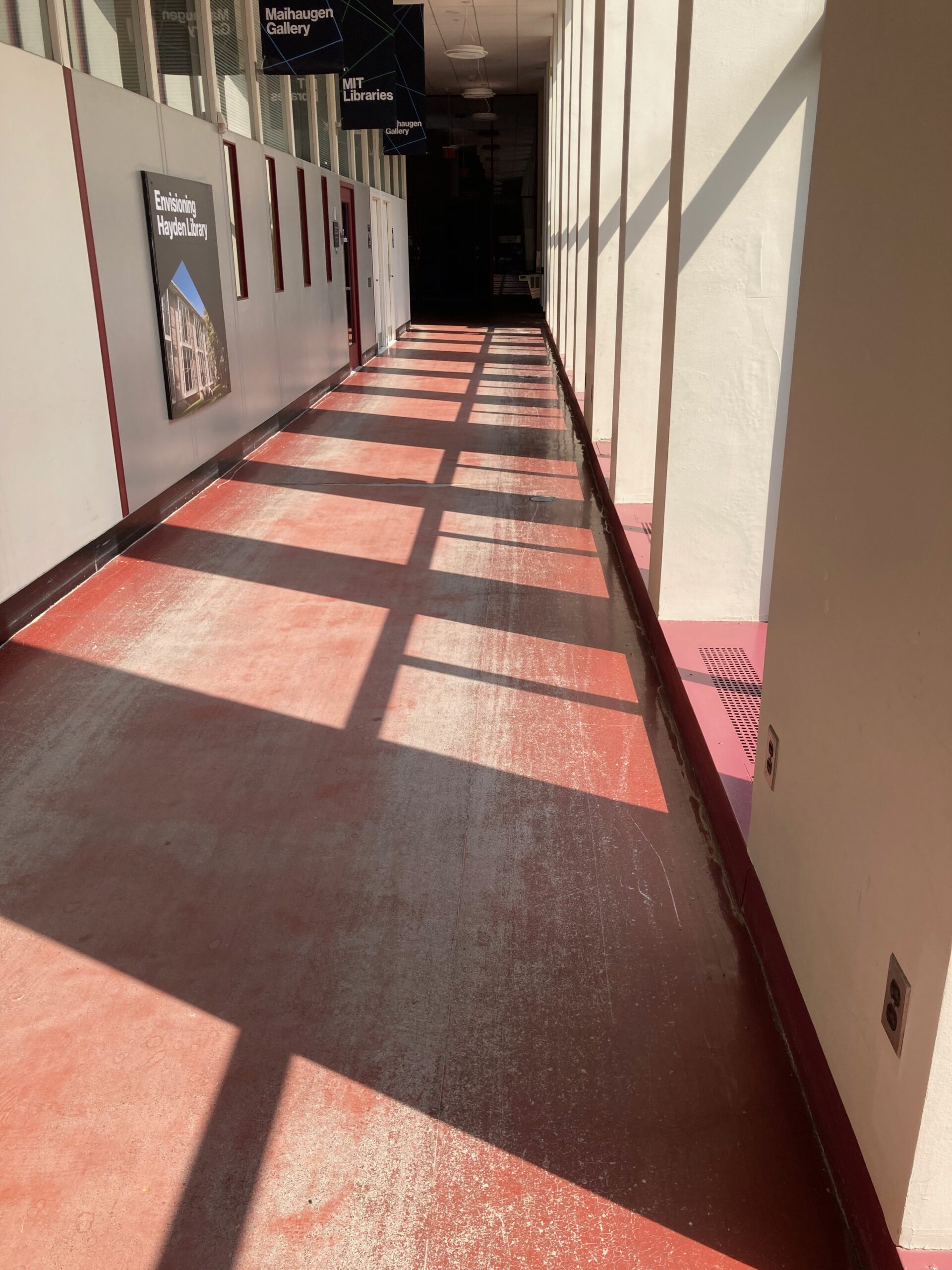 The sun shaped through the Hayden library windows.

Next, I showed up to the first meetings of my in-person classes. When my professors said “I’m so glad to be back”, I actually teared up with joy and relief. At the first chance for audience participation, as hands shot up around the room, I found myself, uncontrollably, grinning under my mask. Again, while struggling through the viscous fluid of Zoom school, I had forgotten that it was even possible to move through air. That first week of class reminded me why I love learning, and that I can be good at it when I have the right environment to help me succeed. 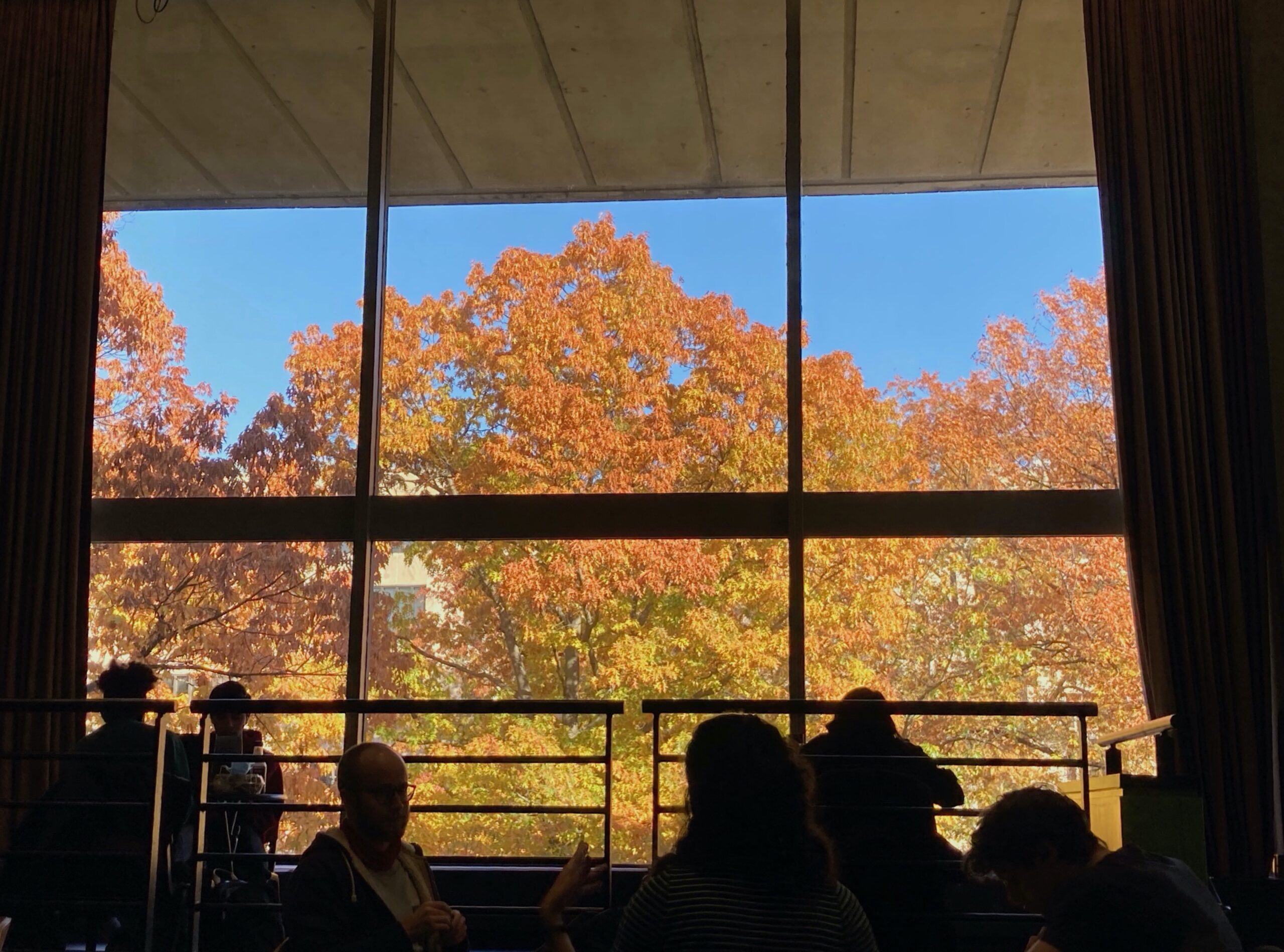 As the semester continued, classes got busy, and of course I got a little stressed. But I was surprised to find that everything was much easier to manage than it used to be. I went to therapy regularly during the last year. The impetus was the trauma of the start of the pandemic, but most of the actual work was dealing with the rest of my issues (’cause baby, we all got ’em). I kept going back, but I didn’t know if I was really getting anywhere. Sometimes it felt like I was going to have the same problems forever. But when the fall semester got tough, I felt myself handling it better — I realized that all my efforts actually did pay off. It felt amazing to just be able to deal with problems that used to make me break down. 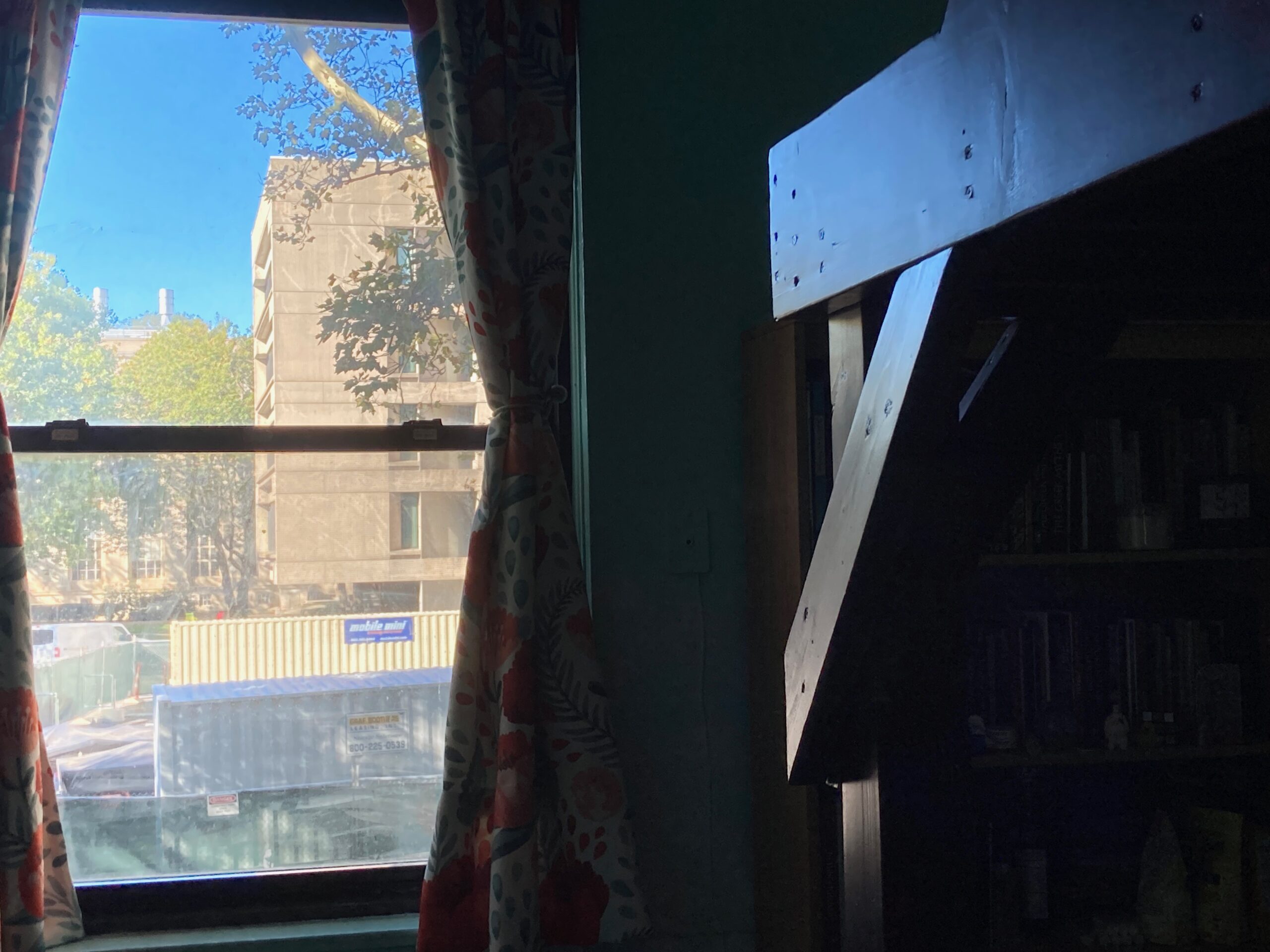 My room. I loved the color reflection on my loft.

At the end of the semester, I only had one final. This meant I was able to spend a lot of the last couple weeks seeing my friends. And here, too, I realized I had grown. Freshman and sophomore year, I had friends, but I often struggled to connect with them. I was too scared to ask people if they wanted to hang out, in case the answer was no. I would see other people doing fun stuff and want to join, but feel too awkward to ask.  And after spending time with someone, I would often think, that was so great. I’d like to see them more… but it never occurred to me that maybe I should tell the other person that. 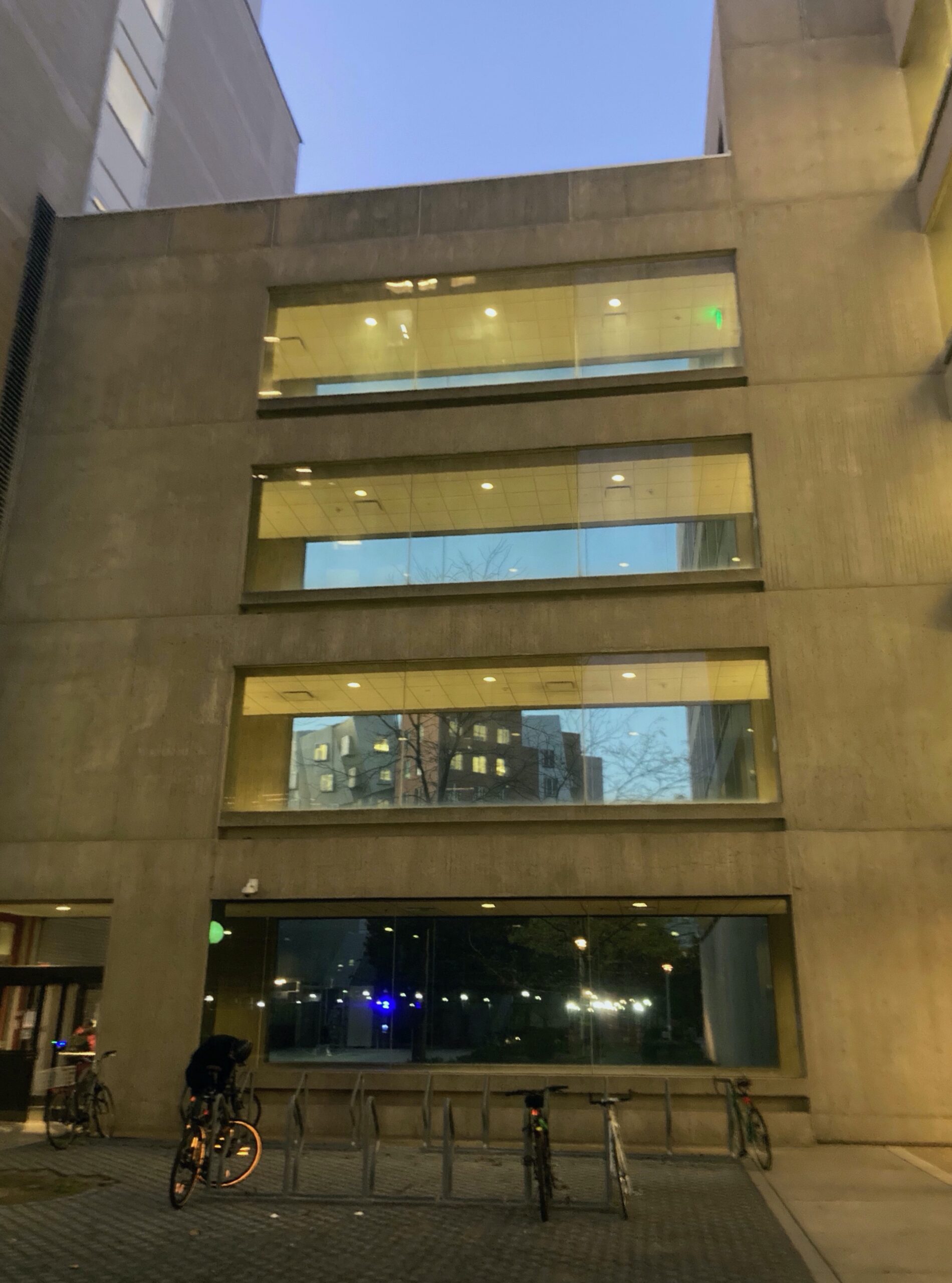 Building 66 (right next to EC, my dorm) lit up at night. You can see Stata through it.

Over the last year, I didn’t even have the chance to have those missed connections. But somehow, not getting the chance made me all the more determined to actually make connections once it was possible again. And it turns out that when you ask people to hang out, they usually say yes; when you ask people to join in, they’re usually happy to have you; and when you tell someone you want to see more of them, they usually agree, and then you become closer friends. It’s kind of magical. In the lounge at midnight, laughing and talking with old friends and new, I realized that the joy I was feeling was a joy of community, one I hadn’t felt in a long time.

It feels really nice, this IAP, to be able to reflect on the fall semester and see that I’m not who I used to be. For a while in the middle of MIT, I felt like every year, time passed, but I didn’t change: I was dragging my too-young self into years where they didn’t belong. Now I feel like I am becoming my older self. This new self doesn’t have everything figured out, and certainly isn’t done growing, but at least they’re in motion. And moving feels good. 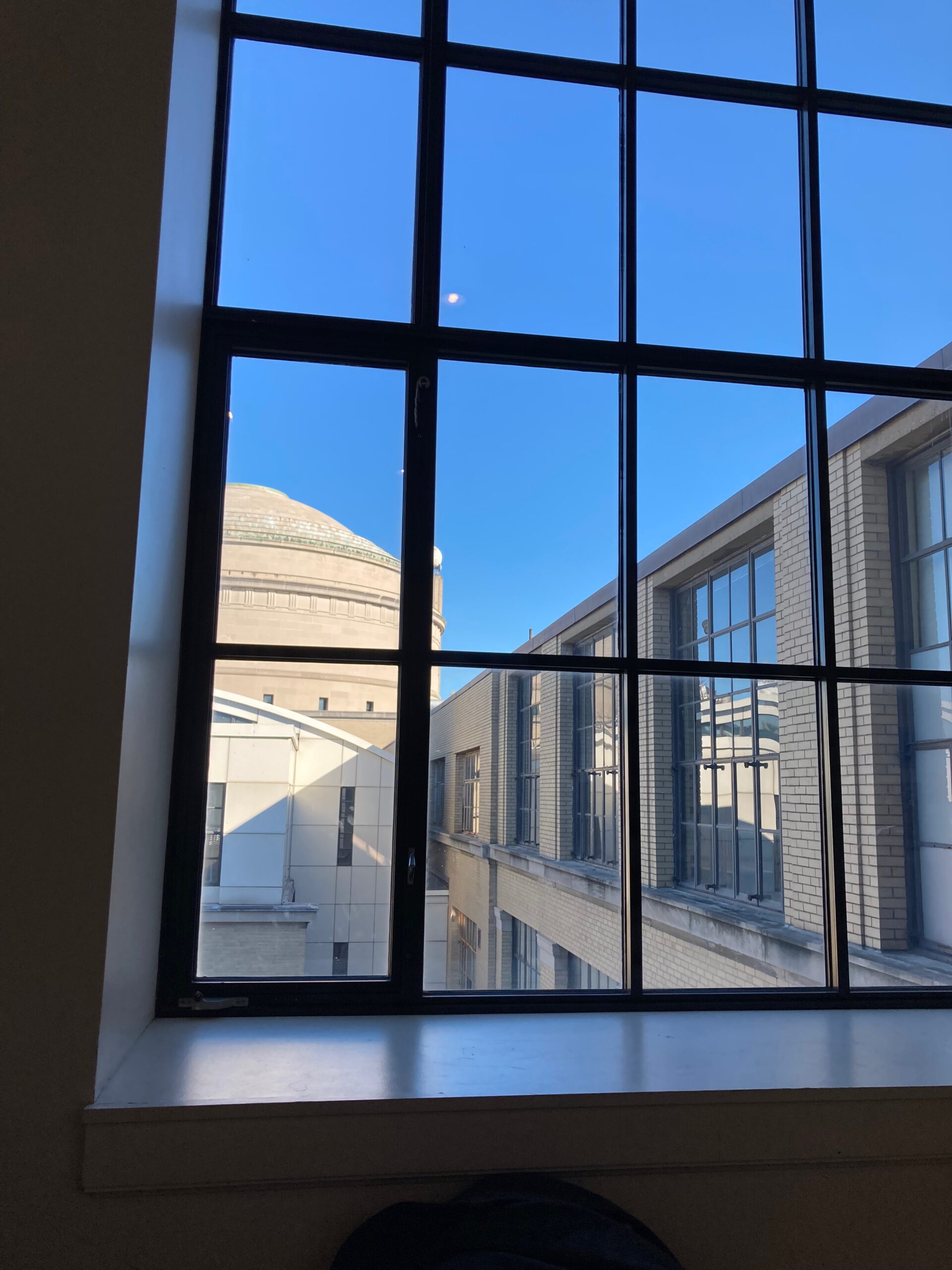