How to immerse in education while learning nothing

this is a guest blog post from my dear friend aidan chambers ’23 who is like an older brother to me! he did something that i can’t tell is crazy or stupid or maybe even a little bit of both and i b e g g e d him to write a blogpost about it. here it is!

I think I have to provide some context before I begin my inane rambling. For anyone who doesn’t know, Duolingo is the result of some talented programmers and language teachers attempting to combine Rosetta Stone and mobile games and doing so surprisingly well. If you’ve never used it I can’t promise it’ll make you fluent overnight but it’s a great and free way to start learning (Duolingo please sponsor me). I’d used the app in the past to learn Italian and to refresh my Spanish, and recently decided to get back into the habit of using it once they announced Arabic for English speakers. In doing so I found out that Duolingo had introduced Leaderboards, which ranked players into competitive leagues based on their level of participation that week. The app awards experience points (XP) for each lesson, with ~10XP corresponding to a normal 5 minute lesson and the top 10 players with the most XP at the end of a given week would be promoted from to the next league, leading from Bronze League all the way to Diamond. I had also noticed the addition of the Legendary achievement, which was awarded to the person who had finished first 1st within the Diamond League, essentially being the world’s best in Duolingo for that given week. At first I was rationally apprehensive of chasing an achievement that would require me to best ~300 million other users and invest several hours per day, and decided to continue properly learning and continuing a healthy devotion to this app. About three months after I made this decision, I found myself stuck in quarantine, coincidentally at the bottom of Diamond League, and with a week between the end of spring semester and the start of my summer projects, and all rationality went out the window.

The leaderboards would open at 8:15 PM Sunday evening and continue until the same time the following Sunday. As soon as the leagues restarted, I began working to get ahead of the initial clustering. My plan at this time was to go back and ‘perfect’ the Spanish and Italian trees, which would easily be done with about 4 hours a day and would award 18,000 XP, which should have been more than enough given that the champion from the week prior had finished the week with ~15,000XP and the runner up had only ~5,000XP. I put in about two and a half hours and go to sleep.

I wake up to a notification that I’ve lost the 1st place spot. It is here that I meet the person who would throw a wrench in my plans and make this week 10 times more difficult than need be. Brenda Soto was a Duolingo champion multiple times in the past, holding a collective 210,000XP over 4 years compared to my measly 30,000XP over 6 years before starting this endeavor. Soto had seemingly stayed up hours later than I had to put herself 1,000XP ahead of me and firmly in first place. Oblivious of what this would result in, I decided to work for the rest of the day to take back the first place spot, staying on Duolingo for about 8 hours to take a 1,000XP lead and completing Italian in the process.

Day 2:⁠01 It’s worth mentioning that this week would have been a relative cakewalk in Brenda’s absence, as the third place winner gathered less than 7,000XP by the end of the week which both Brenda and I had passed midway through day 2.

Whatever hopes I had that my initial hustle would leave me securely in first place are dashed as I find that it would take much more to unseat a former Duolingo champion. I begin to try and refine my efficiency and start treating Duolingo like I’m speedrunning a video game, essentially forgoing any hopes of healthy learning this week and upholding the idea that XP is king. I continue onto the Spanish tree with the intention of being as efficient as possible⁠02 For anyone curious Duolingo will remind you but not award penalties for refusing to use accent marks or punctuation and considers writing out the arabic numeral as a valid translation of any number, i.e. when translating fifteen,sixteen, seventeen from English to Spanish 15,16, 17 is as valid of a solution as quince,dieciseis, diecisiete. , eventually reaching ~10XP per minute though my current plan required me to make minimal errors and to be typing at full speed for up to 10 hours a day, the equivalent of me essentially begging for carpal tunnel syndrome.

At this point I’ve sunk in at least 30 hours within about 3 days just to stay ahead of Brenda, when I initially planned to put in a maximum of 28 hours over 7 days. At this point my primary motivation switches from wanting the Legendary achievement to simply wanting the time I’ve invested thus far to not be in vain. I know there are plenty of economists who’d want to bring up the sunk cost fallacy here, to which I’d like to remind everyone that the foundations for this endeavor were not rational to begin with. I then find out that Duolingo Mobile has a feature called XP Ramp Up Challenge (which I’m going to refer to as XPRUC), which awards 40XP for 20 correct answers within 105 seconds. I essentially trash my previous technique and end up just spamming this feature on loop for several hours a day, resulting in my passing of the 18,000 XP marker I had hoped to reach within a week before the end of day 3.

I come to find that XPRUC scales in difficulty the longer you use it, and after two days of using it all the questions come to focus on minute differences between different verb tenses. In my efforts to prioritise conversationality over fluency I never paid much attention to these before and certainly don’t have the time to do so now. I come to circumvent this by remembering that Duolingo is not offered solely in English, allowing me to sign up for inglés and inglese, and gain XP for “learning” English as though I was a native Spanish or Italian speaker. For whatever reason, the English course for Italian didn’t seem to be as developed for the XPRUC, and only had vocabulary from a handful of lessons, allowing me to spam it on repeat without worrying about the difference between sembrerebbe and sembrassi. By this point I have earned more XP within 4 days than I had within the 4 years before this week.

By this point Brenda seems to be slowing down and I manage to finish the day with a 7,000XP lead, hoping that I would be able to spend the majority of my waking hours doing something other than Duolingo. Because of the limited amount of vocabulary the Italian XPRUC comes to test me on, I’ve come to almost memorise many of the solutions and I start watching movies in the background⁠03 I got around to crossing some movies off of my to-watch list, including finally watching Inception although I’m like 70% sure I actually understood the plot and that it wasn’t just a fever dream with interludes of Italian and Spanish. to make this week less mundane. Duolingo sends me my weekly progress report email to let me know I’ve invested 43 hours so far. According to their website, ~34 hours of practice on Duolingo provides an equal education to a semester of a university college course so if anyone knows a way I can get HASS credits from MIT for this I’m all ears.

I have been deceived by Brenda. After her drop in activity on day 5, I woke up to find that my 7,000XP lead had been reduced to a mere 1,500XP and lessening by the second as she was still online. I end up committing 11 hours alone on Saturday just to maintain my spot, believing that falling behind at the last second was unacceptable.

As a result of my Duolingo oriented sleep schedule I woke up at noon on Sunday to find that my 8,000XP lead from the night before still remained. I found that the most efficient method of gaining XP earned ~1000 XP per hour, and with less than 8 hours left on the leaderboard I finally felt as though my first place spot was secure. I continued minimally throughout the day as I watched the timer count down until I had finally made it: 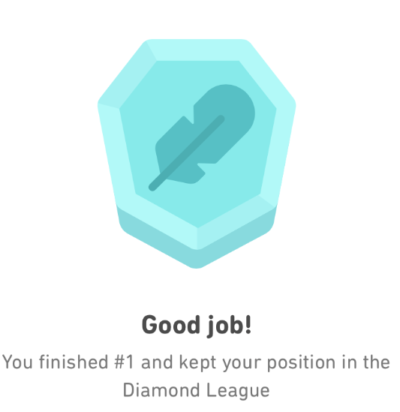 I have a few recollections from this week as a whole, the first and foremost being that I never want to do this again. Secondly, I ended up with about 56 hours across 7 days, the result of literally trying to use Duolingo in every waking moment⁠04 I began to invent rules for myself to ensure I was gaining XP even when I wasn’t focusing on Duolingo, including limiting myself to 1 bite for every 10XP I earned to ensure I was still productive or requiring myself to do at least 1 XPRUC round between each set while I was exercising. . I had gone into this with the hope that I’d use this time to knock out my quarantine goal of formally learning French (notice how that isn’t mentioned anywhere here) but in the name of XP efficiency I can say I learned almost nothing from grinding an education app for 8 hours a day for a week. I can also say that holding the title ‘Global Duolingo Champion for the week of May 17th to 24th’ has been much less gratifying than I convinced myself it would be during the week, but wish any of y’all the best of luck if the rest of this recounting hasn’t yet discouraged you from trying this. 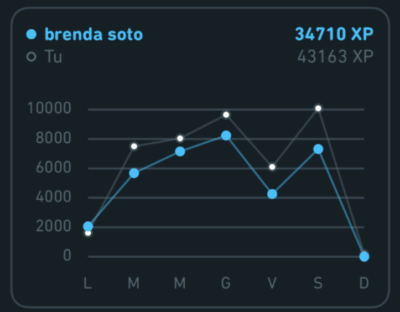 experience chart over the week