On this day celebrating eagles, barbeque, and the adoption of the Declaration of Independence (not the signing; get your facts straight, kids), the City of Boston is shrouded in fog and a light sprinkle of rain. This is the edge of the Tropical Storm/Hurricane Arthur (now lowered to a Class 1 storm), the foreboding weather phenomenon that caused Boston to reschedule all 4th of July festivities for last night as a precautionary measure.

In response to this announcement, MIT officially closed at 3pm yesterday and the streets around campus as well as the Harvard Bridge were blocked off by around 6pm. People got out of work and summer classes early, braved the heat and humidity, and staked out a spot somewhere by the Charles.

As for me, a group of people who normally live in B Entry packed up some snacks and headed down to the Cambridge side of the river at around 7:30pm. The patches of grass weren’t as littered with picnic blankets and lawn chairs as last year, probably because those coming from out of town couldn’t reschedule their road trips on such short notice.

We set up camp (and by that, I mean laid out a couple of bed sheets) across the street from Killian Court, near a clearing in the trees that line the riverside walkway and one of the many speakers set up to broadcast the Pops concert live from the Hatch Shell. You can watch the concert here for the next month or so if you’re curious.

After that, we settled down, started snacking, and listened to the Pops play music from West Side Story to swing to a celebration of the Roaring 20s. Other musical guests were interspersed in the performance, including Megan Hilty (of Broadway fame and the TV show Smash), the Boston Children’s Chorus, and the Beach Boys (who started performing over 50 years ago… I felt so young and n00bish). One interesting thing about sitting and listening to the performance live rather than watching on TV is that the commercial breaks are just silent pauses, or occasionally the conversation of the announcers if the sound operator forgets to silence the microphones.

At around 10pm, the hosts of the Pops show announced that they would be skipping the 1812 Overture and jumping straight to the fireworks show because Hurricane Arthur was predicted to arrive in 45 minutes. And the show was amazing; I can’t help but marvel at how much skill the pyrotechnicians must have to design and execute such a beautiful display. My friend Jamal E. ’13 took a couple pictures (be warned: cell phone quality), so I’ll stick those in here. 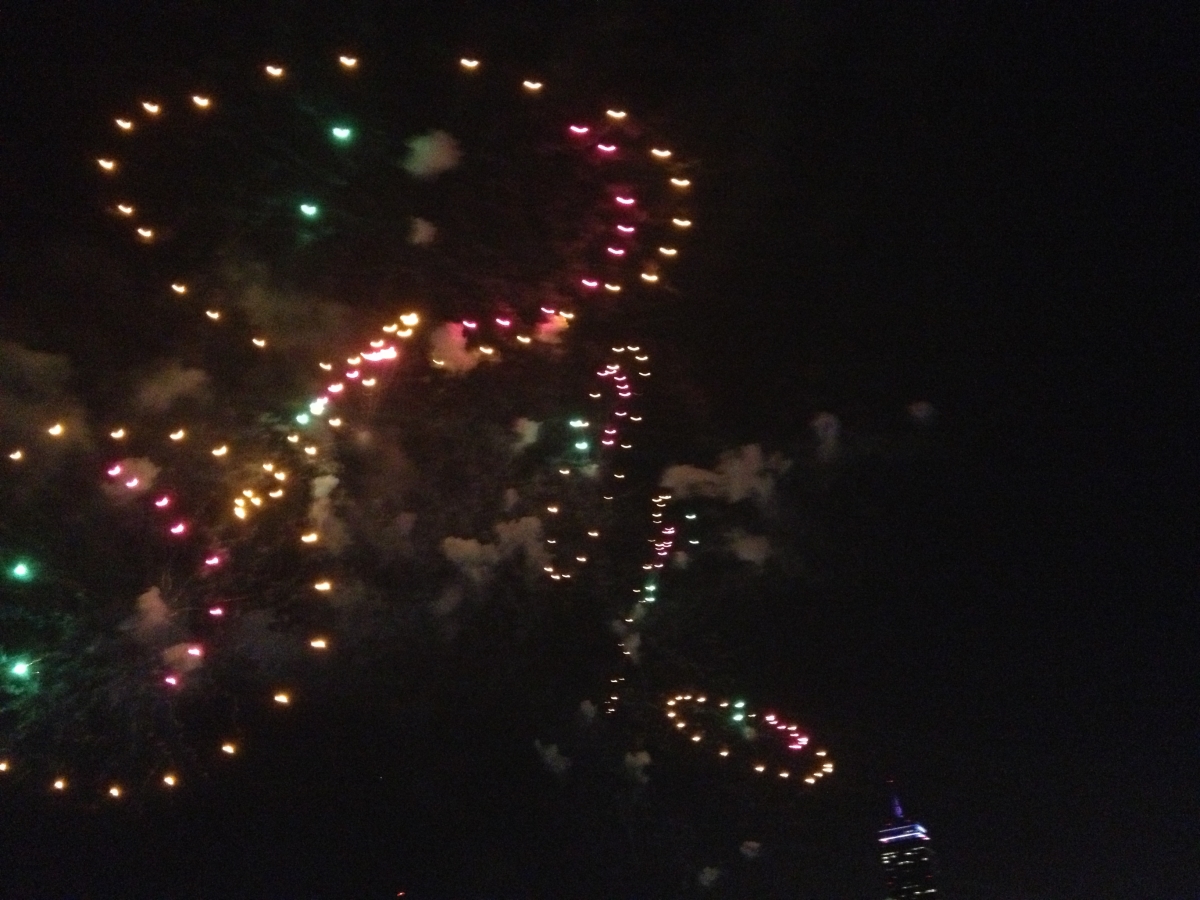 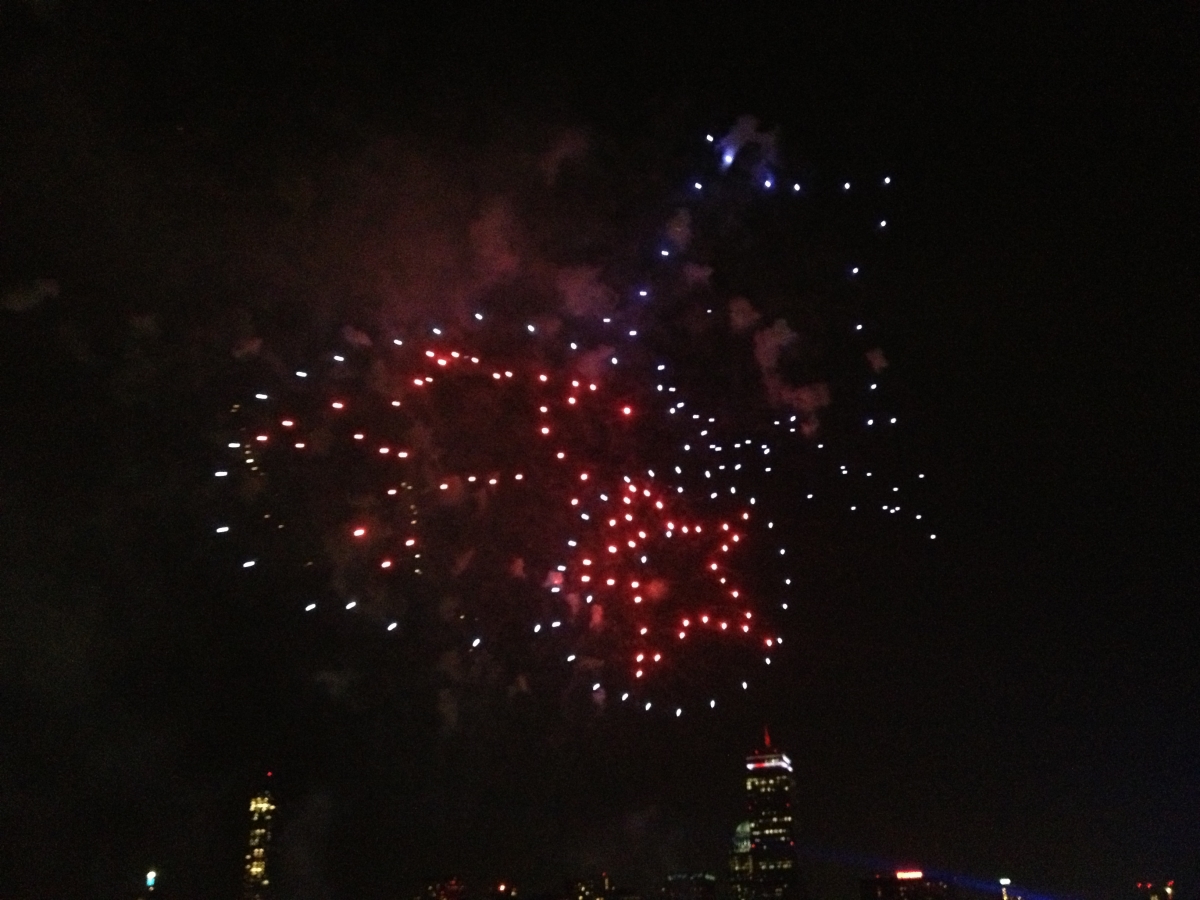 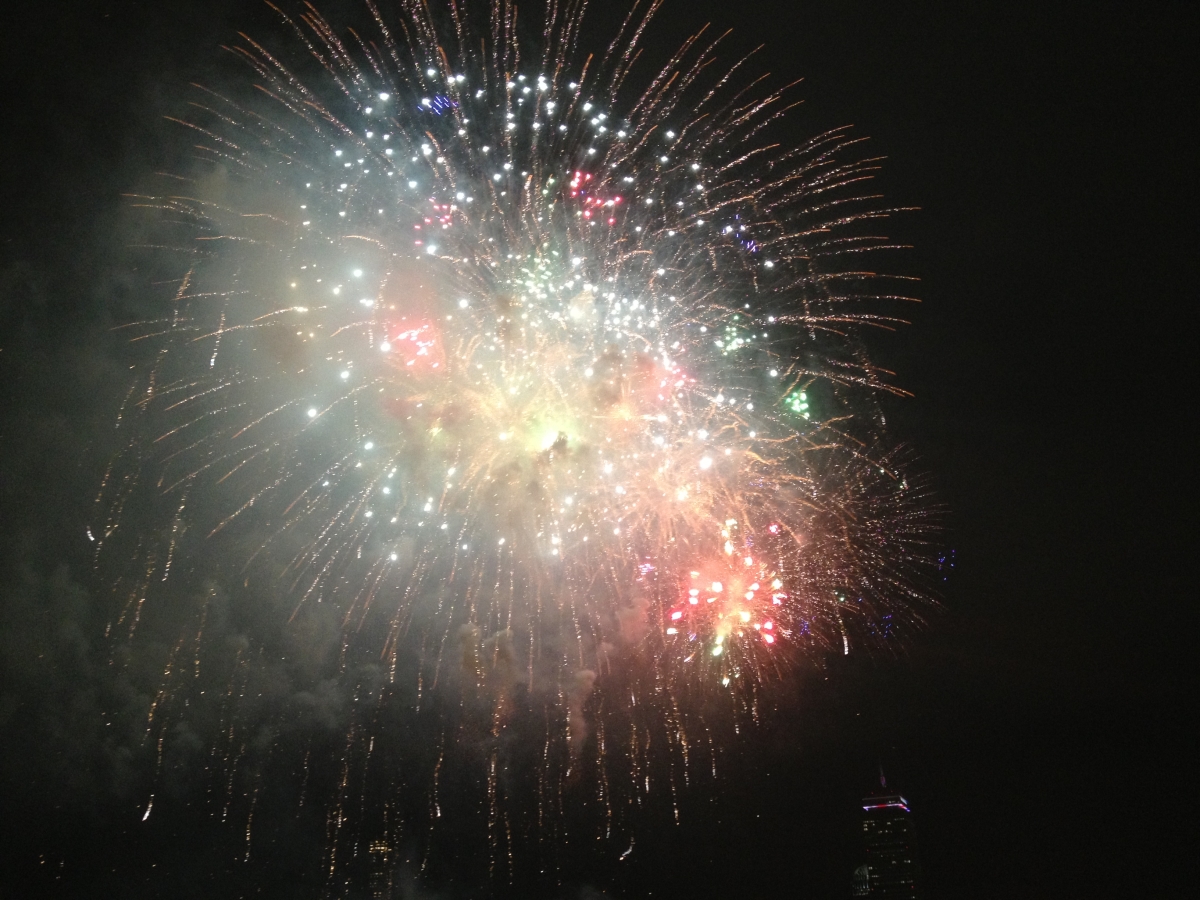 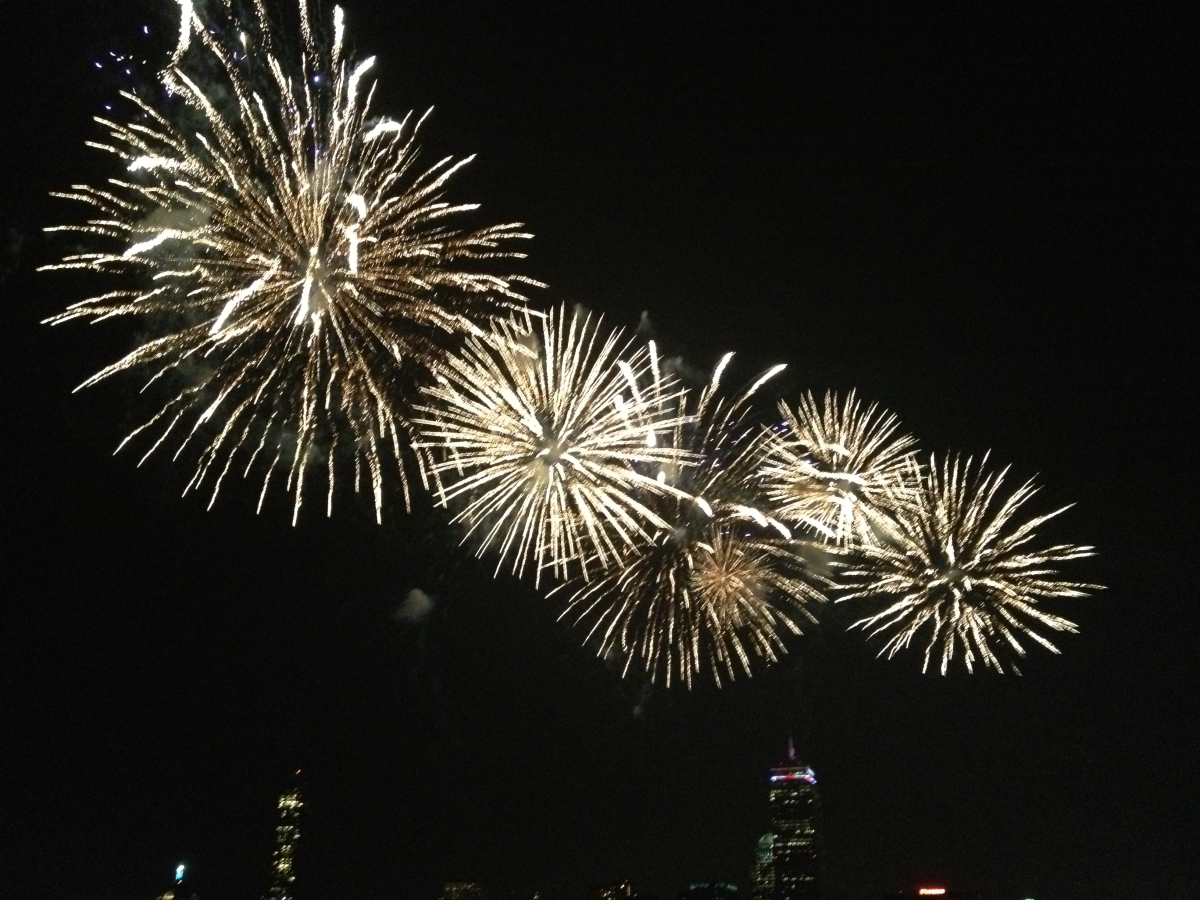 Immediately after the show ended and the applause of thousands of onlookers died down, the police loudspeaker came on and ordered for an emergency evacuation of the area. Speakers were collapsed, people gradually scattered, and, as soon as my friends and I had made it back to MacGregor, a thunderstorm hit. And by hit, I mean a torrent of horizontal rain and wind swept across the sky and ground and buffeted everyone still wandering about outside. People screamed in surprise and ran for cover, a few tried to futilely hide behind umbrellas as the wind collapsed the plastic around their bodies, and the strange mixture of thunder and lightning and an emergency siren echoed throughout the gales.

Last night seemed to be the worst part of the thunderstorms, though, as the hurricane appears to be passing by Boston with only a moderate amount of wind and rain today as it continues to move up the East Coast.

On this grey day, though, my friends and I are staying inside, watching World Cup games, making take-and-bake pizza and s’mores fudgcicles, and just having a lazy day off while the rest of the nation prepares for huge celebrations tonight. It’s weird; like being in a different time zone from the rest of the United States. But then I think about how strange the 4th of July celebrations must seem for anyone who didn’t grow up in this country, and wonder how it came to be that we launch exploding pyrotechnics into the sky to celebrate the idea of freedom.

Anyway… back to TV, now, and painting nails with a friend. And happy 4th to those that celebrate this particular somewhat-arbitrary holiday. 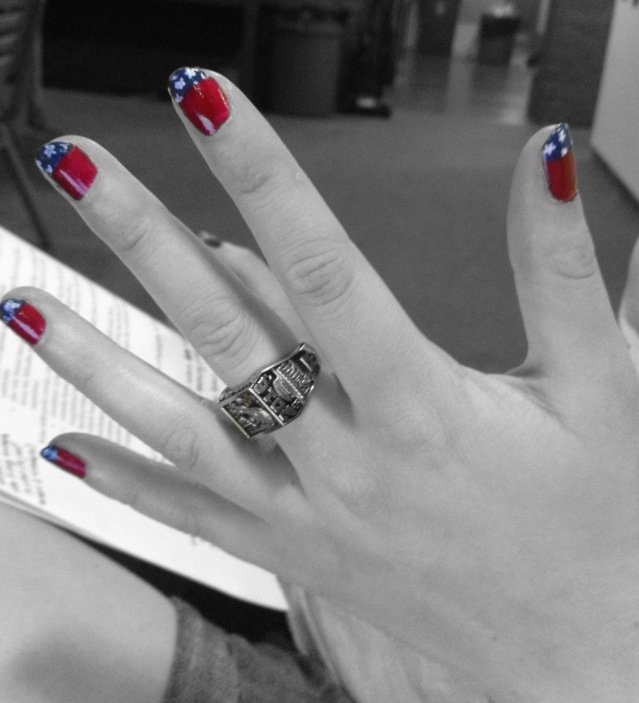 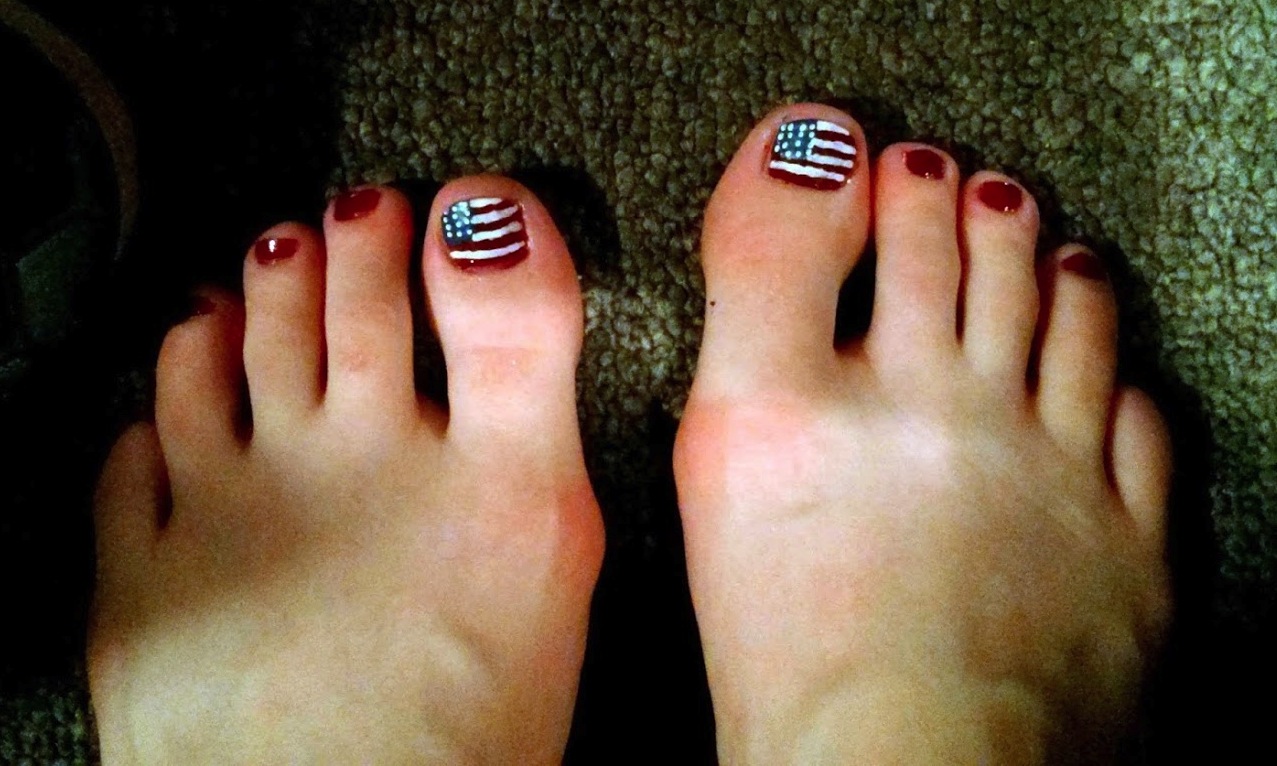