(intro post) an inner dialogue about my first month of classes

When I tried practicing for the swim test, I realized how long it had actually been since I swam. This pool wasn’t like the neighborhood pool where I could slowly ease into the shallow end of the pool feet first so I could get used to the water temperature before going out further and further until I was eventually in the deep end. When I jumped in, I remember being suspended in this void for a few seconds, my legs swaying back and forth underneath me while I tried to propel myself up.

Keep in mind that, to pass the swim test, you have to travel down the lane four times, two trips down and back. I only made it down half of the lane when I grabbed onto a lane divider, gasping for breath as chlorine stung the back of my sinuses.

Friday marked my first full month of classes at MIT. Back in high school, the first month usually marks the second or third unit that we’re learning in class. Here, I took two midterms last week, and a bunch of my friends are taking theirs this week and next week.

As much as I enjoy what I’m learning in my classes, the relentless stream of assignments and learning content makes it so that you have to keep doing assignments, have to keep moving and doing things. Relax for a day, and you’re already sinking under the workload. It gets stressful, especially when I see other people cruising through harder classes just fine while I’m struggling at the intro level. And you have to take care of yourself now??? Add early adult responsibilities onto academic rigor and you have a confused mess (me).

One benefit of having to walk a long way from Next House to campus is that I get a lot of time to think for myself. So I have these inner dialogues with myself about handling college that go along these lines: 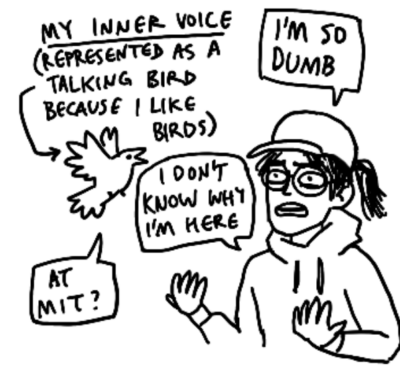 me: dude a bunch of tourists saw me cramming pita bread into my mouth while i was sitting on top of that statue in killian court. their minds were probably like “whoaaaa Massachusetts Institute of Technology! future leaders in innovation and science very cool!” and then they see some kid squatting on top of the statue and wolfing down pita bread like a feral animal

inner voice: Well, to answer your previous question, you’re here because you got accepted

inner voice: Why does that matter? You’re here now.

me: but there’s people who can do whole psets on their own in, like, 2 hours. it takes me at least 8 hours to do a pset WITH people

me: i like STEM and i want to get involved in it. it’s just that…i don’t think i have the skills to pursue STEM, y’know? everyone else is just built different. when everyone else in my group know what they’re doing, and the problem they’re solving takes me so much longer to figure out on my own, i don’t know if i’ll be able to survive the coursework here 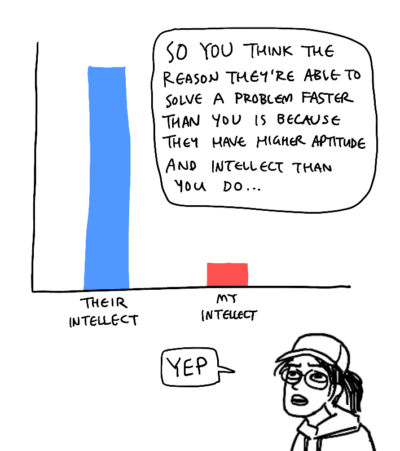 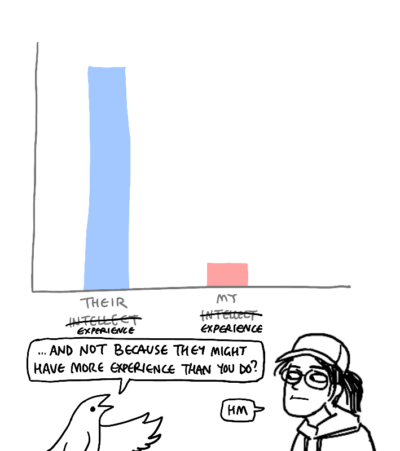 inner voice: Besides, this is a good thing, right? Think about it as an opportunity to learn from your peers. I know that you insisted on doing homework on your own back in high school if it wasn’t a group project, but–

me: but now i need to be with people because i can’t even do a single pset problem on my own because i’m stupid and i drag my friends down aaaaaahhhhh

inner voice: That’s a lie. You solved a challenging pset problem on your own two nights ago

inner voice: And you figured out two whole sections on your physics pset!

inner voice: You’re learning more every day. It feels like you’re not making any progress because you’re comparing yourself within a small time frame. But think about the stuff that you know now but didn’t know when classes started.

me: but i’m not learning fast enough because i’m stupid 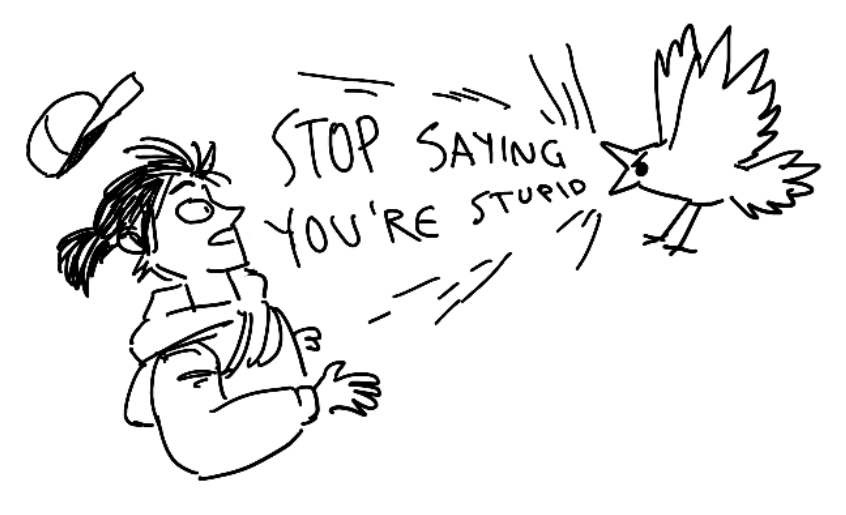 inner voice: Remember that scene from Star Trek: The Next Generation when Data told Captain Picard not to attend his violin concert because he’s been told by his peers that his own violin-playing “lacks soul,” and he didn’t want Picard to see that?

me: And then Dr. Crusher and Picard talked about how he shouldn’t tell everybody his own limitations because it can damage your credibility, and you’ll start to believe in those limitations?

inner voice: You wouldn’t disregard Captain Picard’s advice, would you?

inner voice: Be fair to yourself, man

inner voice: Chin up, keep your head above the water

inner voice: And stop skipping meals for god’s sake. You know that gives you acid reflux