The alarming rate at which the semester flew by shocked me, and I had to sit down and recap:

August holds sad memories, saying goodbye, and the heady ecstasy of MIT materializing out of an abstract dream into a dome-shaped reality in the smoldering heat of the summer.

September holds my traumatic adjustment phase. Determination to push myself further than ever before, in the form of taking five classes in my first semester, to ‘hit the ground running.’ The painful struggle to get through the coursework, the realization that I had to drop a class, and the good sense to drop the right one. The feeling of failure that comes when you’re used to being an over-achiever, and MIT becomes the first place you can’t get exactly what you want.

October? I have no idea what happened in October. That’s how fast it went.

November. I looked up from my p-sets, exams and papers to realise that I actually had a life now. I had somehow found my niche and was growing more comfortable in it daily. I wasn’t just barely hanging on anymore. I also realized that it was REALLY COLD. Like, -5°C cold. The sun now set at half past four. The world as I knew it was no longer the same. My body shut down four hours after sunset, as it was previously conditioned to when the sun set at 7 and I went to bed at 11. Only this time, at eight o’clock, I still had a ton of things to do and I couldn’t just afford to go to bed. Coffee became my new best friend.

Around mid-November, I was waiting to cross Mass Ave when these funny-looking fluffy crystals landed on my jumper. I looked up in confusion to see the heavens glowing white and panicked a little just because I thought this was the end, the sky was falling in, and next would come Angel Gabriel’s horn. Then it hit me. Snow! I was so excited I made my roommate stay up with me past midnight trying (and failing) to build a snowman. I’m sorry, but where I come from, the closest you get to snow is shredded ice in the freezer. It made all the cold worth it. 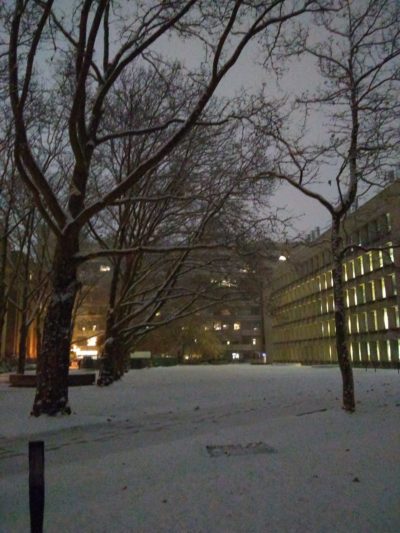 Snowscape between Building 6 and 18

If I could write a book on Freshman Fall, it would probably be called Adjustment is a Process. The subtitle would be Give Yourself Time. The first chapter would be Take It Easy. It really doesn’t matter if other people take six classes or test out of four of the six GIRs. This semester, I took Single Variable Calculus, Classical Mechanics, a writing class and Terrascope. All those are basic entry-level classes, and only two are technical heavy-workload classes. I had started off with an economics class in addition to everything else, and it was too much for me to handle because I had a really weak background in calculus. For other freshmen who were already good at calculus, the Economics class worked out really well. Does it matter that I didn’t do that class this semester? No, because I have seven more chances to take (and pass) it, the only difference being that I can’t do it on P/NR.

I should talk about my writing class, because it was the best class I took this semester. Sometime in June, while in the heat of preparations of coming to school, I had to take a Freshman Essay Evaluation, which is meant to test writing and communication skills for prefrosh. I didn’t do too well and had to take a CI-HW which is a writing-intensive class. I went about choosing a CI-HW in an arbitrarily random way and ended up in one Reading and Writing Autobiographies class. It turned out to be more of a critical thinking and analysis class where we used texts as references to discuss mostly social issues, sometimes scientific, sometimes philosophical. It was a small class, with fifteen students, and we had a small classroom, so we always ended up seated in a circle or similar parabolic shape which felt kind of warm and welcoming. At the risk of sounding partial, I will also mention that we had a fantastic professor who occasionally brought us fruit and dessert.

I hear Elie Wiesel’s Night is a ninth-grade reading piece, but I had no idea this book even existed before we did close reading on it. In groups, we came up with arguments about several issues in the book; religion, family relationships, anything you felt could raise debate and had a point to be made out of. We were practicing coming up with evolved theses; where you don’t necessarily end up with the same argument you began with, but modify it to accommodate complicating evidence and evidence from other sources. It shook me that I hadn’t taken time before to learn about the Holocaust in all its gory detail- all I knew was that it was a war between the Germans and Jews that happened long ago, and was one of the worst forms of human abuse in the history of mankind. Its gravity was totally lost on me, until I read this book, and began getting an idea of what hate crimes were.

We analyzed Maya Angelou’s I Know Why The Caged Bird Sings– a powerful, poignant book, packed with bittersweet emotion. In more cases than I’d like to admit, I had to take some minutes to regain composure before moving on with my reading.

Darkness Visible by William Styron was an enlightening piece we read as a Thanksgiving break assignment. Back home, depression and mental health is not something people talk openly about. I’m not even sure it’s something that’s talked about at all. The excerpt we read from Darkness Visible shed so much light on exactly why it’s important to know about depression, and how to live with or around people with mental health disorders. The author, William Styron, battled with depression himself, and came very, very close to taking his own life while in the throes of the illness. He later made a full recovery and committed his efforts into debunking the mystery of mental illness. His journey was a rough one, and he is very systematic about breaking down the stages of his illness and speculating on what triggered his depression, though he issues a warning against trying to categorize it’s causes, terming the disorder a mystery both to the onlookers and the affected.

Walden by Henry Thoreau was a triggering piece that’s slightly cynical but very contemplative. Thoreau starts by insulting his readers blatantly, criticizing their lifestyles that are spent chasing after wealth and implying that his seniors have nothing of value to add to young people. It’s a deeply philosophical book, and we took some time discussing Thoreau’s theories on the vanity of wealth, and the relevance of the influence of older generations on younger ones. We touched on excerpts from Marcel Proust’s In Search of Lost Time and Salman Rushdie’s The First Blackbird.

Another main takeaway from this semester would be the importance of being impulsive. Just do it! I spontaneously decided to audition for an acapella group- Crossproducts- which turned out to be an amazing decision. I tried out for admission blogging, and I love it. I tried out an interesting-sounding writing class and it ended up being one of the most worthwhile experiences of the semester. Sometimes things worked out really well, and other times I ended up in a class that was way over my current capabilities. Either way, it made for an exciting ride.

Ironically, in spite of getting so busy, I read more books this semester than I did over the entirety of my gap year when I literally had nothing to do. In addition to my class readings, I managed to get through Michelle Obama’s Becoming, Gabrielle Union’s We’re Going To Need More Wine, and Dan Lyon’s Disrupted. Becoming is honestly the most relatable book I’ve ever read, and I highly recommend it. Thanks, Michelle Obama, for releasing this the same semester I’m taking an autobiography class, because it was basically fodder for my term paper. Gabrielle Union’s is a lot more educative in the feminine side of things, if you get what I mean. Both these writers are women I greatly look up to in every aspect of their lives and reading their books is like stepping out of the haze of classes and exams and taking time to look at the bigger picture, why we’re doing what we’re doing. It’s a breath of fresh air. Robert Vunabandi ’20 thinks so, too. To make time for books, I uninstalled Instagram and Facebook- a good idea, except for the fact that I missed out on a lot of memes, and that I regret.

The future doesn’t look too bleak, especially because Class of ’22 still get to take 3 GIRs on P/NR after Freshman Fall thanks to The Bold Experiment.

So long, P/NR Paradise. You shall be missed. 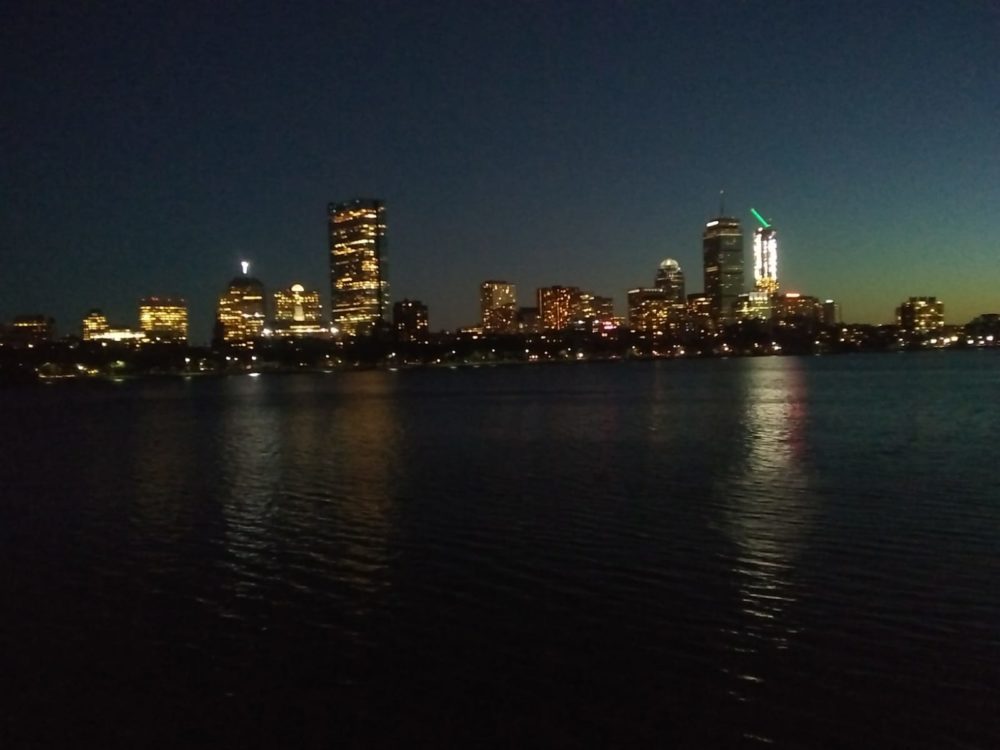 Boston sunset as captured by my sketchy phone camera