My dorm, East Campus, is a space made to be shaped by the people within it. Each floor’s walls are covered with murals painted by residents — and where there aren’t murals, there are blackboards and whiteboards. Unlike the murals, their contents change with the scale of days instead of years, but they often follow a few well-trod paths: lists of classes that floor residents are thinking of taking in the next semester, polls about whatever random topic came to mind, funny quotes taken out of context, scribbled equations from someone’s pset that they needed help with. The boards inside our individual rooms tend to be a bit more utilitarian, still holding lots of scribbled equations, but also to-do lists and schedules and reminders.

This year, as we all try to cobble together what little bits of normalcy and community we can, my housemates and I have produced our own whiteboard traditions. And today (with their permission), I’ll share them with you. 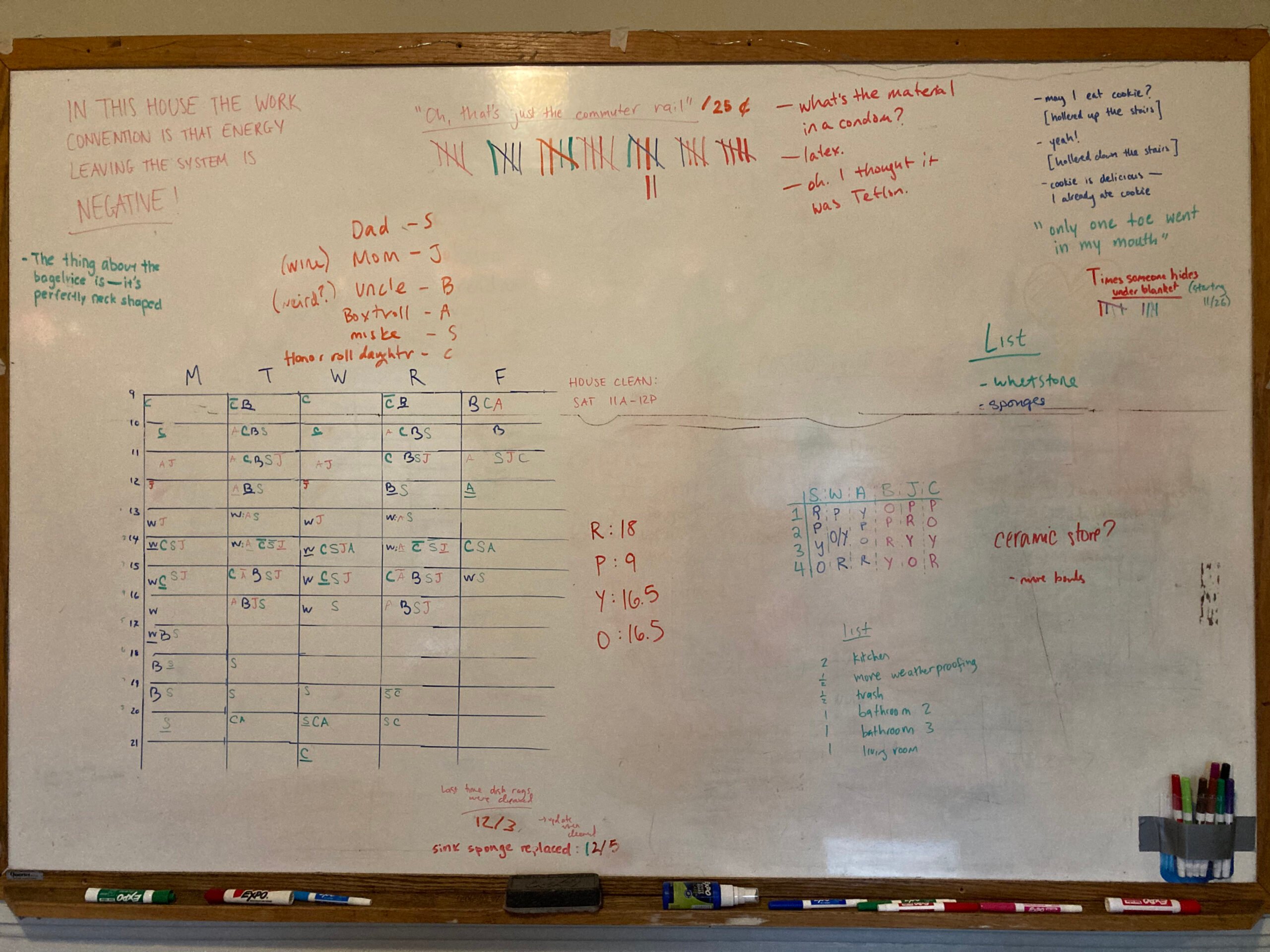 I know, there’s a lot going on here. Explanations forthcoming!

Back when we all lived in East Campus, one of my housemates had a huuuuge whiteboard in her room. When we moved our stuff out in September, she insisted on bringing it. As we hauled that heavy thing down three flights of stairs, we were all like, “OK but where are we even gonna put it? What are we gonna use it for?” It turned out that her room in our apartment had too many windows for it to fit on any wall, so it ended up in the living room, above the couch. We spent about two days teasing her about it…

and then we immediately realized how immensely useful it is. Now, we use this whiteboard for everything. (We’re probably a little too proud of it, honestly.) 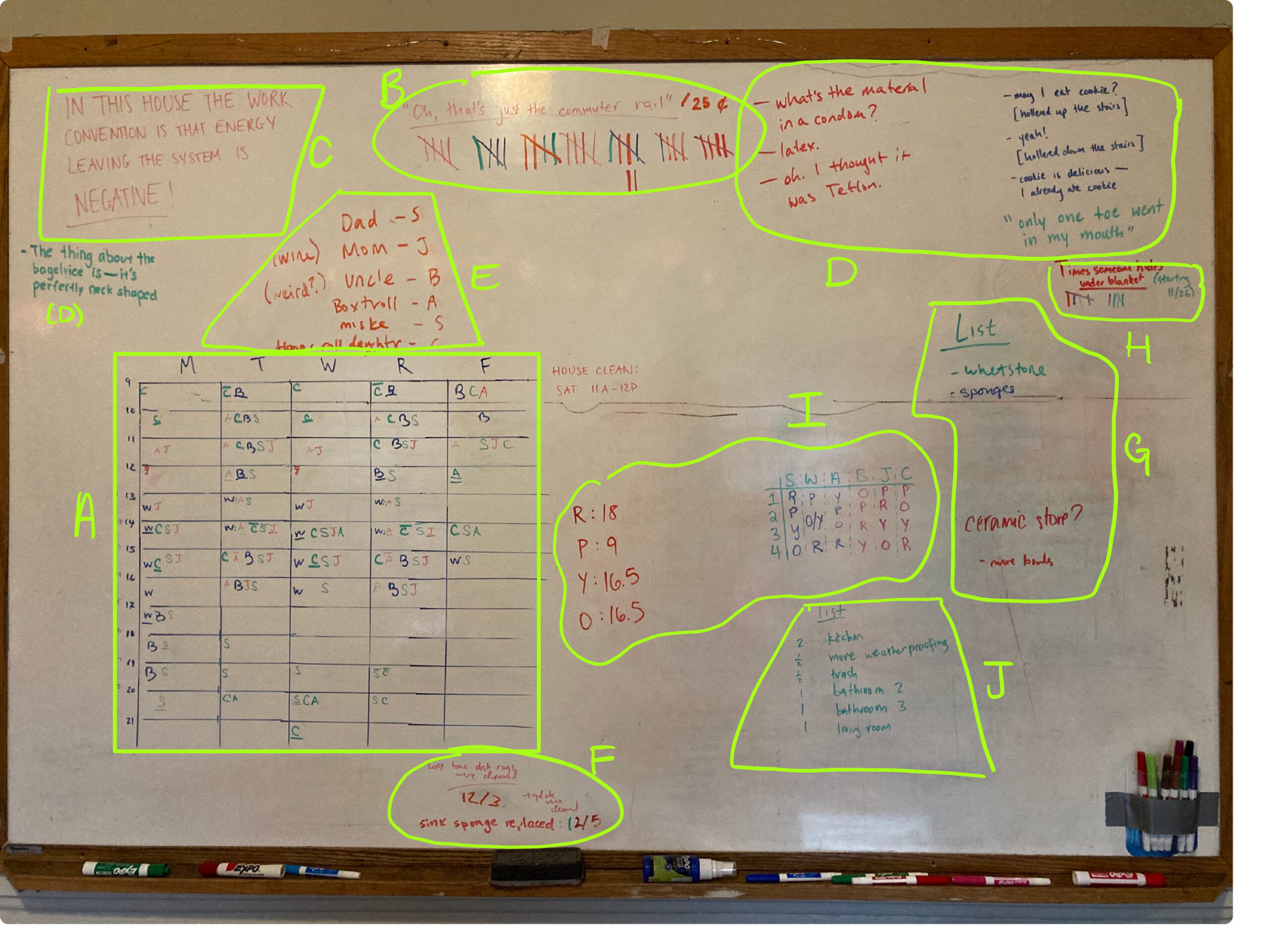 At the very beginning of the year, we drew up a weekly calendar and everyone wrote down the times when they’re busy. We actually haven’t used this as much as I thought we would, I think partially because we can text people to find out what they’re up to, and partially because our busy-ness tends to vary a lot week to week. Nevertheless, it can occasionally be very useful to be able to just glance up and check if anyone is free, or confirm that someone is likely to be around at a certain time. (It’s also kind of cool to look at it as a chart of what times students are the most occupied: you can see that 2-4 pm is the most common time for class or meetings.)

Our apartment is right, and I mean RIGHT, next to the commuter rail. Most of the time it’s not a big deal, but sometimes you’re talking in an important meeting and suddenly it blasts past you… it only took us a few days to realize that we were going to spend the entire year saying “Sorry, I live next to the commuter rail. What I was saying is that…” So we set up a counter! Every tick mark is 25 cents, and at the end of the year, we’re going to have an ice cream party.

Our group of six people has seven majors between us: two 6-3s, a 22, a 12 & 8, a 10 & 21L, and a 2A-3. The latter two, who collectively have forgotten more about thermodynamics than I will ever know, feel very passionately that the course 2⁠01 mechnical engineering tendency to denote energy leaving a system as positive is, shall we say, foolish: I am informed that “literally everyone else” does it the other way. Me, I just think it’s pretty cool how I get to live with a whole bunch of people who know tons of neat stuff that I don’t. ^-^

These quotes are left anonymous for the protection of the speakers. As you can see, we have quite a collection here (not even counting the one I erased that was too R-rated for this post!). A lot of different groups I know on campus collect quotes, and I doubt it’s just an MIT thing; some have a whiteboard, some a mailing list, some a Discord channel. Even just looking at the ones we’ve collected makes me laugh again; I always know a quote truly needs to be preserved on the board when I’m laughing almost too hard to write it.

This is an early attempt at figuring out which roles we would each play if we were a Real Family TM. As you can tell, it devolved quite quickly. For context, boxtrolls are trolls, who wear boxes (surprise!), from a truly excellent stop-motion animated movie. Miske is, uh, a guy we know. (Does he read the blogs? I don’t know! Hi Miske! Sorry!) Miske owns a lot of stuff, and I too own a lot of stuff, and that is why I am Miske. (I am definitively the maximalist in the household. What can I say? No one complains when they need something and I have it 😇)

This keeps a record of the last time our dish towels were washed and our sink sponge was switched out. Boring, I know, but actually the idea of storing that info on the whiteboard blew my mind when one of my housemates came up with it. Anyone can edit it, anyone can see it, and it’s always there to remind you that you should probably have thrown the towels in with your last laundry load! It’s like a house google doc, but better :)

This was a bit bare at the time I took the photo because we’d just done a Costco run. But the premise is pretty simple: if you notice we’re running low on something, you put it on the list. As you can see, this is a pretty all-purpose list, not just for food but for anything we think we should buy for the house. Often, when the list is getting long, we’ll discuss it at our weekly house meetings and decide what we’re getting where and when.

This was a later addition to our counter system, when the weather started to get colder and people started to get hosed and burnt-out. When you walk into the living room thinking about something else, you see the blankets in a pile, you figure you’re alone and sit down… AH! It moved! And it turns out that the blanket pile was, in fact, a human being. That’s when you know it’s time to add a tick mark to the blanket counter. (It’s probably incomplete, though — I’m guessing we didn’t get it started until having this experience several times first.)

This space on the whiteboard is usually reserved for a rotating poll, which then gets filled in as each house member wanders through the living room. In this case, the question was “Rank the four classic Starburst flavors.” On the side, you can see our analysis. We assigned 1 point for a first place ranking, 2 for a second, etc., so that a lower score is better. All I can say is, I live with heathens. I’ve never met a group of people so utterly wrong about Starbursts. But oh well — more reds for me.

Other polls over the semester have included “what kind of keysmasher are you, on the DnD alignment scale” and “plot length of your subject evaluation vs quality of the class”.

Last but not least, there’s our most transient visitor, the to-clean list. We start every house clean on Saturday mornings with this list and assign people to its tasks. Sometimes next to it we’ll also have a list of non-cleaning agenda items (e.g. “Discuss Thanksgiving plans”). After we’ve cleaned everything and met up to talk about whatever needs discussing, the list is erased, banished until another week of dust has been accumulated.

And that’s the board! Well, it as it looked when I took the photo; by now, it’s probably half full with completely different things, which of course is the beauty of a whiteboard. I hope you enjoyed this little tour. I really like how when you see it all laid out, you can kind of read the whole story of our house in between the lines of our writings. :)