i live in an art exhibition

(This is the second half of the Art of East Campus series. The first part can be found here!)

My first and lasting impression of the standard college dorm room can be summed up by this picture. This might be because my formative experiences with college living spaces were from residential summer camps – at every single camp I went to, I was housed in a dorm room that looked something like that picture. I think I entered college subconsciously expecting this from my dorm as well. I didn’t go to CPW, and even though I had prowled the East Campus website extensively and seen pictures of its interior, the magnitude of how different EC is from normal college dorms didn’t fully hit me until I walked in for the first time.

For those of you who have visited East Campus might know, the walls of all ten halls here are almost entirely covered with murals painted by students over the years. Some of these murals have long and storied histories, while some of them were probably painted last month. Some of them are beautiful, detailed paintings of landscapes, while others are abstract to the point of meaninglessness. Many are of album covers, fictional characters, and memes. There are hundreds of murals, and while they’re all very different, they all have special meanings to the hall they were painted on as well as to the dorm as a whole.

East Campus residents weren’t always allowed to paint their walls, however – there’s an origin story that’s been passed down to generations of EC residents. It all started on floor 5E (more commonly known as Florey…sound familiar, prefrosh?), their dragon mural, and a section of their hallway called Black Bemis. 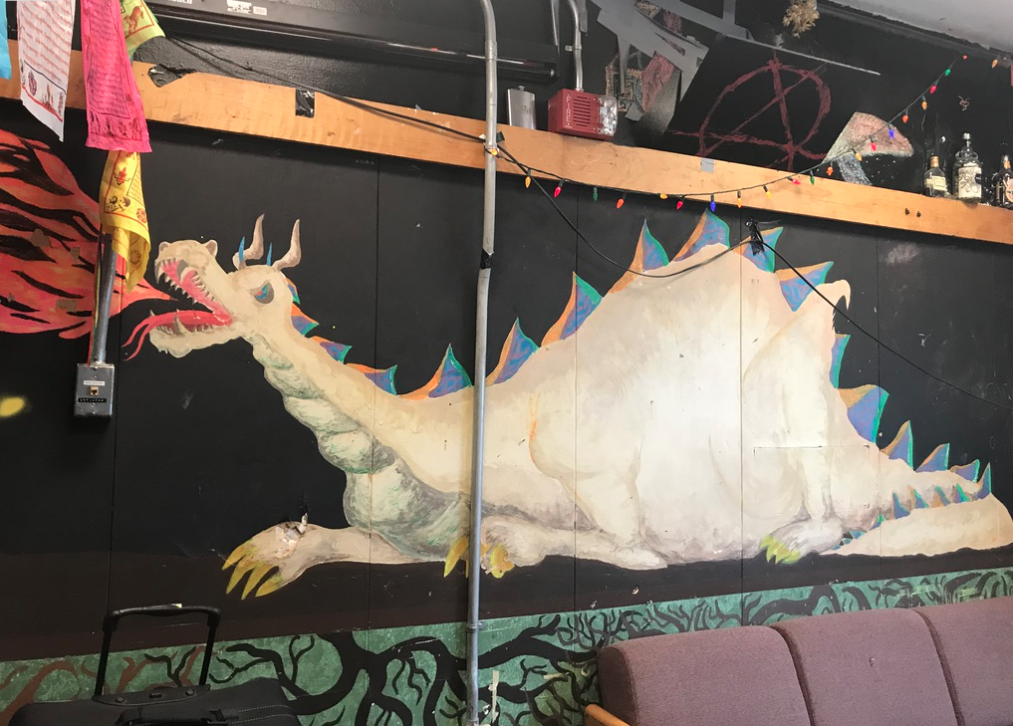 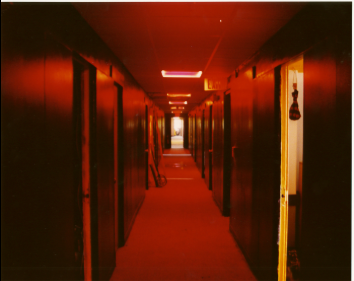 As you can see, Black Bemis is so called because the walls are painted black and the lights are either off or covered. The dragon mural is reportedly the oldest mural in East Campus, and according to legend, it was originally only visible under a blacklight. I’ll go over the true version of this story after, but here’s the legend of how murals in EC came to be, as told to me by Maya K. ‘19.

“So the whole black-light dragon fiasco happened: 5E had a dragon in black light paint so facilities wouldn’t see it and paint over.

But they wanted more; don’t we all?

They knew that the slightest hint of graffiti on the walls, and facilities would be quick to cover it back up with a solid color.

Well, white isn’t the only solid color…And black would be awfully hard to cover up. They decided to make a statement with this, so one day, if you went up to 5E you’d see tens of residents, painting bemis entirely black, to signify the darkness in their souls.

Facilities came in the next day, and decided it had to go, so they set to work repainting it white.

There’s a little issue with white paint over black paint. Mainly that it takes seven coats of white paint to cover one coat of black paint. Coat after coat, it took the four or so guys from facilities the whole day.

…and as soon as it dried, the residents repainted it black, with one coat of paint, in maybe an hour, while they chatted and did problem sets, and derped around.

This happened three or four times before facilities decided they had better things to do than cover up black paint, and when the murals started going up, they were just resigned to it.”

As it happens, this story is actually pretty close to the truth. Tesla W. ‘20, East Campus president and Florey resident, emailed out to the alumni who originally painted the mural and Black Bemis. According to them, the dragon mural was painted between 1969 and 1972; the colors were television phosphors obtained from an auction that were mixed with varnish. True to legend, it was barely visible under normal lighting but quite visible under ultraviolet lighting. Black Bemis was also first painted in ‘69, and the fight between facilities and residents went back and forth for a few years, reportedly until 1972. After that, it seems that facilities gave up, and Black Bemis remained black from that point onwards. Other murals began springing up as well, and at that point, facilities perhaps realized that there was nothing they could do about it.

I think that this is a pretty cool piece of East Campus history, and it really speaks to the spirit of this dorm. To quote Tesla W. ‘20 here, “I’m not sure what lesson is to be learned from that story, but I’m weirdly proud of it.”

I figured that people probably have a lot of opinions on the murals in their living spaces, so somewhat similarly to the first post in this series, I sent out a poll asking people for their favorite murals (including the ones that may be inside their rooms). These were the responses!

“I think this is a self-plug, but there’s a lego mural in Hayden 5W that I made last year. It took about three months and is made almost entirely from a personal collection I’ve accrued over my entire life. It’s of a big rainbow cat, and I’ve thrown in a few Easter eggs for the astute observer (my favorite is a white picket fence as part of a whisker). I didn’t want to just redo an image in a pixel-art lego portrait. I wanted it to have texture and character like an actual cat and took care in the three-dimensional texturing and topology of the mural. I like when people interact with it (in non-destructive ways). It’s fun to run your hand over it!” – Mauri D. ’20 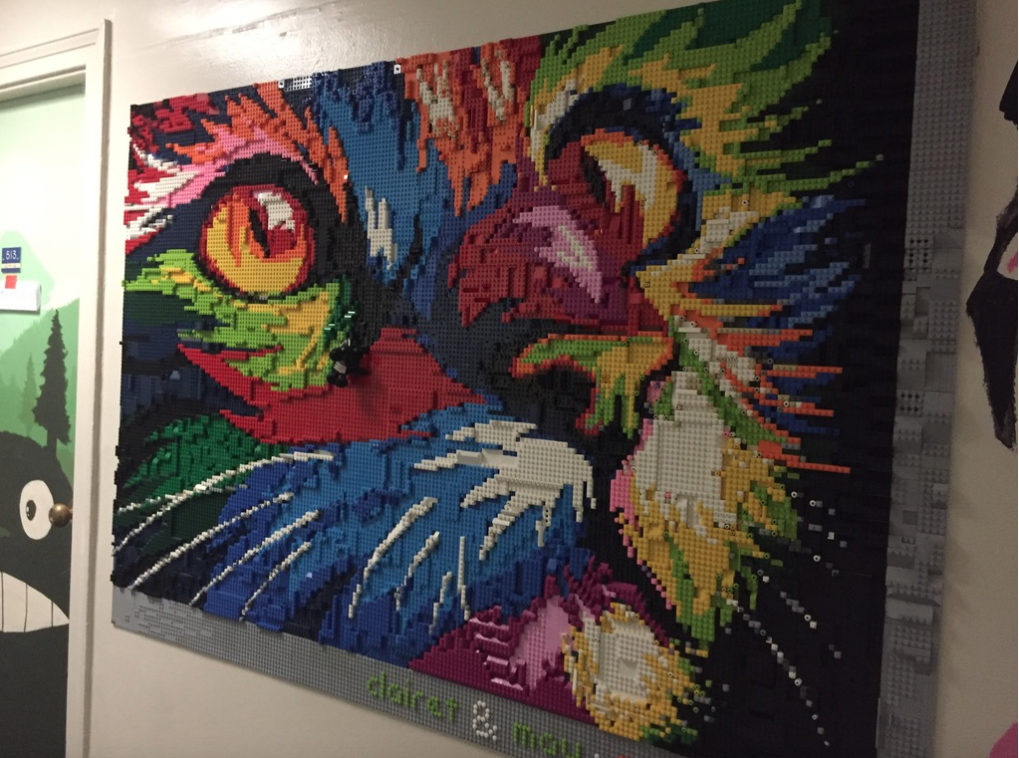 “Have A ___ Day mural in 3W Munroe – superficially because it has a lot of good puns, but I also think it’s nice because it’s a collaborative mural – Supposedly it was a hall rush event (many years ago), so many people contributed.” – Anonymous 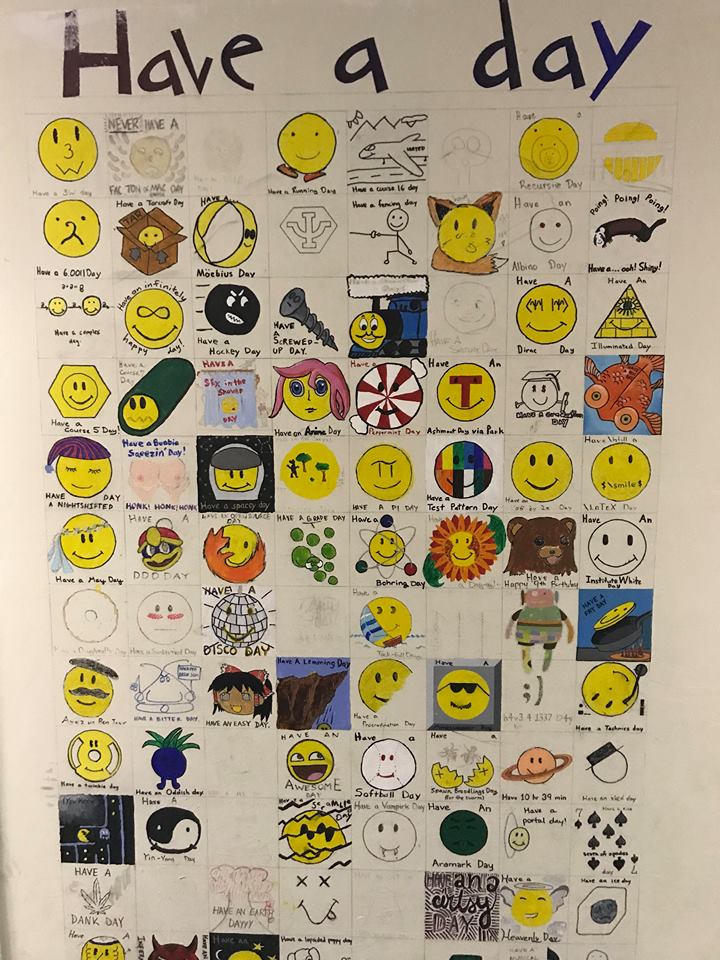 “There’s one on Tetazoo: “that’s… / Don’t care! Blowing it up!”: It was made by a senior my freshman year, so it’s special for that reason. Opposite it is a face from “Attack on Titan” because we have a hole in the wall, so someone painted the face inside! (hahahahahahaha!) We love our holes on Tetazoo and we take good care of them… Don’t you dare try to patch the holes.” – Maya K. ’19 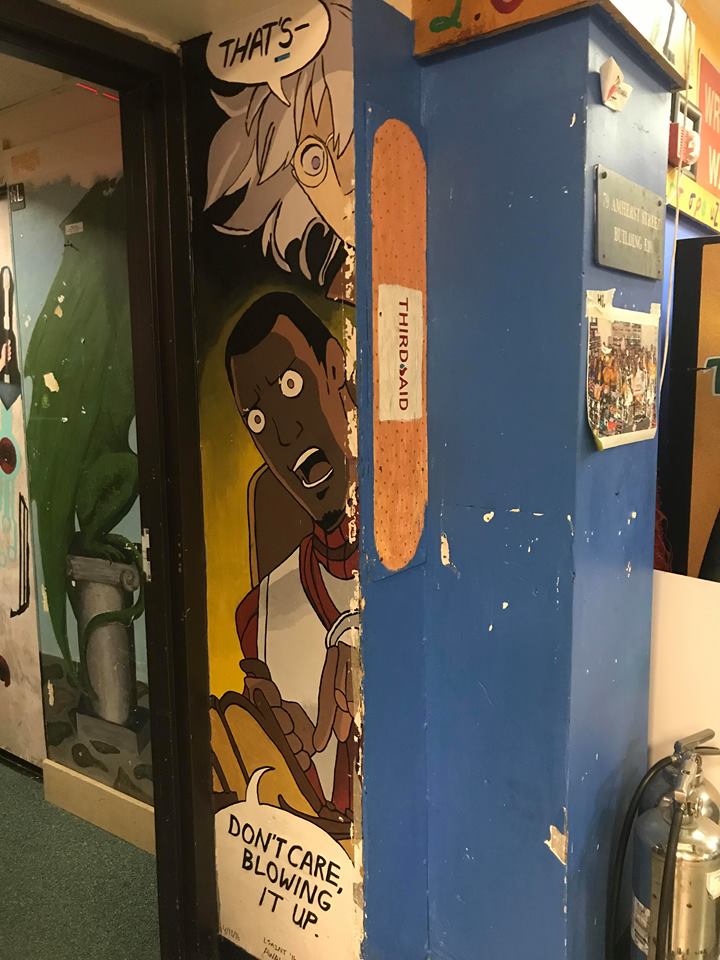 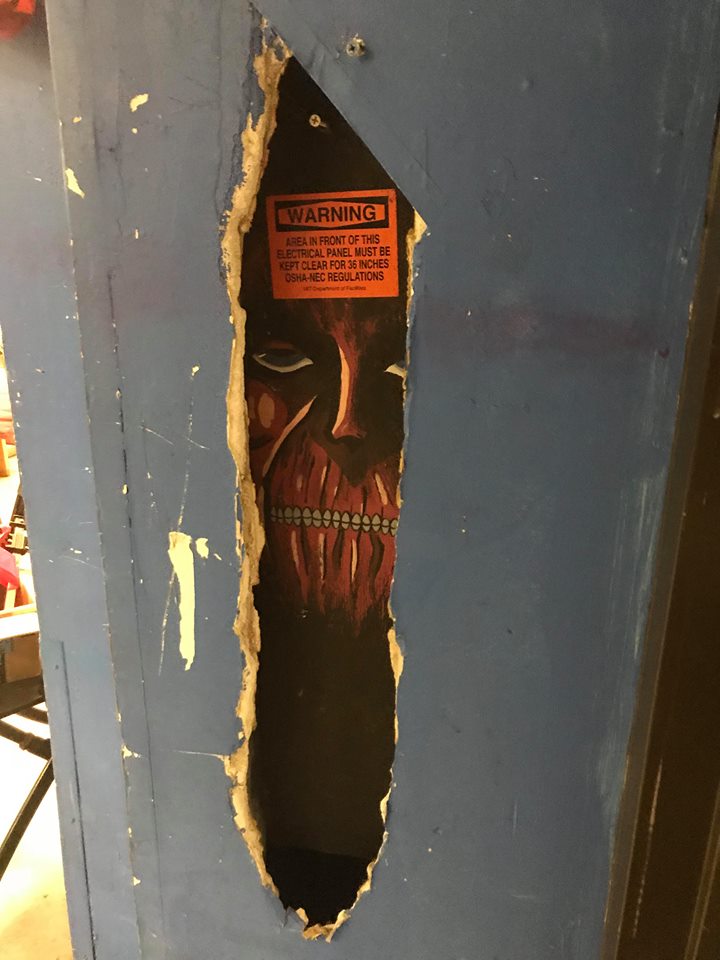 “Deadpool making a billion pancakes on Tetazoo. It was right next to my first room so I saw it every morning and beyond being just well done artistically, it reminds me of Tetazoo’s traditions like “pancakes,” or making baked goods with hall supplies free to all residents. [Also], the ambitious crossover between the Squanch and the Dark Side of the Moon album cover. It’s an ingenious idea, and Pink Floyd and Tetazoo are two of my favorites things so of course it’s a great mural! Fun game: count how many Dark Side of the Moon album covers you can find in East Campus. Hint: The highest concentration is on Fifth East.” – Jade F. ’21 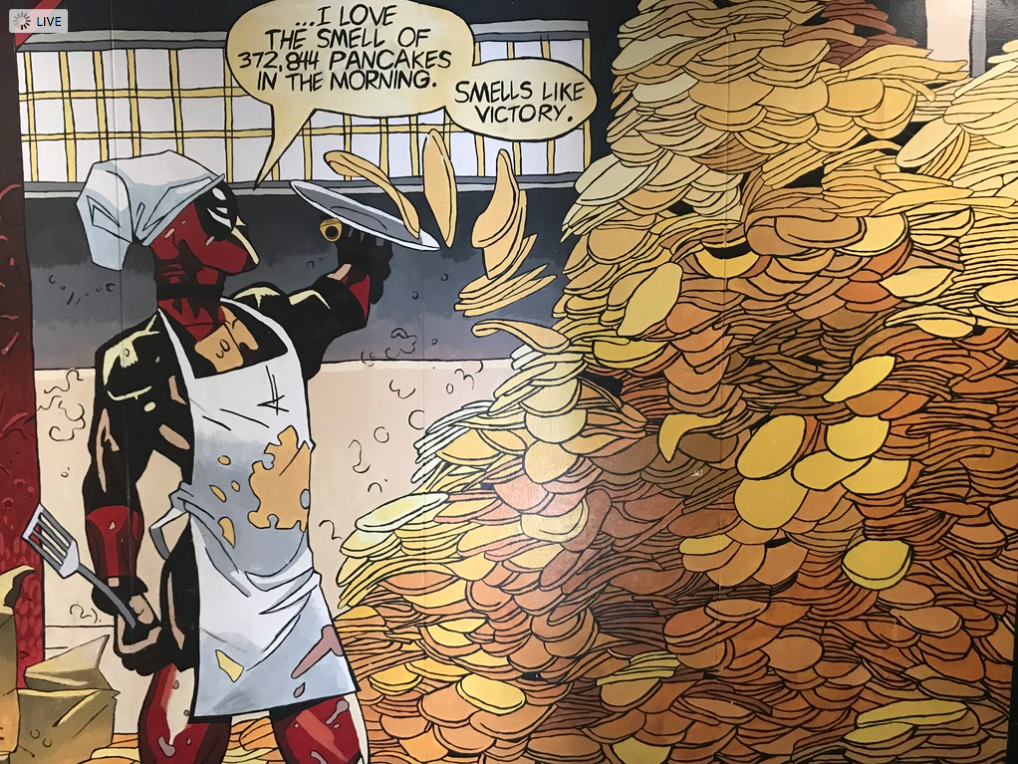 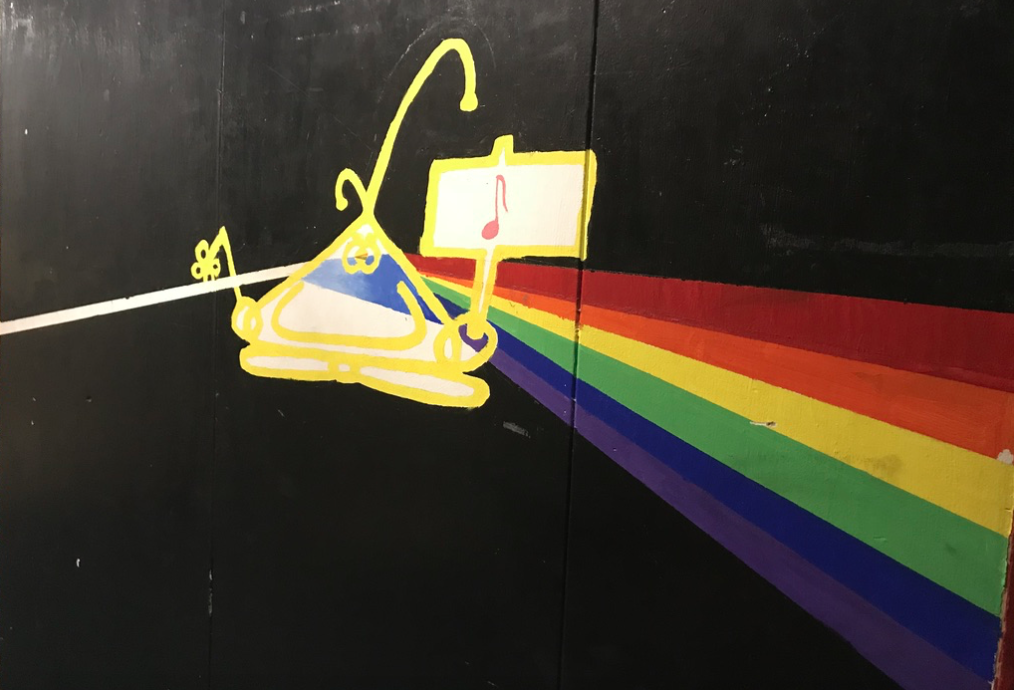 “Last summer, my family was going through a bit of upheaval so my little sister flew out to Boston and stayed with me for a few months. She’s now at college studying digital art, but she really loves painting – so while she was here for that summer, she painted my entire room.

My content request was “city, flowers, the rest is up to you.” And this is what she came up with! It’s a street in Bonn, Germany, known for having gorgeous cherry blossom blooms every year. She claims to have chosen pink flowers so that the room would be just as bright as my notably pink hair.

I love that she was able to find such a good outlet that summer, and that by living at EC I’m able to make my room a space that isn’t just ‘my own’, but that actually means something to both me and her. And, of course, I love that I was able to sleep under a canopy of beautiful cherry blossoms this past year.” – Max B. ’20 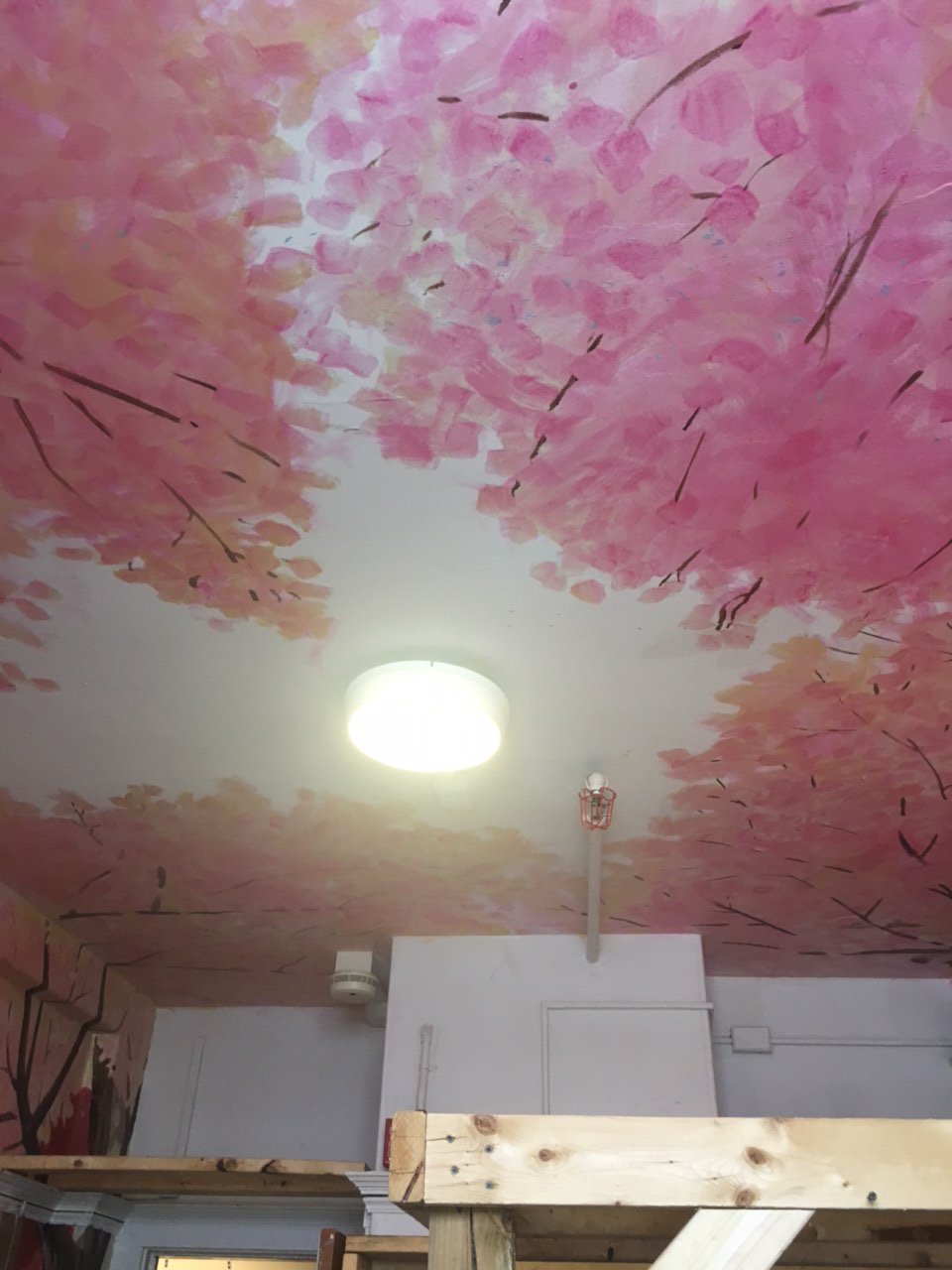 “On Tetazoo, there’s a big painting of Hobbes (from Calvin and Hobbes) making his classic mischievous scowl. I love Calvin and Hobbes, and I think the mural really captures Tetazoo’s determination to have fun.” – Kate C. ’18 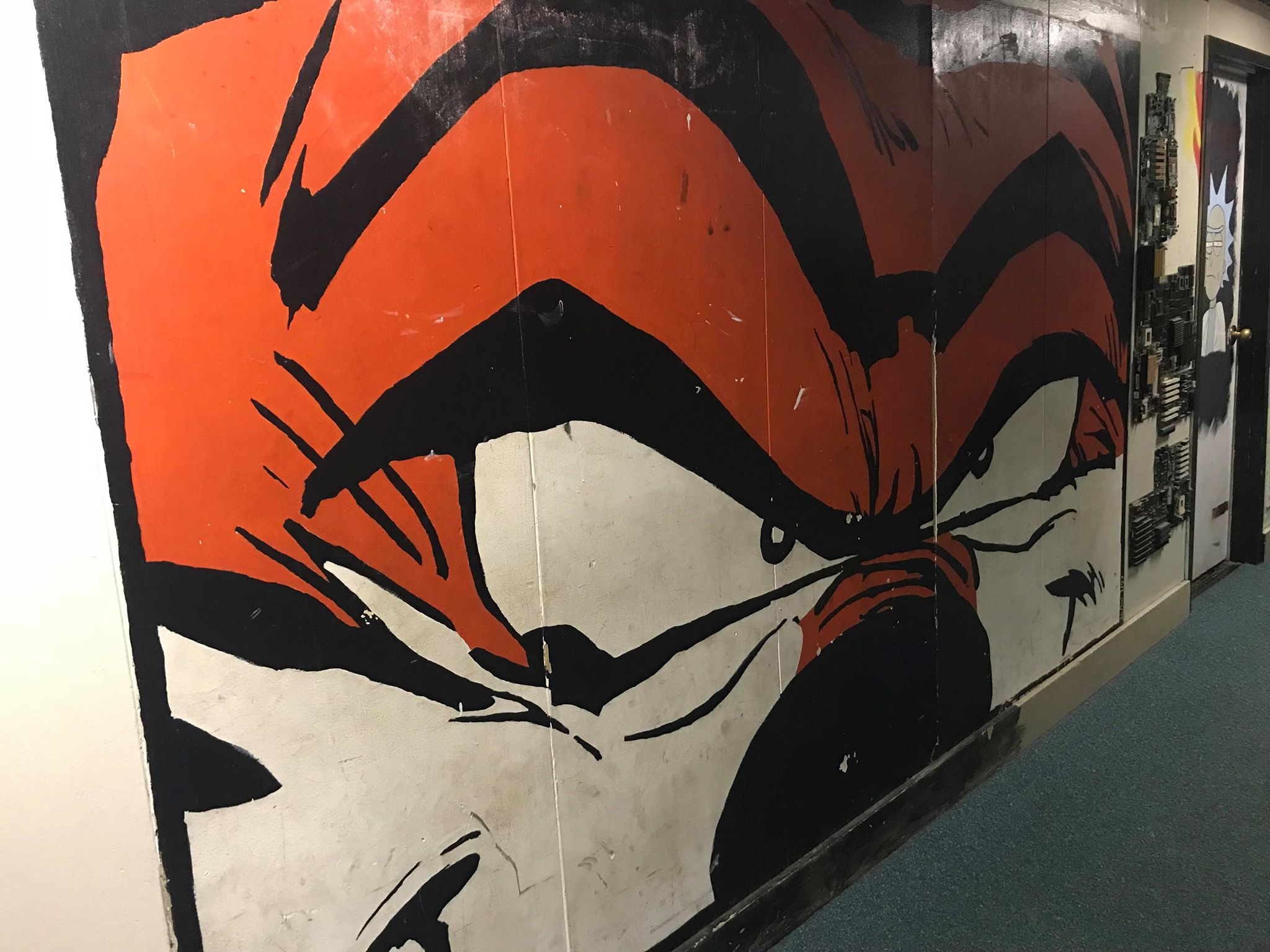 “On 5e there is a Neon replica of Picasso’s Guernica in Goodale. The blacklights for it are currently broken but its really something to look at. Its also directly across from an extensive Pink Floyd, Brick in the Wall mural. The hallway is overall just ++.” – Tesla W. ’20 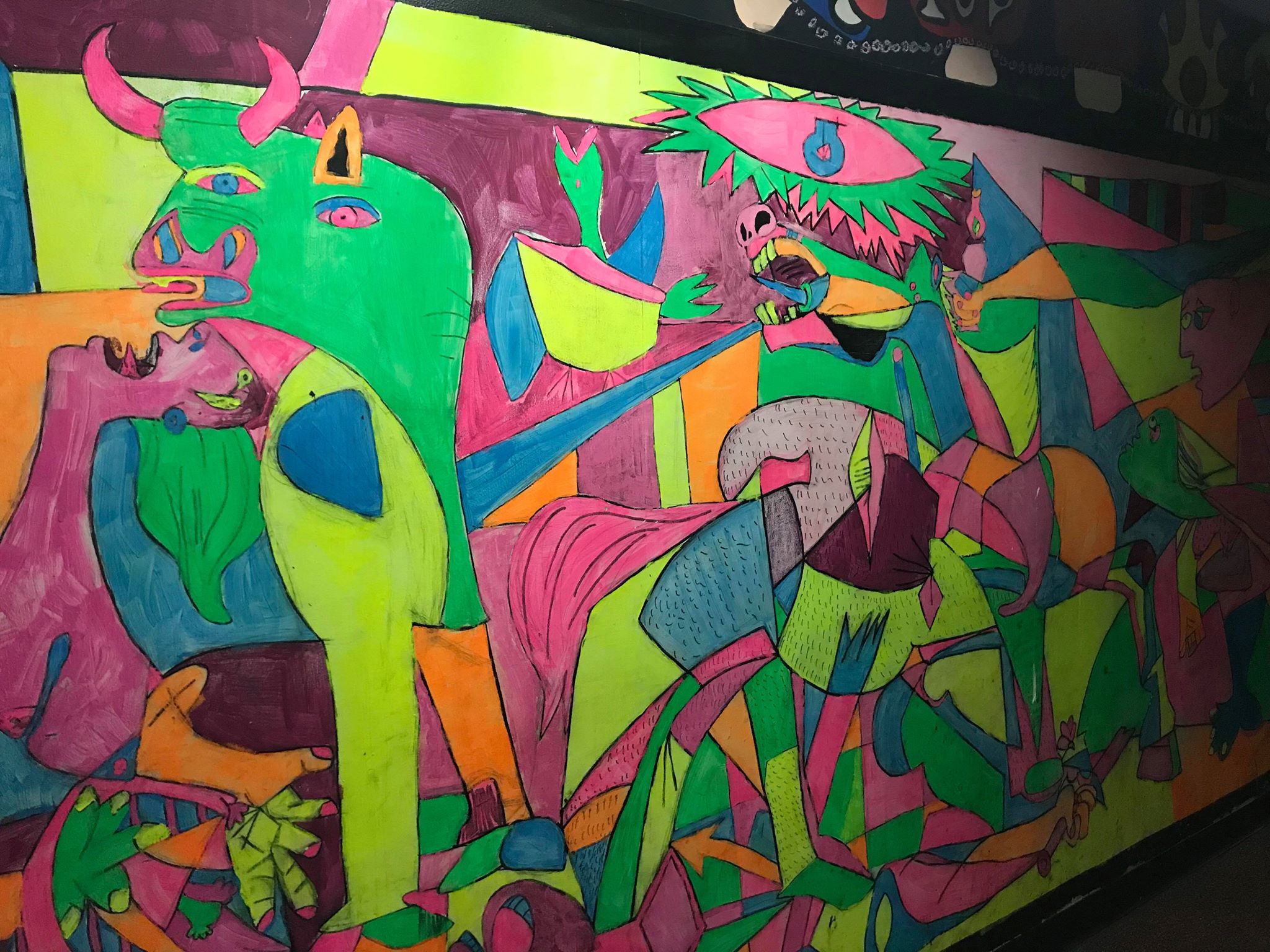 (I couldn’t find a way to edit this photo so that it looks like it’s under a blacklight, but trust me, it looks really cool!) 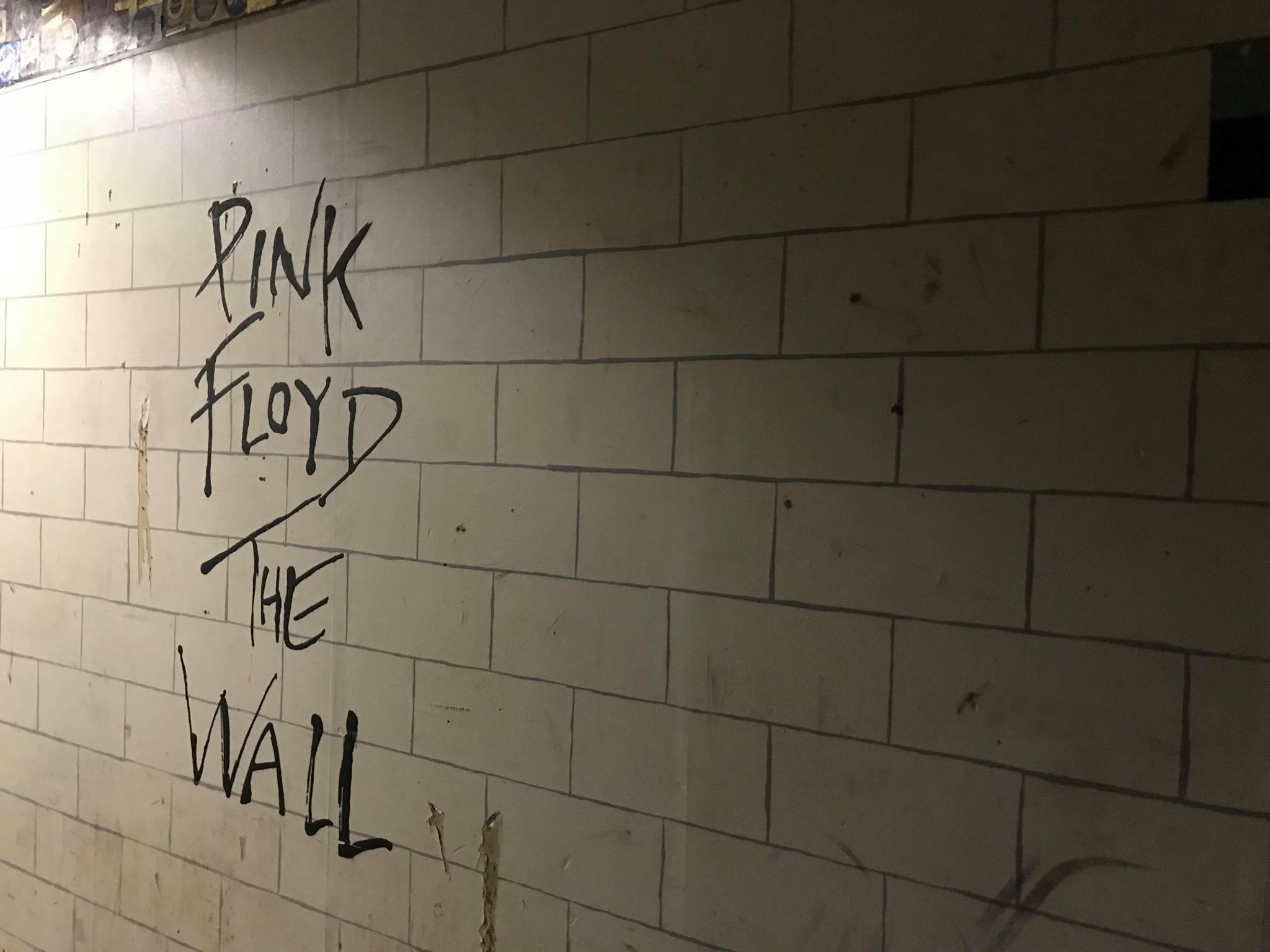 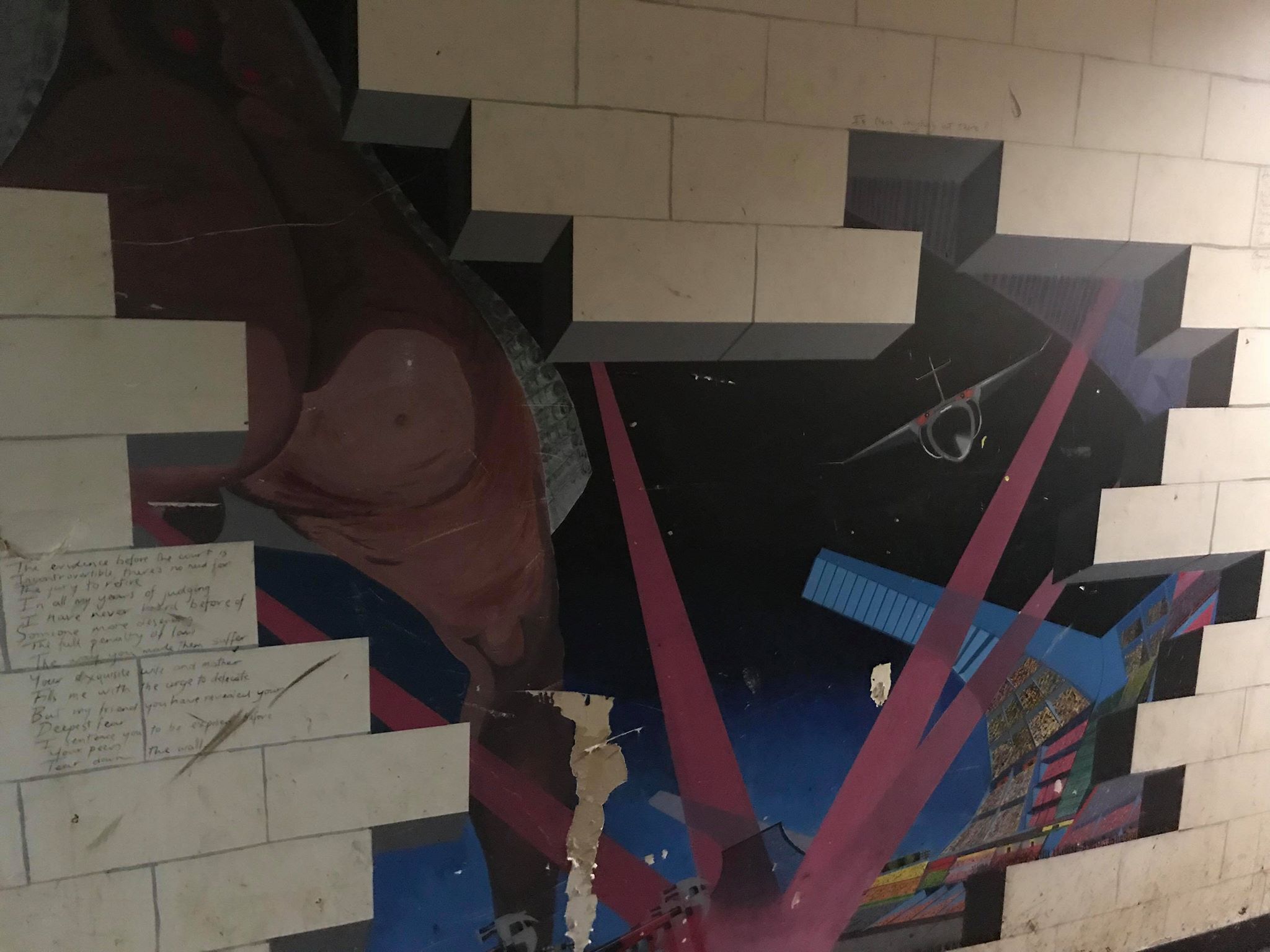 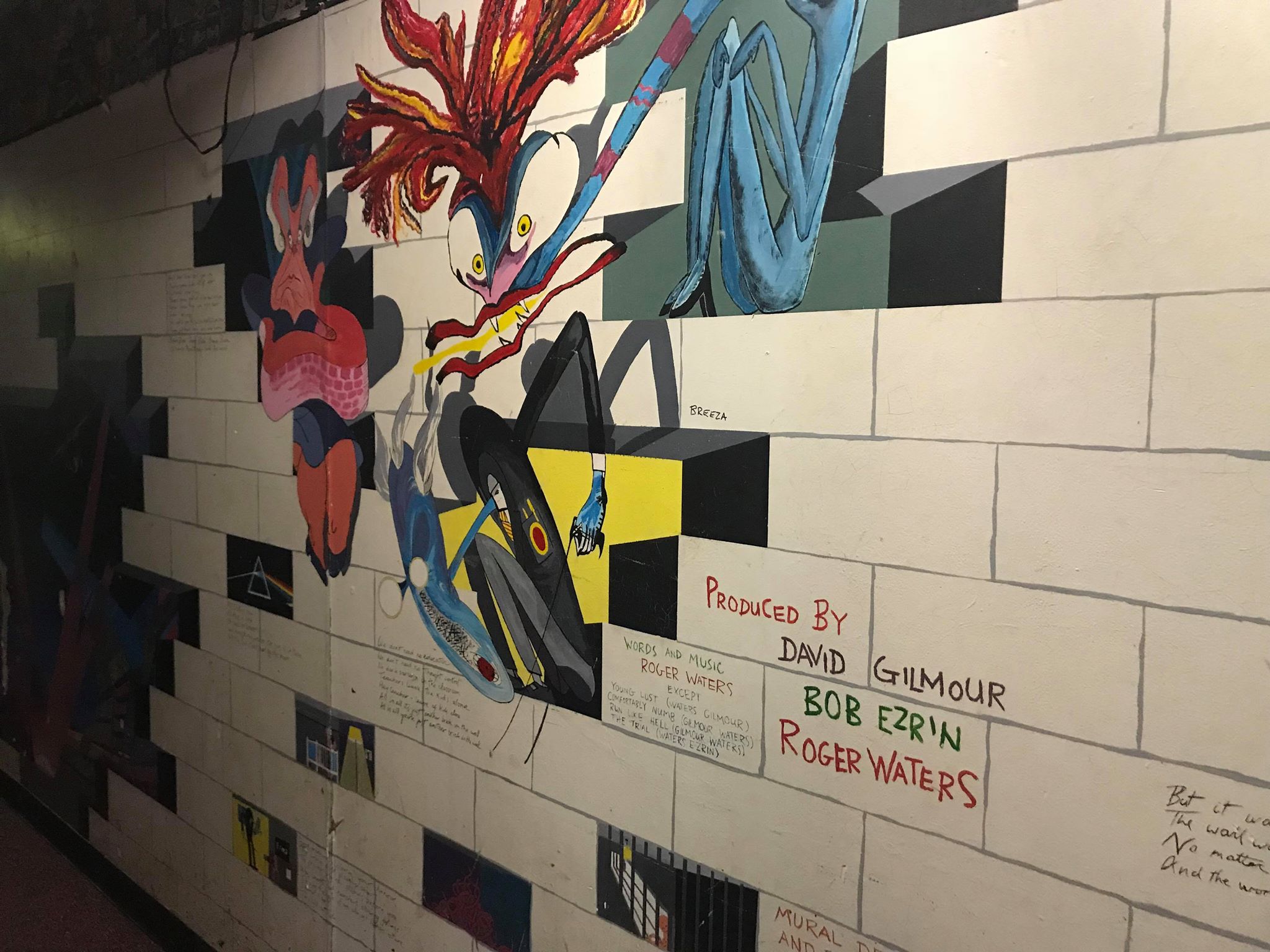 (phew, that one was pretty extensive)

Tesla also said this about the mural they painted in their own room: “I made this mural in my MIT dorm room last semester and hadnt even had time to photograph it properly until today. Its inspired by a piece–which I think is called “Leave Your Sleep”–by @emil.underbjerg. The original is not about ADD (or even mental health as far as I know) but the piece struck a chord with me. Often, especially when I havent worked out, it feels like I have this outward expanding pressure in my skull…As if cognitive energy is streaming out of my scalp and into the room around me and I cant capture it. Grappling with this had been particularly difficult when I fenced in highschool, but hadnt challenged my academica until these last three semesters as my schedule and classes have demanded more focus for longer periods of time. I hope people find some kind of beauty in the image’s juxtaposition of struggle and peace.” 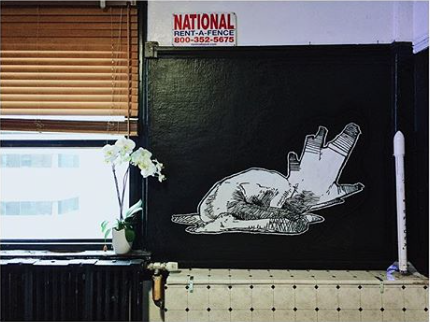 “I made a mural in the room I lived in this past year that is a wall completely filled by handprints in a variety of bright colors. I love this mural because it was a collaborative project, and it shows. As I was making it, I left my door open and asked anyone who walked by to come in, dip their hands in paint, and put a set of prints on the wall. The wall ended up with a collection of about 15 different people’s hands. It looks great aesthetically, but the process by which it was made is why it is my favorite. From afar it looks like a nice colorful wall of hands, but upon closer inspection you can actually notice the variety of hand shapes and sizes that clearly mark this wall as a group effort. This piece of art that came about as an unplanned collaboration speaks to the spirit of EC–it shows both togetherness and uniqueness.” – Danielle H. ’21 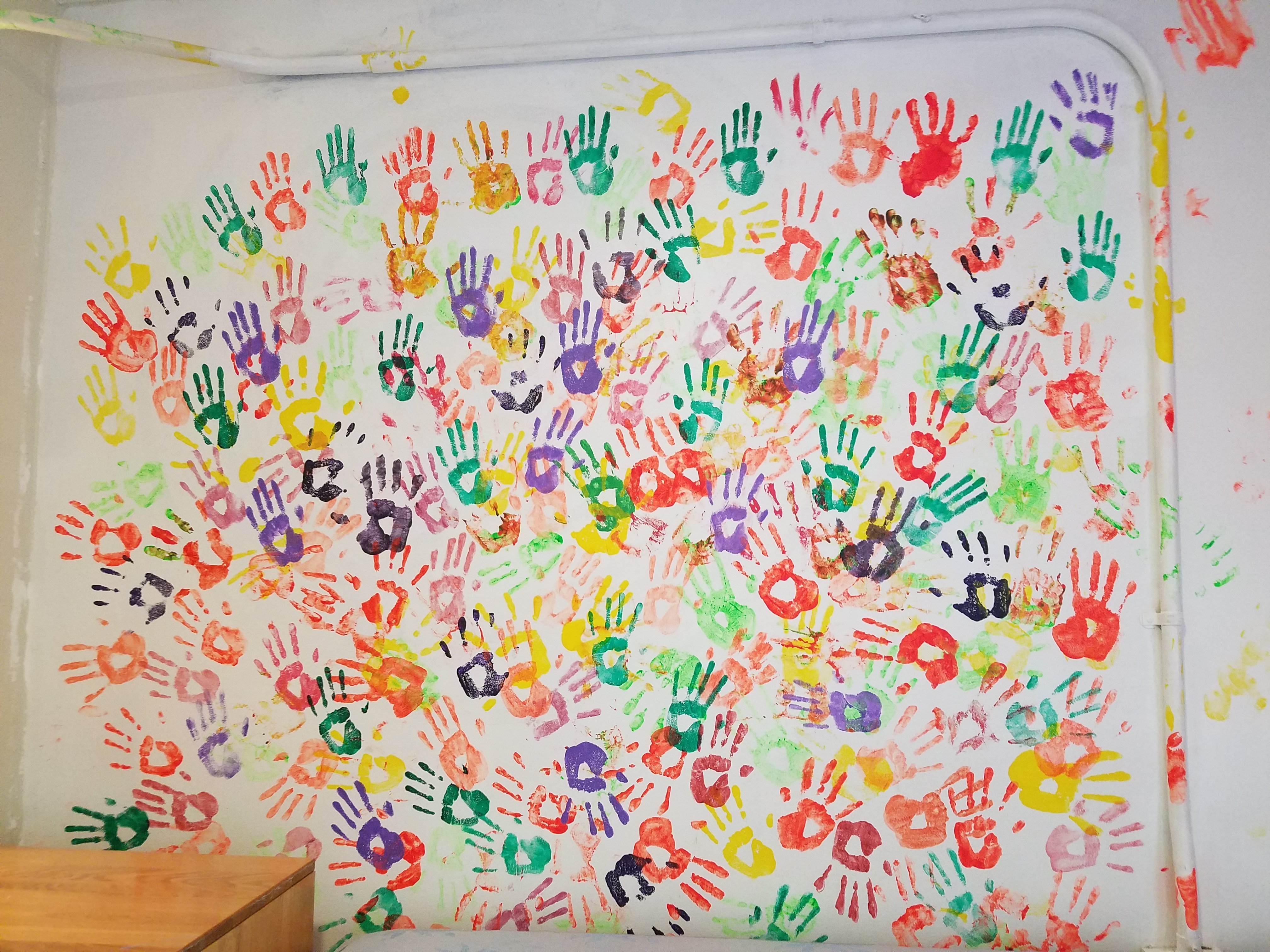 I’m going to sign off this series with one of my favorite pieces of wall art in EC. I think this perhaps sums up the spirit of my dorm in the most succinct way possible, and every time I walk past it on the way to do my laundry, I’m reminded of why I love this weird, unique place and all of the people who call it their home. I hope you enjoyed joining me on this tour through the halls of East Campus! 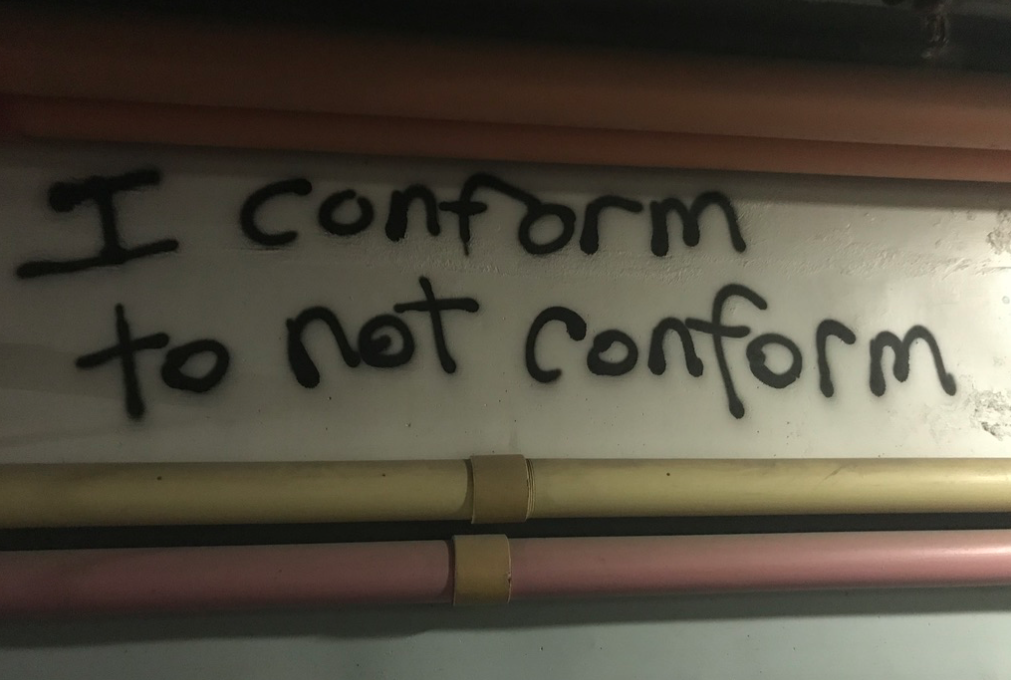