a surprisingly hard question to answer

A few weeks ago, in a true callback to our high school days, Paolo and I were Protobowling feverishly. For those of you who weren’t quiz bowlers in high school, Protobowl is the website that trivia nerds use to practice for competitions. And while Paolo and I would definitely just play on this website apropos of nothing, we were in fact practicing for a real reason – college Jeopardy auditions.

College Jeopardy requires a surprisingly large pool of obscure and random knowledge, and even more surprisingly, I actually had possessed a large amount of this knowledge in high school, both through learning it in classes and practicing for quiz bowl. But through four-ish years of MIT, most of this knowledge has sadly evacuated my brain. Every question I missed in Protobowling with Paolo was a reminder of how much I had forgotten since coming to MIT.

Around this time, I had a conversation with a mutual friend of both Paolo and I that went something like this: 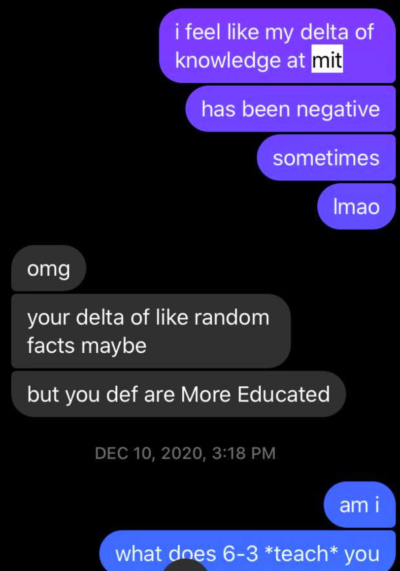 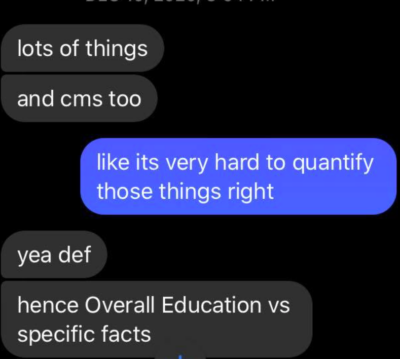 It feels like I’ve forgotten a lot of things since coming to MIT, which really makes me wonder what the space that knowledge vacated is now filled with. I’m no longer a decent quizbowler; I am objectively much worse at reading, writing, and speaking Japanese than I was three years ago. I definitely couldn’t solve a single math problem that I was capable of doing in the tenth grade. These were things that I prided myself in the most before coming to college. Maybe it’s wrong to want to quantify the knowledge that I gained from MIT, because it’s possible that this isn’t what learning actually is. But when I look back at the Courseroad of all the classes I took at MIT, it’s hard to pick out a large list of things that I can recall having learned from those classes, and that feels…frustrating, for some reason.

Growing up, the nature of knowing things was fairly simple. I either knew how to solve a certain type of problem or I didn’t. I either knew this particular bit of trivia or I didn’t. There were competencies to meet and competitions to improve at over the course of time. I had binders and notebooks filled with studious notes on biology and chemistry concepts that I would carefully memorize for tests.

Then I got thrown into the dunk tank of MIT freshman year, and trying to remember what I wanted to learn freshman year, or what I learned at all, is remarkably difficult. And although sometimes I flip through my old notes⁠01 except the ones from freshman fall, pretty sure i literally burned those...oops from some of the first classes I took here, and feel flashes of recognition as the concepts vaguely take shape in my mind, but some of them still seem beyond my grasp.

What is learning? What did I learn here? It feels like there’s a cloud of information in my brain that’s impossible to touch, but will suddenly materialize when I need it to. But sitting here, writing this blog post, and trying to name what exactly I gained from MIT is **much harder than I thought it would be.

I’m not sure if this is a common sentiment. Some part of me feels like it might be, because I saw this confession and people resonating with it pretty recently.

this is so relatable

But sometimes, I also look at my friends who are physicists or mechanical engineers, and watch them solving insane multivariable differentials like it’s nothing, or building an entire thing just from scratch, and I start to wonder if I’ve really just forgotten everything I’ve ever learned, or if it’ll present itself in a different way.

I do think one thing that MIT has provided me with is a broadened scope of my chosen field. I know a lot more things about computer science now. It’s sort of like I have a toolbox and I know there are a bunch of tools in it; I would be able to select the correct tool to solve a complicated problem from it, but I might have to search the manual for how to use the tool. I suppose this is also learning, but it feels…different.

I am also objectively a lot better prepared to be a working adult in a software or a research position. I have learned a lot about how to do work, how to use different programming languages and IDEs and tools, and how to convey my ideas succinctly and thoughtfully, but it still feels like I don’t enough to solve complicated problems. I chickened out of – or did poorly – in most of the very computational classes here, which is maybe why I feel this way.

I don’t feel smarter after going here, although I know that I objectively am. I think that I thought that after graduating, I’d know everything there was to know about my field. I would be an expert that people could turn to to ask complicated, high-level questions. But I don’t feel like that person. I think the only thing I know now is that I know very little, and that MIT was almost just a taste test.

Maybe this is what learning actually is – the more you know, the less you know. Maybe I’m just trying to console myself. I’m not sure. All I can say now is that I graduated from MIT, and that means something – unfortunately, I can’t go back in time and compare brains with my freshman year self to find out what that something actually means.

One thing I wish I had done was make a list of things that I wanted to learn about through my coursework. Honestly, I probably wouldn’t have known enough just to know what to list, but I wish that I had regardless, so I could look back on it now and hopefully be able to marvel at how little I knew three years ago.

For now, though, I guess I’ll just have to assume that I have learned a lot at MIT, even if in my heart, it feels like I didn’t learn nearly enough as I should have. The MIT experience is, in the end, somewhat intangible, and I got my fair share of it. This is a somewhat rambling post that doesn’t really come to any conclusions, but I think that I do feel a little better than I did when I started.