to a new school year and adventure

When I was younger and went to Disneyland weekly,⁠01 Yes, weekly. My family had an annual pass since we lived close to Anaheim and it was cheap at the time so to entertain my three year old self and my cousins, our parents would let us run amok at Disneyland. one of my favorite rides was the Disneyland Railroad. The Disneyland Railroad was hardly a ride at all, at least in the traditional amusement park sense of it. It was simply a train that wrapped around Disneyland to help weary guests with tired feet navigate the large park. 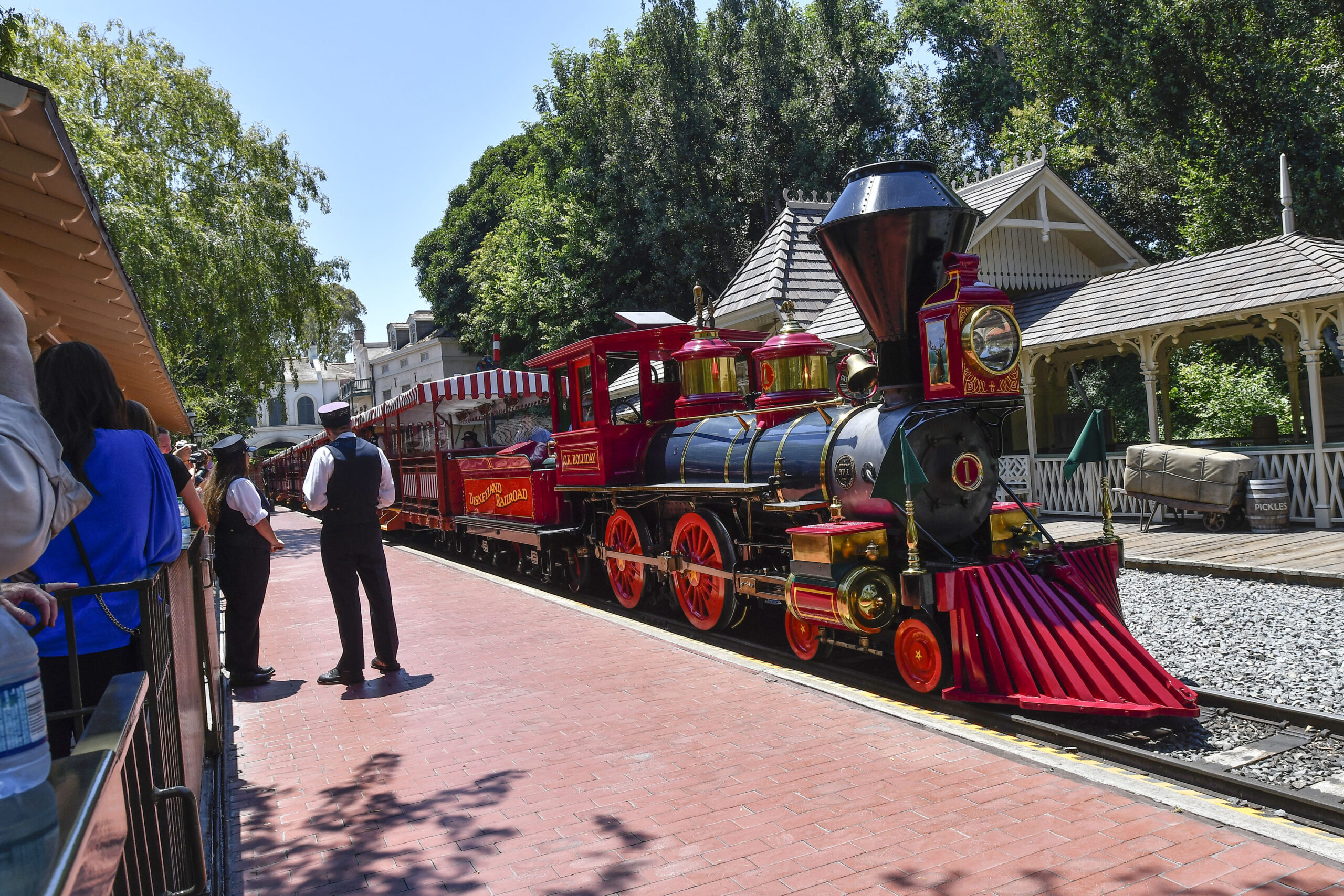 To make the ride less boring, though, they put dioramas in the tunnels as you chugged along, like a dinosaur diorama showcasing all kinds of prehistoric beasts, and the Grand Canyon. (Which was kind of random?)

There was something about the simple train ride that made my four year old self extremely  giddy and content. My mom was amused, too, since I was so enthralled by one of the most boring attractions at the park. At first, it was a relief, but I think after some time she was sick of seeing the same three dioramas every single ride. (There were some days where I’d refuse to get off the train and insist on going around the loop three or four times.)

I forgot about this anecdote until very recently, when I was on the T on my way to MIT. I was filled with that very same childish giddiness, as I watched the dark, albeit diorama-less, tunnels pass by as I waited to make my transfer to the red line on Park Street.

Being back in Cambridge, in general, makes me nearly vibrate with anticipation. Excitement. Although I lived in Somerville in fall 2020, it barely felt like I was living in Massachusetts since we rarely left the apartment. It was the same four walls and three rooms every day.

But now, as I walk around aimlessly through Newbury Street, or prance down the Infinite like a fool, I feel at peace again. I feel safe. I feel at home.

The pandemic has taken a lot away from me, from many people, and while the situation has barely even started to improve, I’m remaining cautiously hopeful and optimistic for what is to come.

Yesterday, I visited some friends on campus, coming back home into my ex-home, Random Hall. It was incredibly…bittersweet walking through the creaky building again. As I smelled the somewhat odd scents of Random and took it all in again, I felt a bit wistful.

There was a part of me that resented DPhiE for forcing me to move into the house. But there was another part of me that knew that forcing myself out of my comfort zone is the best way to grow, and that I shouldn’t cling on to Random anymore.

As I made my way up the steps to the second floor, Loop, the floor where so many memories were made, I hesitated. It had been two years since I had been back in Loop, a hall I had lived in for a semester and a half. It was where we made some of our wackiest, craziest memories, like staying up until 5 am to finish a puzzle. Or watching a movie every night of freshman fall. It’s where I saw Inception for the first time and The Prestige. It’s where we all watched Parasite for the first time and screamed in horror at the plot twist. It’s where we cut up a durian and gave it to all of Random and Loop smelled like durian for a whole week. It’s where I cuddled with Michaye’s cat, Zella, after I failed my first MIT exams, where Mariia’s friends came to visit and stay with us as guests while they toured Boston. Every inch of that hall had a memory attached to it, and entering would cause all of that to flood back. To make me remember what could’ve been, had Spring 2020 just been a normal semester.

And as I stepped through the door into Loop-side kitchen, I immediately felt the urge to cry. Everything was exactly as we had left it, although a bit cleaner than before. There was still chalk of Mariia and I’s snail names (snariia and snami) written on our old double, along with Aiden’s name (male essence / snail essence) underneath.

There was still a playing card above Ivana’s old single, after the throwing card fiasco where Raymond and Aiden became obsessed with throwing playing cards and relentlessly terrorized every part of Random with their newfound skill.

It was as if we were walking on a movie set, in the way that it felt unreal, untouchable, unmessed with. It was somewhat nauseating knowing how I had planned to spend the rest of my four years here, yet those were robbed from me. I knew I would no longer enter Loop to see my favorite upperclassmen sitting around chatting. I would no longer hear Ivana scolding me for waking up past noon, or Tafsia insisting we all go vegan, or Michaye quietly humming as she made tea. No more walking past Evelyn at 3 in the morning as she furiously scribbled down organic chemistry questions and we’d urge her to go to bed. None of that. They were long gone, virtually graduated a long time ago.

I walked with Kylee to her new room on Lounge side and sat on her couch while we caught up. I could only think about the life I would’ve had here. I was going to have Michaye’s old room, a beautifully painted, large single on Kitchen side. I would’ve woken up every morning and washed my face and brushed my teeth at the sink in the corner of that room. I would’ve gone outside to the kitchen, greeted all my friends like Wenbo, Melissa, Mariia, Kylee, and Alice, and made my breakfast. We would’ve chatted about our plans for the day. I would’ve then made my way to main campus for my first class of the day.

But of course none of that would happen, because I’m not living in Random. I’m living across the bridge. How could I forget?

Regret and regret and regret pooled in my gut and I couldn’t help but feel I made the wrong choice. But as I sat there, I saw how content Raymond was. He had also lived in Random but had not really connected with the dorm, only chose it because it was the cheapest. He was happy to be moving into his fraternity; I should be the same.

And so I started to think about my life across the bridge. Waking up in my sunny single, making my way downstairs to be greeted by other deephers, taking the 1 bus to main campus. It was still romantic. It was still a beautiful morning.

I think, really, what makes me afraid is that Random is familiar and DPhiE is unknown. Random is comfortable. I know what to expect every time I wake up and go to sleep. But that is also why my time in there is done.

And so I shook away all those thoughts and listened as Kylee talked about her life, and as I talked about mine, and more and more people started to come into the room, like Mariia and Alice. And we talked and talked and talked, facetiming our friends Aiden and Emma and showing them Random, a dorm they haven’t stepped foot in since the shitshow that was spring 2020.

And it felt good. It felt like old times. It felt normal.

And it was in this moment that I remembered how desperately I needed to cling onto these moments, how last semester represented everything I didn’t want out of a semester. Last semester, I buried myself in too deep into my coursework, becoming a shell of myself. I woke up, I psetted, I worked out, I slept. And it was pathetic and it was heartwrenching and it was dehumanizing. I love MIT not for its work or its academics, but for moments where I can sit in someone’s dorm room and talk for hours. Or when I walk out into the hall and someone is making pear pie and they offer me a slice. And I need to seek out more of these moments instead of burying my head into an algorithm I can’t solve.

I’ve decided to be kinder to myself this semester. I know I say that every semester but this time I really hope I mean it. I’ve decided to only take classes I’m genuinely interested in and worry about major requirements later and try and have a genuinely fun semester and create more time for friends and people. I’m hoping this way I won’t get too bogged down by the difficulties of my classes like I did last semester, with 6.006.⁠02 Intro to Algorithms

I do think last semester was a necessary evil, though, in that it showed me a lot about limits as a student and a person. I ended up crying nearly every single day because of that class, consistently scored two standard deviations below the average on every quiz, and still managed to pass, somehow. It showed me that grades really do not matter, since I genuinely feel I’ve grasped the content from the class despite getting a C in it, and I am grateful I won’t have to relive that hellhole of a class ever again. It also made me a lot more appreciative of the classes I did enjoy, like 7.014⁠03 Intro Biology and CMS.626.⁠04 Fans and Fan Culture

I learned a lot last semester, both academically and personally, and I hope to grow this semester, too. There’s a lot of big, scary changes coming my way this semester. I’m cross registering for the first time at Harvard, taking a cooking class there. I’m living across the bridge and I have a single for the first time, so I’ll be getting used to the commute and learning how to decorate my own room. I’ll be taking a creative writing class in writing short stories, my first ever creative writing class ever. I’ll be an LA⁠05 A lab assistant. I host office hours and help students with Intro Python psets and questions. for 6.0001⁠06 Intro Python and having to help students learn Python, which is absolutely crazy since I only learned how to code in college. And so many more new things and adventures are coming my way. I’m excited. And nervous. But mostly excited.

And I hope junior year brings new adventures and new memories I can share here on the blogs.