Hi! I disappeared from the blogs for the past few months, oops. I hope you all are safe and well!

Here’s what I’ve been up to in quarantine:

So in September 2018, at the very beginning of my sophomore year at MIT, I signed with my wonderful agent, Penny Moore of Aevitas Creative Entertainment. If you’re curious about how that happened, I wrote about it on my Tumblr here. At the time, I had written an upper MG (middle grade; for ages 8-12) contemporary fantasy novel. During our initial phone call, Penny told me that it was already in pretty good shape and we could probably go out on submission (send it to publishers) that fall.

That didn’t happen. Life got in the way. I joined the cheer team, I cross-registered at Harvard, I got more involved with my living group, I made new friends. In mid-November, I finally managed to finish my first round of revisions and sent it back to Penny. When she replied with more feedback in December, she also told me that we probably wouldn’t go out on submission until the following year. 02 fun fact: publishing gets pretty quiet in December, and editors don’t acquire many new projects

The months flew by. I participated in an entrepreneurship bootcamp over Independent Activities Period. I became an admissions blogger (hi!). My short story collection, Cranesong, was released. And when I revisited my MG novel again, it wasn’t the story I wanted to tell anymore. I had changed so much in the past six months. I didn’t want to go out on submission with it, because if it sold, I would be dedicating the next two years of my life to a novel I didn’t believe in. 03 it takes up to two years for a book to actually be published after it sells!

In April 2019, I began drafting something new, something drastically different. It was contemporary YA. It was about a hackathon at MIT. It was all about impostor syndrome and being surrounded by kids way smarter and more accomplished than you. Of course, this is how I felt; I was a comparative media studies major at a technical institution. My friends had international Olympiad medals and high-paying internships at big-name companies. I couldn’t get past resume screenings at most places I applied to, my GPA was still recovering from a bad freshman spring, and my skin would not clear up.

I don’t believe in love at first sight, but there was something bright about this new project that made me just know it was the one. I knew it was the story I wanted to debut with.

It took me eleven months to finish writing what would become You Had Me at Hello World, because life kept happening. I got a UROP (Undergraduate Research Opportunities Program). I went to Jerusalem to teach entrepreneurship to high school students.

During my junior fall, I changed my major to mathematics and barely worked on my manuscript. I figured I’d have time during the upcoming Independent Activities Period, but then my friends and I teamed up for the web programming competition, and . . . suddenly it was February 2020 and I hadn’t finished my novel.

Spring semester started. I promised myself this would be the semester I finally went out on submission. Also, my contract with Penny needed renewal this upcoming September, and I was lowkey worried she would drop me for, like, being a failure of a writer who couldn’t get her life together enough to actually write a book. 04 this is, of course, ridiculous but this was a very real fear of mine

My draft was an unfinished mess. I started saying no to everything and spending all my time outside of school on the manuscript. My mind wandered in class—I was figuring out plot threads, filling in the gaps I’d skipped over before. The coolest thing was realizing that all the weeks that slipped by without me typing a single word hadn’t been wasted; rather, I had spent that time becoming the person who could write this book.  Within the last year, I’d become much more confident and less crippled by impostor syndrome—and that clarified my protagonist’s character development. I could only see how she needed to grow after I’d figured that out for myself. 05 please note, my main character is a Chinese-American girl from Oregon, and her emotional journey was inspired by my own, but she’s not that similar to me. for example, she can actually code

The week before the pandemic sent us home, I emailed the finished draft to my agent. We went on submission in early April. And a week later, Penny asked me for my schedule, and she began setting up calls with editors who were interested in my novel.

Over the next several days, I spoke to seven editors who all had such amazing ideas for my book and my writing career. They were all so brilliant and I would’ve been honored to work with any of them. We went to auction the following week, and after some really agonizing decisions, I’m so, so incredibly joyful that You Had Me at Hello World has a home with Simon & Schuster Books for Young Readers! My editor, Jennifer Ung, is such a dream and has worked on so many amazing books I adore. 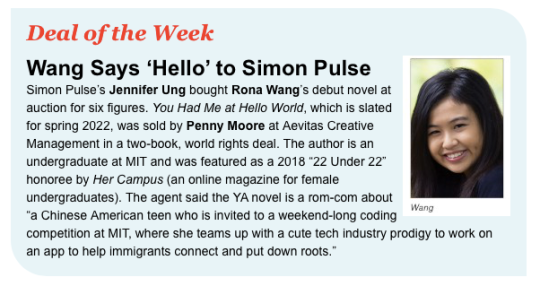 I’m so thankful for my badass agent, Penny Moore, who believed in me even when I was just a teenager with big literary dreams; my editor, Jen Ung, and the rest of the Simon & Schuster team for all their love and care for my book; and everyone at MIT who has read my work or forged memories with me over the years.

You can add You Had Me at Hello World on Goodreads!

The name's Rona, which stands for Return On Net Assets. No joke. I'm from Portland, Oregon, which means I think tap water from any other city tastes inferior. I entered MIT as part of the class of 2020, but spent a gap year working at a startup in New Zealand. I spend a lot of time making up…
Keep Reading