how to put together an ohms concert by Vincent H. '23

apparently we have a concert this weekend

for those of you who don’t know, i’m part of the mit ohms, a south asian a cappella group. this post is a look at the different components of an ohms concert (which, by the way, we have a concert this saturday that you should come to if you happen to be a current mit student!)

we mostly sing songs arranged by current members of the ohms. arranging here refers to the process of taking a song and turning it into sheet music for an a cappella group, ie writing a solo part and a part for each voice group (which, in the case of the ohms, means soprano, mezzo, alto, tenor, sometimes baritone, and bass in order of highest to lowest pitch). we use musescore to arrange songs; it’s a free program that makes writing and sharing musical scores very easy 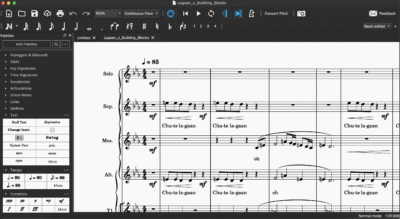 there is an important distinction between arranging and transcribing, which is the process of taking a song and trying to recover its original components (vocal lines, instrumentals, percussion, etc). transcribing focuses on trying to produce a score which is as close to the original song as possible, whereas arranging often preserves very little of the original song. usually in arranging you keep the solo line (ie. the lead singer) from the song, but you are free to replace the background and instrumental lines with whatever you want to

why do we take so many liberties with arrangements instead of singing direct transcriptions? it largely comes down to singability: the most important property an a cappella arrangement can have is that it must be singable. there are a number of issues you run into if you try to sing a direct transcription of a song – oftentimes the instrumental backing will contain sequences of notes too fast to sing (because instruments can eg. play scales much faster than a human can sing them), or there will be moments in the song with more distinct simultaneous pitches than voice parts in which case you are forced to ignore some of the pitches, or there will be notes that are really hard to sing (because they’re unintuitive) or literally impossible (because they’re outside standard human vocal range)

there are other considerations besides singability that also go into producing an arrangement. probably the next most important one is that an arrangement should sound interesting to the audience when sung. this means cutting out repetitive parts of the original song, removing or rewriting excessively long intros/outros/bridges, adding rhythms and harmonies that don’t exist in the original song to create a thicker and more active sound, and so on. in the case of the ohms this also means we often mash up portions of multiple songs into a single arrangement – we do this because, although we are a south-asian-themed group, we recognize that much of our audience doesn’t listen to south asian music and doesn’t understand hindi or other languages. so most of our arrangements end up being mashups of a bollywood song with an american pop song, and i think this does a pretty good job of appealing to a wide audience

there are many pros and cons associated with our current policy of singing fresh member-arranged songs each semester rather than recycling old arrangements. the pros are that learning new music for each concert is a lot of fun, and whenever someone in the group likes a song a lot they can just arrange it and we will probably have capacity to learn the song. the cons are that rehearsing new music from scratch is hard, and arranging is a lot of work – you need to be familiar basic music theory, learn how to operate musescore efficiently, understand how to write singable lines, and then afterwards it still usually takes a double-digit number of hours to actually write down all the notes and musical ideas you have in your head. so there have occasionally been times where we’ve run out of music to learn, because everyone in the group was busy so we simply didn’t have any new arrangements. tldr it takes a lot of work just to get to the point of having music to rehearse

sometimes an ohms member wants to sing a song but doesn’t want to go through the process of arranging it. in this case, said person will usually find an existing arrangement of the song on the internet, find one willing ohms member for each voice part, and those people will learn the song independently from the rest of the group and perform it on their own. we refer to these as subsets; subsets typically only consist of 3-6 people and we usually have a few per concert

our fall 2021 concert theme is finding nemOhm. our previous in-person concert theme, from fall of 2019, was liOhm king. to pick a concert theme we start by brainstorming as many movies/shows as we can whose names have a syllable that could plausibly be replaced with “ohm”; sometimes the puns are of dubious quality. after our song list has been finalized, we vote on the concert theme which has a plot that best fits with the songs we are singing. examples of other concert themes we’ve had in the past include avengers – Ohmgame, hOhm alone, and harry potter and the sorcerer’s stOhm

after deciding on a theme we write skits that mirror the plot of the theme we chose. usually all the main roles in the skits are given to new ohms members. then we try to place each of our songs in a relevant part of a skit. for example, two years ago one of our songs was maa (from taare zameen par) about a kid adjusting to life at a boarding school without his parents, so the most natural time to sing maa in the context of the lion king story was immediately after the death of simba’s dad. similarly one of our other songs was does anybody have a map (from dear evan hansen) about a mom who has no idea how to parent her child and feels lost, and the most natural placement for this song was during the middle section of lion king when simba is wandering aimlessly in the wilderness. sometimes a song just doesn’t fit with the concert theme so we put it in a somewhat arbitrary part of the concert because, well, it has to be sung at some point

concert publicity is more or less what you’d expect. we send emails advertising our concert, print out posters that get distributed to various locations around main campus and dorms, and post on social media

most of the work for publicity is in taking pictures that can go on emails and posters and stuff. ideally the pictures should be themed, though for a theme like finding neOhm this is hard to accomplish (eg. it’s probably not worth it to buy a bunch of fish costumes for one-time use) so instead we take normal pictures and someone does a lot of editing afterwards: 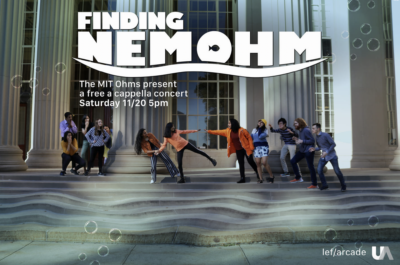 there is a lot of additional stuff that only takes place on the day of the concert. probably the most important points are: 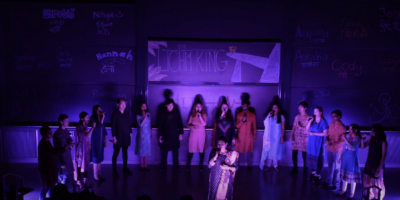 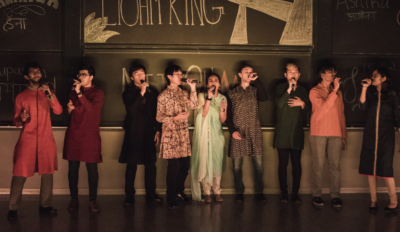