MIT’s temporary emergency closure means I no longer have an excuse to put off finishing all the half-baked blog posts from this month. The idea that IAP is ‘infinite time’ can be so dangerous, because I ended up working on a bunch of cool video projects while more relaxing things like catching up on my movie/book/TV show list fell by the wayside. Not to mention writing and casual vlogging.

But my friends and I have managed to get out of the dorm occasionally. So without further ado, here are some other meanings for IAP:

My friends Jamal E. ’14 and Andrea H. ’18 have been planning a pancake-eating contest for weeks to decide who truly is the greatest lover of pancakes. Last Wednesday, a group of five of us headed to IHOP in Harvard square to settle the score. I was there for eggs, toast, and emotional support.

We ended up livetweeting the contest and documenting every stack with a photo. 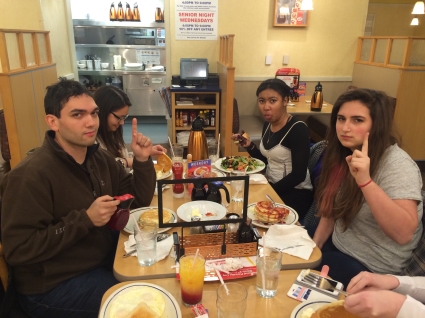 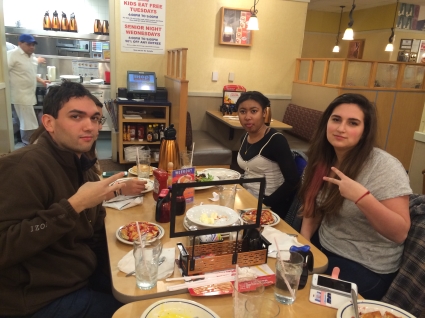 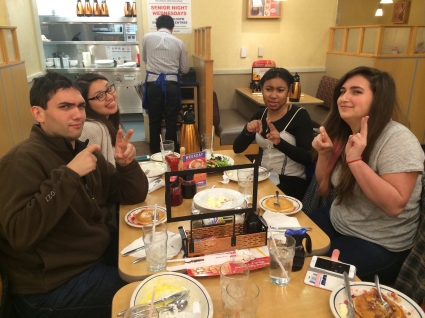 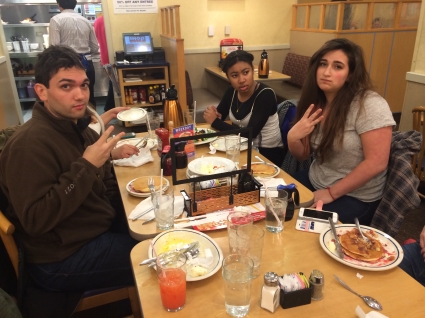 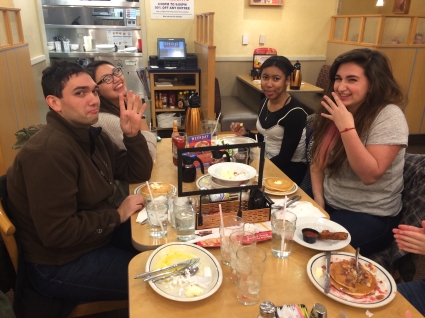 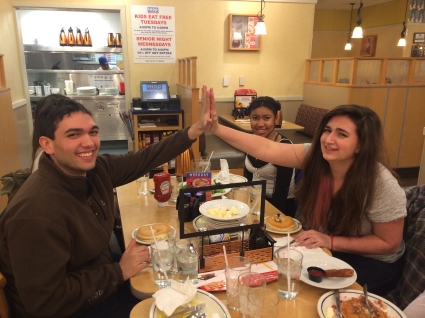 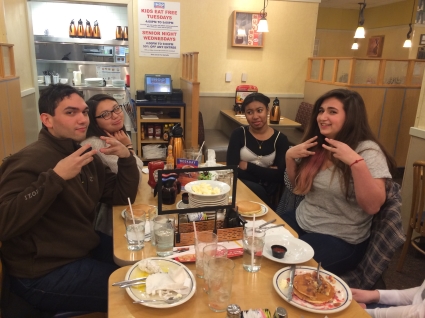 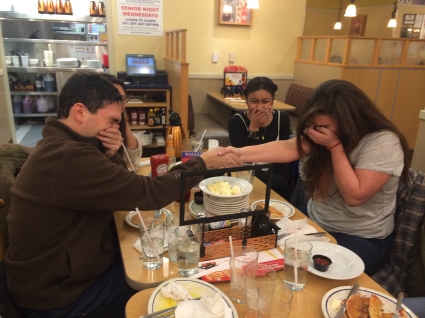 They tied at 14 pancakes and ended the contest with a handshake and a truce. By that point in the night, there was more suffering than fun and the pancakes being delivered to us were 30% batter. As a table of 5 people, we managed to consume 40 pancakes (among other food), and headed home with full stomachs and no desire to return to IHOP for infinite pancakes anytime soon.

Last weekend, 10 of us from B-Entry went on a road trip northward to Montreal. Beforehand, I thought it would be fun to vlog the adventure, but most of the footage that I actually recorded was from the car trips there and back. I guess it’s kind of appropriate, though, since I was one of the two drivers and probably spent around 20 hours behind the wheel over the course of 3 days.

Here’s a quickly-edited montage of everything I filmed, including little bits in the middle where we took a walk to the top of a hill in Mount Royal Park. Unfortunately, I was too busy participating in our epic snowball fight to worry about filming bits and pieces of it.

My favorite types of vacations are the ones filled with walking and wandering and exploring rather than necessarily packing a schedule full of activities, so this mini-hike was definitely a highlight of the trip. 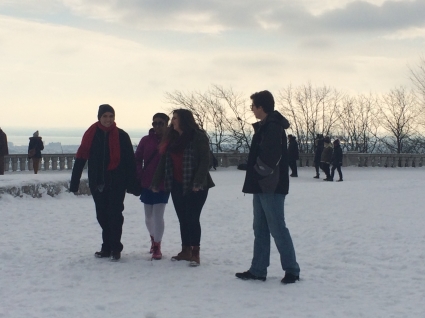 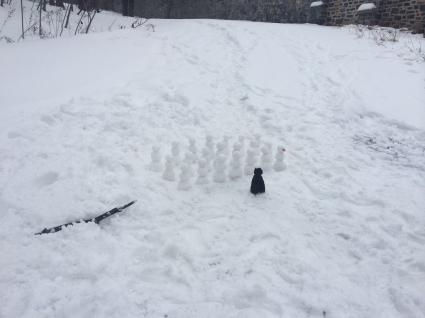 As the local/national news has stated and restated, a blizzard swept through the Northeast today. Social media has called it the #snowpocalypse, #snowmageddon, or #ragnasnow. Although that last one is mostly just me. MIT closed down (and will remain closed until 5pm tomorrow – hooray for snow days!) and the streets of Boston and Cambridge filled with feet of snows.

My snow day was filled with a lot of huddling in the warmth of B-Entry, looking out the windows at the storm while wrapped up in blankets or drinking hot chocolate or watching Firefly or rereading Almost, Maine (one of my favorite plays about life and winter and people).

I went out into the storm once to take a walk and try and sort through some jumbled thoughts. It’s so beautiful and quiet while it’s snowing – there were nothing but a few snowplows on the street and a few other people who were braving the cold. For the most part, all I could hear was the wind swirling and the crunch of the powdery flacked beneath my boots. It was quite nice. 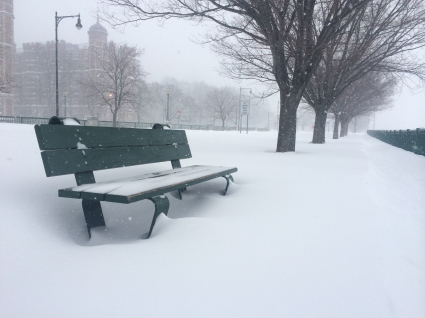 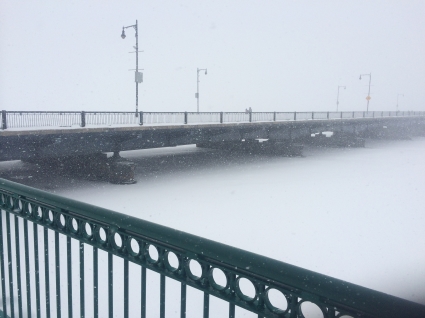 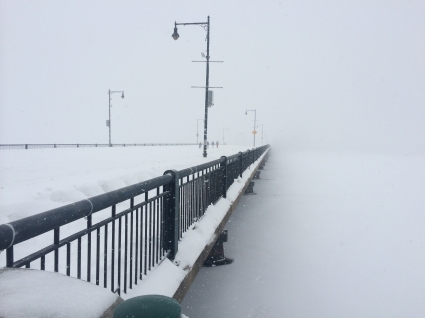 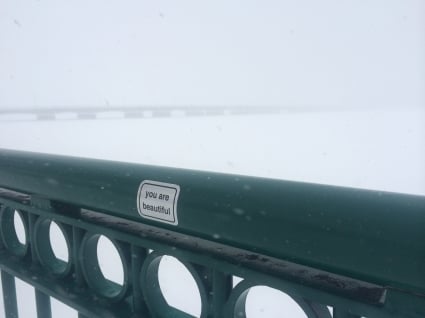 I ended up interrupting the walk a couple times to take some video. I think I’m more drawn to the views across the river than on campus, perhaps because the frozen Charles River and the City of Boston swallowed up in the snowstorm are just so surreal. Sorry, MIT – I know the great dome has its own charm.

I didn’t really start this post with a point, other than to write ALL THE THINGS that I’ve been putting off thus far. I guess an unofficial theme for this IAP has been to explore and get off campus, since that’s one of the hardest things to do when the semester is in full swing.
I’ve personally found that I get the most out of my time at MIT when I’m doing things completely unrelated to classes. I think I went into college with the impression that finally I’ll have an abundance of classes teaching me exactly what I’m interested in learning. But I’ve found that I need to continue teaching myself and leaping at random opportunities to learn things I want to learn, even/especially if MIT ignores them in its curriculum.
And IAP is a wonderful time to keep doing that.