This semester I’ve lived in an apartment with three roommates: one omnivore, one vegetarian, and one vegan. I decided on the day we moved in that I would try out vegetarianism, just to see how it went. It wasn’t hard: we cook for each other, which means that dinners are vegan, and I’ve never been a sandwich person, so there was nowhere I had to consciously cut out meat.

I expected this vegetarian thing to last maybe a month, maybe more — but apart from a few bites of poke, the last time I ate meat was September first.⁠01 airport sushi, surprisingly good.

I’m kind of surprised that this has worked for me. I run a heckton, so I assumed I’d be craving protein, but it turns out I can make up for it by eating a lot of beans and eggs (and sometimes fake vegan eggs, which are made of dye and other beans, and actually kinda slap).

I tried to go vegetarian once before, in February, when I stayed on a vegetarian farm. I’d been eating less meat ever since coming to Europe, since pork was ubiquitous, and I keep somewhat kosher. I went stopped eating meat on the farm and tried to keep it up after I left, but I wound up working on a retreat that served meat dishes all the time, and they smelled so very good.

Now, though, it’s very convenient. I’ve never enjoyed cooking, so I don’t know what I would do with meat at home, and only two of us would eat it. We eat out rarely, and Indian and Asian food is fantastic with or without meat. My Achilles heel would be Mexican fast food: those brightly colored places with cheap burritos and names like Nico’s or Losbetos or Filiberto’s. But according to Google Maps, they don’t seem to exist in east Cambridge.

My vegetarianism will probably end when I get home, and I’m ok with that. I’m glad it’s lasted this long, though. I think the key, for me, is to trick myself. I can’t think of sushi and then reconcile myself to the idea of never eating it again, ever. But I can say, ‘not this week,’ and saying so gets easier with every passing week. 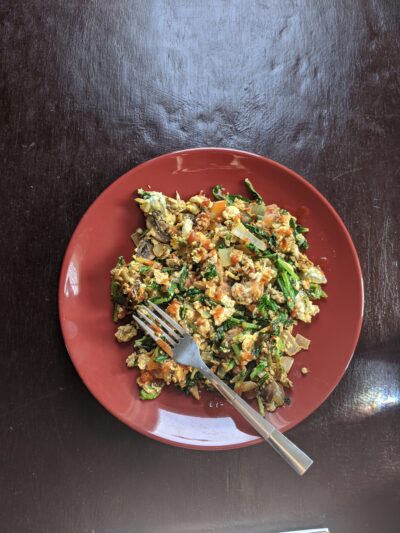 Recently, though, I’ve been wondering just how long I will last.

I have a turkey at home named Jeffrey, and whenever I take my friends to meet him, they ask if he’s going to become Thanksgiving. I always say “no” with varying degrees of horror, but this’ll be the first Thanksgiving in many years that I don’t eat some other, anonymous turkey, whose life was not as happy as Jeffrey’s. And like, that’s okay, or at least as okay as any of the other countless evils we perform — my running shoes were probably made in a sweatshop, and my car back home guzzles gas to the tune of 20 miles per gallon, and my apartment is toasty even though it’s only me at home right now, and I could just put on a sweater instead of wasting the energy.

But anyway, I was thinking, shouldn’t I maybe eat turkey tomorrow? I’m going to be with a friend’s family, so I didn’t want to be rude — and, as I’ve said, I’m going to give up this whole no-meat thing eventually anyway.

But it seemed like a lot of effort to give it up tomorrow.

I was raised kosher,⁠02 Or rather, mostly kosher. I used to have shellfish and meat with cheese all the time. so I’ve only tasted pork a few times in my life. The one time I ate it on purpose, I was at a hostel in Italy and a group of travellers were splitting a pot of pasta carbonara. I was hungry and didn’t want to walk somewhere alone to get food, so I ate with them, even though the pasta had pig in it. The travellers were great, their conversation was entertaining, but the meal itself just kinda tasted like guilt. Breaking kosher law, for me, takes so much effort that the benefit isn’t really worth the cost.

And now I’m feeling that way about eating all kinds of meat. This feels like progress.

This is probably just a phase, and probably will not last. But I’m glad I took it this far, and I’m glad it’s gonna be around for one more day, and for perhaps another week.

Jeffrey in all his glory
The bulge below his red wattle is actually an air sac, which he blows when he stomps his feet to make it sound like he is stomping very loudly.