Impressions of a Harvard Class by Amber V. '24

As they said in the old, more hardkore days of MIT, you all might have heard of a liberal arts school down the road.

It’s got buildings of red brick and marble, Corinthian columns, old-style decor. T-shirts that bear its name are sold everywhere from the airport to Boston Commons. That name is Harvard.

Harvard has another feature, known as a wide variety of humanities classes.

Don’t get me wrong, MIT has its share of humanities. I’ve taken classes from the history of the French Revolution, to Latinx studies, to a literature class on dystopian novels. However, looking through the Harvard catalog shows that Harvard has a greater volume of non-stem classes — there’s an entire department of folklore, for example, and another that covers “Ethnicity, Migration, Rights.” There are classes about the history of tattoos, and Yiddish politics, and ghost stories.

Fortunately, MIT makes it quite easy to cross-register for up to two classes at Harvard. This semester, I took advantage of that for the first time, and cross-registered for two classes: one on Irish folklore, the other a writing seminar with a focus on re-telling fairy tales.

Want to cross-reg? Simply choose a class in the vast and expansive Harvard course catalog, then mosey over to wherever the add/drop forms exist on Websis, and type the Harvard course number into the form. MIT will magically convert it into an MIT course number (which, predictably, has more numbers and fewer letters), administrators at Harvard and MIT will approve it, and then voila! 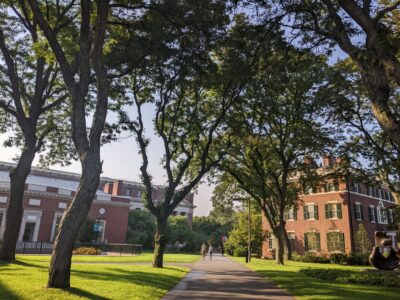 Here’s my first impressions of those classes:

some preconceptions turned out to be totally true 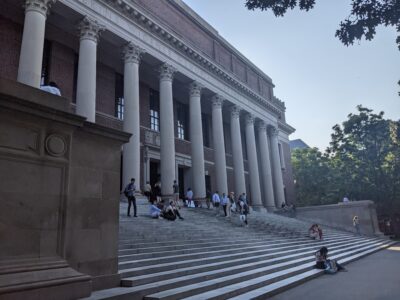 steps of the fancy majestic Lamont library, where I used to eat boba with my housemates during the pandemic.

things which surprised me

All this said, I’m glad I went to MIT — I love our culture and communities, our makerspaces and fancy tools, our tunnels and east side dorms (the ones that haven’t been axed⁠02 also the ones that have been; viva senior haus and bexley ); and our free food events which fed me all day this random Friday. I would choose MIT again. And I would do so knowing I could take advantage of Harvard’s classes and campus. I am excited to spend this semester visiting Harvard. I doubt this is the last time I’ll cross-register.

All the books assigned for my Harvard classes! From top left: The Bloody Chamber by Angela Carter, Folktales of Ireland by Sean O'Sullivan, The Ballad of Black Tom by Victor LaValle, A New and Glorious Life by Michelle Herman, and Grendel by John Gardner