hello from the number side

“Who are you?” said the Caterpillar.

This was not an encouraging opening for a conversation. Alice replied, rather shyly, “I—I hardly know, Sir, just at present—at least I know who I was when I got up this morning, but I think I must have changed several times since then.”

I’ve been re-re-re-re-rewriting this post, mostly because introducing myself is way harder than I thought it would be. I’ve been known to say things like “Well, I’m fairly sure that I have two kidneys,” and I’m almost certain that I have two.⁠01 Can you really be certain you only have two? Maybe you have three. Maybe you have one. Have you ever <em>checked?</em> Unfortunately, I’m not nearly as confident about my personality as I am about my kidneys — which just makes my tendency for already-nebulous statements even more nebulous to the point of unwritability.

I would probably still be re-re-re-re-re-rewriting, but I had a weird conversation with my friend in which they mentioned that you can describe yourself in terms of probabilities. If my electrons can be unsure of where they are, then so can I! Unlike my electrons, though, I’ll spare everyone the pain of Schrodinger’s equation and just provide some estimates about myself as I exist today.

Now that we have some idea of how likely I am to Do A Thing today, we can ~extrapolate~. To figure out what I’m like (as a whole) on all days other than today, let’s make some predictions (via randomly generated combinations):

In summary, this is (theoretically) what my life looks like…

Image description: Alice is holding a hand mixer and a banana while standing near a hyperboloid of one sheet made of cake. Bananas, yarn, and paint are scattered all over the floor, and snippets of code appear in the background. 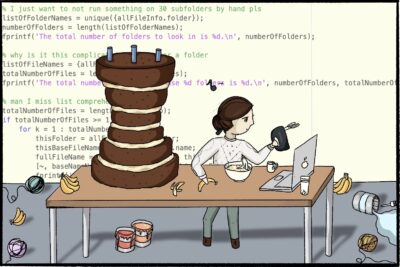