Finding my confidence through inline skating.

When I introduce myself in new groups, a lot of times I bring that up how I inline skate, or rollerblade.

Even after three years of being in the inline skate community, one of my first images of a “rollerblader” is this: 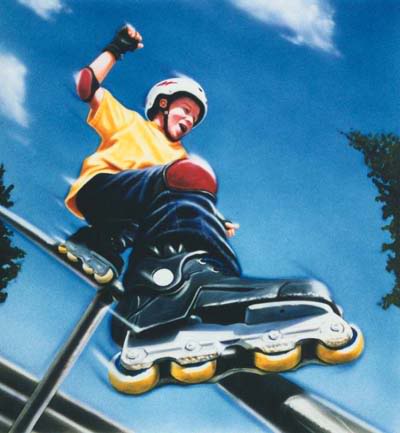 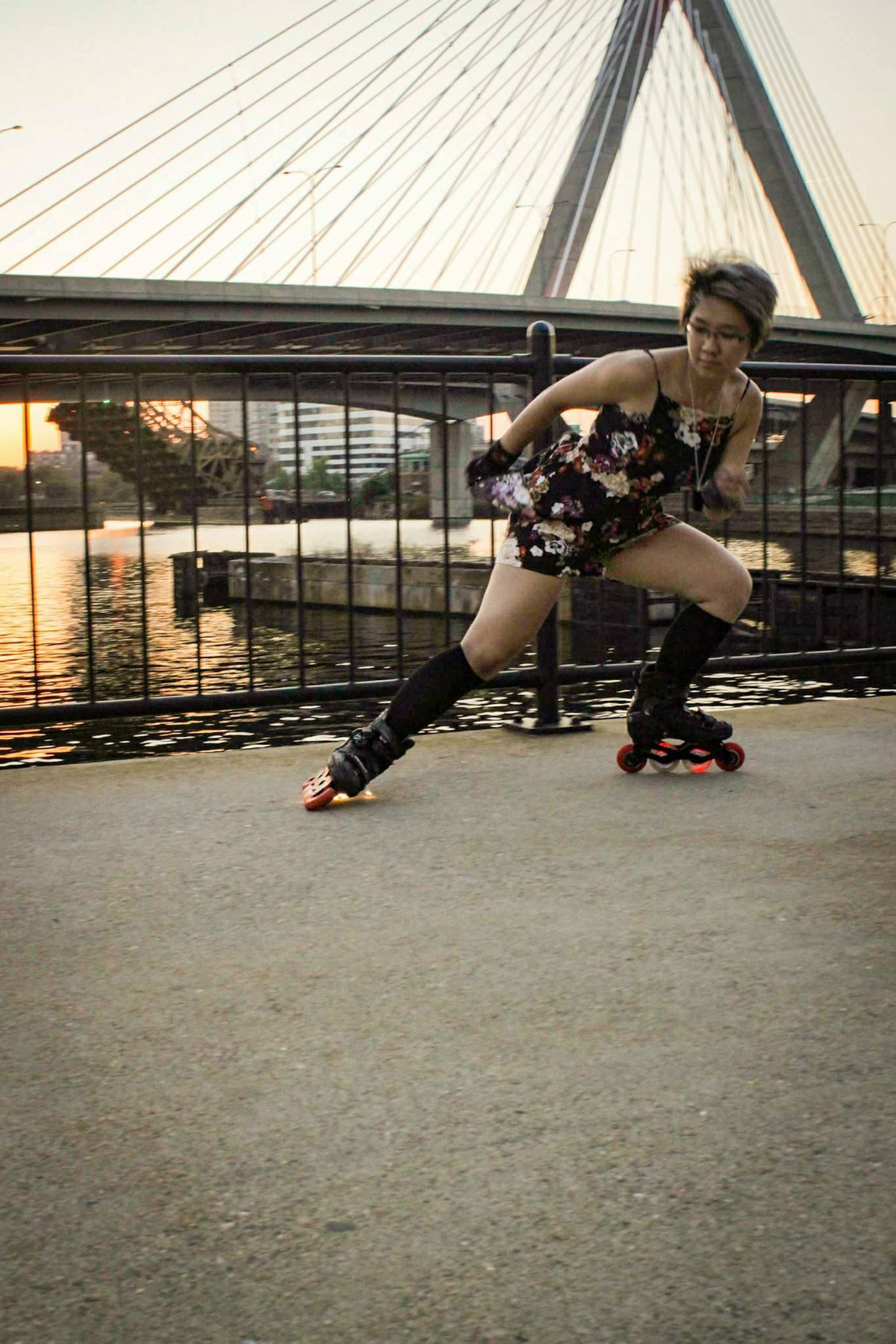 yes those are sparks

I didn’t start skating until I got to MIT my freshman year. I got a pair for $25 with kneepads, elbowpads, and wristguards at Goodwill. I had always wanted to learn, but living near hills made it too intimidating to learn. The area around MIT seemed very friendly and flat with bike lanes.

My first attempt ended with me moving 5 ft forward in the East Campus courtyard, scared out of my mind, hitting a sidewalk crack and falling straight to my knees. I put the skates away in my closet like many one-time hobbies.

I definitely could have just ended it there saying, “Rollerblading isn’t for me, I have no balance”.

But I tried again. And I’m really glad I did.

I asked a friend who also skated at MIT to teach me how to step over cracks and brake.

Then I started skating around campus, to class. I would take them out at 3am and skate my PNR emotional frustrations away.

The feeling of racing down Mass Ave, gliding from one foot to another, is an amazing adrenaline rush. Being able to make meetings or classes across campus in minutes and get more sleep? Even better.

Getting Out of the MIT Bubble

On a summer trip to explore Chicago, I coincidentally hit Skate Chicago, an annual weekend of inline skating across the city. I made friends from all over the U.S, and from them learned about other annual national city skate events.

Everyone I met at these events was super welcoming. I would ask them how long they had skated, and they’d tell me somewhere between 5–20+ years.

I got better at skating by just approaching other skaters and asking them how they got over the shitty pavement we’d just passed or how they stopped so quickly going so fast.

I made lifelong friends that I could couchsurf with. They shared what it was like to grow up in these cities and to struggle with issues like gentrification. Since skating was really big in the 2000s, these friends were older than me but still had so much well-timed relatable life advice.

I was so inspired by this community of self-reliant, expressive individuals who come together despite huge differences in age, socioeconomic status, and cultural background, simply to skate. I saw people that were happy — free from the pervasive feeling at MIT of not having done enough — and still making a living. 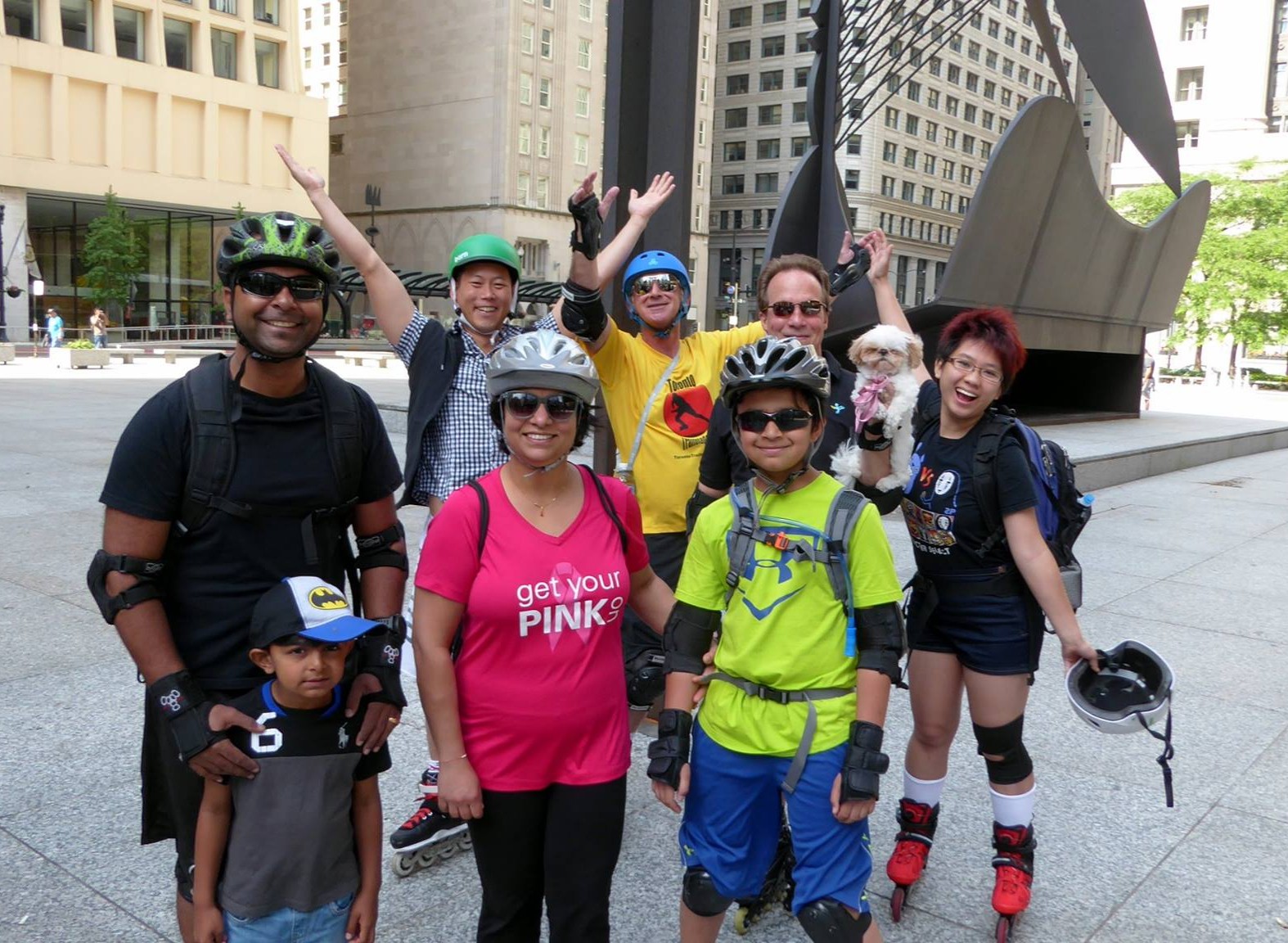 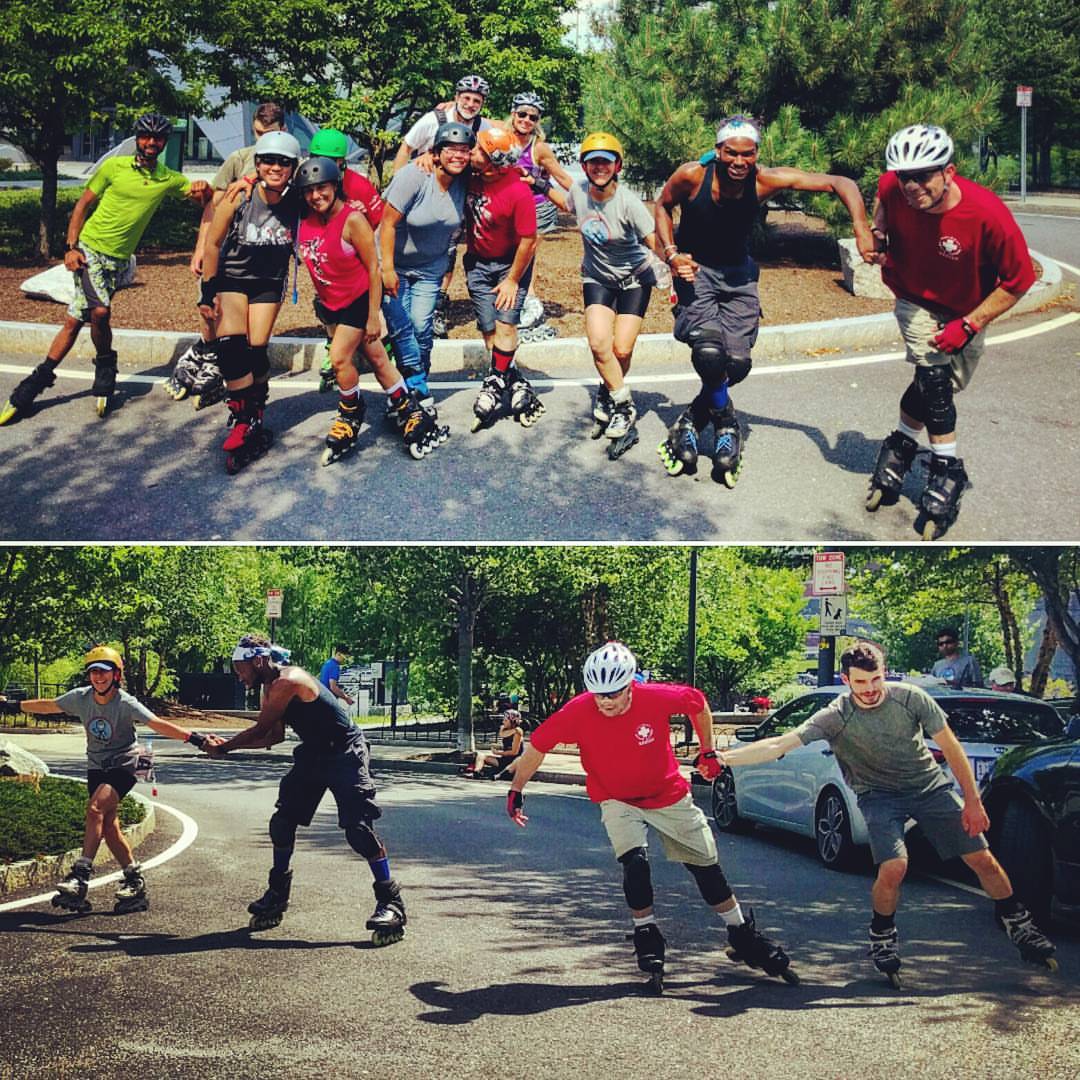 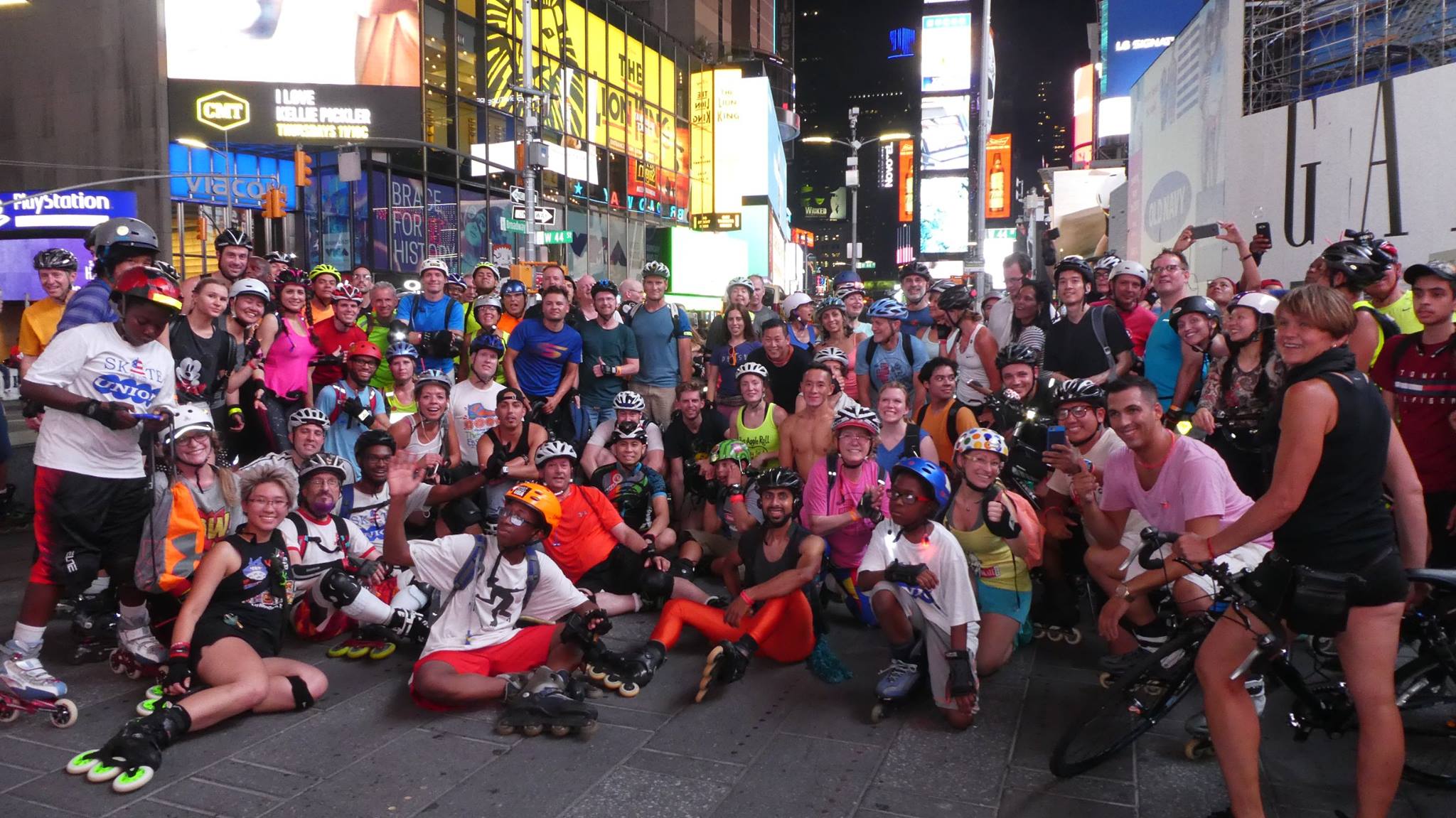 Showing Myself that I Can

For one of the first times in my life, I felt like I could get better at something.

I skated for a total of 15 miles in Chicago, then 25 miles in Boston, then 50 miles in NYC. My endurance was increasing. From 15mph to 33mph, my speed record was climbing. I could do tricks that I couldn’t before.

Still, trying to learn some moves would almost end up with me breaking down in frustration. I would try over and over again not able to execute the move or make any progress. In those moments, I would forget that sometimes the skaters around me had years, sometimes decades, more time and experience to learn.

I recognized that feeling; those moments felt just like being at MIT, surrounded by students with years of experience at X or Y and internalizing my lack of demonstrated ability as “I’m just not cut-out for X and Y.”

But when I saw those same skaters struggling to learn a new move or to unlearn a bad habit, it reminded me that we all are learning.

It can be hard to feel like you’re making any progress at MIT. A lot of progress is about building confidence and increasing tolerance for challenge — things that are hard to be proud of when they look like an almost-average on a test.

But when I skate, there are still so many things that I can point to and say, “I couldn’t do that, but now I can.” T stopping. One foot skating. Backwards skating.

Showing Others that They Can

Last year, I became certified to teach skating through the Skate Instructor’s Association (SkateIA) to help grow the community. In becoming an instructor, I realized that the responsibility of a teacher is about guiding those who can, but feel like they can’t, towards realizing their own ability.

The moment this came together for me was at a skate camp this past August, when an uncle brought his niece to me. They were about to go home because she was in tears, unable to do a move called the pivot. And I was nervous as a first-time instructor, nervous that I’d be able to show her how to do it.

But I remembered last year at this same camp, at least four different instructors explained and demoed this very same move to me, including a world-ranked slalom skater. I remembered how horrible it felt when everyone else had already moved on to the next move. How I felt like I was wasting everyone’s time and asking for too much help. Similar to how I’d felt asking friends for help on psets.

And here this person was in front of me, avoiding eye contact and visibly deflated with no faith in herself whatsoever. Exactly how I’d felt a year ago.

I broke down the move into three steps. She tried, didn’t get it, and seemed even more hopeless.

I added the next step and she struggled a bit. But we worked together, trying different things and ways of explaining it. And she got it!

She started looking cautiously confident and asked if we could add the next step.

And when she got it, her face completely lit up. She’d felt it, one of the first moves in the slalom skating world.

She didn’t go home. In fact throughout the camp I’d look over to check in on her and she was putting herself in the challenging groups.

You could see the way she was pushing away the doubts and fears, drawing from an internally generated faith that wasn’t there before.

And that’s what skating has given me that I want to give to others.

Mitchell Gu ’18 and I started the MIT Inline Club this past year. As soon as it stops tempermental snowing in Boston, we’ll be skating into the city, around the esplanade with Ashay Athalye ’20, and teaching lessons again.

And at some point after I graduate in June, I will skate across the U.S.

Inspired by Yanise Ho, or Bladress, who’s skating across the US right now on $0 and lots of love and trust. She shares stories of the families who’ve welcomed her in, of strangers — now friends, who helped her continue on her way.

And there’s a whole international community of skaters.

That Russian girl who every inline skater knows because at least four of their friends have sent them her viral video.

Instagrammer @irane_surf who rocks a hijab and inline skates in Indonesia.

Thundrblade, a Kyoto based startup, is launching their crowdsourcing for the first electric inline skate next week.

Everywhere, people are redefining what it means to skate.

For me, skating has been a way of challenging myself to connect with people so different from me, joined together by this community of people who’ve made it their own.

As a lifestyle.
As an extension of themselves.
As a way to be a positive force in their community.
As a method of sharing one’s life experience with others.
And as a way to make the world a better place.

This is my first post as an admissions blogger and I chose to write about skating because of how much its helped me grow and thrive at MIT.

My name is Caroline Mak, and it’s nice to meet you.