No, you don't have to speak French to live here.

Begin by walking down Dorm Row, which takes you past almost all the dorms in West Campus. 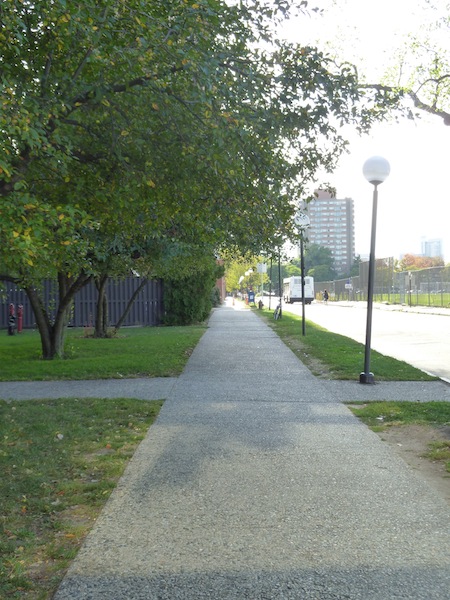 Stop when you are greeted by the following sign: 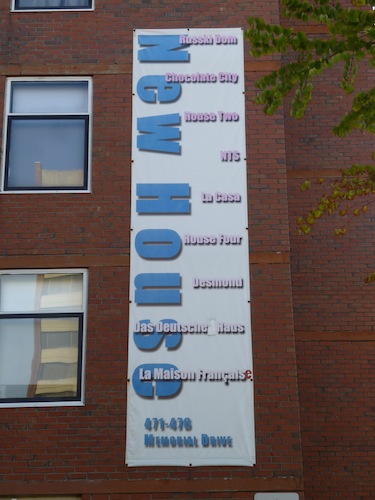 You have arrived at New House: home to all of MIT’s cultural houses, as well as a few culture-unspecific living groups, like Desmond. 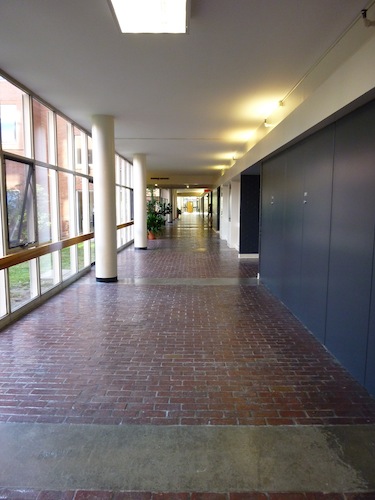 Walk to the very end. Do a couple of stretches for your hamstrings and calves, and then climb to the top of the stairs (and feel thankful that you aren’t dragging an enormous suitcase or bags of laundry behind you.) 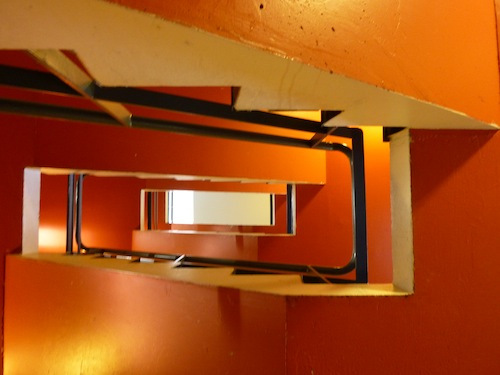 It’s a good work-out. You emerge in a lounge, where a group is inevitably playing either Super Smash Bros., Super Mario Kart, or Rock Band. They’re preoccupied, so keep walking, and enter the kitchen/dining area.

You are in French House: home to 6 refrigerators, and 26 undergraduates from all years (with a huge range of majors, hobbies, and French-speaking ability).

We cook dinner every day (except Saturday) in teams of four. It’s a good deal: five evenings a week, I have a four-course home-made dinner made for me, and one evening, I learn to cook. At midnight, cookies or muffins or pretzels or cake will magically appear on the sac-table*, and everyone will help themselves.

What’s that? You’re dying to meet the people I live with? Understandable. Let’s start with that kid over there – the one at the dining table closest to you, with the brown hair. That’s Davie.

Davie is a junior from southwest Vermont, double-majoring in Math and Music. At MIT, he is involved in the Gilbert & Sullivan society – which performs comic operas by Gilbert and Sullivan – and the chamber chorus, which is a class that runs for three hours per week.

Non-MIT-related hobbies include “birding”, which consists of “watching birds, looking at birds, and studying birds”, and doing the same for insects. Davie has written about a hundred and fifty nature articles, most for a local paper, but also a few in the Vermont Entomological Society Journal and local nature newsletters. At his house in Vermont, he has found about 540 species of moth, seven of which had not previously been found in Vermont.

If you’re feeling brave, go ahead and challenge him to a game of bananagrams.

Afterwards, ask him why he likes MIT. He’ll tell you that in all his time here, he has met “maybe one person” who wasn’t “really nice.”

A girl at the next table chimes in with “it’s pretty amazing how many people are into the humanities in French House!”

This is Elizabeth, a freshman from Ann Arbor, Michigan, who recently declared a major in Course 16: Aeronautics/Astronautics. Ask her why.

“Until 7th grade, I thought I wanted to be a teacher…but then I watched this NOVA episode about the Mars rovers Spirit and Opportunity.”

When she saw the moment of celebration in mission control, she realized that she wanted to be a part of that.

Elizabeth plays the violin in MITSO (the Symphony Orchestra), and would like to stress that “Adam Boyles, our conductor, is really awesome.” She’s also involved in WiSE, which pairs MIT students with high school girls in the area. They meet once a month and discuss what it’s like to be an engineer through lab tours and activities.

Ask her about her summer plans: you’ll be jealous (I’m jealous!). She’s traveling to Germany (the same program that blogger Hamsika did last year) to teach math and science to high school kids.

If that’s not cool enough, she’s UROPing in the Space Systems lab, working on satellite controls with a grad student.

She also says that she “really likes reading literature.” You begin to ask what her favorite book is, and she answers before you can even finish the question: “To the Lighthouse, by Virginia Woolf! It’s a really really really amazing book.”

Ask her about French House.

“It’s the people here who are really special. Juan can speak four languages, and Davie sings in his room all the time, and Julie’s writing music and Dora’s a double major with history, and Alan squawks at people.”

Sure enough, as you pass Davie’s room on your way back to the lounge, amazing opera floats out the door.

When you get back to the lounge, the game of Super Smash Bros./Super Mario Kart/Rock Band is over, and people are just hanging out. If you’d like, you can try talking to Ben, but if my last conversation with him was anything to judge by, you might leave a little bewildered.

At that point, I gave up and stalked him on Facebook to find my answer. I then tried to elicit some information about his MIT-related activities, and about what he thinks of French House.

Me: Could you tell me about the MIT-related activities you do? I’m writing a blog post.
Ben: I go to MIT. I am a student there.
Me: …
Ben: I always take more than 36 units of classes, so I am a FULL-TIME student there!
Me: …
Ben: …
Me: Well, you do varsity fencing, right?
Ben: Yes.
Me: Since you got here?
Ben: Yes.
Me: Did you do any fencing in high school?
Ben: Yes. But not MIT varsity fencing.
Me: What about fencing here do you like?
Ben: Everything.
…

I tried one more question.

On second thoughts, maybe you shouldn’t talk to Ben. Instead, talk to the girl next to him: Adrienne, a sophomore from San Diego, who’s majoring in Course 9: Brain and Cognitive Science.

Adrienne was on the MIT sailing team last year, is now doing EMS as a third rider, and UROPs in the Littleton Lab, where she is studying “synaptic transmissions, specifically complexin…with fruit flies.”

In her free time, she can be found baking, doodling, drawing, and reading.

Ask her about MIT!

“What really sold me was the people. You can literally find every type of person here…and no one really cares what type of person you are. They’re supportive and they’ll help you no matter what.”

Luis interjects from the hallway: “and they watch Disney movies with you!”

Now, ask her about French House.

“It’s my family. I can act ridiculous…like I am now (as she hurls a pillow at Ben). I always have someone to go back to. They’ll take care of me and I’ll take care of them.”

Thanks, Ben. It’s time to leave the lounge, and walk to the Maisonette: a living room-type space with couches, and a gorgeous view of the Charles River and Boston skyline.

One of the Maisonette’s inhabitants is Daniel: a junior from New Jersey, double-majoring in Courses 5 and 18 (Chemistry and Math), and minoring in 7 (Biology).

I advise you not to ask Daniel why he likes Chemistry, until you’ve had the chance to explore majors for yourself, since he will probably persuade you to major in it too.

Instead, ask about his UROP.

“I work for Richard Schrock, who taught me 5.112*. He won a Nobel Prize in 2005. He was talking about his research one day, and I went up to him and asked if I could work in his lab during IAP, and he said ‘okay sure!'”

“I’ve been working in his lab since IAP freshman year, and now I’m publishing a paper with him in March. He also got me my job last summer (he has a collaborator in France), and I got two papers from that. So, yeah, Dick has been really helpful: I really feel like part of the lab. I give group meetings just like the grad students. Everyone in the group is in charge of making sure one thing is working at all times and I’m in charge of the HPLC.”

“High-Performance Liquid Chromatography. It’s fun. I like my UROP.”

What exactly is he doing?

“I solve problems. Like, my current project has lots and lots of applications…the original instantiation of the project is I can get these commercially important compounds from seed oils instead of petroleum, and the project I just started (that we’re going to publish about soon) is about being able to separate cis and trans alkenes, which is important because there are a lot of compounds that you can only make in percents, but it would be nice if you could have them in pure mixtures. So right now my project is a way to do that…and it works really well.”

You should move on from talking about his UROP, because otherwise you’ll be here forever. Ask him about fencing.

“FENCING! The best sport in the world.” He adds a bit of explanation, and concludes with: “also, who doesn’t love swords?”

There are a zillion other things you could talk to Daniel about: his musical performance in Jekyll and Hyde, tour guiding, helping another French House-er (Julie ’11) write her musical, tutoring…but you probably don’t have all day.

I’m a big believer in getting to know a living group through getting to know the people who live there, and that idea formed the basis for this blog post. However, another way to get to know MIT dorms is through their i3 videos. Elizabeth (who you met) just finished making one for French House, and you should take a look ☺

Keep an eye out for 3:49, where I deliver a personal message to all prefrosh out there.

Please feel free to post any questions you have about our awesome living group in the comments section! You can also e-mail me personally, or any of the people I discussed above (for example, if you want to ask Daniel or Ben about fencing, or want to ask Elizabeth about MITSO, or want to ask Davie about acting and singing and studying insects).

Come visit us during CPW :)