My high school didn’t have the broadest range of athletic options, so I’ve always been excited about finding new rec’ stuff to try out in college. Besides, as in the good ol’ childhood times, it’s always fun to meet and get to know people by playing games.

It’s no secret that MIT is not an athletic giant – for one, Briggs Field conspicuously lacks a shiny football stadium. Nevertheless, I was surprised to find MIT more “jock-y” than I expected. So many students play varsity sports, and discussions about various practices and games span classroom chatter and advising seminars. The general scheduling rule here is classes from 9-5, sports from 5-7, and other activities from 7-later. Students are dedicated. One of my suitemates is on the Varsity Field Hockey team and attends to a hockey-related event almost every day; for hours at a time. And it’s always refreshing to see people get up and leave during classes for athletic commitments. Even better, some of the highest-achieving teams here (like crew or sport taekwondo) are completely open to walk-ons and beginners. My impression is, there are plenty of chances to play if you’re willing to dedicate.

But to get to the semi-main point of this entry: DODGEBALL!

—
It might be kind of pathetic that I’ve never played dodgeball in my entire primary and secondary school P.E. career, but that’s what college is for right? So three weeks into MIT, intramurals were set up, teams were made, and schedules began popping up. I joined team tennis (I had played in high school) and dun dun dun – dodgeball! (because it’s both foreign to me and involves less running). Tennis has yet to start, but we’ve already completed three dodgeball games.

Intramurals (IM) here involve all different groups of people affiliated with MIT: fraternity brothers, graduate students, cultural or religious student organizations, dorms, etc. My team is called the Burton 1 All-Blacks (Yea, like that passionate New Zealand Rugby team, and well, we live on Burton 1 – the first floor of the Burton side of the Burton-Conner dorm. To live up to our name, we wear all black, and have a somewhat-prepared, sometimes-performed war dance. ‚ò∫

While Dodgeball is played in the Z-Center – a central fitness complex on West Campus – its exact location is very well concealed. After three flights of stairs and at least five double-doors, you will find MAC courts, a multi-purpose arena with basketball hoops and enclosed by 10-feet high transparent plastic walls. 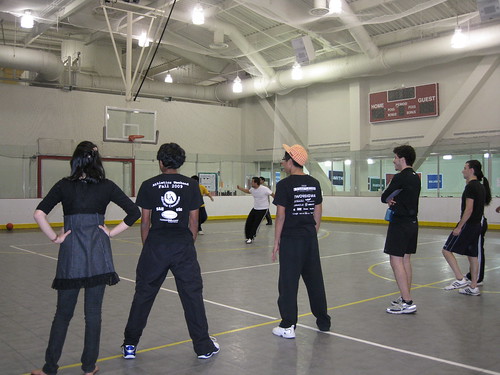 Burton 1 All Blacks on standby, waiting to go in the game; @ the super-exclusive MAC courts

Dodgeball itself is a peculiar game. The concept is elementary, really – you either hit someone with a ball, or dodge a ball thrown at you, catch a ball to take out the thrower, or deflect a thrown ball with a ball to keep the game going. But regardless, everyone gets so into it! Bam! Bam! Bam! Auuuhhhhhhrrrrrahhhhghh!

Come to think of it, dodgeball is really like recess. Considering the typical MIT day, when midnight really means mid-day, a 10 PM dodgeball game is the prime opportunity to undo all the stress and in-activity accumulated over a day or days. Yelling, jumping, falling, playing – like little kids. And at the end of it all, we shake hands, cheer for the winning team, trek back to the dorm, and promptly disperse to rejoin our p-sets. Sweet.
Here’s a quick video to visualize the mayhem.

P.S.
At 8:30 PM yesterday, I finished my first salad meal…ever! [Half-influenced by my salad-eating suitemates; half out of guilt for consuming pastries and whatnot for dinner the night before. 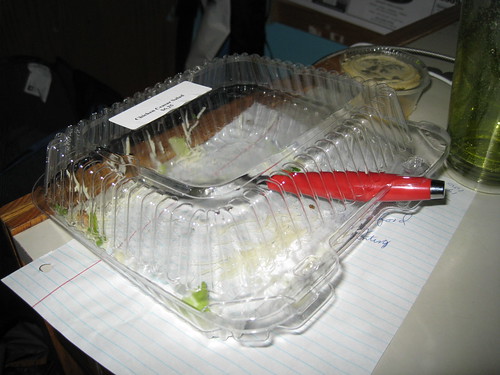