Hello everyone! I thought up this title as a metaphor for how the week a few weeks ago hit me, but apparently said week hit too hard for me to actually write a blog.

Life has been good, but busy. I’m taking five⁠01 well, 4.66, as in 5 until mid-April and 4 after that. But that’s a discussion for a different blog. classes this semester, UROPing, and working on my novel. My classes have been the main thing⁠02 the secondary thing = a newfound appreciation for sleep. on my mind, and I’ve been meaning to write a schedule post for a while. Forming this list has helped me remember the things I like about my classes, the reasons I’m excited to take them.

I’m on campus for the first time. The novelty of that comes in waves. I love getting to know more people — not just my podmates, who are lovely, but people on my hall⁠03 Like Alan! , and friends who walk with me after in-person classes. I wander alone down the Infinite every weekday, slip into a touchdown space to listen to a zoom lecture before in-person recitation. There are other people in the touchdown room, listening to their own zooms, and I wonder who they are, what we would say to one another in a different world.

I’m hungry for the real world, which feels less real and more ideal all the time, and I’m holding out hope for May or June or fall. Until then, here’s what I’m doing:

Eugene Delacroix’ Lady Liberty Leading the People, which is in fact about the July Revolution in 1830

We also have in-person recitation, which I’ll end this blog on. 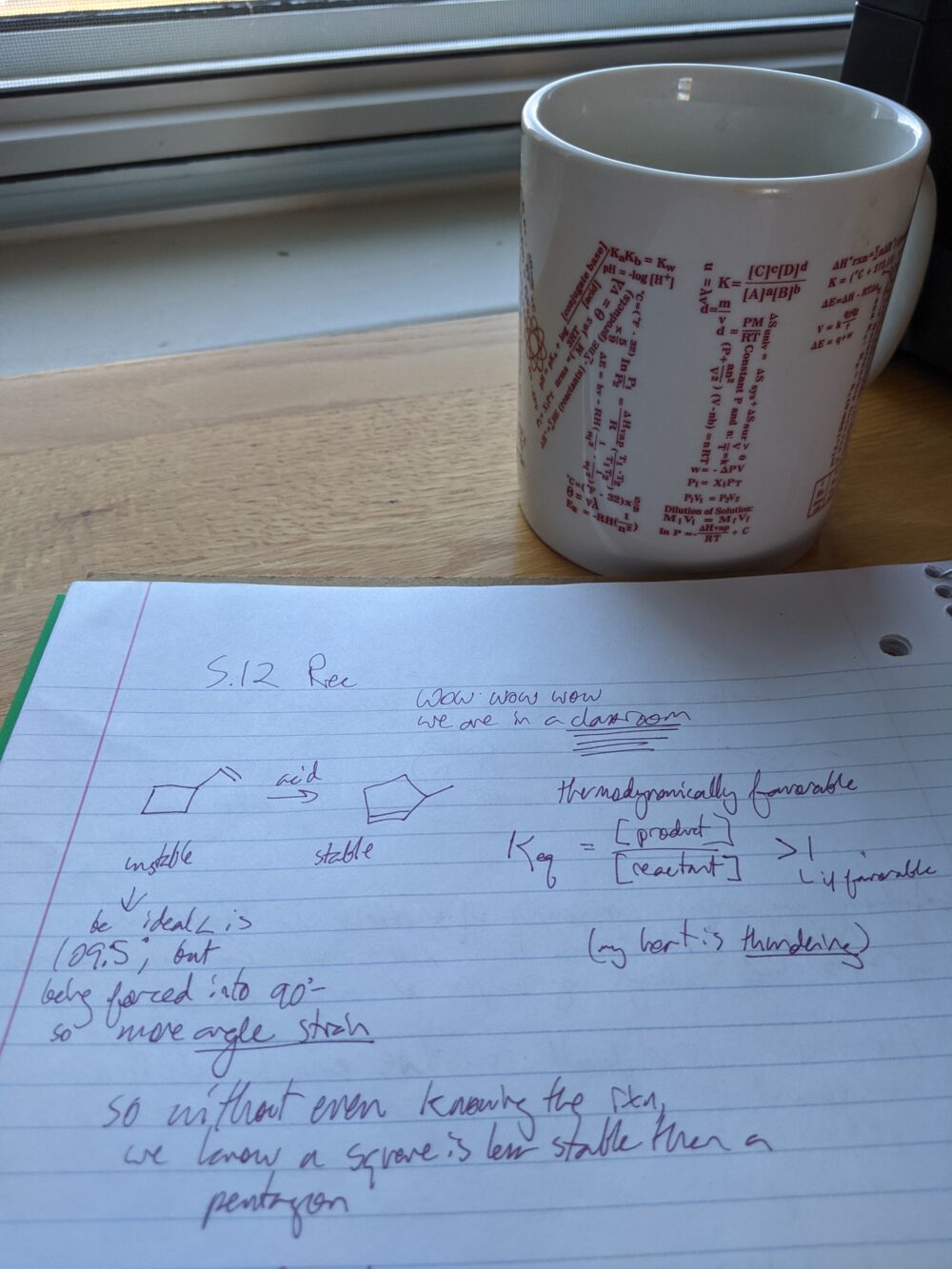 My notebook from the first day of in-person class. To translate my messy handwriting: “Wow wow wow we are in a classroom. [pentagon carbon structure] is stable, but [square carbon structure] is unstable because the ideal angle [between two atoms with tetrahedral geometries] is 109.5°, but [the square one] is being forced into 90° — so more angle strain. So without even knowing the reaction, we know a square is less stable than a pentagon.” There’s also an equilibrium equation that you may recall from AP Chemistry.

I arrived a few minutes late and looked around for an empty seat (or rather, for enough empty seats that it was safe to sit down). The ten or so students were spaced far apart, and the seats rose like an auditorium in miniature. I slipped to the back and opened my backpack, pursing my lips at the sound of the zipper. A friend I’d met on Discord turned and waved.

“Wow wow wow we are in a classroom,” I wrote, as I looked around the room, trying to match masked faces to thumbnails from zoom. “My heart is thundering.”

The TA began to lecture, projecting his voice, since we were spread so far apart. He made actual eye contact, and chalked diagrams on the blackboards, the three-layer ones that slide up and down, like we’d seen on MITx.

The room was cold, my hands were freezing. I was leaning sideways in my seat, the way I always did in high school, trying to fill space that was designed for someone slightly taller. Being in person felt familiar in a way I didn’t expect, like when you come home after a season away and try on the clothes you left behind; they belonged to someone slightly different, but they fit just as you remember.

“We’ve been talking about a lot of science,” the TA said, midway through class. “Let’s take a break and learn how to draw chair structures.⁠14 which is a way of drawing cyclohexanes (ie carbon hexagons). Now, I used to draw them like this,” he said, and scribbled a chair structure that looked exactly like the ones in my notebook.

I smiled sheepishly behind my mask. The TA explained how sloppy chair structures don’t convey information as clearly — you can’t draw functional groups⁠15 like, stuff on carbon structures that is not carbon, such as OH and N. Functional groups are more reactive than C, usually, hence they are important. on the chairs without them overlapping. I looked at my chairs, all too narrow or slanted. I drew more and more, filling the margins, trying to make them good, as the lecture swung back to science.

I spent more on this one diagram than I do on any actual notes.
some clumsily drawn chairs