except for the wings, the engines, the flight controls…

You may have heard of the MIT Flying Club, which I’m not actually active in.  (I learned to fly pre-MIT and probably won’t have much time to fly until post-MIT – in the meanwhile, I’m mostly spending my time taking advantage of opportunities I didn’t have at home ^_^)  In any case, I am on their mailing list, because they are awesome and frequently do awesome things.  Like putting this in the Z center (our humongous campus gym): 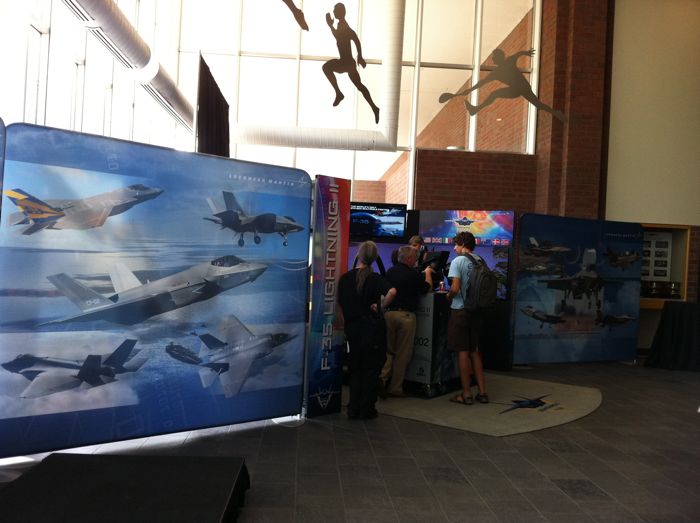 It was an F-35 simulator, and I was SUPER STOKED upon signing up for it.  It sounded pretty shiny.  In classical me mode, my first thought upon hearing about it was “I WONDER WHAT HAPPENS IF YOU CRASH THAT THING.”   Since I make regular practice of not crashing planes I fly, I figured a simulator is a good place to do it.  Until I saw a shiny, shiny pin that one of the MIT Flying Club members was wearing…

“Whoa, they give those to you?”
“Only if you don’t crash.”
“NOOOO I WANT MY EXPLOSIONSSSSS!!!”

But man, the pin sure did look shiny.

Very, very suddenly, it was my turn. I handed my phone (man, why didn’t I think to bring a real camera?) off to my boyfriend, climbed into the “cockpit”, and oriented myself to the controls.

First thing I noted was that it was different from the Cessnas I was used to. A stick instead of a yoke, and my steering/throttle hands were switched. Once the simulation started, the second thing I noticed was DANG THIS THING IS SENSITIVE. I was used to rather dramatic movements to get a tiny Cessna to move. These controls… were amazingly sensitive, which is unsurprising given that they crammed many more horses into its engine. 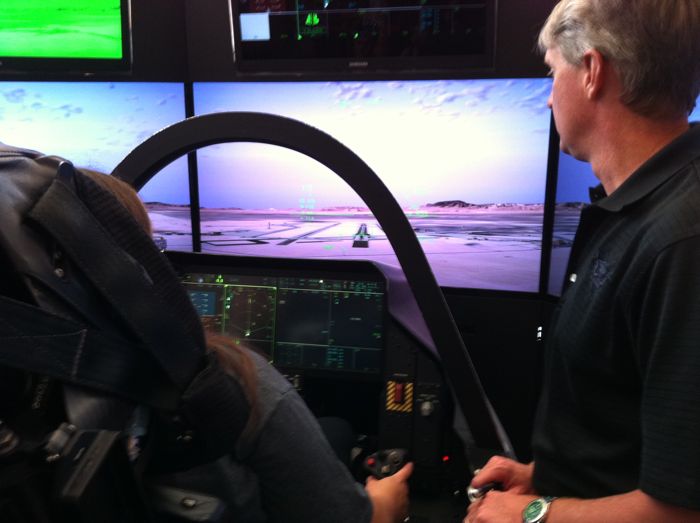 ^ That’s me, an approach to the runway, and a guy telling me vital things like, “You want to be going about 145 knots to land in this plane”. Lower the landing gear. Don’t worry about flaps, there aren’t any in this plane. Keep for the runway. Power back, slow down, flare…

And earn the shiny pin. 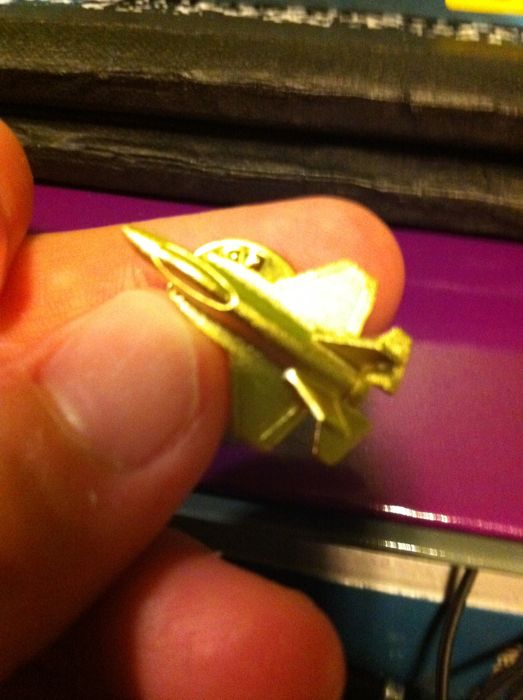 They were also letting everyone take shiny posters and stickers.  My agenda is now decorated… 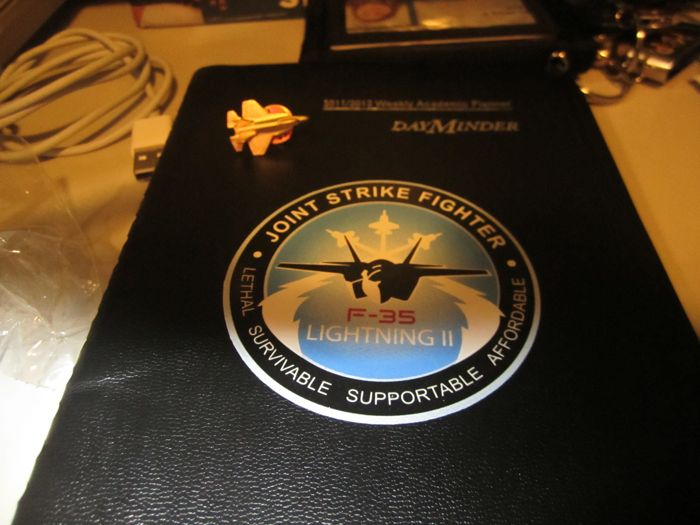 As I grabbed some freebies, I noticed that they had a second simulator off in the corner – not full-bodied and without a rudder, but neat nonetheless – where I then realized my dreams of stalling and crashing the plane repeatedly into the ground. I am sad to say that there was no massive video-game-esque explosion at these crashes (you just pulled up and continued to fly), but I did get to see targets explode off on the horizon. It was around then that I realized, whoa, these are one-seater planes — you can’t fly them with an instructor.

It’s almost like simulators were created for this purpose.

And… that is another bite of my life at MIT.

As has been a frequent disclaimer lately on this blogs – and should really always be assumed to be true – you guys are more than welcome to ask questions of us bloggers, be it through comment, email (see the bar above, we all have ’em there), carrier pidgeon, smoke signals, etc (though, I don’t know how to read smoke signals).  I will say that, no, I will not read your application essays.  But I have and will tell you about life here, and why you shouldn’t be driving yourself crazy over the application process ^_^

See you next time.