Around this time last year, I was furiously wrapping two shipping boxes in Saran Wrap. Inside the boxes, I carefully loaded all of my clothes, my bedding, my shoes, the books I’d yet to read, my crochet hooks, an umbrella, and my signed Rufus Does Judy at Capitol Studios poster, which I framed and padded with my winter coat. Then, in a thick black scrawl, I wrote my full name, my flight number, my phone number, and a destination address, which at the time was 229 Vassar Street, Cambridge, MA 02139.

My flight was set to leave in the morning from the B terminal of the Nashville International Airport, which was a foreign place that I’d yet to navigate on my own. At the ticket counter, I said goodbye to my parents, and my mother handed me a package of peanut M&Ms and an envelope to open at the gate, which contained photos of my parents, my sister, my cat, and my friends. When they left, I lugged both cardboard boxes to the counter and checked them onto the flight.

I’m not a very sentimental person, but as I loaded my backpack and laptop and shoes onto the conveyor belt at security, I was fighting tears.

At the gate, I sat in a chair facing the window, and I began crocheting. If I remember correctly, I was working on the beginnings of a burgundy beanie that would keep me warm in an entirely unknown and frightening Boston winter. I was in the last group to board the plane.

When my group was called, I stood up and made my way toward the back of the line. Still sitting in his chair, a boy in an MIT sweatshirt nervously fiddled with his water bottle, which was covered in multiple layers of stickers. A woman who I assumed to be his mother pointed out the window to the airplane, which would act as the small, worryingly run-down vessel that would carry the three of us to Boston.

I talked to the boy for a moment, running through the conversational protocol you quickly learn when you’re headed to MIT. I asked him what his FPOP was (Pre-Health), where he was from (Decatur, he drove up to Nashville for the flight), where he was living (Simmons, the same as me), and what floor he was on (3AB, a few doors down from my room). He was warm, but nervous, and he talked in a cadence I had never heard before (fast, especially for the South, speckled with laughter).

He sat a few rows behind me and to my right, and I remember glancing back at him while the pilot came over the intercom to tell us there was a temporary and fixable issue with the engine. His head was already on the window, earbuds in.

When I arrived in Boston, I had the daunting task of retrieving the boxes from the oversized section of baggage claim and hauling them into an Uber. It was my first time in an Uber, and the interior of this one was decorated with emblems from the Navy Seals. A pair of handcuffs hung from the rearview mirror.

Boston is a very small city, but from that window, I’d never seen such a massive place.

At the entrance of Simmons Hall, the movers took my boxes, and the desk worker gave me my key. Coincidentally, the room I was placed in (I later moved up to the 8th floor in C tower), was the room he had last year. He opened the door for me, and the movers set the boxes down, and I was alone.

The room was L-shaped and about 1,000 degrees, which I would have to deal with for the next month or so. Drenched in sweat, I tried to unbox my bedding and put it on a bed (my roommate would arrive in about a week). I gave up when I got onto the fitted sheet phase, and decided to go downstairs and ask someone where I could eat nearby.

Instead of telling me somewhere reasonable, like La Verdes or Saloniki’s or Dunkin, this person told me to walk to Singh’s Dhaba, which was a solid 25 minute walk down Mass Ave. Because I had no clue about the concept of Mass Ave (long street, keep walking straight and it’ll be there), I used Google Maps, which took me on the most roundabout journey through the neighborhoods of Cambridge. By the time I actually got to Mass Ave, I saw a Target, so I decided to just get snacks from there and turn around.

When I got back to Simmons, I couldn’t get into the building. The security guard informed me that he would not let me into the building without an ID, even though he admitted that he saw me come into the building earlier. I asked him if I could just drop off my groceries in my room, and he said no. So, I left the bags of groceries to rot in the lobby, and I turned around to get my ID from Killian.

When I came back, I tapped into Simmons, grabbed my lukewarm groceries, and started walking to my room. I was about twenty steps from the front desk when the security guard yelled again and asked me where my Covid test was.

I asked him where I needed to get tested, and he told me the Z, which is literally thirty seconds from where I got my ID. So, I turned around again and made the long trek from Simmons to campus. There, a student watched me awkwardly shove a swab up my nose for the first time. I set the vial in the tray and walked back to the dorm.

Finally, beyond pissed off at the security guard, I was allowed to get to my room.

When I realized I wasn’t going to fix it on my own, I knocked on the door to my left, which was a single that belonged to an Interphase student. She didn’t answer. Then, I looked out into the hallway. The only person I could see was in the far right corner, a boy with extremely short, dark hair. He looked too busy for me to bother him.

At this point, we were supposed to report to Killian to meet with our FPOP groups, and I was so defeated with the bathroom that I grabbed my things (my room key and ID on a lanyard, which I cringe thinking about) and started to walk back to Killian.

Underneath the tent, there were hundreds of first years, laughing and talking and sitting together. At this point I should mention that I knew nobody, and I mentally wagered whether I should walk up to a group of people and introduce myself. I decided that I shouldn’t, and instead I wandered around the tent trying to find my FPOP group. There were massive white signs that said each FPOP name (forty kids surrounding DEE, another fifty surrounding DME), and I could not find DUSP. Turns out, the student leaders of our group (who I now love to pieces and am forever indebted to their friendliness and warmth) were incredibly late, so we had no sign. After about five minutes of looking like an idiot, I found a small group of people sitting alone in the middle of the tent. This was the group.

The group was friendly enough, but in an incredibly awkward and nervous way. Each time another person showed up to the group, we’d go around and introduce ourselves all over again. After about fifteen minutes, a girl showed up to the group, and she asked me if I’d follow her to the bathroom in Killian. I had no idea who she was.

Per her instructions, I waited outside the bathroom stall. She complained about how she had grass stains on her shorts, and how it was so sweaty outside, and how she had another friend following her around that she wanted to escape from. We laughed together and exchanged phone numbers. Then, we ate shitty catering food, and I visited her room in Baker (a miserable double forced triple, which would stage the majority of August and September for me). She came back with me to Simmons, and I told her she could shower and sleep on the other bed. For a moment, we agreed to room together in Simmons (this never worked out, and we both found incredible friends in our respective halls).

I spent the next week sweating through my sheets at night, eating questionably soggy apples from the Target trip, and waking up early for my FPOP, where I met some of the most incredible friends and professors (besides the girl in the bathroom stall, I don’t talk to the rest of the FPOP much today, but I think about them often).

Still, I was pretty lonely. I missed home, I missed my friends, and most of all, I missed feeling entirely comfortable. I’m writing this mostly to document how far I’ve come (Now, I have a group of friends who I’ll see the day I get back to campus, and I have a room all to myself, and my boxes of things will be there when I get there), but also to tell the nervous first-year reading this that it is not easy, and it shouldn’t be. MIT is a colossal change, and if you’re fully experiencing it, there should be some heartache and awkwardness. It does get better, and god is it still so much fun.

This post is dedicated to some of my now closest friends, who you’ll see below. More stories on them down the line. 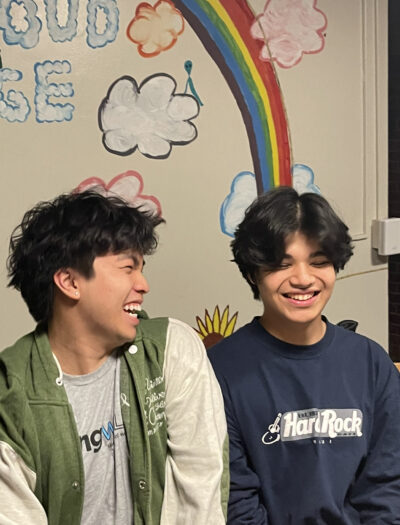 Franklin, the boy at the airport, who introduced me to my most treasured friends at MIT, and Rafael, the boy at the end of the hall, who I now know without a doubt would’ve dropped everything to get that bathroom door open. 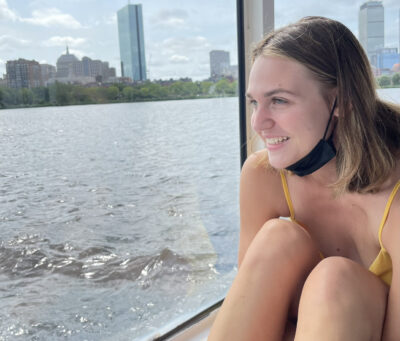 Olivia, the girl who dragged me into the bathroom without knowing my name and showed me that the best of friends can form in the strangest situations.