making space in my schedule to go to the maker space by Waly N. '24

and 100 other things I was bad at this semester

Welcome to the first of the many blogs I have meant to write but just not had the energy to do so this semester! Let’s get right into it…

In December 2020, I learned about the MakerLodge training that first-years could participate in, and I immediately did the online portion of the training. For this, you had to do different modules based on which track you chose to learn for the maker space. Just for reference, I was doing the digital fabrication; there was a manual fabrication training that was pretty different. In digital fabrication, you learn about 3D printing and laser cutting. In manual, you work with drill presses, band saws, other hands-on things.

The modules went over safety procedures, like what you should and shouldn’t do when laser cutting. Each featured some videos, text, and a quiz. It wasn’t too tricky, and a lot of it was based on common sense, like DO NOT put your hand inside the laser cutter. The second part of the training was an in-person event that students could do once they got on campus.

I registered for one of the first in-person trainings because I knew that I would never do it ultimately if I didn’t do it immediately. My session was during mid-March, just after the campus was opened to students after the week-long⁠01 this was a scam, it was 10 days long quarantine after move-in. As an inexperienced froshling, I got very lost trying to find building 6C,⁠02 the building Makerlodge is in, the Deep, another maker space, is in building 37 which is pretty weirdly located to me. Even though I know campus much better now. I arrived about 15 minutes late, but luckily Makerlodge staff was lovely :)).

Basically, the in-person training had a few stages, with about 3 of us first-years there. First, we worked on 3D printing, and we learned about what was 3D printable and what would require lots of support material and would be a pain to make. Then, we got to 3D print something of our own! We didn’t make it ourselves (due to time constraints), so they gave us a choice of making a chaos cube⁠03 a cube with sides that say things like creative, chaos, controlled, etc. or a cute beaver. I did not hear about the beaver option, so I ended up making the cube. We took the 3D model given to us and then used software to slice it up for printing. Afterward, we loaded it onto a USB drive, and fed it to the printer, and waited the needed 40 minutes to print. In the meantime, we learned about laser cutting. 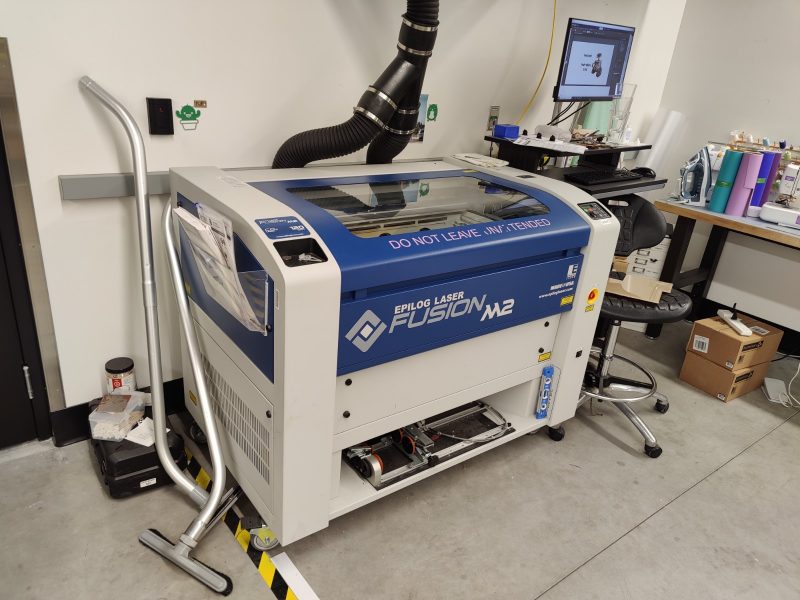 The laser cutting tutorial started by teaching us how to use Adobe Illustrator, which is one of the many software programs you can use to create laser-cut patterns. Next, the instructor helped us make designs we wanted to laser cut, which we spent about 20 minutes working on. When you make a design, you have to make lines of different thicknesses and colors to indicate to the printer which parts of the design are raster prints (basically tracing the design into the material) and really thin lines, which are the parts that should be entirely cut through the material. 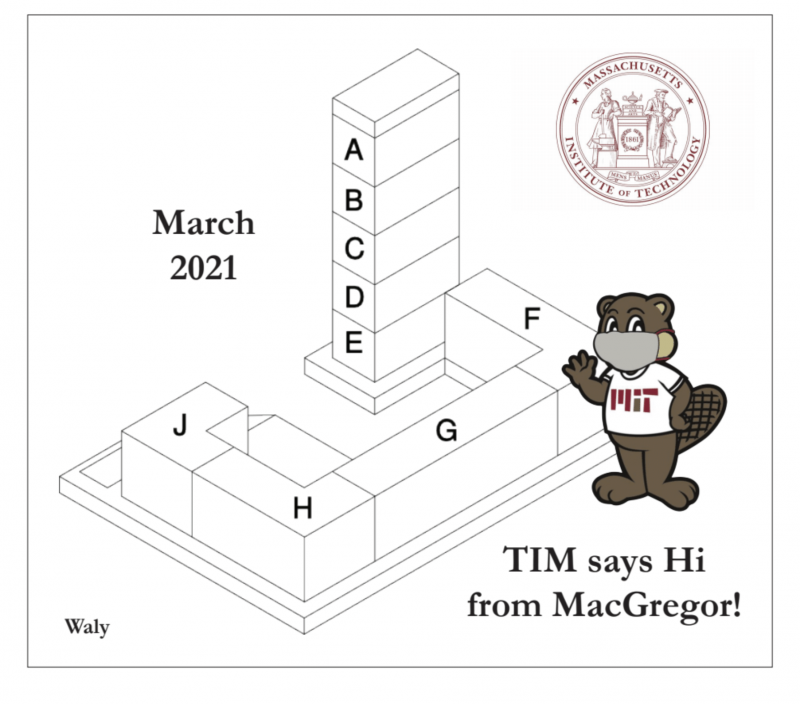 a design I made after orientation for another visit

Afterward, we picked what materials we wanted! There was a choice between wood and acrylic of many different colors. It took a couple minutes of thinking, but I chose a clear acrylic to laser cut on. I was the last of the 3 of us to go, and the training was wrapping up.

With help, I went through the procedure of sending the print job to the laser cutter, placing the material, focusing the laser cutter, and doing a quick test run. Everything went well until when I started to print, and the laser cutter kept messing up. It would trace the wrong lines and not fully cut out the design, making it impossible to get out. We spent a lot of time troubleshooting, to no avail.

As is standard procedure in Makerlodge, I submitted a safety/repair request into the appropriate bin. Then the instructor, helped me use another laser cutter to print my job. It took a bit of time, and I remember that I stayed about 20 minutes past the end of the session, but they didn’t mind at all and were terrific. So I got a rather dandy end result if I do say so myself. 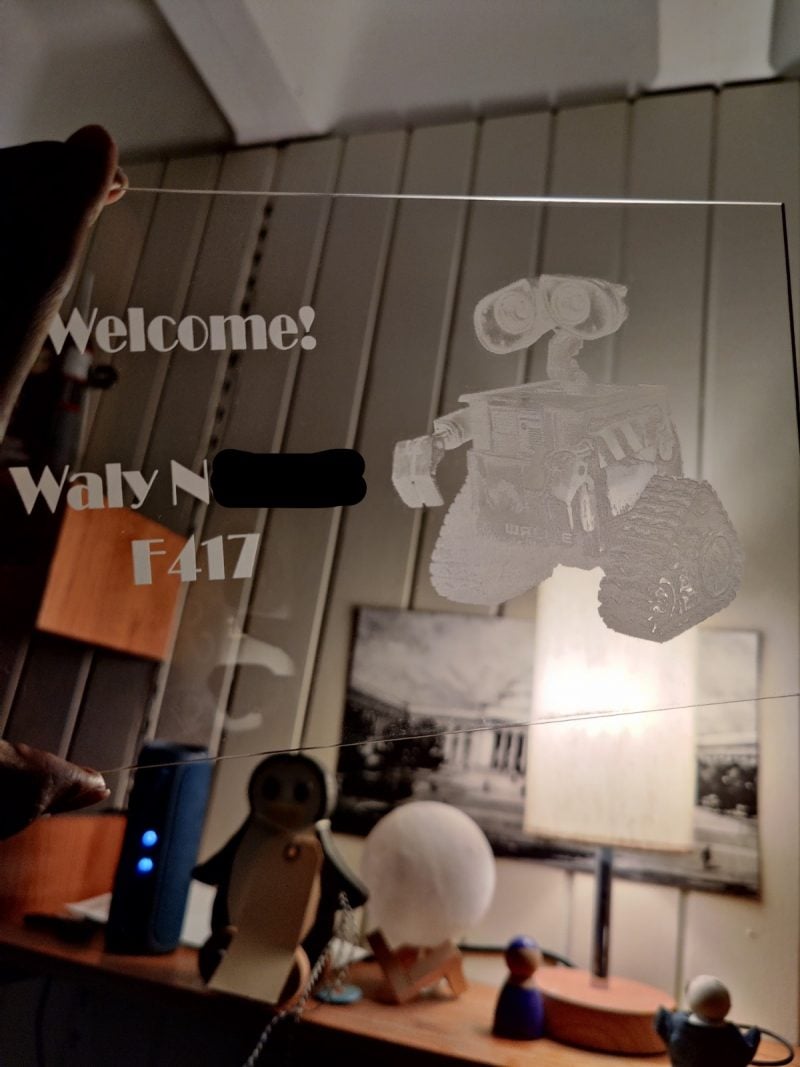 Afterward, I planned to go to the maker space every week of the semester because the training was one of the most fun experiences I had had so far in my MIT campus experience. 2 weeks later, I came back to print that earlier seen design I made, which I used blue acrylic for: 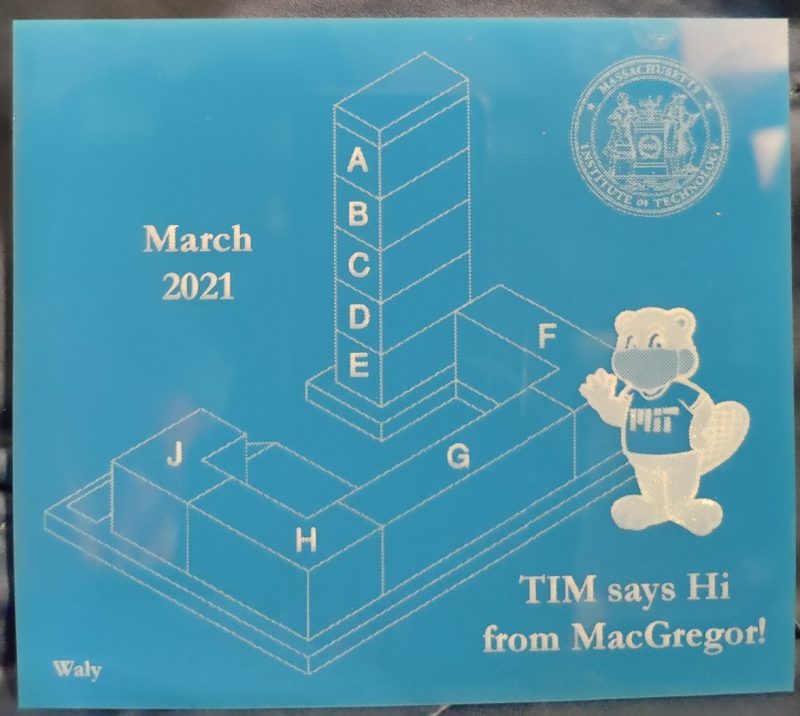 The Makerlodge at MIT is really great because it can serve as an excellent introduction to maker culture and allows you to get dirty in hands-on work. I really loved getting that hands-on experience there! Though you had to choose between digital or manual fabrication, you can get ‘checkoffs’ for equipment in the other category you didn’t do. Basically, you get taught to use them, and if you already know how to, you just prove you won’t somehow maim/kill yourself by using them!

And so much of it is free!! You can 3D print using white ABS plastic for free, and you get some ‘makerbucks’⁠04 currency to buy goods at Makerlodge to use after your training if you want to use other filaments. The material isn’t free for laser cutting, but there is a bin of partially used material which is! And the materials are usually pretty good; I got both of my acrylic pieces from that bin!

In the end, my plan of going every week to the maker space didn’t come to fruition. Covid Quarantine happened, and to be honest, everything in the semester started going downhill at that point. I couldn’t find the time or energy to go to the maker space. Probably one of my biggest regrets from the spring. But hey, there will definitely be chances to head to the maker space more in the future. Maybe I won’t even have to reserve a time slot anymore :O. Till then, I’ll have some socks I won from a raffle (for those who submitted safety reports) to remind me of the pleasant times spent at Makerlodge this semester. 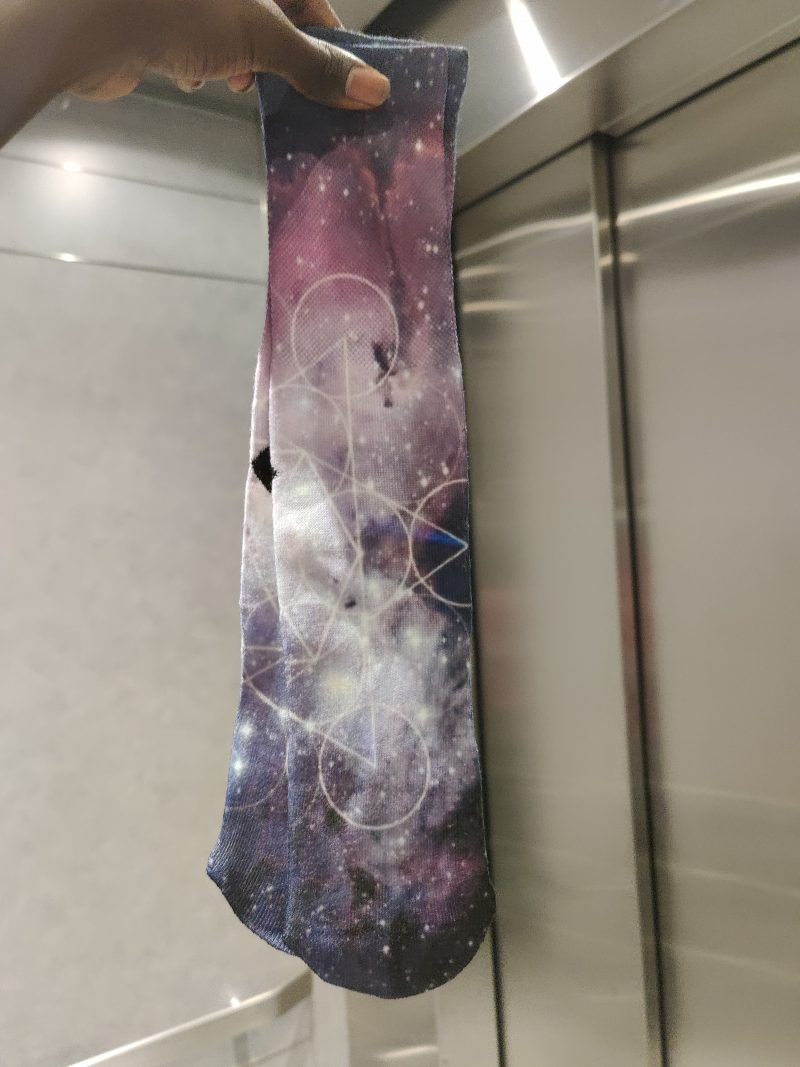