I’ve been hesitant to write things since my mind has been a bit of a mess lately. Aidan described IAP as some strange purgatory, where there’s a feeling of too much and not enough going on. During the days where I have things to do, I feel happy and fulfilled. IAP is truly what I make of it and the power rests in my hands.

I maintained a pretty solid routine for the first half of IAP, going to the gym consistently and eating food I got off of Raymond and Aiden, two absolute saints who are basically the reason I didn’t starve to death this IAP.

Once it hit 11am, I would walk to the MIT Education Arcade where I met with my UROP advisor and my other fellow UROPS to work on research for our project or plan and design a couple of things we needed for our research experiment. There, I would sit with the other employees in the lab, or just simply observe as they played fun games like Dungeons and Dragons or Codenames. It was absolutely surreal to me that I was getting paid to sit in a place that generated so much joy. I love my UROP with my whole heart — it made me realize that I did make the correct decision in leaving my old UROP and come here instead.

But then there were days of IAP where I felt a little less than human. I would wake up at 2, and while I didn’t mind this that much because it was nice and cozy and warm and good, I would feel all sense of motivation lose my body. I would somehow will myself to trudge over to Stud5 to try and get some semblance of work done, before it was already 6 and I’d head back to Random to eat, watch some movies with some friends, and stay up until some ungodly hour, just to repeat the whole cycle all over again.

I think IAP for me hasn’t been as nice because I have too much time alone. There’s not enough hustle and bustle to keep my mind occupied. I was once told that I wasn’t “intellectually stimulating” enough, which has, frankly, stuck with me for a bit. And so there are times where I ask myself: Am I doing enough?

It’s a common dilemma we find ourselves. When we have things to do, we are stressed and constantly occupied. The moment those stressors disappear, we’re still distressed because we now don’t know what to even do with ourselves.

Every moment feels like such a waste. But I’ve been getting a bit better with just sitting with my thoughts. A couple nights ago, I just sat on the couch of Loop lounge and listened to Aiden try and learn piano. The blaring of jumbled, frustrated notes was the soundtrack to my overwhelming amount of thoughts.

I’ve been thinking a lot lately. I guess that’s what IAP is for. I’ve had a few good cries this IAP, which is good character development for our developing sitcom⁠01 It's a running joke in our friend group that we're in a TV show because of the sitcom-like development of events that have happened in these coming months. It'll be on air one day. I'll make it happen. For now, I share our stupid journeys and quirks through here in hopes that someone will gain some interest and pick us up for a full 8 seasons. .

Every time I hear the word “internship” I spiral into a mess, almost drowning in all my anxieties that have been building for the past semester and a half. I’ve been rejected from a lot of places. I’ve been ghosted by a lot of places. I’ve got so many more places to apply to. And I’m just very exhausted and drained. I’ve probably applied to at least thirty or so places and haven’t gotten an offer from a single one. All I really want for this summer is to not end up back home. I know I could always get a UROP, but for me, getting an internship represents a lot more than just something to do over the summer.

I’ve been struggling a lot with imposter syndrome lately, especially taking 6.145. I found that I’m probably the least qualified to be a CS major out of my friends. The solutions just don’t come all that easily to me and though friends offer to help me, I can’t help but feel embarrassed every time someone even watches me or reads over my code. I tell myself that I’m a computer science major and that you just have to like what you’re studying to do it, not be good at it. And I try and repeat these affirmations every day but these past few weeks, as I watch my friends easily get solutions that I struggled for hours with.  I’ve been purposely avoiding asking for Raymond for help since he’s this bigbrained CS person in my head and I really don’t want to waste his time or brainpower on my code. He obviously noticed that I haven’t been asking for his help and asked why and all I could give was a weak shrug. Anyway, there’s obviously a lot here to unpack. Imposter syndrome, big doubts, fear of asking for help.

Along the lines of asking for help, I have an actual fear I’m going to NR 8.01L. The final is tomorrow. I’ve touched a little bit of the materials but have not been consistently studying. This class truly is the bane of my existence. I’ve been telling myself I’m not going to NR but honestly 8.011 isn’t looking too bad now honestly. I think I know physics but I don’t know how I’m going to do tomorrow. I’m terrified. I really just want physics done and over with. But I also need to remind myself that if I do NR, it doesn’t reflect poorly on me or who I am or my intelligence. But that’s hard. A lot of this is hard.

And finally on this long list of things that have been ailing me: body image! Really have been hating the way I look lately. I’ve been consistently working out, but here and there I skip cardio, and it makes me feel like, to be completely frank, shit. When I lack a routine, my gym routine also suffers and as a result, I’ve been slacking a bit. It’s not nice.

I’ve recently reworked my FireRoad schedules, planning it for a double major CMS/6-3 with a minor in 4. I’m still not completely happy with it though. I want to try and squeeze in a language in there somewhere.

For now, I’m going to try and pass 8.01L, secure this spring UROP I’ve had my eyes on, and write the other 10 internship applications I have in line.

For now, I’ll leave off with this meme that’s been really describing how I’ve been feeling this past IAP. The two States. 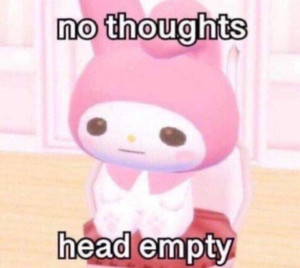 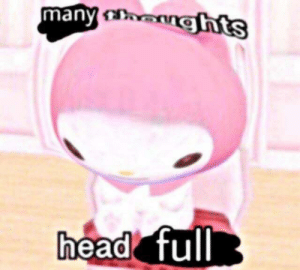