Life has been sprinting by these days, and I go through periodic cycles – making rounds from “Hey…I can do this…” to “OMG. This is impossible!” and back again. But true to my procrastinatorial roots, I can’t complete one cycle without getting distracted in between.

Well, there was Obama. And then BJ Novak – Heck, I don’t even watch The Office and I felt all giddy @ his comedy show. (Yes! He was here on 10/24, standing on the stage in Kresge, thanking Pres. O for a great opening act – he was one funny dude).

But aside from all those exciting diversions, I must blame my darn itchy hands for escaping necessary work+studying way too often.
—
1 AM on a Friday night, I decided to break out my art supplies and recreate an image captured on my little 2-megapixel camera phone several evenings before. You see – the walk down West Campus’s dorm row is a (weather-permitting) pleasant one, especially starting from Burton-Conner, where the frontal sight escapes from the tennis courts to a vast Briggs Field trademarked by the always-astonishing Simmons Hall and a wildly nebulous sky. The colors change from day-to-day, hour-to-hour in fact – one moment, all you see is a Claritin-clear blue, the next it’s all about a muggy purple. But the image on my phone encapsulates the singular instance when everything else is drowned out by the blinding rays of a familiar sunset.

I adore the sight too much not to enlarge, enshrine, and share it with the world. Well, five 1-or-2 hour sessions later, I can show you somewhat close to what I saw: 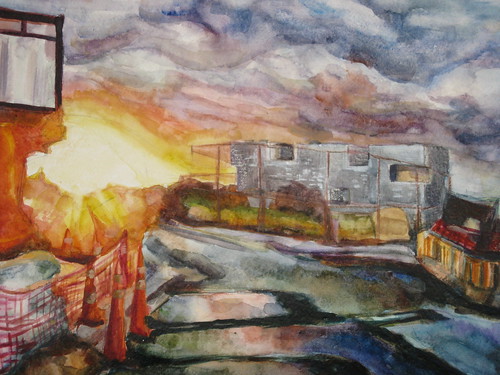 Sometimes, a paintbrush sounds so much more attractive than a mechanical pencil, and the ensuing distraction becomes a euphemism for procrastination.
—
2 Nights before my second 3.091 (Introduction to Solid-State Chemistry aka Chem. General Institute Requirement) exam, I betrayed my trusty iCal. The schedule blocked out that Sunday night for studying x-ray diffraction, cubes, semi-conductors, and doping…but I figured that iCal isn’t going to jump out of the screen and stop me from carving some pumpkins.

That night, the Porter Room (Burton-Conner’s now-defunct dining hall) hosted a warm-and-fuzzy pumpkin carving competition with gift cards to favorite vendors’ on the line. Even better, all the tables were prematurely equipped with Halloween candy. I must confess: I ate all the AlmondJoy’s at our table (there were 4 of them) and grabbed 2 more from another table. That was great. 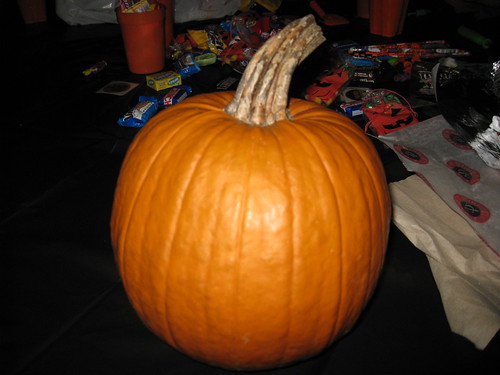 -all orange, round, shiny, cute, perfect!

Having never carved a pumpkin before, I was rather clueless. But someone gave me a knife and told me to carve out the inside. Still unsure, I timidly stuck a petite knife in: 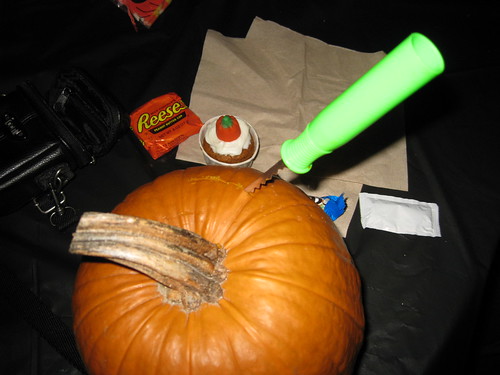 -and left it there…

Until killer instincts kicked in: 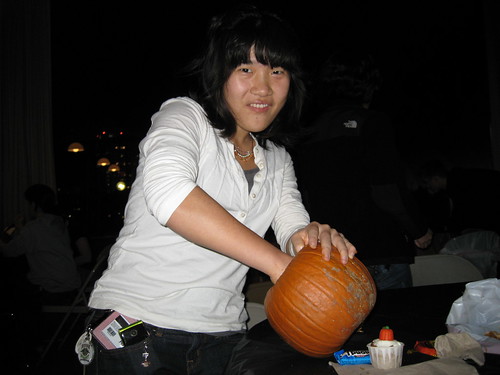 I had envisioned sort of a …crazy… hip-hop-man-beaver-with-fauxhawk pumpkin….WELL in the end, it turned out like this: 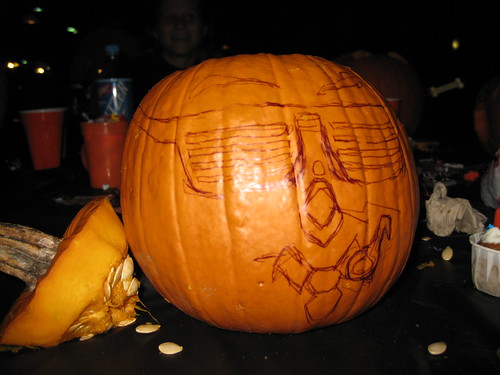 and after carving all I could carve within the time-limit, pumpkin man turned out like this: 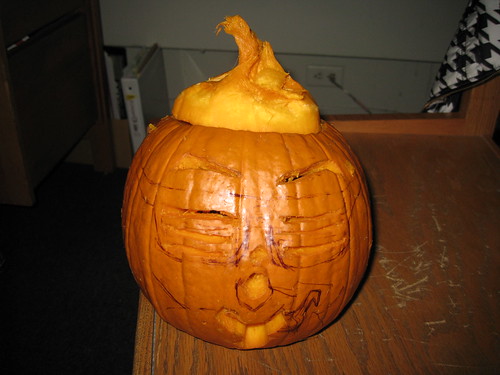 …with hair shaved in the pattern of “MIT” in the back: 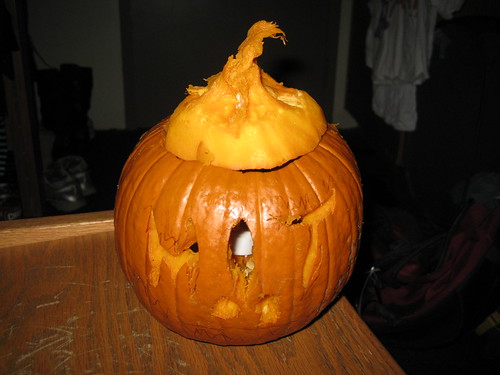 This would all look much better in dark with candlelight shining out, but as a first-timer, I did not consider that larger carved-out areas meant more light projecting out…SO FOR FUTURE REFERENCE GUYS – carve them big!

But here are some pumpkins by BC residents who obviously knew what they were doing – I was speechless at the sight of these masterpieces. 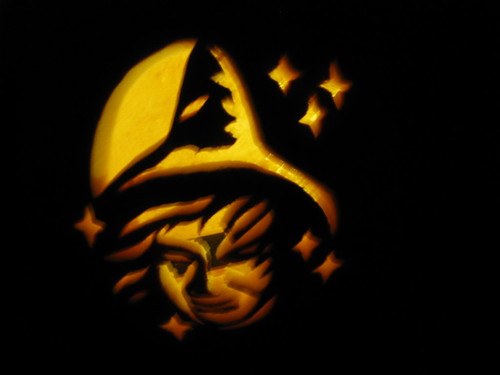 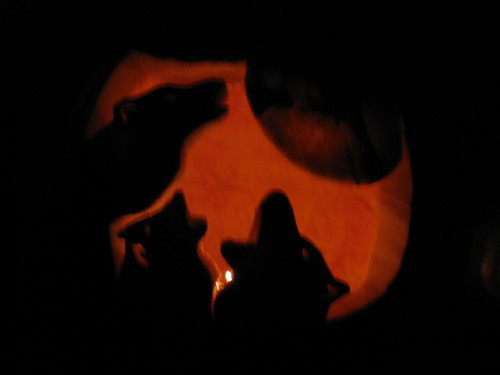 Do you see what’s in here?

To no surprise, these were two of the winners. [Excuse the blurry photography & credits (and crazy props!) to whoever carved these!]

Half-past ten,I left the Porter Room in sweat and pride, awe and admiration, and guilt for all those AlmondJoy’s and Snickers and pumpkin muffins…but everything added up to a jolliness that lasted into the AM. And boy – a pleasant mood in the wee hours is hard to come by around here.
—
3 Days before the real Halloween, I ordered various glow sticks over the Internet. If they arrive on time, my hands will be up all night figuring out a glowstickman costume for Halloween – or not. Who knows. Those mens et manus are fickle … after all, that’s how I get sidetracked in the first place. But glow sticks are fun for all occasions right?
—
MORE EXCITINGLY, 4 Mornings later, all you early birds will be free birds! Or you’ll feel above-the-clouds, basking in the sunshine for a little while…You’ve worked hard (so, so, hard – I’m sure), So after the initial wave of relief, please celebrate by releasing all that stress build up in your mind over the past few painstaking months!

Bake something, draw something, build something, sew something, take photographs, crawl through piles of fallen leaves, dig a hole, climb a tree, relax – play!

The sense of balance that follows is amazing. And the ability to find your own little oasis from time to time is important at MIT…

ALRIGHT you can snap out of that pristine serene dream now – breathe & take the final steps in the application – all the way past “Submit”.